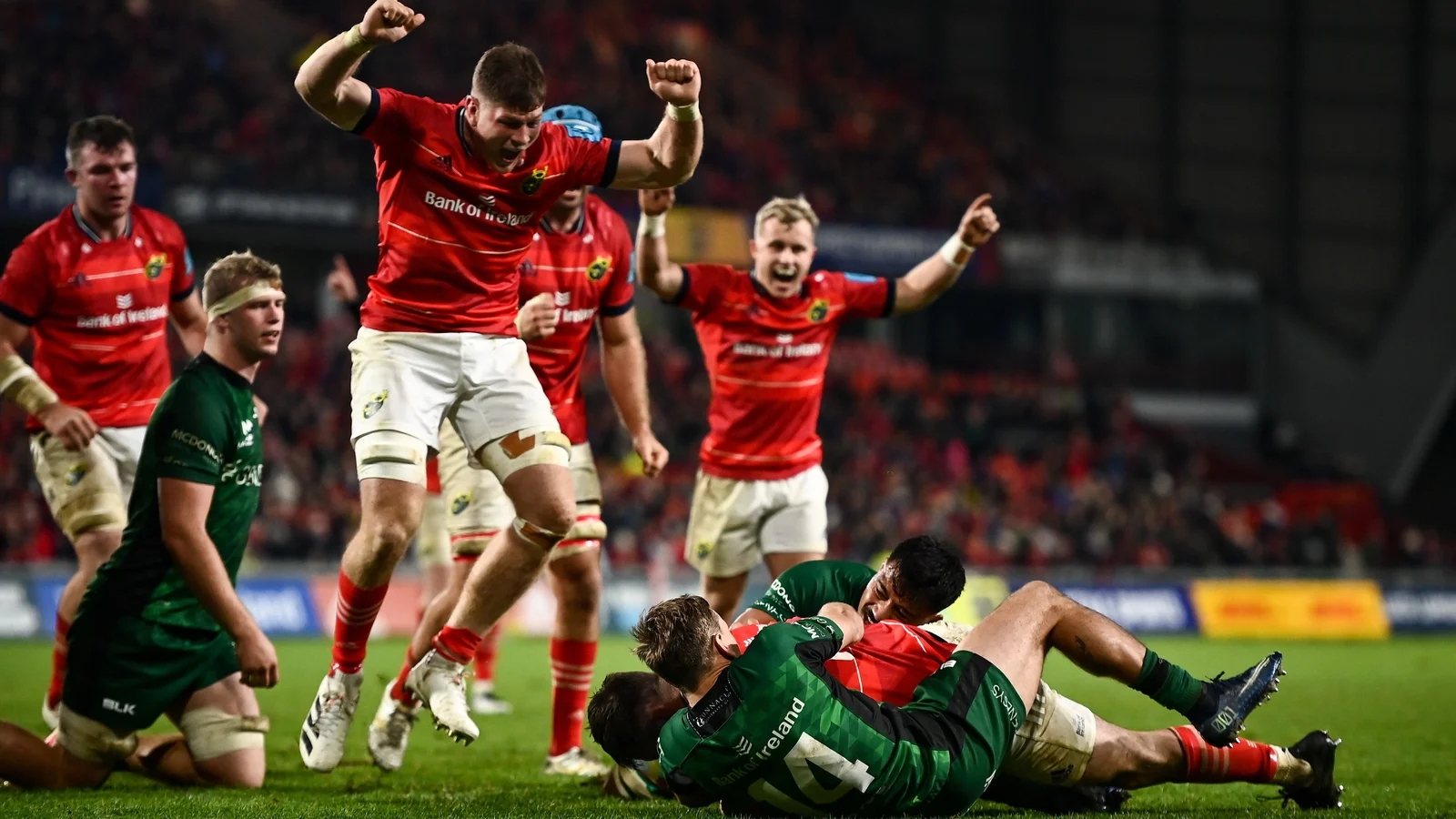 You can’t fake belief. It’s like trying to pretend you speak French to your friends but then run into a French person at the pub. When your friends say “ohhh, you’re French? Alan speaks French!”, baby, you’d better know how to speak French. At a certain point, you either know how to speak French, or you don’t. At a certain point, you either believe in what you’re doing and who you’re doing it with, or you don’t.

This Munster side have belief in each other. How far that belief will take them remains to be seen but, five points down with 10 minutes left on the clock after a charge-down try… this is the “ah, tu parles français ? Es-tu déjà allé en France?” moment in the bar.

So do you know French, or are you spoofing?

Right from the restart.

That prevented Connacht from kicking long and deep, which they did excellently all night. More on that later.

But that’s just possession won back from the restart – what did we have off the scrum?

So, no, Munster didn’t play well here. A lot of new combinations didn’t fire after a week off and a key member of the pack making their seasonal bow, the lineout didn’t function until relatively late in the game and there were sloppy errors to beat the band. But they had it seriously put up to them with 10 minutes left and they had the belief, desire and forward grunt to make something happen and snatch the win.

Belief – you either have it or you don’t and here, we had belief and composure when it mattered.

There was no doubt in my mind that Connacht would show up to this game, physically and mentally.

They were on and could have easily won with less than 35% of the possession and 41% territory. How did they get so close despite that two general stats? An incredibly effective long kicking game, an element of riding their luck and taking their chances when they presented themselves.

None of this was new – Connacht are really good at weaponising this low possession game, especially away from home. The kicking of Jack Carty is pivotal to this game plan. They kick deep, they pressure high, they go after the breakdown, they roll the dice with some of their line speed and they play hard on transition when they get a kickback.

It’s smart rugby, especially on a wet, greasy, chilly night in Limerick where the surface has a memory of the rain that fell for most of the evening. If it felt, at times, like a re-run of the Rainbow Cup fixture from a few months ago that would be a pretty good read of the situation because they were mostly identical. In that game, Munster had 61% possession and 66% territory. Connacht had 169 tackles in the Rainbow Cup fixture and 176 this time around. Last time we lost by four, this time we won by two.

Their long kicking wasn’t without risk. The longer you kick, the bigger the danger of a transition – that is a risk Connacht take and try to mitigate against consistently. We were able to make them pay with an attack across the field and a kick in behind. A little different from the strategy I wrote about in the Red Eye but similar in principle.

I spoke before the game about the lineout being super important against Connacht, especially with their kick pressure game. If they kick long and deep, that will lead to the likelihood being high of them getting a number of lineouts. They kick deep, we take possession, we reset, we kick the ball off the field. That then opens up our concerns about our defence off the lineout. I wrote pre-game about how Chris Cloete would play a big role in making Connacht wary about attacking Carbery/Scannell through Hansen, Aki and Arnold.

The first lineout of the game was a bad defensive malfunction that cost three points to get out of without conceding a try but we recovered well from then on out.

Our lineout contesting wasn’t at the same level that it was in the first two rounds. Our counter-launch timing was a little off throughout but I thought we got back into our defensive system quite well, bar that first slip. We did get hands on one or two of Connacht’s throws but not enough to turn things for us until later in the game.

Our own lineout ranged from poor to quite good, especially later in the game.

The natural tendency in these situations is to blame the hooker but Scannell’s throwing is pretty good on all of these. The calling structure and the implementation of it look to be the issue here with guys running into each other and looking a small bit lost.

Beirne – the lineout caller – was making his first appearance of the season so a little bit of rust is to be expected. We got the lineout together quite well later in the game but there’s no denying that it sapped momentum at key points, especially in the first half.

Our work at the breakdown was a little disjointed too and seemed to struggle with the combination of Connacht’s line speed, aggression in contact and vigour at the breakdown. We were using our Ruck Point Attack during the game to follow on from last week. Success was mixed on that front this week but not without some good moments.

But it didn’t fire as it could, even if we did win the game through our tight play in and around the ruck point. We left a few scores out there, for certain, but Connacht’s energy and focus in defence made life difficult on a greasy enough day for handling the ball.

A win is a win. That phrase can paper over some cracks or be an attempt to but that isn’t my intention. We didn’t play as well as we did last week with a wildly different team. Connacht are better than Scarlets, yes, and the weather conditions were different but things like our lineout and our offensive structure off #10 didn’t really look as sharp as they have in the three games prior.

A win with plenty to work on, but an Interpro win nonetheless.

There’s a lot of focus on Joey Carbery at the moment. Dreadful charge down for Connacht’s second try aside, he didn’t do a whole lot wrong in this game. His kicking off the tee was game-winning stuff! He muscled up on defence after a bad slip off the first lineout. The problem is, he didn’t really dictate much with the ball in hand, in my opinion anyway. His passing range was relatively limited, his pass quality was a little off too and I thought he was hurt minus a ball-dominant heavy hitter outside him. That was always going to happen with Scannell and Earls in midfield – both good players but not of a similar profile to De Allende or Farrell. When we see Carbery play alongside one or both of those players, we’ll see a different player because I think Carbery needs threats inside and outside to fully exploit the triple threat of his short kicking game, mid-range passing and agile breaking ability.

Chris Cloete backed up an outstanding performance against the Scarlets with another dominant breakdown performance here. His slip for Boyle’s try was a blot on the copybook but his work rate, aggression and technical prowess at the breakdown were key parts of this win. ★★★★

This is a big season for Diarmuid Barron and boy, he’s playing like it. His lineout throwing was sharp. He hit some really tough targets under pressure and linked up with the maul well afterwards.

That kind of tight, accurate throwing will take you a long way. He’s backing that up with a varied, teak-tough carrying game that seems to be growing with every passing game. Good stuff. ★★★★

Fineen Wycherley has made himself an incredibly important player to Munster all of a sudden. He replaced Kleyn around the 60 mark and… kept the show on the road. More than that. Kleyn is incredibly important to this Munster side but Wycherley brought a well-balanced power game off the bench. Energy, work rate, and the scope to make big plays that were the difference between winning and losing. Another big moment in the collection for a guy who looks to be growing every game. ★★★★

Gavin Coombes has squarely taken over the mantle from CJ Stander as the big, heavy-hitting primary ball-carrying outlet in this Munster side. He took the ball to the line 17 times today and kept going for the full 80 minutes. He’s a different type of hammer from Stander though.

He’s tough, he’s hard but he’s a natural passer of the ball capable of finding the kind of passing lanes that others just can’t. He also kept going through a tonne of double and triple tackles while mixing it up with strong breakdown work on both sides of the ball. ★★★★