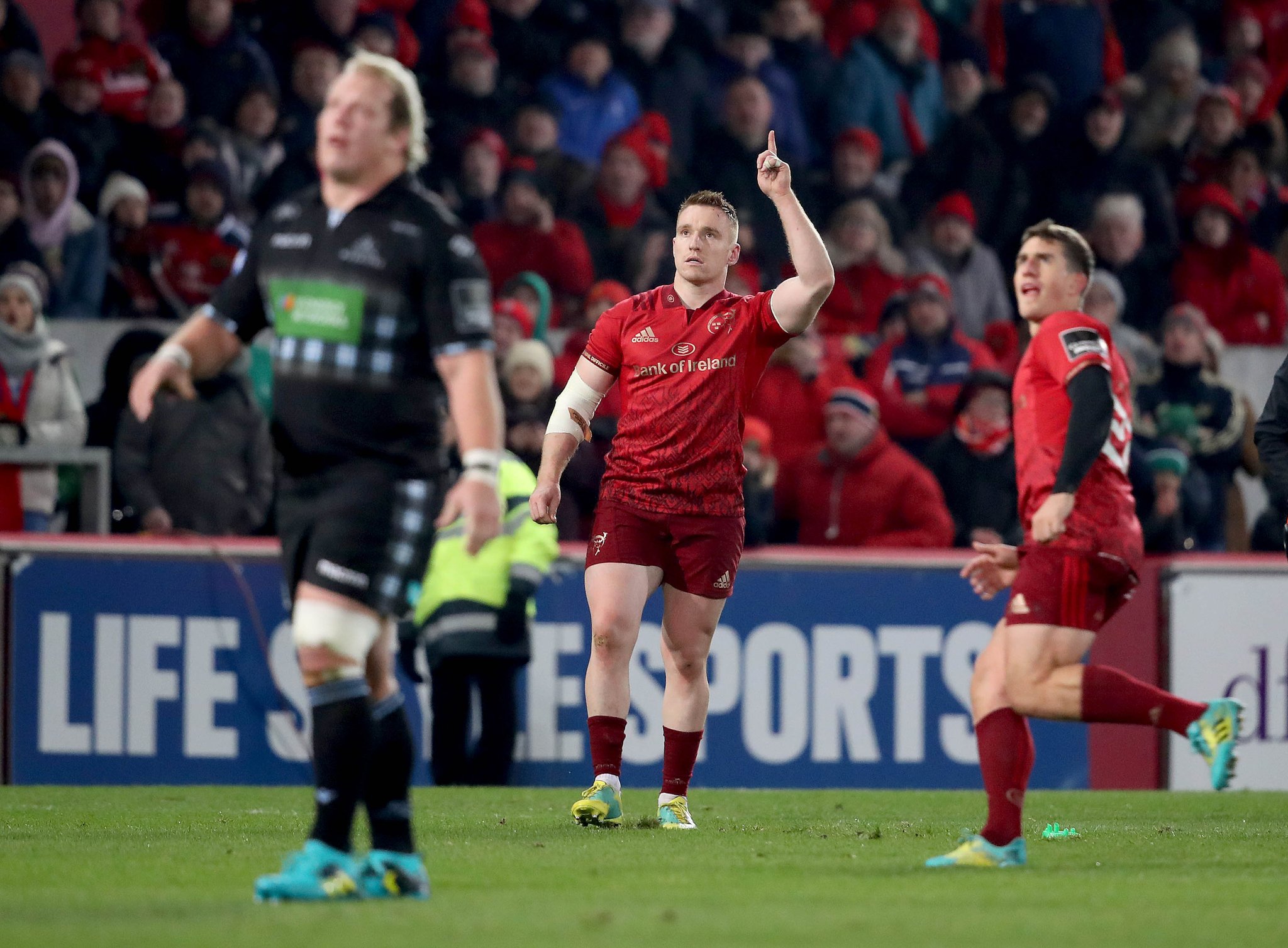 There’s very little in this life as pure as when two groups of people can’t fucking stick each other on a rugby pitch.

I’m all for smiling happy people kumbaya-my-lord-ing until their faces crack from smiling in the real world but out on the rugby pitch, my black, shrivelled walnut of a heart demands hatred, spite and niggle, sweet, sweet niggle. In that regard, it doesn’t really matter that Glasgow thoroughly deserved to win this game with a bonus point. Fuck that. It’s a technicality I haven’t any interest in. That Munster nabbed this game at the death thanks to Rory Scannell booting one from Ballynanty is about as sweet as it gets in this game.

Glasgow, with victory in their hands since the 35th minute, had it all yoinked away with the last kick of the game from forty-five metres out in the aftermath of a contentious penalty. We can talk about that in a few minutes but allow me a brief few minutes to wallow in the yoinkage.

Now that that’s out of the wa- no, hold on. Just a bit more.

Anyway, look, this was the handiest of handy results for Munster. Glasgow deserved to win here and then some. They would have won too, but for their own profligacy from the tee. They’ll have their complaints with the manner of the endgame (have a look on Twitter later if you’d like to see some of those complaints and also feel like gouging your eyes out a few minutes later) but they entered into the high stakes game of trying to close out a win with multiple narrow phases of pre-sealed possession.

As the clock ticks on, the referee gets put into a pressurised position. Most refs – and Jones here is one of them – will allow you a certain amount of sealing off in the context of the game but, at the same time, will reward any defending player that gets a clean look at the ball after 12 or 13 phases of that kind of play.

So when Glasgow go flying off their feet here;

And here. It’s a thing that the ref will let go unless it’s particularly egregious and/or dangerous. We’ve seen it again and again. If you want to see out a game like that, you’ve got to be spotless with your latching and your timing.

From a defensive point of view, it’s almost impossible to stop.

Unless you can manage to generate an isolated carrier. Sometimes you can do this by engaging and then disengaging with a ball carrier to force him to surge through on your position so a jackal can get at the ball without his latchers. But there are other ways.

If your jackal can get at the ball, the referee will tend to blow up quicker than he would normally because of the context of the exchanges to that point.

In this instance, Stander went at the ball carrier, made contact with him and then saw his momentum barge him through on the latched player – exactly as planned.

This separated Gibbins from the ball carrier, O’Mahony clamped onto the ball, Glasgow went flying off their feet and Munster had a penalty. “You’re straight down,” referee Dan Jones said of the Glasgow forward, “and he [Peter O’Mahony] is on his feet.”

Glasgow were one phase away from a bonus point win in Thomond Park that, if not killing outright, would have critically wounded Munster’s Conference A chances in late October. Even with the penalty, Munster were still a world away from the try line with a nasty crosswind. Down the line? Or go for the posts?

The clock went red. Forty-five metres out on the right-hand side of the field. It wasn’t a suitable shot for Ian Keatley, being a right-footed kicker and a little out of his range. This had to be a left-footed kicker. It had to be Rory Scannell.

He stood over it, all of forty-five metres out, and, in the silence of Thomond Park, drained a monster kick that sent the stadium into raptures, triggered a mini pitch invasion of Munster players and staff, and sent Glasgow home with two points rather than five they probably deserved. To give you an idea of the distance, Scannell kicked the ball at 80:35 on the game clock and it sailed over the black dot at 80:39. Four seconds in the air. That was the difference between a tough week in South Africa and an excruciating one.

Make no mistake, Munster weren’t good here. The manner of the comeback was good and deserves praise, yes, but the majority of the wounds were self-inflicted.

There were four Glasgow tries. Two of them were directly from kick transitions.

Mathewson’s kick through was a decent idea but when Glasgow attacked the side that our heavy forwards were aligning onto, it gave their pacey backs a slow lane to attack and they surged through for a coast to coast score in the corner.

Then a scrappy contestable kick – itself in the aftermath of a disrupted scrum exit – opened up space for Glasgow to catch Munster narrow in a kick realignment.

The third try for Glasgow came in the aftermath of a double-transition.

We counter-attacked off some scrappy Glasgow possession in the middle of the field.

When we reset after this break, I think we took a sub-optimal option off #10 when Hanrahan hit inside to Ryan. I know why he did it – Glasgow are weak around the pillars in the aftermath of a big linebreak – but in this circumstance, it was asking a lot of the ruck support to clean up that carry.

Glasgow turned the ball over and went the length of the field once again.

The field position they’d earn here would eventually lead to a yellow card for Cloete in the corner, a dominant 8 on 7 scrum would lead to their third and Munster were in trouble.

Personally, I think Glasgow were a little lucky that Kleyn was blown up for this maul penalty.

Kleyn came straight through the middle – just watch him at the start – that the ref assumed he must have come in from the side. Glasgow scored a few minutes later off a nicely executed kick through.

At 24-10 with 20 minutes left, Glasgow should have seen this game out. Munster were all but dead and buried but, in theme with the time of year, Munster are that evil movie monster that isn’t finished with you until you’ve made it past the end credits and back in the foyer.

Alex Wootton and Alby Mathewson’s come-back scores were the lights going out and Rory Scannell’s kick was the girl from the Ring coming through the TV moment that killed Glasgow off at the death.

And he was right. Both sides might have been shorn of a couple of their top players – Brown, Jones, Hastings, Gray, Hogg for Glasgow, Murray, Farrell, Beirne, Conway, Carbery for Munster – but this was a massively intense, tightly contested game between two sides who just don’t like each other all that much. That was plain from the very first minutes of the game where there was barely a ruck or collision that didn’t have afters in one form or another. Games like that make for tough encounters and this one was all that and more – we’d expect no less from Glasgow at this stage. They’re good, the fuckers, all the way down. As Van Graan said, Munster needed 80 minutes to put them away but put them away we did, in the end, all the same.

The first quarter was good from a Munster POV. The second quarter saw a lot of hustle but too little structure and our kicking game from 10 on out gave away the impetus on our phase play a little too often. The third quarter was scrappy. The fourth quarter was exactly what it needed to be.

Elements of this performance will need to be isolated and examined – and I’ll do that this week on TRK Premium – but at the end of a block of games that saw Munster travel to Glasgow, Cardiff, Leinster,  and Exeter mixed with home games against Ospreys, Ulster, Gloucester and Glasgow I think we’ll take a handy four-pointer here when we can get it.

When Peter O’Mahony is counter-jumping like this, it saves everyone a load of hassle if you just hand him the ball the minute the ball goes into touch.

O’Mahony was a key part in Munster’s eventual win here, showing off good defence, great handling when needed and came up with a crucial penalty turnover to put Munster in a position to win. Great impact in the big and little moments.

Arno Botha had a great impact with his ball carrying off the bench that set Munster on the right foot to chase down the Glasgow lead.

CJ Stander had a few good carries but his main bread and butter were in defence. He made 21 tackles on a day when they were needed.

And what about Rory Scannell?

What a moment. He had a pretty decent game outside this moment but when it comes to a big moment like this, any man that drains that kick is a five-star man for me. He’s got massive stones, massive bottle and the technical chops to pull off a monster kick like this with a wet surface and a manky crosswind.

Big players make the big plays on the big days, and that was Rory Scannell in this one. Superb.

There’s much to cover in this game and I’ll be doing that in TRK Premium all week long with GIF and Video Articles. Be sure to check out the Post Match Wallycast on Monday to hear from Van Graan post-match as we build to the Cheetahs in Bloemfontein next week.