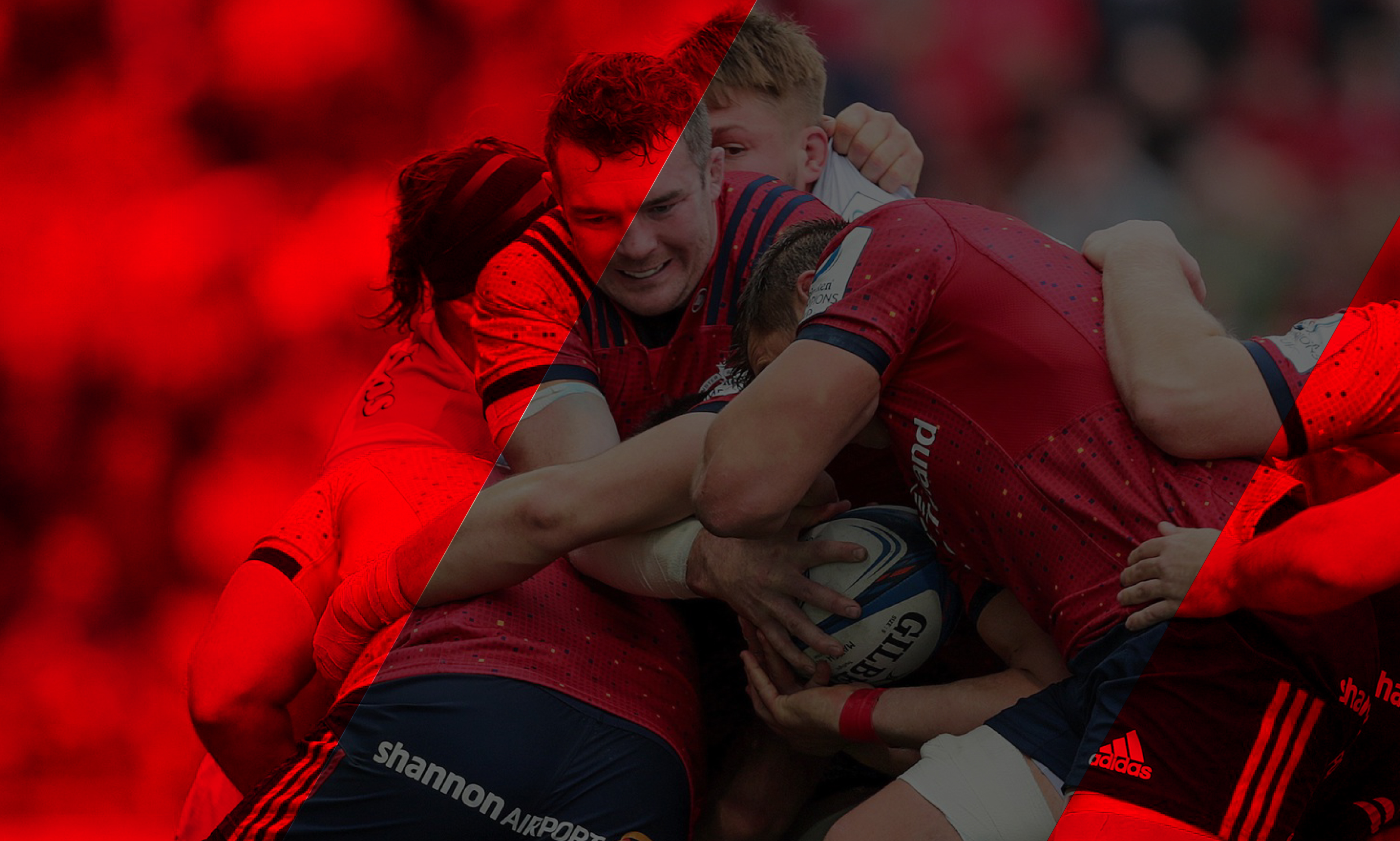 I hate losing to Glasgow.

If Munster were playing Glasgow in fucking kabaddi I’d want Munster to beat them to within a metaphorical inch of their metaphorical lives, see them driven before us and hear the lamentation of everyone they hold dear. That’s just the nature of the rivalry. The players know it, the coaches know it, the fans know it – Munster vs Glasgow has become that tasty fixture that everyone behind the scenes hoped it would. Playing Leinster, in some ways, has been diluted by the very nature of the IRFU set up and the recent Irish successes. You always want to beat them, of course, but the spite will only ever go so far with guys who are probably on nickname basis in your Whatsapp contacts.

Glasgow, though? Fuck those guys. I mean that with all due #respect and all that because look, you never care about beating a team that doesn’t matter. In that regard, Glasgow matter quite a great deal, especially because of the very recent defeat in Scotstoun, and specifically because of the context of Conference A. Quite simply, this game is almost as important as the game that preceded it.

Usually, the end of Heineken Cup hostilities in October leads to a slight drop off when it comes to must win, can’t lose games. That isn’t to say that Munster, or any other side for that matter, go out thinking that it’s OK to lose games at any point, but some matches are just more important than others. A Heineken Cup pool has five games with only one guaranteed qualifier from four teams and, perhaps, one best runner-up. The PRO14 has 21 games with 3 playoff qualifiers from a conference of seven teams. The scarcity of opportunity in the Heineken Cup makes every game do or die. That doesn’t apply in the PRO14, and I think that’s the main issue that people have with the tournament when it’s compared to the Heineken Cup. A mistake in the Heineken Cup is difficult to rectify, which isn’t true at all in the PRO14 until much later in the tournament. So when you feel a drop in the week to week intensity, what you’re actually feeling is a change in that scarcity of opportunity.

That’s what happens most Octobers when the changeover happens – but not this October. Instead, the intensity will stay broadly in the same place as it was for the Heineken Cup. Maybe not exactly at the same fever pitch but close enough to count. Why? Because, through a quirk in the fixture list, Munster will welcome Conference A leaders Glasgow to Thomond Park barely a month after playing and losing the away leg of this fixture. Normally, there’s a fair stretch of time between fixtures like this, which allows an element of “breathability” between results but this year means that the opportunity to reverse the defeat and directly damage our conference rivals comes incredibly close to the previous fixture.

This year Munster will be all but done with Glasgow this month bar a playoff encounter of some description and that, as a result, puts direct pressure on this fixture.

The conference structure of the PRO14 puts a lot of pressure directly onto in-conference games against your positional rivals. Essentially, they are one of the few occasions to directly eat into a lead they may have over you, as is the case for Munster here. Glasgow currently have a 10 point lead over Munster at this stage of the season and any kind of loss this weekend would be close to a serious blow to the southern province’s league campaign. A defeat at home would stretch Glasgow out to at least 13 points while putting Munster closer to the bottom of the conference than the top and removing another inch of wiggle room in the quest for PRO14 knockout rugby next April. Quite simply, it has to be a Munster win.

Knowing all that, there’s very little that will surprise you about Munster’s teamsheet for this one. 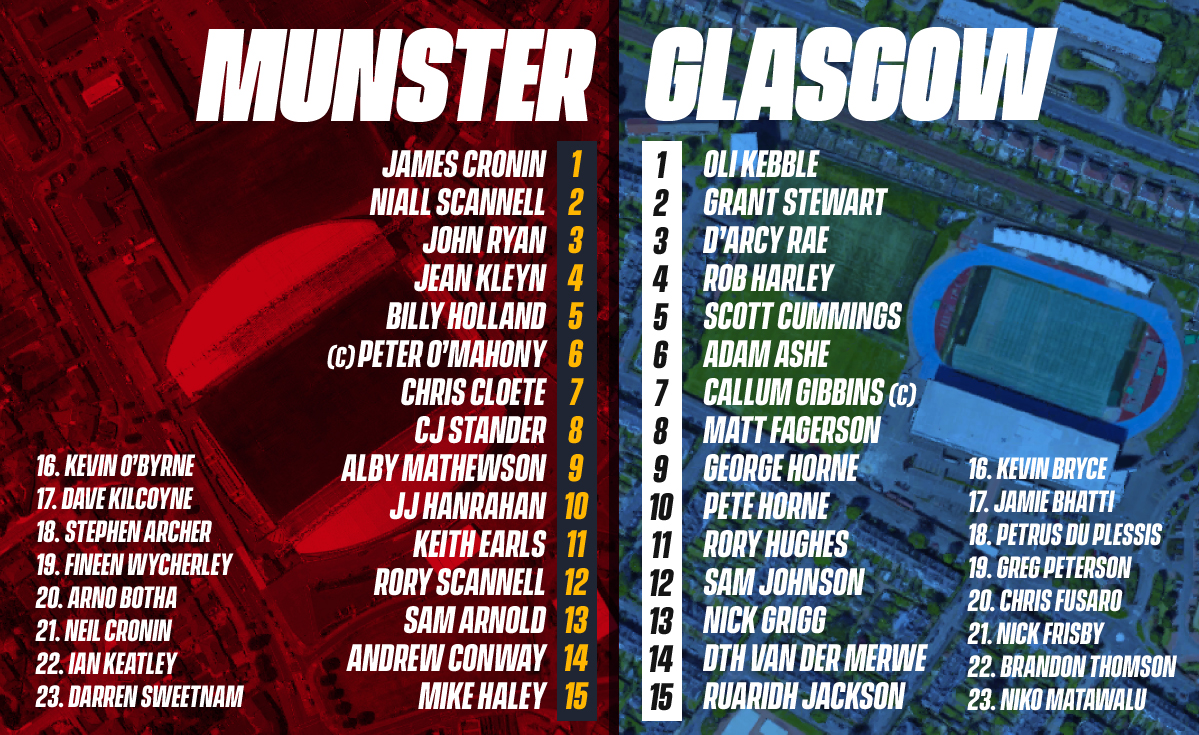 I’ll get into the team specifics in the Blood & Thunder Podcast.

In the Red Eye I did on Glasgow just over a month ago I ended the piece with the following; “This will be an incredibly tough test for Munster, but by forcing Glasgow to play the game they don’t want to play will be a start to getting the result they want here.”

To say we didn’t manage to do that in that game would be an understatement.

The way the game went in Scotstoun, Munster can take quite a bit of pride in preventing Glasgow from earning a bonus point victory.

Glasgow had 71% possession in the first half, 85% territory and scored all three tries off the back of wielding serious pressure inside the 22 for much of the first 35 minutes. When Munster tried to respond, we just couldn’t get a rhythm going. When you’re conceding multiple scrum penalties that pin you deep in your own 22 and can’t challenge their lineout, you’re in for a long night – and so it went, for the first half at least. Munster were slightly improved in the second half but nowhere near good enough to start running down a 22-0 halftime lead.

So how does that translate to this game?

Much of what I discussed before and after that game still applies, especially getting at Glasgow’s “mini-blitz” from A,B&C on certain multiphase sets, but our game at that point in the second game of the season wasn’t at the level it would need to be to take on a fairly stacked Glasgow side. In truth, Munster just couldn’t any of the basics of our game into place in Scotstoun while the game was being decided in the first half and couldn’t recover.

Here’s a decent example of the problem when it came to our phase play;

John Ryan’s carry was really good – exactly what we’d look for in this position – and Scannell’s animation behind that initial three-man screen is the kind of picture we’d want to display. 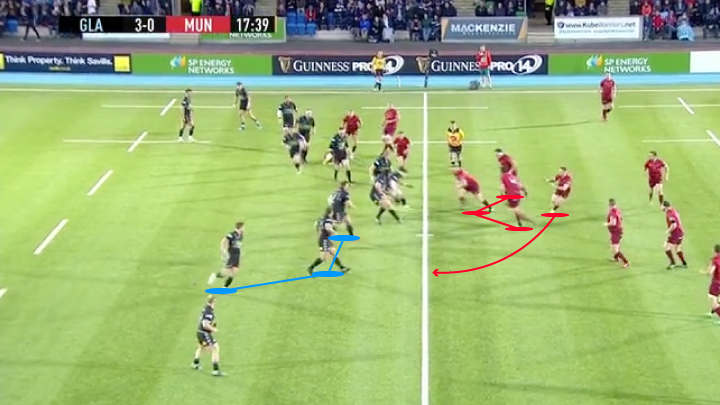 Scannell is showing the Glasgow midfield defence that he’s a live option on these passages and that’s the kind of work that pays off down the road if you can paint a good enough picture. It helps to build one on one forward isolations on the carry – to cut down two on one hits that lose the gain line – and it increases the amount of decision making the floating midfield defenders have to make.

On the phase after, things start to go wrong in my opinion. Hanrahan takes a conservative option to Sherry on the edge of a two-man pod as opposed to hitting Scannell who, once again, is well positioned behind a forward screen. 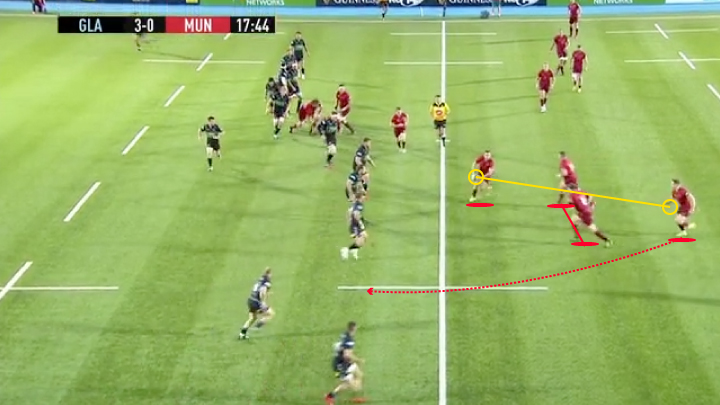 Sure, the decision to go to Sherry here was made worse by Sherry’s subsequent spill of possession that unbalanced the tempo of our attack but it was an example of how one average decision made the next decision more difficult.

That spill from Sherry lead Kilcoyne into an unresourced carry which slowed down the ball and lead to a kickaway to Hogg that could have easily pinned us back to our own 5m line. Look at the way our screen work degraded because of the loss of numbers. 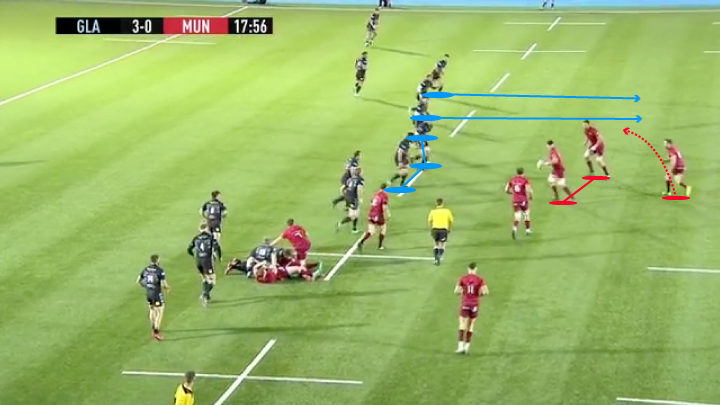 This was an easy read for Glasgow because of the speed of the previous ruck. Holland’s pass to JJ was a good one but with Kleyn as the other likely option, Glasgow’s outside defence could step into Hanrahan’s space and cut off the move. A kickaway was one of the only decent options left.

Munster’s decision making on pass options will be vital in this game. Hanrahan, in particular, will have to bring the same smooth decision making that we’ve seen from Carbery over the last few weeks. Can he do it? The result hinges on it.

The pack we’ve selected for this one indicates (a) how important the fixture is and (b) how we intend to play Glasgow. Our phase decision making is hugely important with regard to screens, as highlighted above, but playing off #9 will be the biggest part of this game. Glasgow’s biggest weakness is – and pretty much always has been – when they get outmuscled on consecutive phases close in which forces poor decisions further out.

We saw elements of this in the first game against them this season in the aftermath of dominant strikes on the gain line.

This was off a centre-field ruck position, so you’d presume you’d be able to attack a broken blitz here but the same picture showed up of dominant carry positions everywhere on the pitch once Glasgow weren’t pinned back into their 22.

When you see Glasgow’s forwards compressing around the ruck it’s usually a sign that they’re insecure about the next phase of possession and they’re numbering up on your heavy forward carrying lines. This is really effective deep into their 22 – as Munster found in that last game – but when it’s further out, it can create hinges between forwards and backs that Munster have to do a better job of exploiting this time around.

If we can sell Glasgow on the threat of our ball carrying – something we didn’t manage a month or so ago – then we can force them to compress to avoid taking contact damage up the middle of the pitch. This is what Saracens did to great effect in their recent Heineken Cup game.

Look at the three-man cluster on red #8.

His pull-back takes four defenders out of the game and creates live isolations for the backs to attack as the ball spreads across the pitch. Saracens would score a few phases later.

You can see the same compression on this lineout sequence.

The big hit up in the #10 channel off the lineout compressed Glasgow – as you’d expect – but it made the second phase easier for Vunipola on a quick ball ruck.

The play was blown up before it could develop but that second phase strike by Vunipola is exactly what Munster will be looking to do with Stander and Cloete, perhaps with Arnold providing the initial hit up.

If you can make Glasgow fear your ball carrying on successive phases, you can get at their tendency to compress with pullback options and tip-ons. This then unlocks the potential for more expansive close in contact play.

Just for good measure, here’s Sarries going after that A,B&C after a big gain line hit.

It isn’t enough to go after Glasgow close to the ruck – we will need to spread the forward resources in such a way that Glasgow will have to match it spacing wise. If we can do that – Holland’s passing the middle of the pitch will be crucial here, as will the accuracy of Scannells and Hanrahan’s distribution – we can make Glasgow, finally, play the game they don’t want to play.