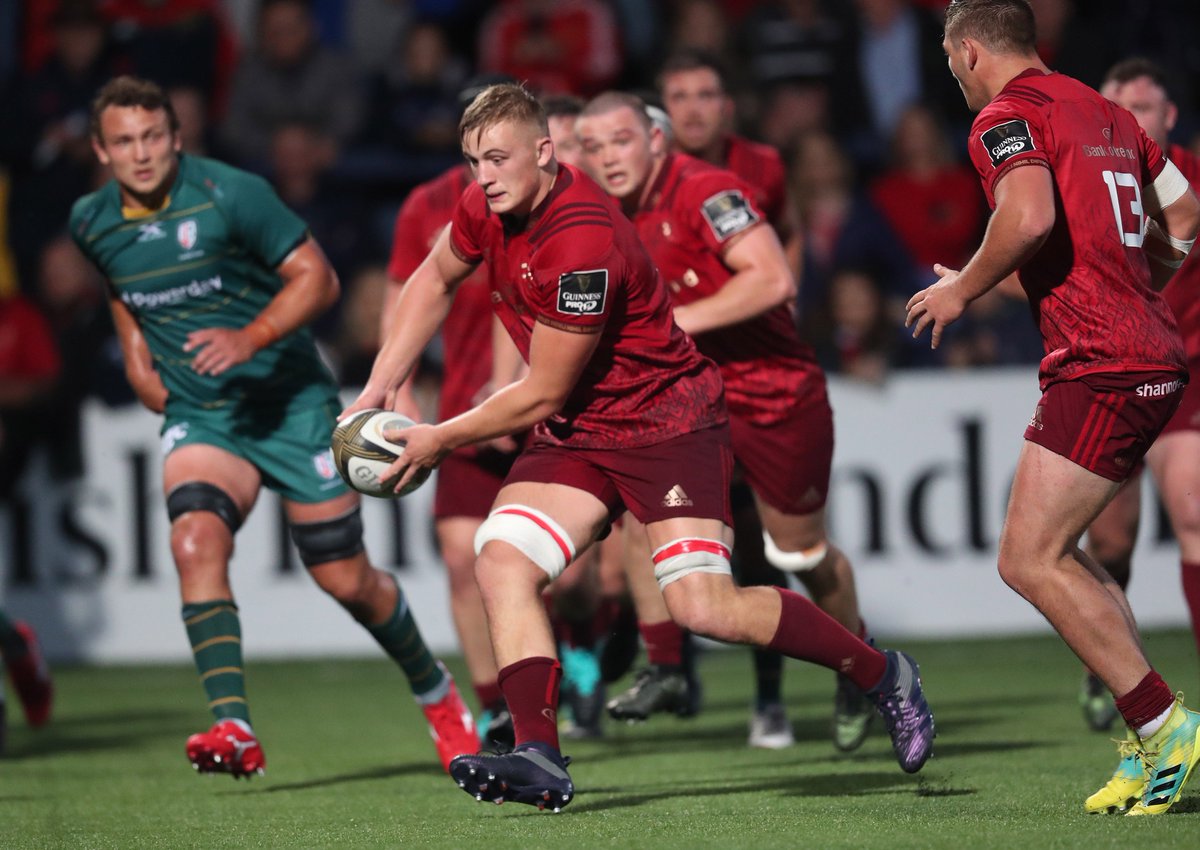 I’ve covered Gavin Coombes before on the Young Bucks back in 2017 – have a look at it here – but I thought it might be good to check in on him again two years later as he develops into a senior deal in the coming season.

What do we know about Gavin Coombes after this season?

We know he had 241 minutes of senior game time this season and we know that he earned an average WR score of 3.375 in those two starts and six replacement appearances. He played 382 minutes for Munster A this season, scoring one try.

Looking at his positional breakdown based on selection for both Munster and Munster A, we can see that Coombes has been selected in the back row in all but one of his appearances this season. He’s started at #8 and #6 on both of his senior starts and played as a flanker replacement seven times, coming off the bench at #19 against Ulster. All of his Munster A appearances came in the back row, with four at #8 and one at openside.

I wrote two years ago that I saw Coombes taking up a loosehead lock role but that doesn’t seem to be the plan at this stage if we look at where he’s been consistently selected over the past season. Coombes looks to be heading towards filling out that 6/8 slot in the back row and, at 6’4″ and around 17.5 stone, you can see why Munster might see a future for him outside of the engine room.

Athletic, mobile, powerful back-row forwards with that kind of height and weight don’t really come around all that often so if Munster can get a guy with Coombes’ profile up to speed at 21/22 years of age, they could have a test standard athlete on their hands.

The most exciting thing about Coombes as far as I’m concerned is his ability to do all the things you’d expect from a lock at the lineout while having all the dynamic heavy ball-carrying you’d expect from your primary back row ball carrier.

Not every back row gives you both options; lineout work on both sides of the ball and that big-hitting heavy carrier profile with ball in hand.

When it comes to all aspect of lineout play, Coombes is really, really good – especially as a support player. He can jump and handle the ball in the air as you might expect for a guy who’s played as much second row as Coombes has;

His footwork, movement precision and launch are really good and he’s intelligent about it too – nothing about his work prior to the jump gives away that he’s the target. Leinster gambled on the position here and almost got a result but Coombes launch is very clean.

The same qualities are visible here on a pressure defensive lineout. His handling at the top of the jump is really smooth here and it’s a consistent thing with him from what I’ve seen this season.

The other nuts and bolts of his set-piece game are really good too.

He is a very strong lifter.

Coombes gets full extension on Darren O’Shea going backwards here – impressive stuff on a big lock like O’Shea. The clean launch plays a big part in Munster retaining this lineout under heavy pressure.

Lifting is one thing – and he’s a guy who knows his lifting routes and how to disguise them – but it’s what comes after is the thing. Coombes is an excellent offensive mauler from the pillar position post lift.

Defensively, Coombes brings a lot of power on counter-shoves and he has a notable stopping impact when he hits a maul on a second shove.

Watch this maul from when Coombes (Red #8) enters.

This is a three-man defensive shove with O’Shea going over the top on a scragging mission. No maul defence is a solo effort, but he has shown consistent stopping power and intelligent entry angles.

Having a back row who can fill this heavy set piece row on both sides of the ball gives Munster some interesting combination options in the pack next season, especially if you pick him at #8.

The other part of Coombes’ game is his ball carrying power. If he continues in the style he’s currently working in, he’ll be right where he needs to be next season.

It isn’t about strength because he’s plenty strong, it’s about matching that with speed and acceleration. If you get all three, you’ve got a power carrier.

I think Coombes is certainly getting there. Players of his size tend to take a few seasons to properly fill into their frames as power carriers in the pro game. Other things like his footwork before contact, agility and lateral acceleration look to be pretty good too.

His offloading is pretty good too on the above evidence but look at his footwork and handling after he takes possession – two stutter steps to stagger his man, a burst of acceleration around the corner -and a backhand offload from a one-armed carry.

From a standing start – and with an average enough pass delivery in the below instance – he’s shown consistent ability to win collisions.

This is at A grade, yes, but this ability to win collisions has been with him since I saw him vapourising hardened English Championship professionals in the B&I Cup final a season or so ago. If he continues his physical development as he has been, there’s no level he won’t go to as long as he gets the opportunity.

Coombes is an excellent prospect but I’d like to see a little more development of his skill set next season. His passing is actually quite good off both sides – that isn’t to say it couldn’t be better – but if there was one area I’d like to see improved it would be his handling at the back of the scrum and, following on from that, his launches off the base of the scrum assuming he continues at #8. If he’s going to settle more at #6, which could well be an option with Jack O’Sullivan coming around the corner for next season, then I’d like to see his second/third phase ball-carrying get to that next level – breaking for clean linebreaks and dominating the centrefield collisions. He’s got the frame and power for it – all he needs is the opportunity. A good match for Coombes is Duane Vermeulen. Both men are of similar height and build and, with a bit of luck, Coombes can reach similar heights. I truly believe he can.

Outside of these little bits, I think Coombes is right where he needs to be at 21 years of age. He’s got some good pro experience under his belt and, with some luck with injury, should go well beyond his eight appearances next season. Ball carrying forwards start coming to the fore at the age of 23/24 so he has time yet but he needs consistent game time and responsibility to grow his skillset from here. If he gets it, there’s a very good player waiting for Munster and Ireland in a season or two.