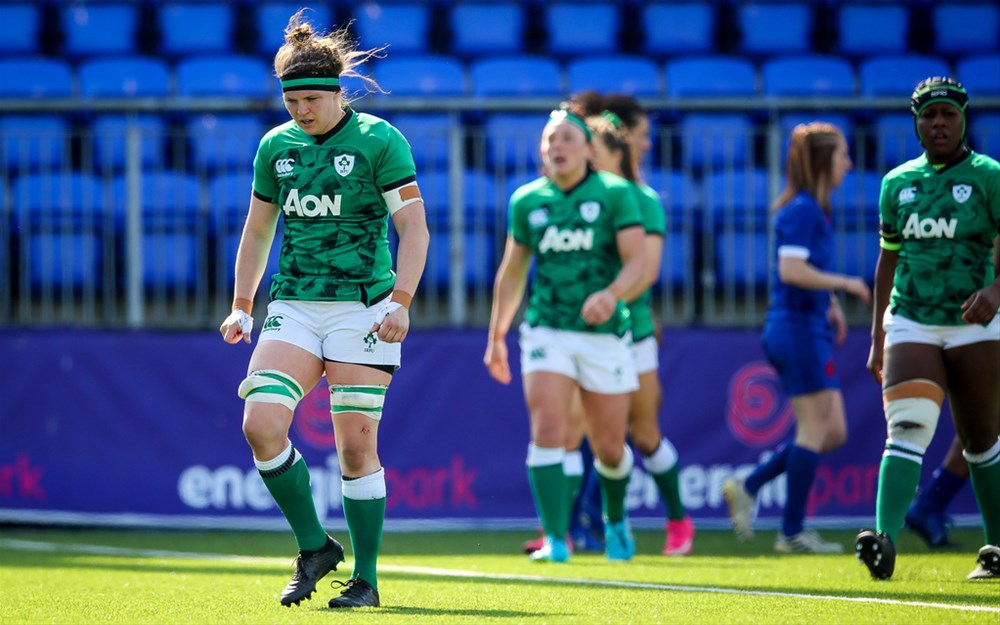 By Tom Savage8 min read
There is an entire debate that could be had instead of this match review that focuses on France’s team of semi-professionals versus Ireland’s amateurs and how lopsided results like this are an almost inevitable consequence of that inequity. There is no doubt in my mind that the Irish women’s team should be on a pathway to professional status in the near future but to focus on that discussion after a loss like this I think does the efforts of this Irish side a disservice, as if there were no possible way that they could have won this game or even come close.

I don’t buy that. I think this Irish team are considerably better than the 15-56 scoreline suggests. When they watch this game back a few times, they’ll see several instances where an option taken – or not taken – lead to a situation where they brought pressure on themselves. 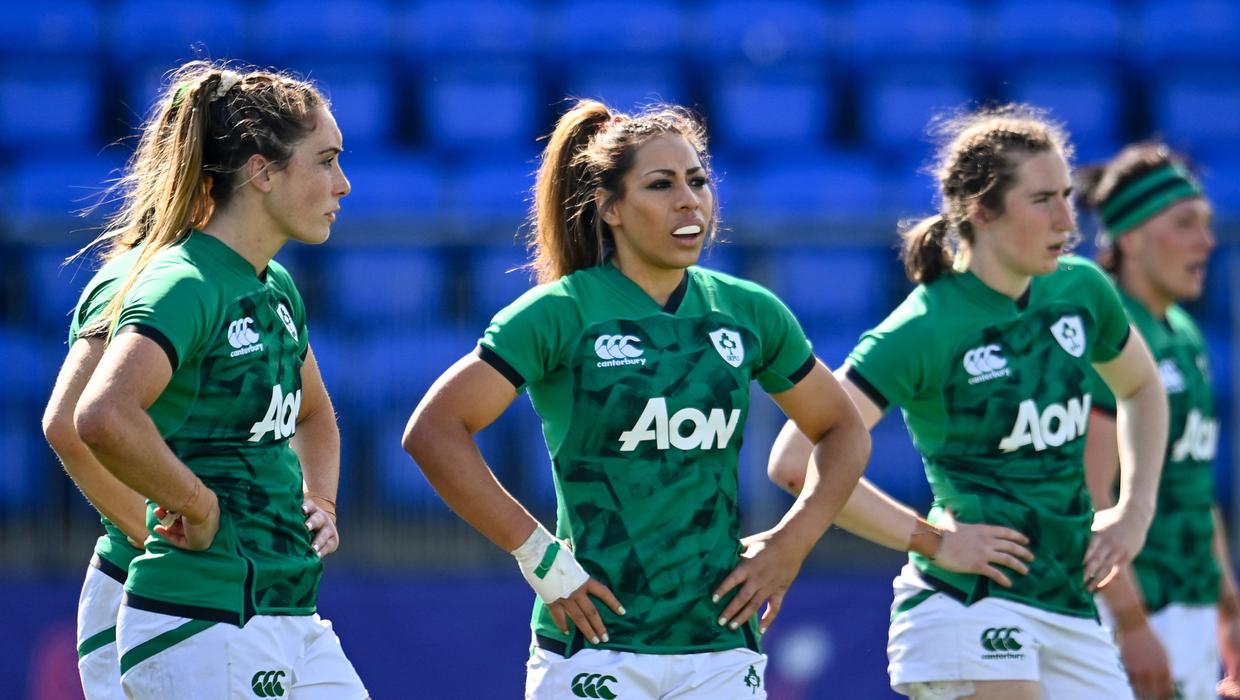 This game played out like an illustration of the challenges you face when you are playing against a team to whom you give up a large deficit in size and power. When the opposition is bigger and more powerful, you have less margin for error in how you play. A bigger team can afford to brick the odd lineout, lose a breakdown or even concede a scrum penalty or two because they know they have the stopping power to live with the aftermath whatever happens. The smaller team does not have that luxury. Every possession has to be judged under the following criteria first and foremost – do we need to be playing the ball on this phase?

This is because, for the smaller team, where you play the game becomes incrementally more important and not just vertically – which indicates territory – I’m talking about horizontally.

In practice, these are the options you take ruck to ruck, phase for phase. Are you picking and going around the fringe? Playing tight off #9? Going off screens? Playing straight off #10 and going wide? These decisions are hugely important when you’re playing a physically stronger team than you. In my opinion, anything other than a set up carry off #9 has to be really on to warrant not kicking the ball when you give up a big power differential in the scrum, in the maul and on both sides of the collision.

I felt Ireland were guilty of overplaying during this game, often to our detriment.

Here’s a good example. Context; Ireland have a knock-on advantage after a crooked French lineout. We seem to have a real licence to “play” when we have this kind of turnover ball because I’m not sure why else we didn’t kick this. At one point, all 15 French players are in shot. I get there’s a strong breeze blowing into Irish faces here but I’d want this ball kicked downfield way earlier – go low, go long – because coming back for a scrum against this French pack is not the advantage we want. Let’s play down in their half.

At the end of this clip, you see the impact of Safi N’Diaye, the dominant forward on the field, on the Irish ruck. It takes two Irish players going off their feet and ending the ruck to get her off the ball, which opens up the play on the Irish scrumhalf. Bad omens.

Late in the first quarter, Ireland were still well in touch on the scoreboard and had a decent lineout position inside the French 10m line. Once we got to the wide 15m tram, the next tight phases off #9 were crucially important if we wanted to build momentum. We lost the collision. We reset by going wide again before losing the next collision too.

At that point, we weren’t really in control of these phases despite having positive territory. France are dictating these phases without the ball. When we tried to reset wide again, our power winger Parsons has way too many bodies in her way to be the weapon we need her to be on this play.

France have 12 or 13 players in their primary defensive line during this sequence and we keep losing collisions that might create space in the outside channels. Late in the sequence, things are looking a little ropey. Pod shapes are ahead of the receiver – in this case, it’s our flanker Claire Molloy – but little things like this say to me “why haven’t we kicked this yet”? 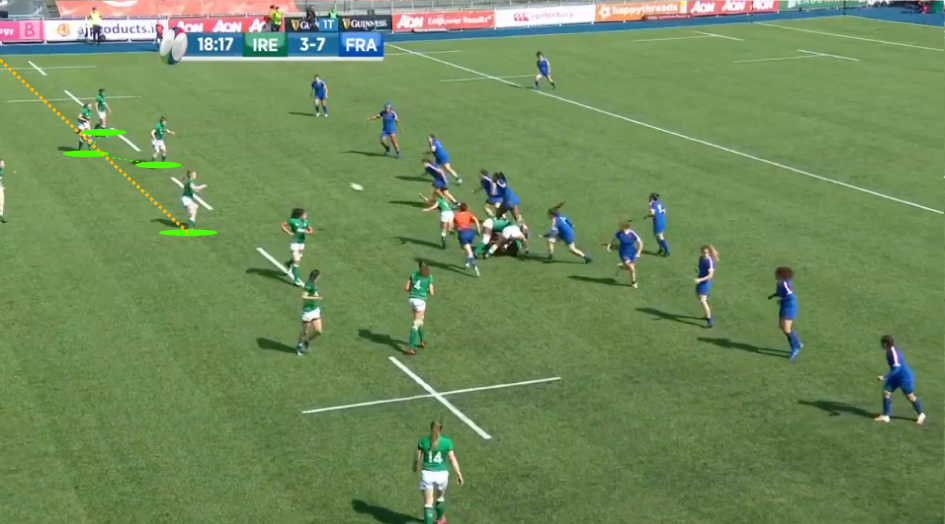 Considine tried to keep the ball alive in the wider channels in heavy traffic but France turned it over, booted it down the field at the first opportunity and scored on a transition.

When you look at France’s Ball Played By Hand %, you see a lot of variety in their phase choices. Their winger – Caroline Boujard – only played the ball by hand on 69% of her possessions, which means she kicked 31% of the time. Their #12 Jade Ulutule had a BPH% of 69, their #10 had a BPH% of 84%, their scrumhalf Laure Sansus had a BPH% of 86%.

For Ireland, only Considine (72%) and Tyrell (86%) had a BPH% less than 90%. France had a physical advantage over us in contact, that much was clear, but they still kicked 10% of their possession. We only kicked 6% of ours on a day when we were getting pieced up in the middle of the field on every other carry.

When we kicked the ball – usually from restarts – we actually managed to pressure France relatively well and pull a few transition opportunities out of them. Look at how well Considine kicks on the second and third clips in this montage. That’s the kind of pressure we needed to be putting on France all the time.

Our replacement #10, Stacey Flood, had a BPH% of 72% and we were better for it. Her kick in the last clip was the exact right play to make. It allowed us to chase, pressure the receiver and back our scramble defence on the French transition. That action produced a turnover that we could actually work with, which ended in a penalty that would ultimately lead to a try.

These examples in the last quarter ended up being kicked dead but they were the exact right concept from Eimear Considine – put air on the ball, get a chase in, force France to reset and kick.

We didn’t do enough of it. All through the game, I think we were a little guilty of “Get the ball to Parsons” as a primary strategy on transition when the threat of Parsons was creating space in the backfield we could have kicked into.

Both of these examples show Ireland conceding a penalty and a try because we overplayed our hand on a transition when our work up to a point had produced kicking opportunities by pulling a backfield defender up into the secondary.

On both occasions, I’d have liked a back to step in and kick one of these downfield. On the last clap (00:52 seconds) you can see Parsons on the ball but she’s surrounded by multiple French defenders, forwards and backs. Sure, it should have been an Irish penalty rather than a French try (Parsons had her knees on the floor when she was stripped here) but we were always running her into traffic, such was our eagerness to get her on ball.

Why not kick long on these transitions to get Parsons spooking the French backfield defenders as they turn to collect a bouncing ball, especially when we were finding it very difficult to get collision parity, let alone dominance.

France, on the other hand, had the power to be able to play whatever way they wanted – they could “offload” because they were winning collisions. Look at the impact of their first big carry off #9 after finding width off the lineout.

That big gain line win off #9 collapses the Irish line and creates space for France to play into as the ball goes wide. The win the collision first and then offload to a runner in space.

Even the offloads in the wider channels follow the same principle – win the collision first, offload to the space created by the collision. It’s not a great tackle by Fryday here, to be fair, but she’s had to cover a lot of ground over the space of the last two rucks and Banet is a strong runner.

France were much stronger, yes, but Ireland’s indicispline at key moments, decision making and execution at halfback along with overplaying large stretches of our possession were a constant issue, for me. I truly believe that Ireland are much better than this scoreline suggests.

Despite the scoreline, I would hesitate to say Ireland were poor individually. The pack, in general, had a very tough afternoon out but it wasn’t for lack of effort or application. They put together two nice maul drives that lead to scoring scenarios but I felt our maul defence was very isolated and individualistic at times.

Our first counter-shove here, for example, had no pre-binds on the lift unit and no unit binds to each other so France were easily able to rotate our defensive unit out of the way almost immediately. From there, France had all the momentum and would score easily on this drive.

Our own set piece was fairly average on the whole – we struggled in the scrum and weren’t as accurate as we needed to be at the lineout, for the most part – and physically, we struggled to impose ourselves on the gainline against a very big and powerful French outfit, lead by the outstanding Safi N’Diaye. The Irish pack are certainly better than they showed here. That said, I thought Dorothy Wall showed up well in the physical exchanges on both sides of the ball.

The starting halfbacks (Dane and Tyrrell) had some decent moments but I felt their pass quality and decision making was a little below what I’d expect. They are clearly good players but they seemed in two minds at key points and Dane’s pass began to degrade a fair bit as the game developed. Stacey Flood showed a lot off the bench at #10.

I thought Eimear Considine was the standout Irish back by some distance. She looked solid in the backfield and took on a lot of our kicking responsibility on transition. She has excellent tactical instincts on top of being a really sharp handler and runner. She had a few turnovers with her kicking in the last quarter but they were good decisions, even if she didn’t get the bounce she was looking for on both occasions. ★★★★