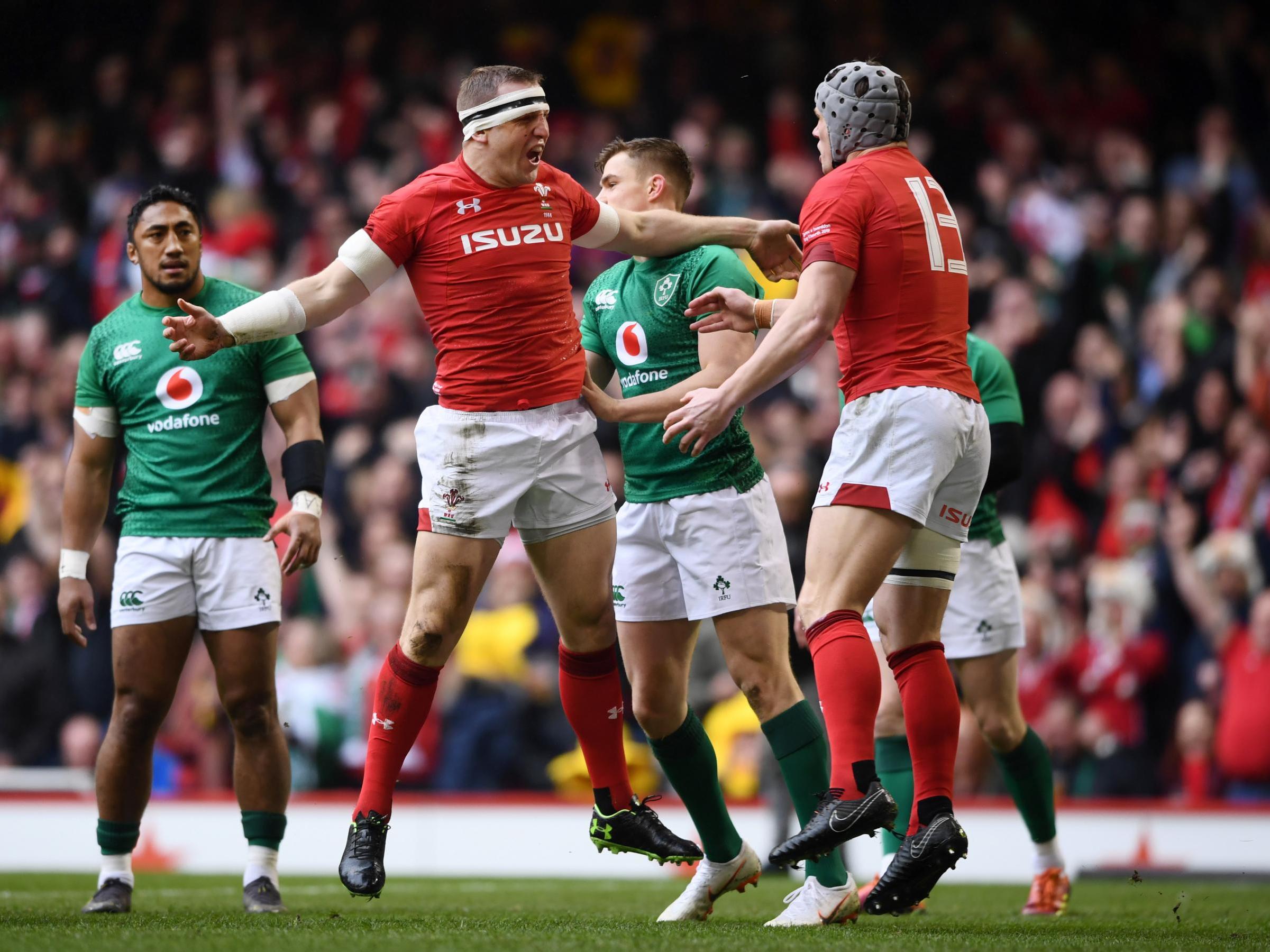 The scoreline with 10 minutes left showed you more in four words and two numbers than this or any article could convey with 3000 words. 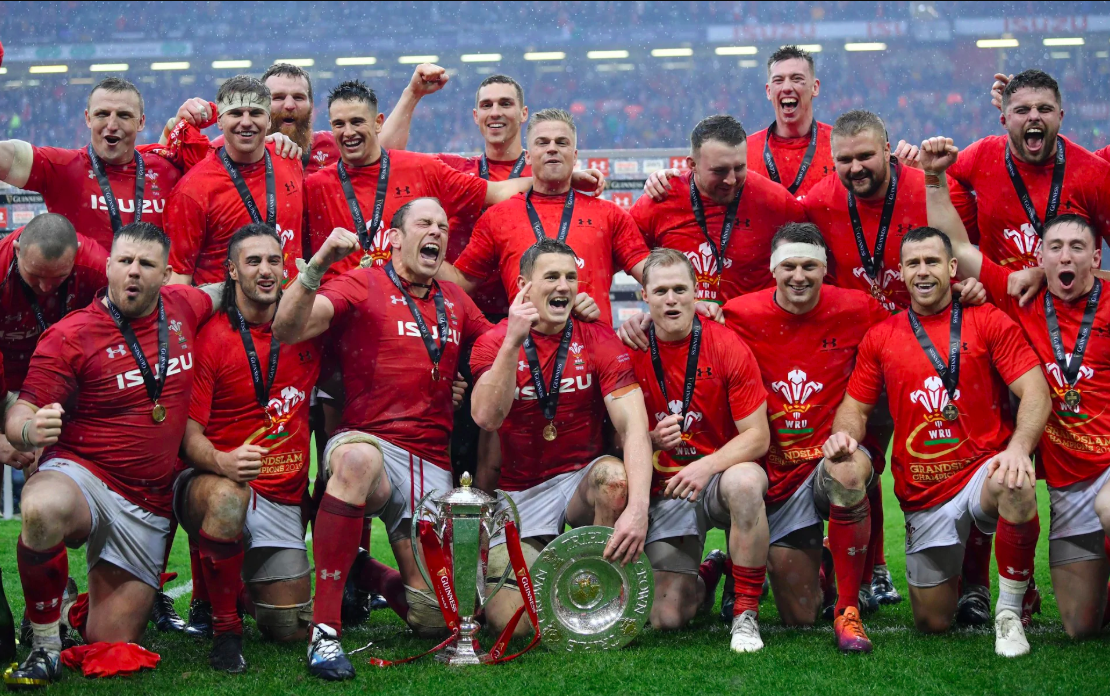 It didn’t finish that way, of course. Jordan Larmour scored a try with the clock gone red to save Ireland the embarrassment of being nilled, something we’d have been lucky to get given how absolutely nothing went right for Ireland from practically the first minute.

Wales were superb and made a mockery of the fiasco regarding the roof pre-game. It could have been raining metal spikes on Saturday and I still think Wales would have won but you’re not reading this article to see how Wales are now the defacto #2 team in the world behind the All Blacks and puts them down as potential winners of the World Cup this November. You won’t be here to read how this Grand Slam marks out Warren Gatland as probably the greatest coach of the last 20 years.

…WHAT DOES IT ALL MEAN? 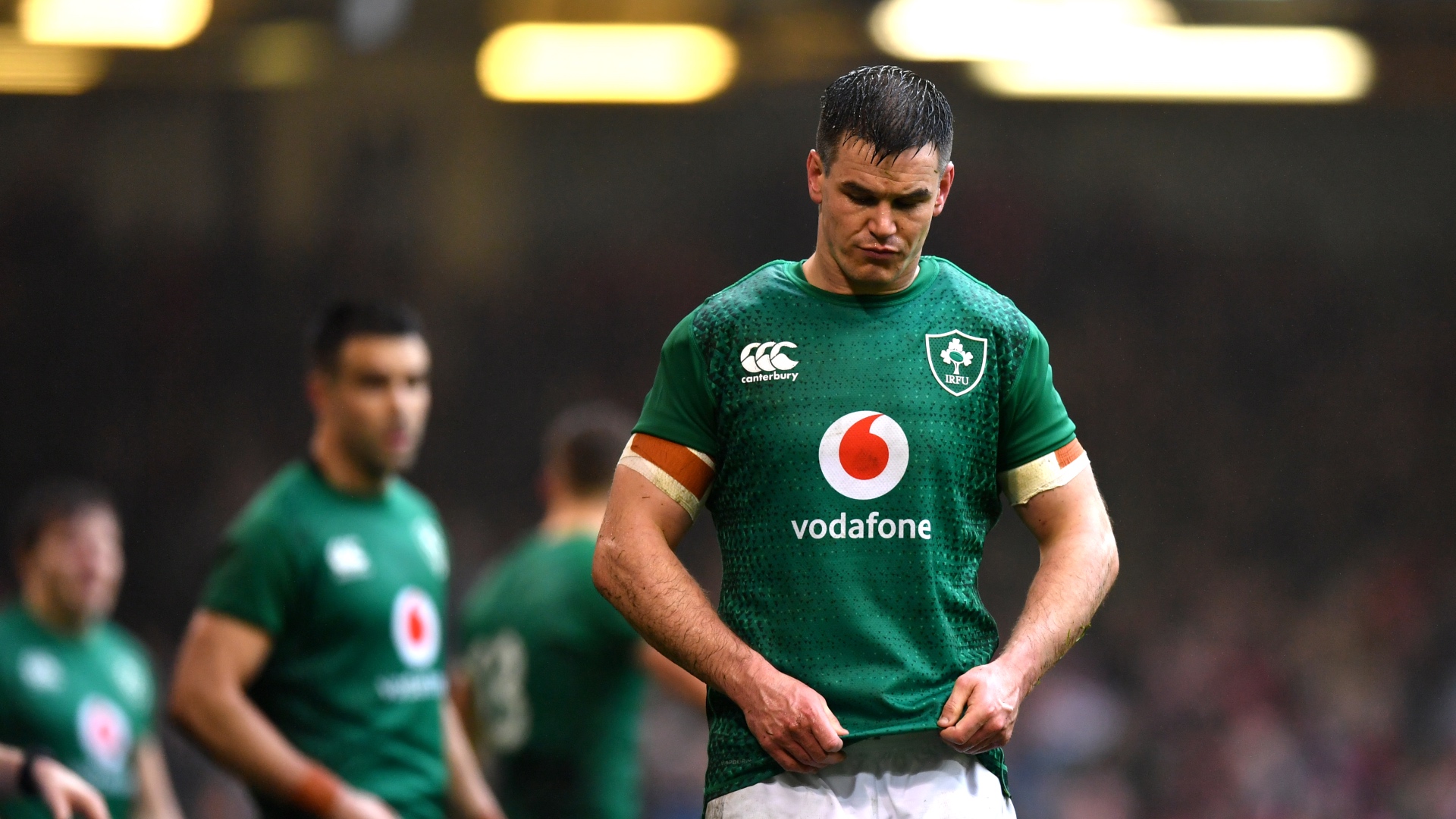 This was not a vintage Championship for Ireland but you know that yourself. The opening round loss to England at home seemed to rock a lot of the basics that we build our game around and we’ve been chasing perceptions and performance ever since. It’s a bit like when someone is asking you if you’re OK repeatedly. You might be fine – Absolutely Grand, in fact – but by the fourth time of asking you’re fit to throw the phone at the wall.

Ireland are working hard – only a fool would suggest otherwise – but we’ve been looking like we’re “forcing it” since after the Scottish game, where we performed much better than we’ve generally been given credit for and seemed to “revert” back to the game we would have planned for before the English mugging in the Aviva. That England game was a prime example of how our game falls apart when we can’t impose our physicality on the opposition but we managed to do so again against a dangerous Scottish side and win pretty comfortably. The game against Italy was a prime example of trying to find fireworks before we’d learned how to light turf on fire reliably again. The France game is tough to quantify all that much because France seemed to break early and, in truth, Ireland should have stuck 50 points on them.

This heavy defeat against Wales seems to be a product of the English game’s problem with physicality mixed the worst discipline we’ve shown in a number of months. Outside of the initial Welsh try, Wales didn’t really threaten the Irish try line bar when Tadhg Beirne pulled off one of his trademark Beirne-overs. This was a game that Ireland lost off the tee.

For all the talk of “hapless Ireland” in the aftermath of this game, we conceded one try in this game and 18 points off the tee.

I keep coming back to what I’ve written in my match notes after 20 minutes.

Almost everything Wales got in this game was earned off the back of our indiscipline. Some of those come down to a few iffy (and later inconsistent) decisions from Angus Gardner but mostly it was due to Ireland forcing our possessions and making poor choices with the ball in hand.

Here’s a good example of what I’m talking about.

Context: It’s 16-0 to Wales just after halftime. A big deficit, yes, but not impossible to draw back. An Irish try would put us right back in it, which you know if you can do basic maths.

We’d exchanged kicks with Wales and, with Kearney in possession, we went looking for centre-field ruck position on what was still a transition attack.

We got quick ball off the ruck, set Wales to a point where they’d have to split their defence to either side of the field and went to the next phase. Here’s the picture; 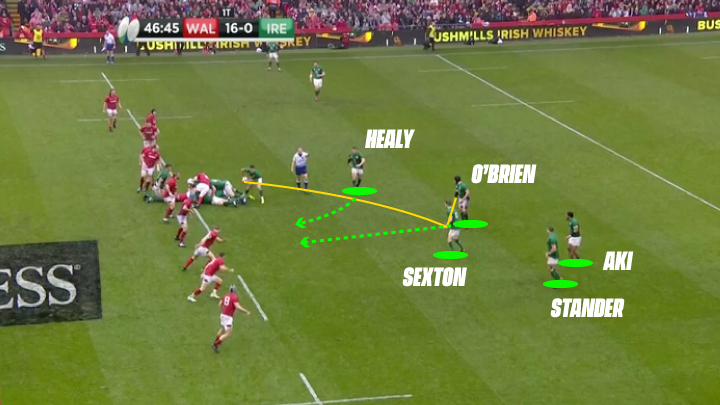 Murray hit Sexton, who popped the ball inside for O’Brien. Healy was coming around the corner to support O’Brien’s ruck. It was a conservative option that put a lot of pressure on O’Brien’s carry. Have a look at the phase as it plays out;

O’Brien takes the ball a little static – as if he wasn’t really expecting the pass – and loses the gain line badly. Healy gets blown for tackling Francis off the ball but we were putting ourselves under pressure with this option. The minute O’Brien didn’t get gainline, this was a Welsh “advantage” without the ball. Healy will get the hammer for conceding the penelty but once the gain line was lost, he was always under massive pressure.

This penalty pushed it out to 19-0 and essentially killed the game off.

In the first half, we looked like we recovered well enough from the initial shock of the Welsh start. We took the restart and set into a very familiar Irish pattern once we’d set a wide ruck point.

Look at Stander, Healy and Furlong settling into their individual roles here;

This is decent stuff – a heavy ball carrying pod lined up on a disrupted Welsh defence post-restart – and the animation from the three carriers is really good. 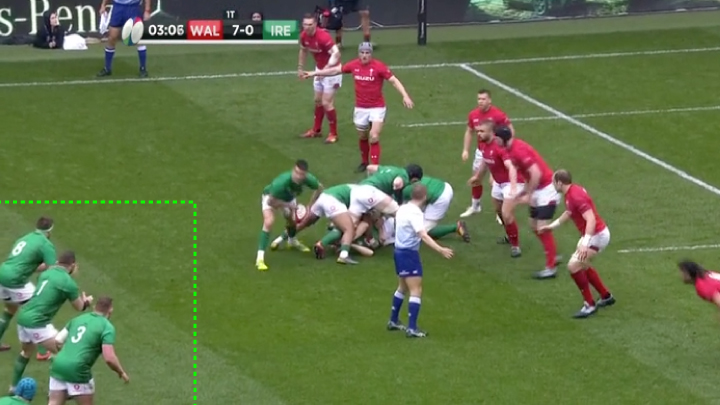 Wales have to press as wide as Furlong in this pod, and that stretches the Welsh “C” defender into making a hard press because of the danger of a tip-on pass. 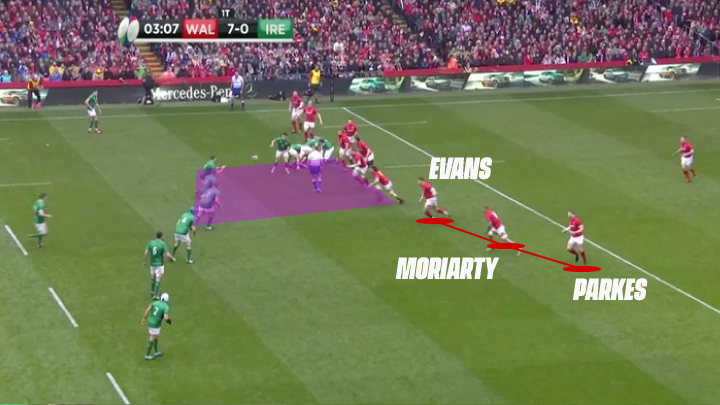 Unfortunately, Sexton was delayed on his route back from the kickoff so the screen option wasn’t there – I think Healy went looking for it and didn’t find it – but we were still in a good position. Ideally, I think if Sexton is behind the screen here we go wider off that first phase but anyway.

Good recovery. Sexton beckons Ryan in to narrow the Welsh defence and their subsequent ruck reset to launch the next phase and hopefully generate some isolations down the right-hand side as we’re looking at it here.

Let’s look at the next phase, but start from the previous phases;

For me, O’Brien could have possibly kept himself alive for the next phase on this one but we retain and when Sexton hits Aki we’re all out of narrow options. This isn’t the worst thing.

From there we come infield and then towards the right touchline again.

This pattern looks to attack the narrow Welsh front line defence and unbalance it. If we found a linebreak down the right, cool, but ultimately we’d be happy enough setting a ruck point to attack space on the far side of the field.

Wales leave a lot of space on these release phases off wide ruck positions with Davies and a winger covering a fair bit of ground on the outside edge. I think this is what Ireland were going after on this phase. Here’s an example that England found;

Everything Ireland had been doing to this point had been to move and then narrow the Welsh front line defence and the last phase got Ireland into the 22 with a full attacking reset in place on the next phase.

Ten phases in, this is exactly where Ireland do their best work. We had three phases built in and ready to go, Sexton about to reset into first receiver and Wales starting to widen up in their defensive set up. 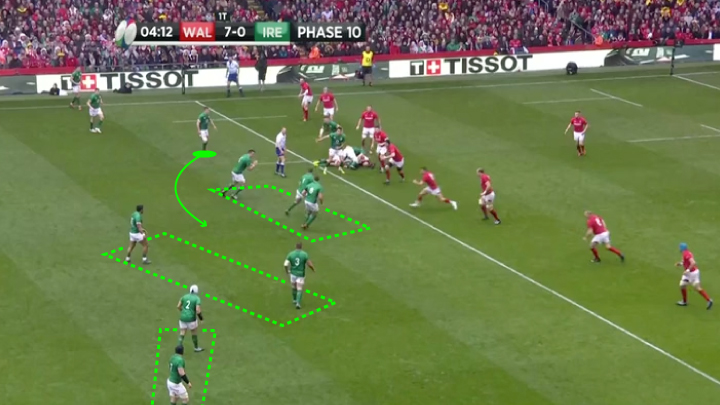 All we needed was to retain possession and we’d be in a great position to continue to pressure the Welsh defence into a close-range defensive set after 10+ phases of centre-field defence. Handling let us down.

It was a big early win for the Welsh defence and told the story of the game from an Irish perspective. We had good possession – 60% overall – but turned over the ball twenty times compared to Wales’ six.

When the game was being decided we lost the penalty count 10-5. Gardner evened up the count in garbage time but when it counted, our discipline was poor and the positions we conceded penalties were much more costly.

That’s ultimately where this game was lost. You can’t concede 10 penalties when the game is being decided – six of them in kickable range – while turning over the ball 20 times. I think Ireland had a game plan in mind for this game but just didn’t execute it properly. I think the route to success was in more kicking and lineout contesting, but we didn’t do enough of it from wider out in the line and, in some ways, conceding a try early put us on the back foot immediately and changed our approach.

A lot of talk post-game will focus on what this means for Ireland in the aftermath. Some – admittedly GAA writers for the Indo – are proclaiming that this is the end of Ireland and Joe Schmidt as far as the World Cup goes. I don’t think so.

Looking back at the Championship, I think Ireland looked tired, mentally drained and battling against the internal and external perceptions. The lessons we’ll have learned against England, Italy and Wales will be vitally important and the main work will be done in the aftermath of this championship. We know, now, what it looks like when our halfbacks aren’t firing (Italy) and when our ball carriers can’t generate consistent phase pressure (England) and what it looks like when our discipline and handling desert us (here).

If the adage says you win or you learn, we’ve had two distinct sessions under the learning tree this Spring. How we learn and what we learn will determine how Japan goes later in the year. Better now than then, right?

The Wally Ratings: Wales (A)

The stand out players for me were Peter O’Mahony, Tadhg Furlong, James Ryan and CJ Stander. Everyone played poorly here, don’t get me wrong, but O’Mahony’s lineout work and his presence on offensive and defensive rucks, James Ryan’s consistent physicality and Tadhg Furlong/CJ Stander’s workrate were the highlights in green for me.

I should explain the low rating for Sexton and O’Brien.

Sean O’Brien had a very poor afternoon. He would have been selected as one of our primary ball carriers but he just never got into the game in a meaningful way. His trademark impact on the gain line just wasn’t there and he looked a shadow of the player who tore it up in New Zealand on 2017. Very poor and nothing near what we know he can do.

Johnny Sexton had, in my opinion, his worst game for Ireland. Normally you can look at the speed of the ruck ball or quality of possession to mitigate a half backs performance but the ruck possession was quick here – quicker than the Welsh – and Sexton had plenty of ball interaction to turn things around, but couldn’t. He turned over the ball four or five times through uncharacteristic errors of his own making – passes to nowhere, kicks out on the full and blown restarts. Sexton looks like he needs a reset and some of the responsibility off his shoulders. He’s much better than this.