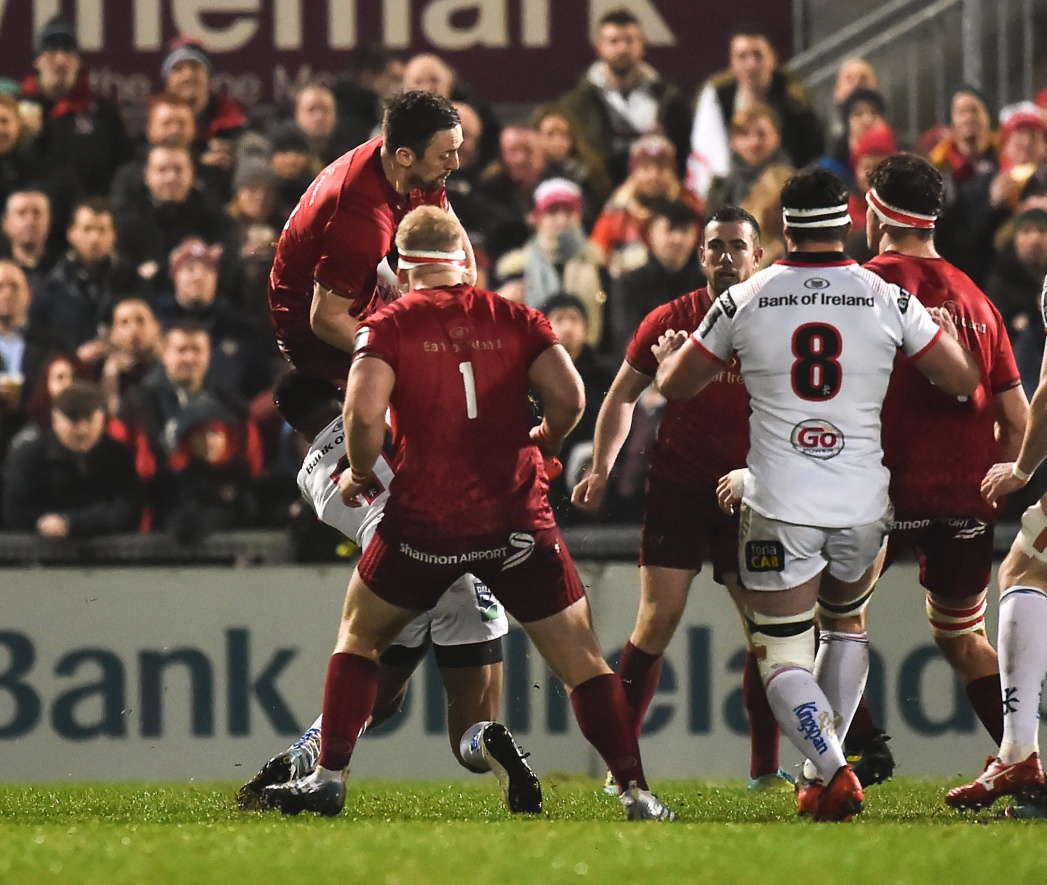 Belfast , United Kingdom - 21 December 2018; Darren Sweetnam of Munster is tackled high by Robert Baloucoune of Ulster for which he received a yellow card for in the first minute during the Guinness PRO14 Round 11 match between Ulster and Munster at the Kingspan Stadium in Belfast. (Photo By Oliver McVeigh/Sportsfile via Getty Images)

They call them Dropped Sock moments.

Basically, if you’ve ever had one of those days where you manage to keep it together even though you’ve stepped in dog shit, scraped the side of the car in Aldi and endured 45 minutes of traffic only to flip the lid when you drop a sock from the laundry basket you’ve had a dropped sock moment.

My dropped sock moment on Friday night wasn’t the red card that should have been issued to Robert Balocoune after 11 seconds, or that the same lad scored a try in the second half as Murphy’s Law would dictate – it was this:

Clear knock on by Ulster on the ground but the AR was unsighted, the referee was checking the offside line and, just like with WWE referees, the officials somehow managed to miss the fact the ruck was now over but turned around at just the right time to penalise Botha for a perfectly legal steal. Ulster would score the decisive try from the lineout platform that penalty gave them. Fume. Like a sock tumbling from the laundry basket, that moment was when I realised that this was not going to be another win for the Bad Guys after all.

It was a crystal clear Dropped Sock Moment.

Look, this kind of refereeing blunder could have easily benefited Munster in this game such is the general standard of referees in the PRO14 and, later in the season, I’m sure the wheel will turn and Munster will win the refereeing lottery. Sometimes you’re the hammer (the handy penalty try decision in the Toulon quarter-final) and sometimes you’re the nail (the last two weeks).

Refereeing nonsense aside, Munster were a little fortunate to come away with the bonus point, secured by Bill Johnston with the last kick of the game.

Despite the difference in selection – Munster made thirteen changes to their starting XV from the week before and twenty to the squad overall, compared to Ulster’s three changes to the starting XV and six to the matchday squad overall – this was still a game that the southern province could have won, with a little more accuracy.

“Accuracy” is the main buzzword around Munster in the last few weeks with “clinical” not far behind it. It’s starting to become an issue. Not an issue with a capital I just yet, but it’s getting there. Winning in the Kingspan is certainly possible but not when you’re spilling the ball in contact, on the floor and, almost more importantly, off the top of the lineout. Here’s a little megamix, with a spilt ball in contact for good measure.

Was it the throwing? Yes. Was it the lifts? Yes. Was it the timing of the jumps? Yes. Was it the handling at the top of the jump? Yes. It’s hard to put a finger on why the lineout just didn’t function at the level it needed to; that’s almost the point. It was a collection of errors. Some of that can be blamed on the conditions and some of it can be blamed on the new combinations in the pack but either way, it played a large part in the difficulty Munster had in building an attacking platform. It made running ball off the lineout incredibly difficult and that only served to exacerbate Munster’s issues hanging onto the ball in contact.

Munster weren’t able to get outside Ulster for much of the game and when we did, we didn’t have the hands to put it away. It’s a good defensive read by Addison here but the pace of the pass from Arnold to Wootton wasn’t what it needed to be.

Munster’s defence, for the most part, was quite good. Physical, well organised and imposing in the tackle for the most part. I thought Wycherley and Botha were particularly impressive in their defensive work but the manner of the second try will be worth looking at. Three players clustering on Best without stopping the ball created the spacing that Ulster needed to run in a killer score.

A mistake, for sure, but a fixable one. But it adds to the difficulty of getting the win against a strong, in-form, Ulster side.

For Munster, it’s hard to know what analysis to add to “hold onto the ball better” and “get a handle on the lineout” because that was the main difference here.

When the dust settles on this one, a losing bonus point secured in the dying minutes by a nerveless Bill Johnston kick will be quite valuable. In the context of managing your player resources over the course of the next two rounds of the PRO14, Munster will have already picked up a valuable point on the road with most of their elite starters resting up over the Christmas or away on short Christmas breaks. That leaves room for a strong selection at home to Leinster and more space for Connacht the round after.

Managing this Christmas period was always going to be tough but the game time absorbed by the likes of Wycherley, Coombes, Johnston, Daly and Loughman, in particular, will really stand to them. None of the younger players from this game had flawless games by any means – bar Johnston’s kicking – but they all had good moments that will stand to them as the season goes on. Depth-wise, Munster aren’t where they need to be just yet but they’re getting there. Not great, certainly some issues to work on but a decent result for an extremely rotated side.

The Wally Ratings: Ulster (A)

Not too many performances worth talking about here.

I thought Fineen Wycherley had a strong game with two lineout steals and some very good defensive work. A very promising young player.

Arno Botha was incredibly physical in everything he did and brought the kind of dynamism with ball in hand that we needed. Proving what a handy signing he is with every performance.

Bill Johnston came off the bench and had a few crucial involvements. His kicking from hand was good, his positioning was intelligent and his pressure kicking from the tee was the difference between a bad day at the office and a terrible one. Very encouraging.