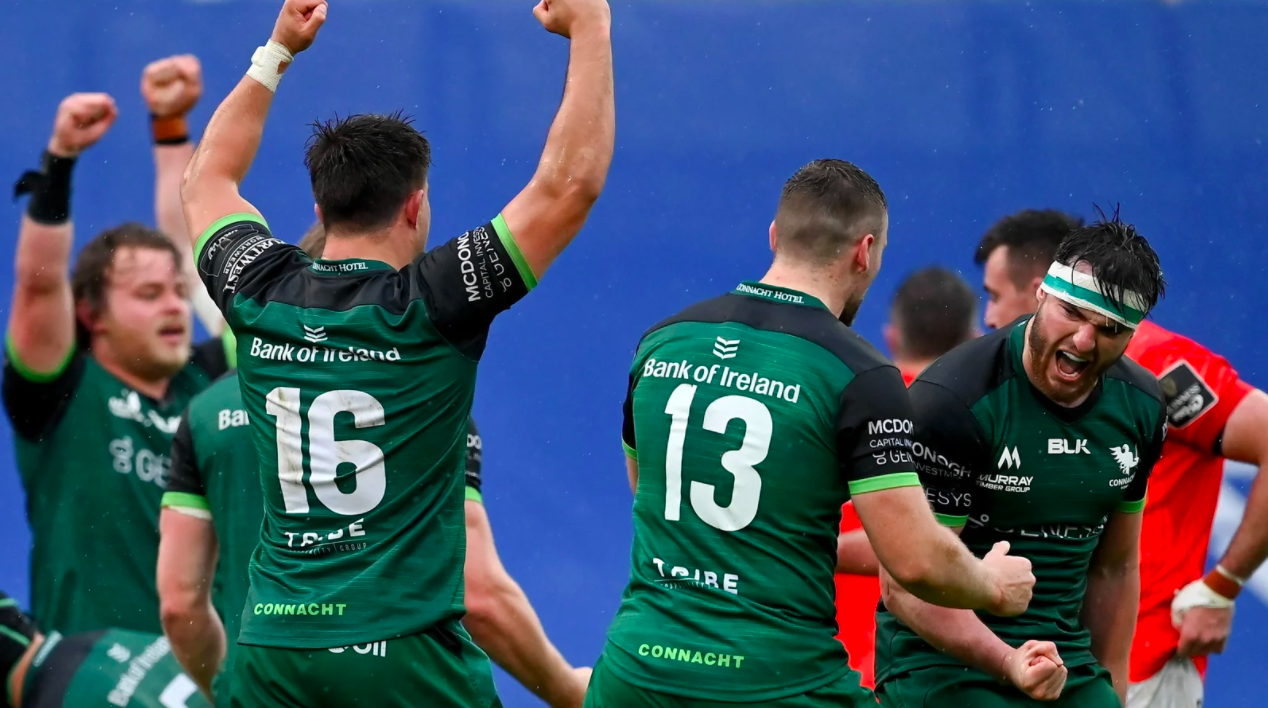 By Tom Savage8 min read
There are sloppy, disappointing losses, and then there is this game. I’ve watched the game back three times since last night and I’m still trying to process how Munster allowed this game to be lost. Make no mistake, this was a game lost because of key errors at critical stages on both sides of the ball.

What else can you say about a game lost by four points with two disallowed tries and two tries conceded through unforced errors?

Can any side afford to uppercut themselves to the point of conceding 14 points on either side of halftime on a day when the weather was going to worsen incrementally as the evening progressed?

Mistakes happen, sure, but these types of mental errors and miscommunications show a lack of the kind of clarity that was present against Leinster and Ulster. Jack O’Donoghue was late running back to his lifting spot on the restart after he took a bang during a carry in the build-up to our first try but even with that, our restart has to be better here. It’s the same on that second try scored on a counter-transition – we would have known that Connacht kick long to pressure out of their own 22 so our work on that first ruck after the runback would have been something that we could scheme in advance. What we got wasn’t good enough. Holland isn’t running a line to stall any player outside the man Casey is fixing, Healy looks slightly out of position anyway as he tries to swing back across and our wider assets don’t look fully locked in. Then, when the pass doesn’t go to hand, we’re left badly exposed in the backfield. Two mistakes made, fourteen points conceded

Even with these mistakes, Munster had enough field position to comfortably win this game in my opinion.

When other close-range opportunities presented themselves – and they did so repeatedly – low quality forward play and poor option taking from our playmakers cost us over and over again. If you aren’t converting these opportunities, the time you take to work your way into those scoring situations gets deducted from the rest of your efforts.

It would be disingenuous to not mention the standard of refereeing in this game as I felt it was a real factor in how the result played out. To not do so would be to ignore the elephant in the room, to a certain extent. CJ Stander certainly felt the same in that he felt it was like playing against “more than 15 men” – directly refereeing Dan Jones chaotic performance.

Stander can speak with the freedom of a man who’s retiring in a few weeks and I’m glad he did, in a way, because while Munster’s loss here shouldn’t have happened with the field position and opportunities we had, I felt there were a few key decisions that unbalanced the contest.

Ignoring a clear offside called by your assistant referee on a close-range offensive set is a brutal error but the laser focus on some of Munster’s poach attempts in key moments not being matched on the other side of the ball is the kind of inconsistency that drives players wild. If O’Mahony is getting stung for not supporting his body weight on the floor deep into his poach attempt and the same standard isn’t applied to Connacht during another key moment, it leads to the frustration that Stander spoke about post-game. This goes for both teams and coaches – all they want is consistency. If they can’t get it game to game, we’d settle for minute to minute or even half to half.

Don’t let these refereeing inconsistencies distract you from Munster’s poor performance, however.

Even with the bizarre officiating, Munster had enough of the ball and enough clear opportunities to take the officials out of the result but we couldn’t make the most of those moments while consistently gifting Connacht points and relieving opportunities.

The last two rounds of this tournament showed season-high performances for physicality and offensive efficiency and I called them as such. This game was one of the worst performances of the season in the same categories. Where we were decisive and clinical against Leinster and Ulster, we were muddled and wasteful here.

We were rarely able to impose ourselves on Connacht during phase play for very long. You look at the raw numbers of the game – 61% possession and 66% territory – and then at the pass to carry ratio, and you can see our narrow approach to this game relative to our last two contests.

Against Leinster: 1.3 passes per carry.

Against Ulster: 1.2 passes per carry.

Against Connacht: 0.8 passes per carry.

The more I watched the game back, the more it seemed like we were too focused on an expected collision dominance that didn’t fully pan out as expected. Sure, the loss of Gavin Coombes pre-game to illness didn’t help in that regard – it threw out our ball carrying balance considerably – but we were rarely able to generate a stable sequence of phases due to low-quality ball carrying, constricted attacking layers further out. Our maul dominance showed up, to an extent, but we weren’t able to get the same shove, penalty advantage, advance platform that Leinster were able to exert last week against the same opposition.

In some ways, it felt like we overcompensated for the expected weather conditions and collision advantage and that pulled us away from what worked in the previous two weeks.

The decisive moment of the game came with 12 minutes left on the clock.

I’m not going to bother with the “knock-on” the TMO managed to find at the last ruck but this try getting struck off seemed to kick the stuffing out of the team. We had other opportunities after this but they were never clearcut and always reliant on running over Connacht without a roster of heavy ball carriers to do so effectively.

This moment right at the end summed it up.

Archer’s carry isn’t the worst, necessarily, but I think we needed an energetic latch in this scenario to dominantly win the collision point and we didn’t get it. The ball presentation is poor enough given that Connacht weren’t competing at the breakdown (and wouldn’t be, in this scenario) but it seemed to sum up the game in one small moment – not strong enough, not efficient enough, always chasing a lead with the clock against us and, crucially, putting the referee into a position to make a decision.

In that context, this was a deserved loss. Picking up a losing bonus point could well be useful at the end of this block of games but don’t take that as anything more than the bare minimum expected out of a game at home against interpro opposition.

The squad will have a long two weeks to stew over this disappointing, eminently winnable loss which, while it doesn’t kill the remainder of the season by any means, served as a brutal reminder of the physicality needed to win these games. You either have it and win, or you don’t and you wind up lamenting the decisions that went against you.

Much better is needed.

My position before the game was that spreading game time around the squad was a good idea and consistent with the squad management we’ve seen during consecutive blocks of games over the last few seasons. The blend this week just didn’t work after being backed with selection, especially in the pack.

Billy Holland is and has been a fine player for Munster over the course of his career but this game was not one of his better moments in my opinion. The hallmarks of his game are usually nailing the basics – smart lineout calls, loading up on ruck entries, clever passing and technical strength in the maul. Those qualities weren’t really there this week.

This maul late in the first half was a good example; we took the ball right at the front so the lifting pod have to brace to hold the counter-shove and allow the big hitters to come around and power through. Our lift pod of Cronin, Holland and Ryan lost the first shove decisively and we were haunted to keep this in play.

We have been shown again and again over the last few months that physicality is king and your tight five wins you games. In this game, the tight five selected was comprehensively outperformed as a unit in every facet outside the scrum which, credit where it’s due, was a real threat in the first half.

Rhys Marshall played his third game of 2021 and looked a little rusty to my eye. While he took his try well at the back of a fast-moving maul, I felt the other parts of his game were lacking. Marshall’s accuracy at the lineout in crunch moments has been a work-on in his game for a while and it showed here again with two overthrows in key positions that sapped momentum.

The starting and finishing props did relatively well, for the most part, without necessarily standing out besides John Ryan and James Cronin’s excellent scrummaging in the first half that forced off Connacht’s starting props right before halftime.

Niall Scannell had a decent game off the bench and impacted Connacht physically with some good, powerful carries and solid work at the set-piece.

Our back row blend didn’t really fit for me this week. Losing Coombes before the game seemed to have a big impact on our ball carrying rotation. CJ Stander had a lot of carries but failed to generate much in the way of momentum. O’Mahony and O’Donoghue got on-ball a fair bit to mixed success but on the whole, it felt like two support forwards working off-role alongside a power forward who wasn’t getting over the gainline with the regularity we wanted on phase play or off the set-piece.

The starting halfbacks, Craig Casey and Ben Healy, didn’t have great games in my opinion but, as ever, half-backs are the product of the possession they play on and they were playing with sub-standard ball for the most part. To be fair they, for the most part, were either managing close range sequences or exiting and while the mix up that lead to the third Connacht try could and should have been avoided, they were at least trying to play on a transition.

Casey was the better of the two young halfbacks on the day, with some good exits, and his usual sharp passing the standout alongside a really good moment in transition in the first half.

Shane Daly had a frustrating day at the office after some good performances. His yellow card is just one of those things that happen to edge defenders in the modern game but every other ball that came his way seemed to bounce awkwardly just out of his reach, especially on the offload before the second disallowed try.

I thought Dan Goggin had a decent day alongside Damian De Allende on both sides of the ball. Both midfielders ended up playing more narrowly than I think they would have been with a stronger ball-carrying rotation in the forwards but did well in the physical exchanges and were a bright spot for me.

On the whole, though, this was a disappointing squad performance that should have ramifications for future selection based on the balance of the last three games.