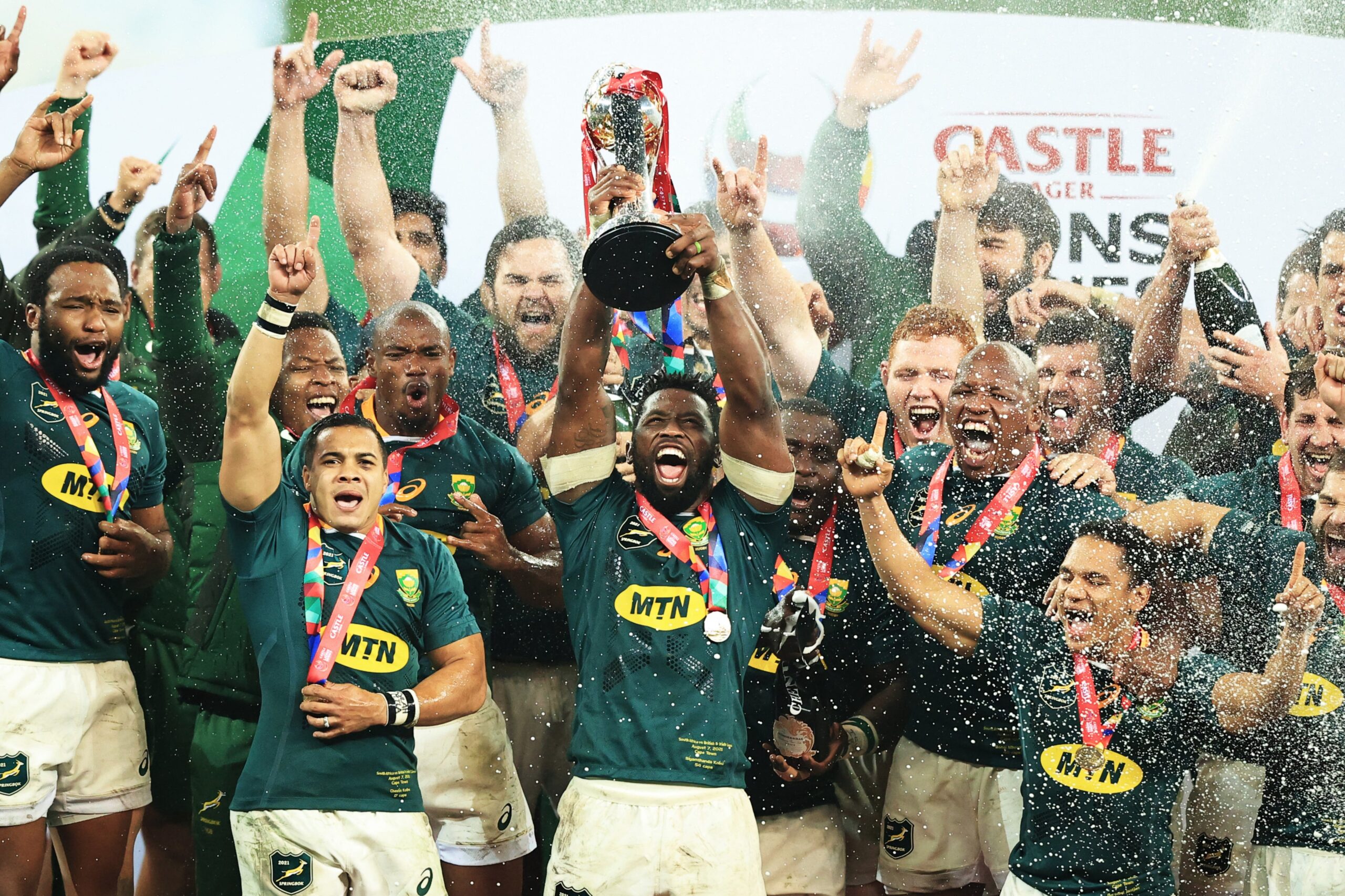 The longest, weirdest season that the game of rugby has put down since Foot & Mouth in 2001 came to an end in Cape Town with the Springboks, the World Champions, edging out the Lions by the kick of a ball. Morné Steyn’s kick of a ball, to be exact. Twelve years after landing the winning penalty off the bench in the second test in the 81st minute, the 37-year-old Bulls man just straight up did it again.

This time he managed to kick the winner with one minute ten seconds on the clock.

Just casual dead eye kicker stuff. Remarkably, Steyn’s experience against the Lions ended in a near-identical fashion twelve years later. The last time Steyn played for the Springboks was during a 57-15 home loss against the All Blacks in Durban back in 2016, to give you an idea of how far outside the solar system Morné’s Comet actually travelled to be standing over a kick to win the series in 2021. 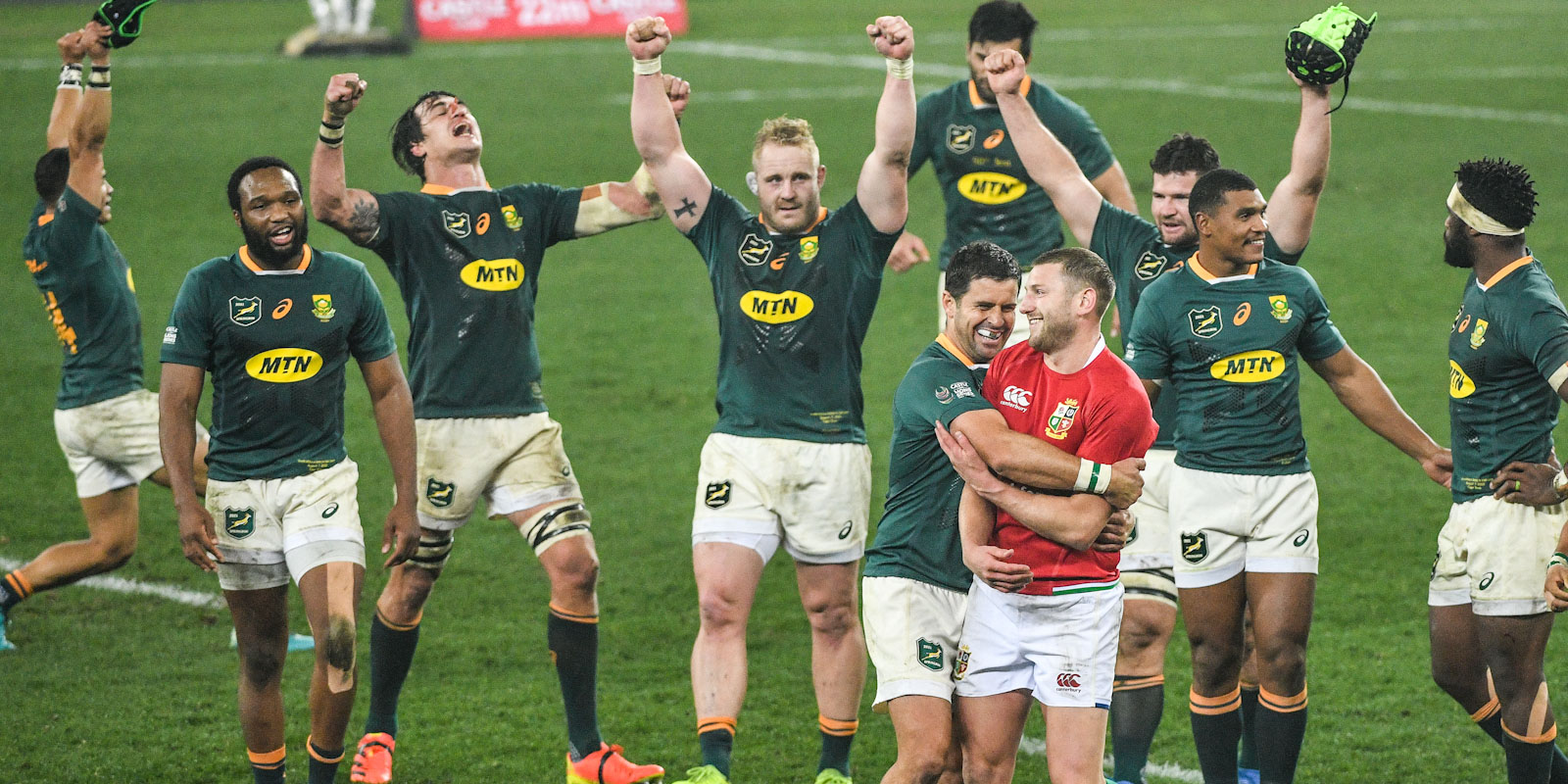 My initial takeaway on the full-time whistle was that it was good that South Africa won. I was happy for them. They played the rugby they are built to play and did it increasingly well as the series progressed. The Lions selected a squad pre-series that looked like it was built to a defined concept of how to break down the World Champions. The Lions we saw in the warmup games looked like they had Definitive Ideas on how to break down the Springboks and they duly dispatched Japan, the Sigman Lions and the Sharks (twice) before coming a cropper in the unofficial first test against South Africa A where the best offensive work they produced took place inside a window where the South Africans were reduced to 13 players.

What we saw in the test series seemed to me to be a reaction to the physical reality that the Lions had only dealt with in abstract until that point.

How can any expansive offensive plan work in an environment where winning collisions is this hard?

The initial scheme was likely a ploy to draw up the edge defender, keep him compressed to Am with the double inward carrying route of Aki and Henshaw hitting off Josh Adams. Dan Biggar would run a “blindside wing” like route against the grain of Henshaw’s line. 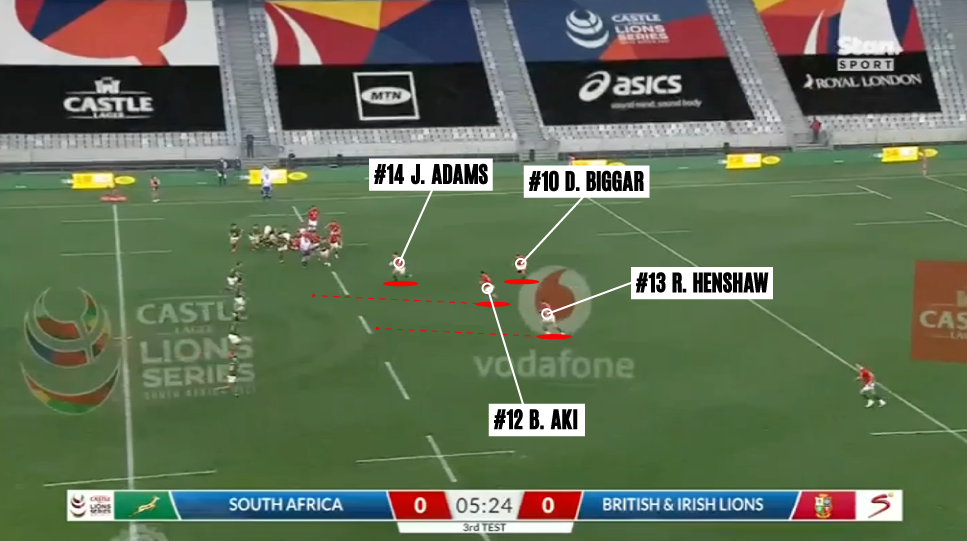 This, with quick ball, would have ideally locked Biggar onto the edge defender and opened up passing lanes to Williams and Van Der Merwe with snappier ball presentation and delivery from Aki and Price. 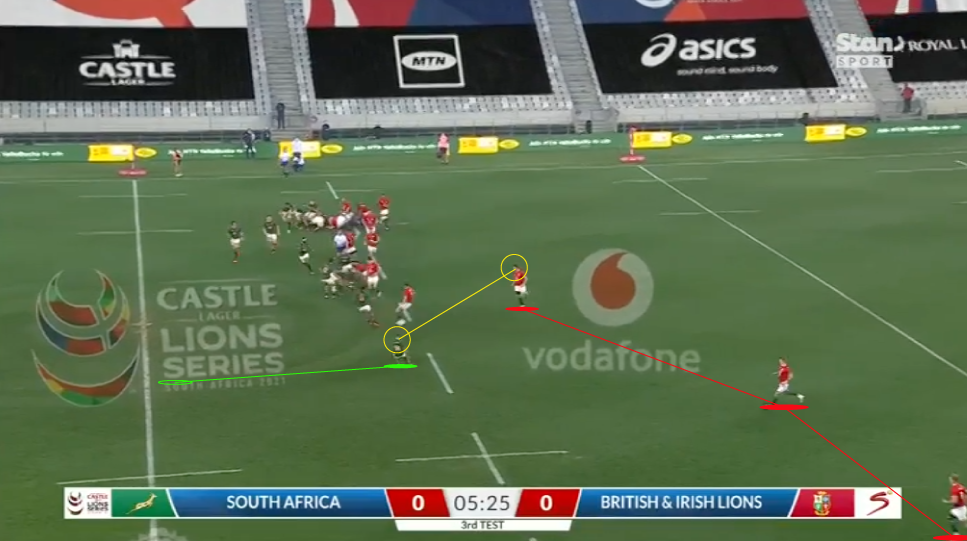 I would suggest that the Lions don’t score from this launch, but they’d have advanced the play considerably. Instead, they got locked into multiple collision losses and ended up kicking the ball away a few phases later.

This kind of collision environment hindered most of the attacking schemes that the Lions wanted to run and the schemes they actually did run but this isn’t anything unique to the third test – this was present across the entire series.

That puts a natural focus on the quality of the playmaking. This is a series that has been defined by a lack of verticality with the ball through the hands. Or, to put it more simply, the Lions found it difficult to advance the ball up the field with the ball in their possession. Yes, it really is that hard to crack the South African defence. Not only are they massively powerful hitters in contact but the clarity and organisation of their system make it difficult to open any windows of attack with regularity. After all, if it was easy to open up their defence, South Africa wouldn’t be World Champions and the Lions would have scored more than two close-range maul tries across three games.

In this test, the Lions got a solid look of what their playmaking might have looked like with Finn Russell running elements of the attack at #10 for the guts of 70 minutes. I wrote before the game about the Lions attacking hopes resting on their ability to draw out and then attack the hinges between the different stages of the Springbok defence – the near press, the middle press and then the edge press.

Russell’s base game – his passing range, his movement, his kicking game and his tendency to blend these together effectively – seems like a better fit to consistently find and execute in this position. It isn’t that Biggar or Farrell aren’t capable of being effective there, it’s just that they have their tendencies as players that, for me, don’t fully gel with what you need in that position.

Biggar, for example, is a better tactician on the whole than Russell when it comes to managing a game but I would rate Russell as a more willing puller of the trigger on certain plays and a guy who is more willing to make difficult, relatively low percentage passes.

That produced some decent moments for the Lions and seemed to agitate the Springboks defence for a time before they readjusted. Those first 15 minutes when he was on the field were certainly eyecatching for his ability to find movement for the Lions where there had been little previously, though, even if his prominence with the ball in hand fell back as the game progressed.

I still think that Russell was hindered – as Biggar was before him – by being the sole playmaker archetype for the Lions. Much is made of Damian De Allende’s narrow focus on impact defence, breakdown work, impact ball carrying and short/mid-range passing but when Robbie Henshaw – someone credited with being a much more rounded player – is put into a position behind a screen to make a killer pass in the second half on penalty advantage, he just doesn’t have it in his arsenal.

Maybe role sets and archetypes are important to take advantage of every moment that comes your way. That isn’t to say that Henshaw wasn’t the standout Lion on display in this game – and across the series as a whole – because he had two classic Henshaw breaks back against the grain to create point-scoring opportunities for the Lions.

Even with Russell’s fascinating intervention at #10 for 70 minutes, it was fitting that this series was, in part, broken open by a handling error, a kicking error in the aftermath and then a lethal kick transition attack.

When it came down to a narrow, physical game that had a high premium on scrummaging and kick pressure, you’d always fancy the Springboks and that’s how the game went in the end. A few big scrum penalties, a few pressured kicks and lost collisions and a dead eye kicker landing ice-cold daggers at key moments will win you games in those conditions.

And that meant the Springboks landed another series win and topped off the legacy of Nienaber, Erasmus and this group as a whole. The Springboks know who they are on the field and it won them a series. The Lions, on the other hand, did not and it cost them in the end.

Maybe we’ll get the lowdown on that eventually when the books come out.

The forwards didn’t play poorly as a collective but Wyn Jones, Mako Vunipola and Kyle Sinckler fell foul of the referee at the scrum for some costly moments.

Alun Wyn Jones return to the touring squad was part medical marvel, part heroic return and part roll of the dice by Gatland. On balance, I’m not sure it paid off. Jones work rate was clear, as it always is, but his impact was reduced against the toughest front five playing the game right now. I’d also question some of his decision making – if it was him making the decision – to repeatedly turn down kickable penalties all through the first half that, if landed, could have put the Lions out of sight. A legendary player, without question, but this series was not his peak.

Finn Russell is one of the most skilled operators in the #10 jersey playing today. The problem, for me, has been blending tactical insight onfield with that glittering skillset. Russell is a guy who is not afraid to pull the trigger with a run, pass or kick and that’s the main strength of his game. It’s also cost him in big games too because the more you do, the more that can go wrong. Here, he added reliable goal kicking when tasked to kick and some good tactical kicks late in the game when it was the right thing to do.

Robbie Henshaw was the standout player in red during this series. Itoje, the other candidate, had two ineffective games in a row while the Leinster man grew in importance and impact as the series progressed. This was just one example.

Henshaw is the ultimate big-game player and a guy who is the picture of the modern midfielder. I feel he would have been much better with a distributor inside or outside him over the series – a common complaint for Ireland too now that I think of it – but his work individually was of the highest standard on this tour and he’s comfortably one of the best players in the world, full stop. ★★★★

The Wally Ratings: South Africa (A)