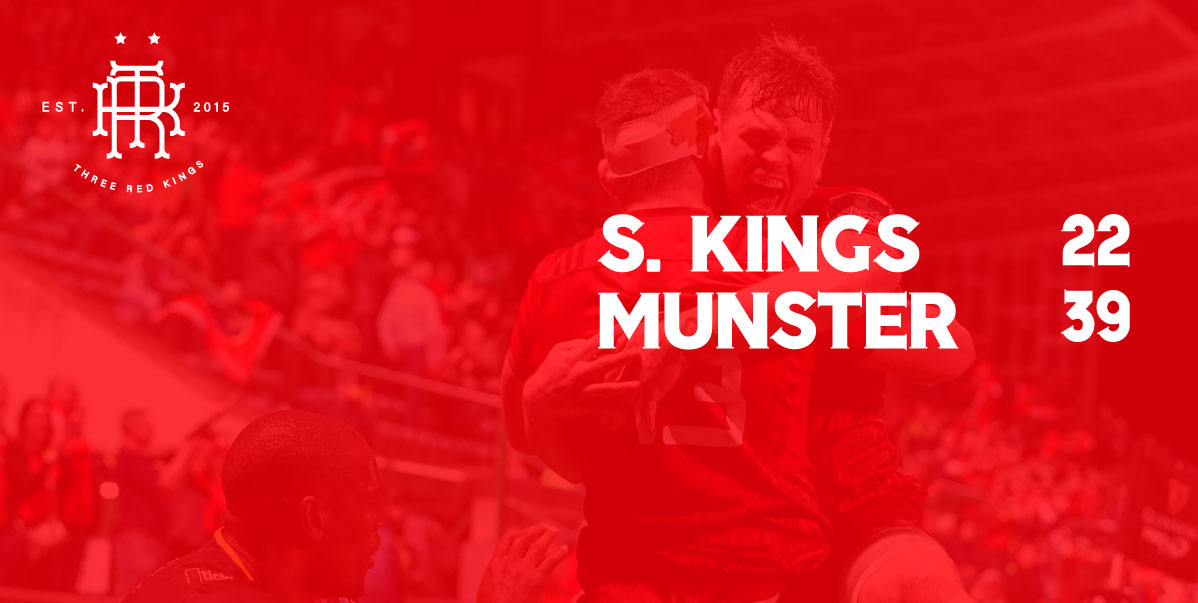 Outside a sticky 10 minute sin-bin period that saw the Southern Kings stretch ahead by 12 points, Munster cruised to a comfortable bonus-point win in George, South Africa.

What an enjoyable game of rugby that was. A bucket of tries – some of them genuine belters for both sides – and the kind of set-piece dominance that would stir the blackest of hearts were the highlight for me in a cracking game on the Western Cape. 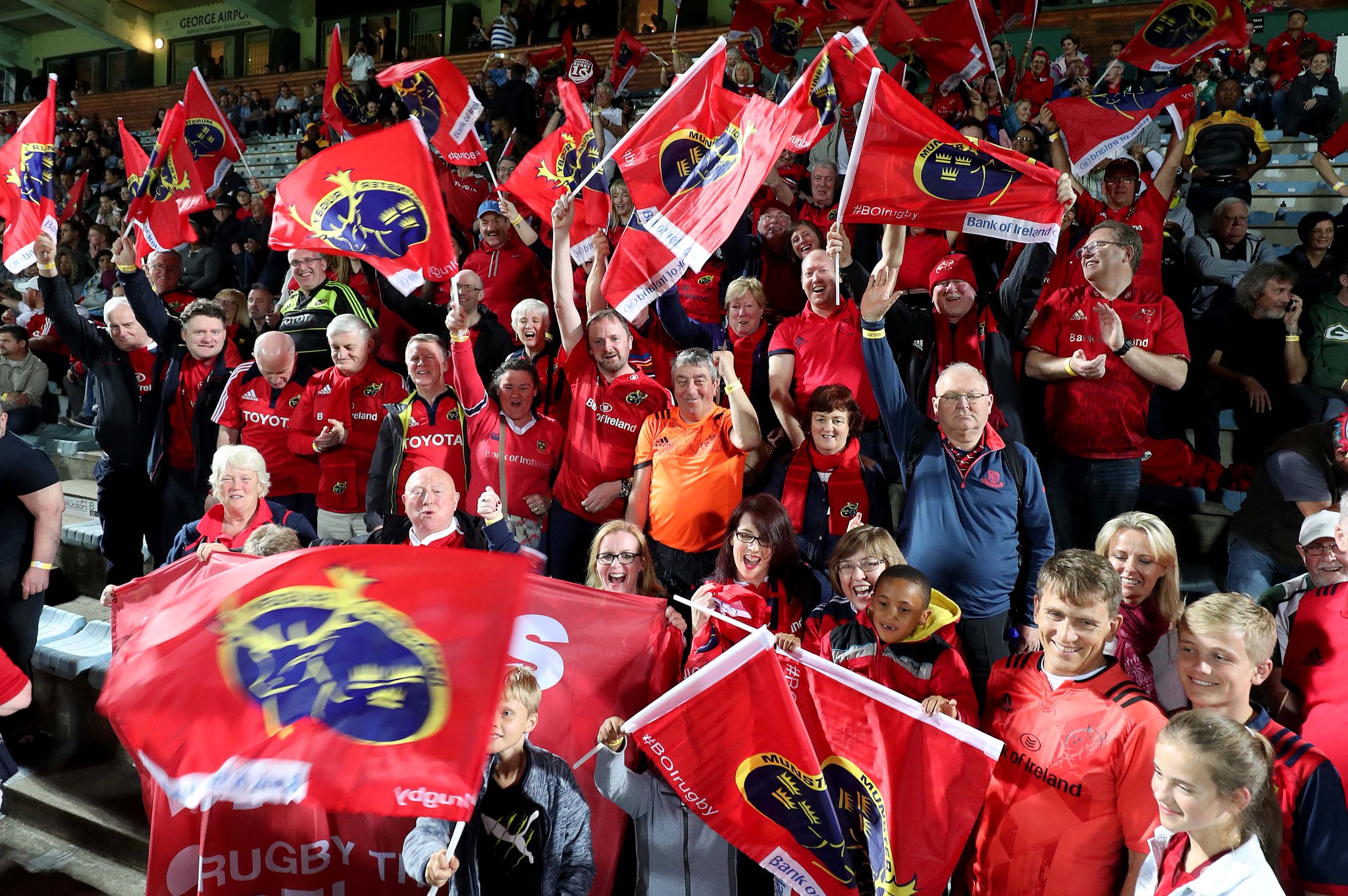 All in all, this game was a good illustration of the value that I think the South African expansion has brought to this league; energy, running hard-track rugby and a once in a lifetime experience for the ridiculous amount of travelling Munster fans. They’d find a way to attend a Munster game on Mars.

The contest itself far outweighed the billing of play-off challengers elect versus the side propping up the bottom of Conference B, even if the result reflected the gulf in status in the end.

When Munster found themselves 15-3 down after 35 minutes, there could have been ample reason for complaint. An iffy sin-bin for Gerbrandt Grobler saw Munster reduced to 14 men and the Kings took advantage superbly.

For me, this is a good cleanout on a guy holding onto the ball off his feet – he uses both arms to push Lerm away after making contact with his side. Linton didn’t see it that way, however, and Grobler spent 10 minutes in the bin. Referees have a tough gig.

Munster didn’t manage the sin-bin very well and the Kings used their wide running – and a slice of luck – to stretch out to a 12 point lead.

Their first try came from a stabbed grubber kick at an angle that was eventually put away by Ntsila but Munster will be annoyed that they spilt the turnover ball they won in the build-up.

Once the Kings recovered the ball and recycled, that caused a double transition that narrowed our defence and gave the Kings with a lot of space to work with on the recycle. They took advantage perfectly.

Their second try was actually scored against 13 men, as the break came in the aftermath of a Goggin head injury.

The Kings surged down the side that Goggin was receiving medical attention on post-head injury – you can see Nash sitting down slightly before recovering to make the tackle – but Munster won’t be pleased with some of the tackling after the reset.

Once Banda kicked a penalty on the edge of Grobler’s sin-bin, Munster were faced with a fairly stark scenario – get up the pitch and score.

When Stephen Fitzgerald and Calvin Nash combined on a kick return, Munster found themselves in position to do just that.

Ian Keatley stitched Munster’s carrying pods across the field – look at the structure on this sequence of phases – and, all of a sudden, we were fairly deep in the Kings 22.

This kind of pattern has been slowly working its way into Munster’s attacking style over the course of the season on big openside plays and this was as good an example as you can see without a clean line break. This kind of phase play gives you great field position and exploitable space on the reverse.

I wrote in the Red Eye about the Kings propensity to get caught with heavy forwards defending space and this is exactly the kind of multiphase movement that would expose them.

Once Munster exposed that space, we could start sending heavy runners into good matchups. There aren’t many bad matchups in the carry for CJ Stander but this one into Coetzee, Ntsila and Masimla was crucial for moving Munster into position to score.

Niall Scannell did the business a few phases later with Jean Kleyn adding some blunt force trauma behind him.

That saw Munster back in the game.

With the clock going red, Munster would go again with a stark display of set-piece dominance. First, Munster blew the Kings off their own ball deep in the Munster 22 with a massive surge on the tighthead side.

Throw in Kilcoyne popping Scholtz and you have a dominant Munster penalty against the head. Munster could sense a bit of give in the Kings pack at this point, and went down the line.

Again, I wrote in the Red Eye about the Kings susceptibility to getting peeled in the maul when they go in too heavy on the point of contact.

When Munster absorbed the initial pressure, the engine of the maul could stick the Kings infield and then peel around the outside for a massive 15m maul gain. That kind of maul dominance creates space to work with and Munster took that space and ran with it, with Fitzgerald again providing a line break jolt on the far side.

A massive Grobler hit up the middle exposed the Kings front five again, and Munster took full advantage by putting Nash through a gap for a second try.

Hanrahan’s weaving step before contact drew in Scholtz and Greef and sat down the covering scrumhalf before hitting Nash against the grain. 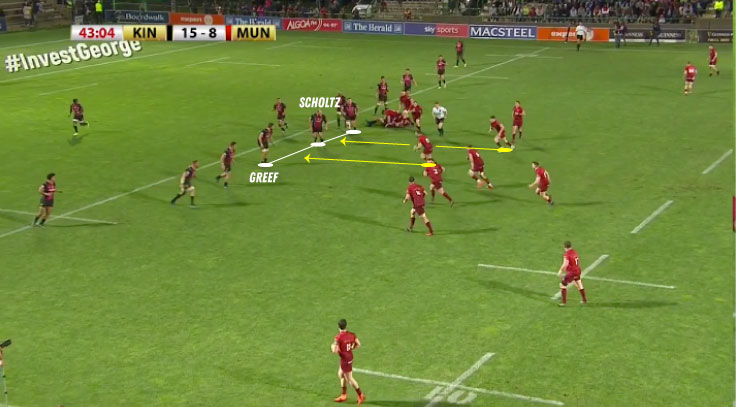 Nash’s finish from just outside the 22 shows exactly the kind of pace and aggressive running you’d expect for a guy as highly rated as he is in the Munster setup.

The second half continued in a similar vein. CJ Stander barged over for a close-range try after Ian Keatley spotted a familiar looking defensive alignment; 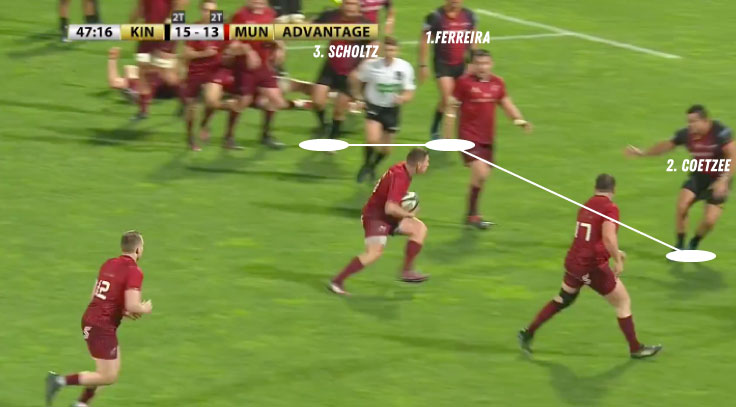 Once Munster had the lead, it became a hunt for a bonus point while guarding against the Kings ever present pace and width on turnover ball. When the bonus point finally came, it was at the hands of one of the best tries I’ve ever seen.

Just look at it.

Munster went the length of the field on a no-ruck counter-attack from 70m out. Ian Keatley picked up a loose ball from the Kings and was immediately looking to hit them on transition. He got the ball wide to Oliver, who hit Scannell and the rest is pure magic.

Nash’s pace and balance on the touchline, his offload to Scannell, Scannell’s outrageous behind the back pop, Goggin’s tracking line, shout, catch and pace to finish from 40m – this was as good as it gets.

With the bonus point on the board, the Kings resistance began to ebb away. Marshall and Kilcoyne added two more tries before the Kings scored a 70m scorcher of their own but it wouldn’t be too unfair to suggest that Munster saw out the game with relative ease.

This game had “banana skin” written all over – and in big neon lights after 35 minutes – but it’s a testament to Munster’s composure that, even at 12 points down to an energised Kings side out for a scalp, you never felt there was an upset on the cards.

This result confirmed a play-off spot. Now let’s roll onto Bloemfontein to shoot for a home quarter-final with a game to spare.

The Wally Ratings: Southern Kings (a)

As per usual, players are rated based on their time on the pitch, if they were playing notably out of position, and on the overall curve of the team performance. I didn’t rate Robin Copeland or James Cronin due to spending less than 10 minutes on the pitch.

A very decent performance by these lads.

Jack O’Donoghue and Billy Holland came on with the game mostly won and didn’t put a foot wrong. Brian Scott showed up well in the carry and looked like a real physical specimen around the field.

Conor Oliver and Dave O’Callaghan had efficient games in different ways. Oliver showed up well in the wide areas, while O’Callaghan got through a fair bit of dirty work in the tight exchanges. Neither man had stand out performances here but both looked very decent and worthy of further selection next week.

James Hart played quite well here but made a few iffy decisions at times, especially in the aftermath of Marshall’s break in the second half. He moved well ruck to ruck and has really dialled in with Munster’s tempo after a tough start to his career here.

Decent stuff all around.

Dave Kilcoyne, Niall Scannell and John Ryan had real dominance in the scrum to the point that every put in – on either side – looked a likely Munster penalty. Kilcoyne and Ryan brought real physical pressure around the rucks and in defence. Scannell took his try with the kind of close range grunt that’s become his trademark. He’s such a physical presence in the scrum and in the heavy exchanges.

Rhys Marshall had a great game off the bench and provides a different option around the field from Scannell.

I know the whole “blade and bludgeon” comparison is thrown around quite a bit but in these two hookers, Munster have a combination that can fit different aspects of a game plan depending on what’s needed.

Jean Kleyn and Gerbrandt Grobler were aggressive, powerful and did everything with the kind of bad intentions that you need against a South African side. Grobler’s carrying was really impressive and he punished Kings in defence again and again. Kleyn is the kind of powerhouse enforcer that every side with championship ambition needs.

His scrummaging and maul power was the main highlight for me but it can’t be overstated how important this guy is becoming.

Ian Keatley had an iffy start to the game but grew into the contest as it developed. He had a few poor passes, for sure, but he played a vital part in three or four tries. A good display. Jack Stafford came off the bench and looked sharp and decisive on the ball. Another encouraging display to back up his work against Zebre earlier in the season.

Stephen Fitzgerald made a real impact off the bench and had his best game for Munster to date. He’s young yet, but this performance based on pace and counter-attacking was hugely encouraging.

Calvin Nash looked really, really good here and improves incrementally with every game he plays. A real prospect, with pace and dog in contact to burn. His work in the build up to Goggin’s try and his own gives you a glimpse of what this guy is capable of.

Dan Goggin took his try incredibly well and showed he’s right as rain after his knee injury on the opening game of the season. He’s another excellent midfield prospect.

JJ Hanrahan had another good game at fullback and seems to thrive when he can strike from deep as a creative pivot. He had a big hand in two tries and looked solid positionally. Encouraging.

I thought Rory Scannell had another cracking game. If Toulon was about his defensive resolve, this game showed off his ability with ball in hand. He kicked well, stitched the play together excellently, carried hard and played two crucial roles in a try of the season contender.

Finally, I thought CJ Stander had a very good game. He racked up the hard carries again and played with the assured quality you’d expect from a Grand Slam winning #8. I thought his try from close range was classic CJ Stander – relentless, powerful on the verge of unstoppable. They could rename George as CJ and I doubt many would complain. Superb.

I’ll be covering Munster’s attacking structure and scrum dominance in this game all week on TRK Premium, which you can access for just €2 a month.