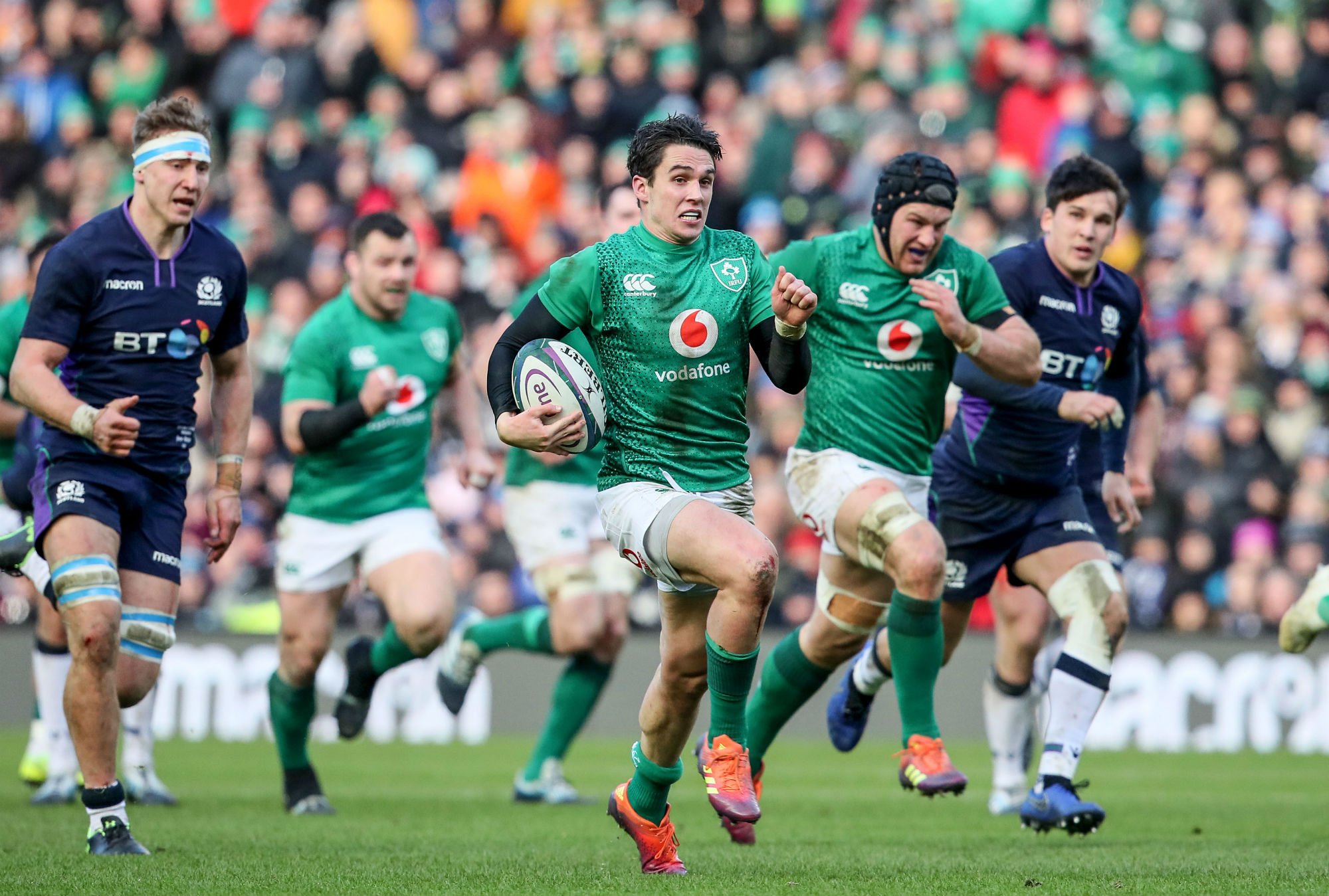 It was never going to be the movie script game of the chastened Irish heroes blowing Scotland out the gate as a measure of revenge for the loss to England.

Scotland are too good for that kind of fantasy stuff and playing away from home in the Six Nations is never easy. Murrayfield, increasingly under Cotter and now Townsend, is a particularly difficult place to go so for Ireland to win here with a 9 point cushion says a fair bit about the quality of the result.

Don’t get me wrong, Ireland didn’t play all that well here, but what they did do was revert successfully to the strongarm gameplan that provided such success in 2018. Our box kicking was poor enough, we turned over the ball sixteen times through a combination of botched running lines, poor passing and subpar handling but there was still enough in the tank to see Scotland off with a degree of comfort. It wasn’t a walk in the park by any means – especially in the first half – but Ireland will be happy enough with how the last quarter played out.

This game wasn’t – and never was – going to be about beating Scotland with running rugby and wide slung passing.

That might come afterwards, and certainly did for the Carbery break that leads to Earls decisive try, but that’s not how you beat Scotland from the start.

As per usual with Scotland (and for Scotland see Glasgow), the path to victory is to punish them upfront until they gas out and then pick off the scores when the spaces appear. Throwing the ball around against this Scotland side is a recipe for engaging in a shootout with the cowboy wearing the white clothes, toting ivory grip pistols and thumbing up a diamante studded hat.

To win in this game, Ireland would need to physically pressure the Scottish forwards and sometimes, that would mean going through the phases and banking the hurt for later in the game.

This was Ireland hurting Scotland in the close quarters and if you want a picture of this game, you just have to imagine Scotland’s forwards tackling the likes of Furlong, Ryan, O’Brien, Kilcoyne, Healy and Conan over and over again while being smashed in the tackle themselves.

For all the invention of Finn Russell, Sam Johnson and Huw Jones, it’s very hard to win rugby games when you’re looking to attack on kick transition and off lineout schemes.

Scotland’s kryptonite has been – and will be for the foreseeable future, in my opinion – enduring relentless forward pressure in games where they lose the possession battle. Five of Scotland’s forward pack made 20+ tackles while only two of their forwards made positive carrying contributions. In total, Scotland’s forwards made 66 carries for 90 metres with just under half of those (44) coming from Josh Strauss as a kick returning forward. Remove Strauss from the equation and you have 49 carries for 46 metres. That’s a tough return.

That was nowhere more evident than when Scotland were pressing inside Ireland’s 22.

This quick tap penalty was read perfectly by the Irish heavy defence and they drilled Scotland’s primary ball carriers back with real authority. O’Mahony’s shot on Wilson stopped him and his latch pod stone dead and dislodged the ball. It was a small moment in the game but it felt like a big win for the Irish forwards.

When Scotland were pressing again as the clock ticked towards the end of the first half, they met 26 phases of heavy, heavy Irish defence.

Scotland were dangerous when they managed to generate quick ball and an angle to work with but that wasn’t often enough to do the damage they needed to. The try count of three to one in Ireland’s favour reflects the nature of the game in some respects. A lot of what Scotland did behind the forwards looked good but wasn’t all that effective. A lot of what Ireland did looked ugly as sin but it still yielded results. Test level is like that sometimes.

The relative comfort of the end game came off the back of a bit of Joey Carbery magic and precision. The Munster out-half didn’t have a very good intro to the game when he came on for Sexton after the World Player of the Year failed a HIA. Sexton had just created a superb try for Stockdale but took a lot of punishment on the gain line as a result.

This Joe Schmidt Special was targetted at the speed differential between Scotland’s back row and front five as they transitioned across the field after the lineout. Italy tried a similar “against the grain” move last week, but Schmidt’s design was much more accurate.

The first pass to O’Brien is to draw out the mobile Scotland tail gunners before passing to Sexton, who can angle out and bring Farrell in with momentum for a dominant collision.

Farrell hits the Scottish midfield defence while they’re standing still and gets a big win. Aki’s drift across Farrell’s line means that Strauss and McInally can’t step into Farrell and have to take contact passively.

After the clean out, Ireland hit O’Mahony, who angles into the Scottish “C” defender. That, coupled with Aki’s line, clusters Scotland together to take contact – a trait of theirs – and that creates an isolation next to the ruck. Sexton comes against the grain and finds Stockdale for the power finish up the middle of the field.

You can see the shot that Sexton took after the pass and that was duplicated a few times in the build-up to his eventual substitution in the 23rd minute but I’d doubt he’ll will be complaining too much. Yeah, Scotland were sticking a few ones onto him but I’d be very reluctant to call any of the shots as being overtly wreckless. Sexton plays on the edge and on the gainline and that comes with the kind of punishment he took here. Hopefully he’s back in action soon enough.

Sexton’s replacement Joey Carbery wasn’t on the field five minutes when he threw an intercept pass when he thought he was on a knock on advantage before making another defensive error that took Ireland 26 phases to rectify.

Lesser players might shrink after such a ropey introduction but Carbery turned the bus around with some sharp carries, excellent touch finders and crisp distribution.

In the 55th minute, he effectively killed off the game for Scotland. He found a bit of broken field and scorched past a few flailing Scottish forwards – thank the Irish carries in the first half for that one – before swerving up the field and finding Keith Earls with a beaut of a pass off his right side.

Then, in the 68th minute, he drained another penalty to take the game beyond any realistic Scottish heroics. A bad start but a clinical, effective finish. Pretty much like Ireland as a whole in this game, in a lot of ways.

A lot of the talk in the aftermath will focus on what this means in relation to the loss against England. Are Ireland back? Yeah, kind of. Were Ireland at their best here? No. Does that take away from the achievement of beating a very game and very dangerous Scottish side in pretty much exactly the way they might have envisioned despite losing Sexton early on? No.

Ireland head into the fallow week with a spring in their step and the chance to get some vital bodies back in the two weeks before the game against Italy, where we’ll probably see a bit of rotation going on all over the squad. For now, though, there’s much to work on but much to be happy about if you’re Joe Schmidt.

The bus is back on the road.

The Wally Ratings: Scotland (A)

I thought the starting Irish pack had a mighty game.

Quinn Roux had a rock solid game. He called a super solid lineout, scrummaged excellently, tackled with real power and was one of Ireland’s top ruckers up the middle of the pitch. His physicality was exactly what Ireland needed.

James Ryan was back to his baseline in this game. 15 tackles and 15 carries at test level? All in a day’s work for a very special player.

Peter O’Mahony had a really good game too and deserved his Man of the Match award from Jamie Heaslip. He just bossed the small moments of this game. He dislodged the ball close to the line from the Scottish quick tap. He won the throw in the build-up to the second try and threw the pass against the grain to Sexton for the finish. Just a high-quality performance.

Sean O’Brien was a huge physical presence and looked close to his old self while Jack Conan was a real hammer in defence.

I thought Bundee Aki and Chris Farrell had very under the radar games here but both were hugely effective. Farrell was a constant worry for Scotland’s outside edge defence and Aki was playing a tireless, selfless role at inside centre.

Jacob Stockdale looked every inch the elite talent that his try-scoring record at this level suggests. His backfield positioning, kicking and work on loose ball was outstanding.

Keith Earls on the other wing was as impressive. His chase back for Scotland’s try, his defensive work in close quarters on forwards and his lightning fast support line on Carbery’s break were the mark of a top drawer player.

Rob Kearney showed why the challengers for the fullback jersey have to bring a lunch if they’re to dislodge him before the World Cup. He carried like it was 2009 and marshalled Ireland’s backfield with authority. One of those “people have written me off” style performances that he always seems to turn in. Excellent.

I thought Joey Carbery had a great game – eventually. Yes, there was a very ropey start – an intercept and a bad attempt at a defensive kick – but his class shone through in the end and had a decisive say in the finish. Another example of his growing prowess at this level.