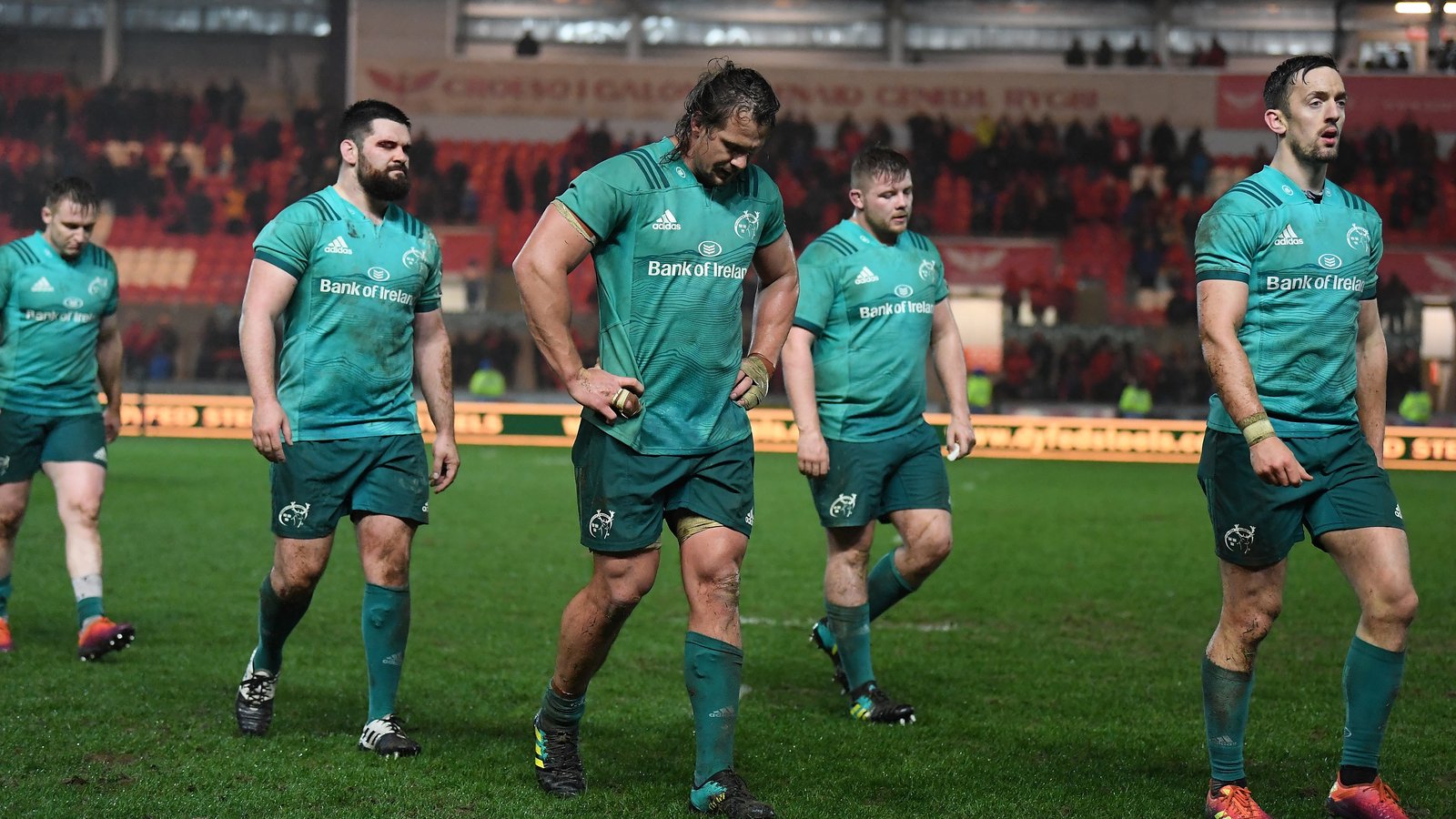 We’d enough ball to win two games but managed left Llanelli with only a losing bonus point for our efforts.

First, let’s acknowledge that Parc y Scarlets is always a difficult place to go and that playing in the kind of vertical rain and subsequent slip n’ slide conditions made it worse by quite a margin. The conditions, put simply, were ones you’d feel bad about putting the dog out in.

Any critique of Munster’s performance in these conditions has to take those conditions into consideration. They were bad, they added around 5/6 turnovers that we might have held onto otherwise and made playing any kind of wide structure difficult to execute. With that out of the way, let’s get to the critique.

This was a game that Munster will look back on as three points dropped once they get to the review. We had 80% of the possession in the first half, 70% of the possession and spent large chunks of time deep in the Scarlets 22. Yet we only scored 6 points and one of those from the handiest of accidental offside penalties.

It felt like a scant reward at the time, and in some ways cost us the game.

We can’t overlook the Scarlets’ defensive performance either. They racked up 246 tackles in total, with Ultair Cassiem hitting 31 successful tackles and four other members of their pack racking up 20+ tackles.

Time after time, Munster got into position in on the try line but time after time we spilt possession to lift the siege for the Scarlets.

Scarlets were tackling well, yes, but it’ll be our own errors in contact that will frustrate the coaching team most of all.

I counted 7 in my first run through the game, and that was just in the Scarlets 22. There were 15 overall and, while the Scarlets made handling errors too, ours hurt more because of where they were on the field and when they were made. The biggest part of our inability to convert our 4/5 red zone chances was the quality of our latching and driving (thanks @talkingtommym).

Too often our ball carriers were carrying on their own on the initial drive, only to be stopped by multiple Scarlets’ defenders and then, when the extra weight came through, we were unable to drive on with the underfoot conditions.

That paints a picture of how we were for a lot of the game – a little too slow from the base of the ruck for a lot of these chances and then a little too hurried on the next phase with our carries. We were half playing the conditions. Our alignment was good, our intentions were good, but our patience and execution weren’t.

Scarlets were making their tackles for sure, but too often they had a 2-1 advantage in contact in the initial collision and then the conditions did the rest.

Munster did have a try ruled out in the second half thanks to the softest case of “obstruction” I’ve seen in a while.

It was a nicely executed shift-maul in the conditions, but Rhys Marshall was adjudged to have prevented Keiran Hardy from making a tackle he really wasn’t that keen on making.

When you see a lad spinning out of contact like this, he’s looking for the TMO/ref to defend for him.

He rolled the dice and came up with sixes. It’s a handy enough one for the home side, but you expect that from Mike Adamson on the road and have to hope that they balance somewhat as the season progresses. I know I’d be screaming laughing at this bit of nonsense if the jerseys were reversed so I hope the Scarlets fans enjoyed this bit of impromptu modern dance from Hardy.

The truth of it is, we just didn’t play well enough on the day to get the win against a decent Scarlets side. Leigh Halfpenny was outstanding in defence for them, as was their backrow and midfield.

The Scarlets try – which was the decisive attacking play of the game – came in usual Scarlets style. I spoke in the Red Eye about McNicholls and Nicholas lurking in the second layer for the Scarlets and that’s how they came on their first try.

McNicholls lurked in the second layer attack for the inside ball and then popped the ball over the top to Nicholas.

There was a bit of potential blocking in the buildup – Cassiem preventing Scannell from tackling McNicholls – but that would have been soft enough to get in the circumstances. It made the aforementioned Hardy dance routine a little hard to take but like I said, you have to expect this kind of thing away from home and with Adamson reffing a tight game. We’ll have to choke down our medicine on it and move on.

Ultimately, a losing bonus point in Parc y Scarlets on one of the worst nights of weather we’ve played in all season – worse than the Dragons last month, even – isn’t the world’s worst result. The inaccuracy on our 5m opportunities will have to be looked at, and I’m sure it will, but given the weather, playing narrow, tight rugby was the smart call. We didn’t handle the ball well enough in the conditions and slumped to a losing bonus point when we might well have won and won well.

On the positive side, the lineout functioned really well and, if anything, we could have used our maul more especially in the first half when we were in the aftermath of winning three penalties on one attacking sequence. We quick tapped instead and lost momentum in the wind and rain. Tough stuff.

We sit three points behind Glasgow after their super soft five-pointer in Parma but three of our final four games are at home against teams we really should be beating. Glasgow have to face Ulster (H), Leinster (A) and Edinburgh (H) on their run in after their next fixture against the Cheetahs. Both Ulster and Edinburgh will be scrapping for playoff spots, so those two aren’t gimmes and any trip to the RDS is difficult regardless of who’s lining up in blue. Munster have Zebre at home next – should be five-pointer there, with all due respect to them – then it’s Cardiff at home, Benetton away and Connacht at home on the last day of the season.

It’s still in our hands to get what we need – a home semi-final – but there can be no more slip-ups from here.

The Wally Ratings: Scarlets (A)