The weather was so bad, you wouldn’t have blamed Munster for playing very “functionally” in Thomond Park on Saturday afternoon.

But we’ve seen “functional” Munster over the last few years and we know where it ends. That isn’t to say that Functional Munster wouldn’t have dispatched Dragons with a bonus point – they would have – but Functional Munster had a ceiling of European semi-finals and, with bad luck in the conference, defeat and recrimination in the RDS in May.

Defence – good. Lineout – good. Scrum – pretty good. Attack – average. Transition attack – unbalanced towards breakdown turnovers and well back on kick transition. Stephen Larkham was brought in to effect the latter two and it won’t be something that’s done overnight, or even over the course of one season.

If I was to sum up what I felt was wrong with Munster’s attack last season, it was that we seemed too reliant on step by step attacking patterns. It works on most of the sides we’ll face during the year but it had reduced effectiveness against the top sides in the PRO14 and Europe. In my opinion, that style of attack required a player-set that we don’t have at Munster at the moment and the remedy is to look at our attack as an overall sequence rather than Phase 1 > Phase 2 > Phase 3 > Phase 4 > Phase 5 > Kick Reset. Ultimately, I think that with the squad we have in 2019 we need to see more passing, width and depth. It doesn’t mean that we won’t box kick, or kick for territory/position, or grind it hard around the corner when necessary, but it will mean that we’ll look for more suitable attacking structures to play to where we’re actually strong, rather than where we’d like to be strong.

I’ll get to some of our structures in this game later, but I wanted to highlight two or three examples where I thought we looked a little different from last season. Have a look at this (deep breath) wide strike from centre-field position off a kick transition.

That’s exactly where I’d want a power runner like Jack O’Donoghue getting his hands on the ball and his intention to pass out of the tackle was nice to see. Notice anything different?

Look at the depth before we ever get the ball. 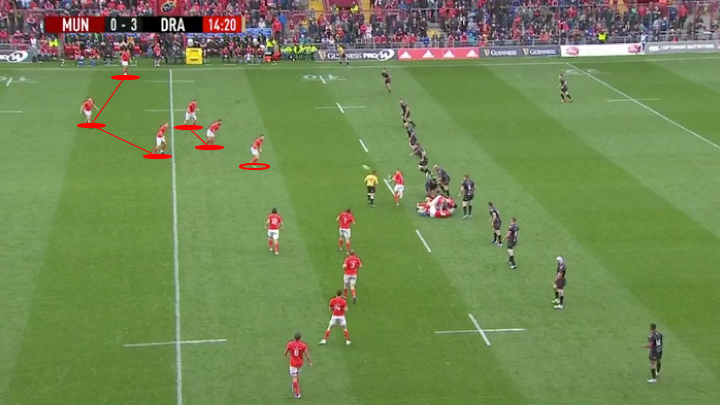 Hanrahan has a number of options to work with here and the confidence to look for a wider runner. When the ball hits O’Donoghue, O’Byrne and Scannell aren’t sitting on him looking to secure a ruck at all costs – they’re looking for an offload. 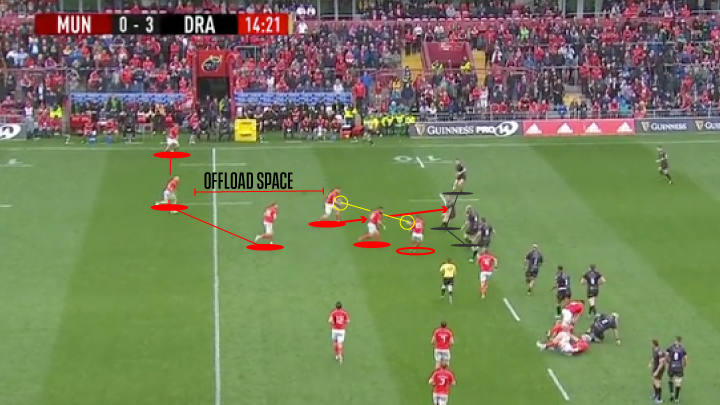 As Hanrahan releases the pass, Scannell/Daly retain their depth and leave a pathway for O’Donogue to pass back to. “Flat” offloads are a difficult, low percentage skill with exact timing and a very small window for the passer to work with. 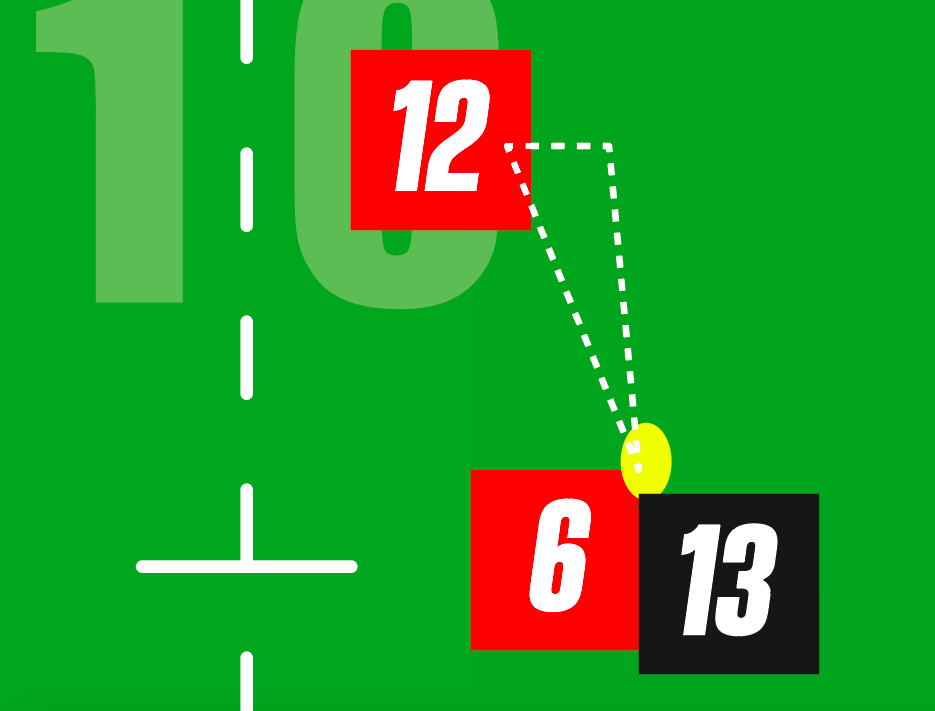 Deeper offloads allow the receiver to turn out (or in) and “aim” for the deeper runner with a larger window to aim for and more time to hit it. 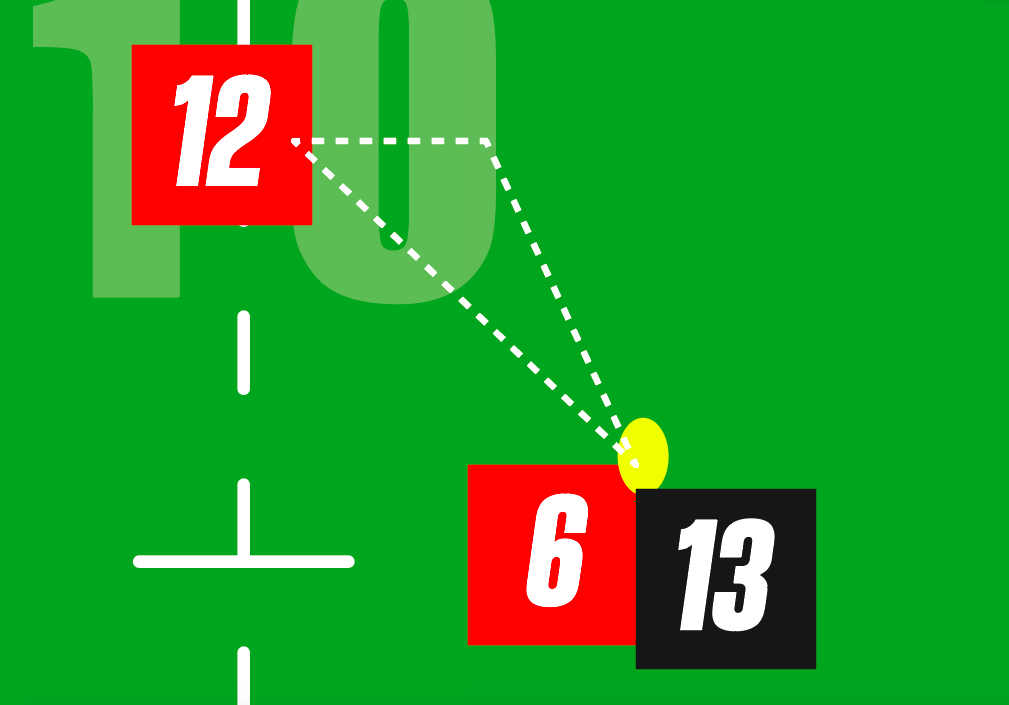 And the beautiful thing is when you do it right, it’s as hard to defend as the flat offload while also giving you advancing ruck support in a way that flat lines don’t.

We were looking for this kind of deep-line offload throughout the game.

Fineen Wycherley is on a cleanout line here but he’s also alive to any pass out of contact, and when he gets it he makes 3/4m in heavy traffic because of how hard this kind of line is to defend. You can know it’s coming but when it’s done well, it doesn’t matter.

The build-up to Jack O’Donoghue’s try – the line break that created the platform, to be precise – came from a deep-line offload from Botha to O’Byrne.

The width and depth that O’Byrne gets on this move is deliberate. Watch him time his run – he’s expecting the offload to come and attacks the space where it would be the most dangerous to receive the pass. He gets the reward.

It’s hard to get an exact picture on our overall forward structure in this game given the conditions but we seemed to use an asymmetric 2-3-2-1 on a lot of our phase play. I wouldn’t get too wrapped up in these formations as we were quite fluid in our positioning for the most part and eager to get all of our players around the corner at pace, especially off the set-piece.

Look at this off a lineout (ignore the hit from Hibbard at the end);

Daly made an excellent surge around the tail of the lineout into the seam between the #10 and the last forward. We get really quick ball and hit O’Donoghue coming around the corner at pace. I highlight this because it’s something we didn’t see nearly enough of last year.

Watch this in the build-up to Bleyendaal’s try;

O’Byrne’s pace, footwork and passing accuracy are the stand out factors to me here – he’s the key guy in this scheme. His initial pass from the rear of the maul to Scannell is an absolute beaut. It took out three defenders and if it came from a centre, you’d be ecstatic with it. The ball is so quick after Scannell’s carry that Dragons can’t recover from the initial linebreak.

But look at the work as the ball comes back off the ruck.

O’Byrne moves laterally across Botha’s inside line. Botha holds the inside man for a split second and O’Byrne’s show and go holds the space for Bleyendaal to finish.

Look, there was a lot of good here. That isn’t to say we didn’t kick the leather off the ball as conditions demanded – we 100% did – but our ability to maximise our possessions in such manky wind and rain was hugely encouraging. There will be dips in form and results as we set out with this style but if it clicks as hinted here, we could really be onto something.