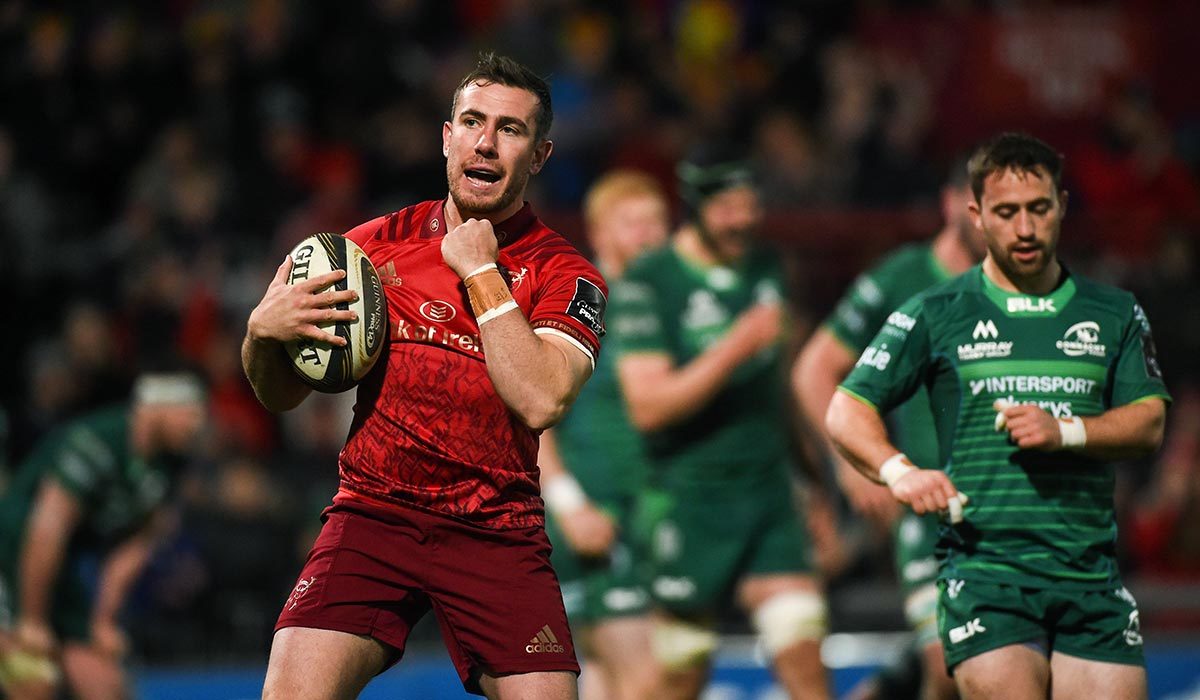 27 April 2019; JJ Hanrahan of Munster celebrates after scoring his side's third try during the Guinness PRO14 Round 21 match between Munster and Connacht at Thomond Park in Limerick. Photo by Diarmuid Greene/Sportsfile

At the final whistle, nothing had really changed.

Munster had won, Connacht had lost, but events elsewhere meant there was no last day movement in Conference A. Connacht were playing Ulster next week – of that there was no question – and Munster would play Benetton, something that seemed likely for the last two weeks if everything went to form, as it did.

The game itself, once we remove the potential ups and downs of Conference A from a Munster perspective, was a pretty good one played out in front of a crowd of 19,999.

I’d hesitate to say that Munster were impressive here – they weren’t, at least not for long stretches – but they will take a bit of solace in how well they performed despite losing the territory battle, the possession battle and penalty count 13-6.

Those statistics go some way to explaining why Munster didn’t seem to do an awful lot in this game but what they did do, they did relatively well. Our overall attacking potency was questioned in the aftermath of last weekend’s defeat to Saracens – and rightly so, I might add – but Munster seemed to respond to that here with some incisive looking strike plays off the lineout and in transition.

Our second try came off a transition play when we quick-tapped a breakdown penalty. Two phases later, we had the isolation and alignment we were looking for.

This was really good stuff. Scannell’s handling to get the ball wide to Haley set up the whole structure of this try and Haley’s slight angle to fix Butler before hitting Conway for a one on one with Copeland on the edge of Connacht’s defensive line was perfectly done.

Conway, looking to make up for an earlier error – I don’t have to tell you which one – scorched Copeland, fixed Fitzgerald and put O’Mahony away on the flanks. We often see O’Mahony on the edge of these attacking structures – think of his work in the Ulster game at this very stage last year – and I suppose questions could be asked about why don’t manage to use his skillset more often.

Look at his pace and passing ability here;

That pass inside to Haley is a killer for Connacht – he doesn’t wind up, there’s no fat on it and it goes exactly where it needs to be.

Munster’s first try came inside 3 phases after a lineout and seemed to echo a try we conceded last weekend.

First of all – Beirne’s sidestep and athleticism here is something else. There really aren’t very many second row forwards in the world that can finish this try in the way that Tadhg Beirne did but it was the manner of his break that caused a bit of controversy.

Connacht were looking for a blocking penalty after Kleyn’s decoy/option line hit Copeland in the “C” position.

This doesn’t look like blocking to me. Sure, Munster are looking to exploit this space with Cronin running a line at the “B” defender while three forwards cluster around the point of the ruck.

Bealham can’t track Cronin’s run because he’s concerned about an inside pass to Stander by the fringe of the ruck. That opens up Cannon for Cronin. 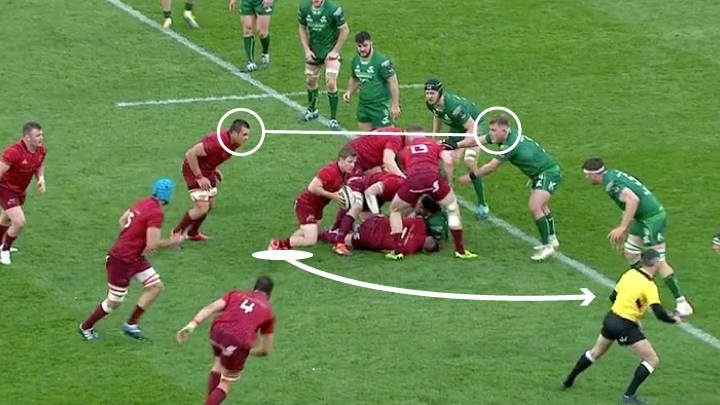 When Kleyn ran his heavy line – and remember, he was a legitimate passing option right up until Beirne snatched the ball and attacked the gap – it was the space created by Cannon biting in on Cronin that causes the problem for Connacht. 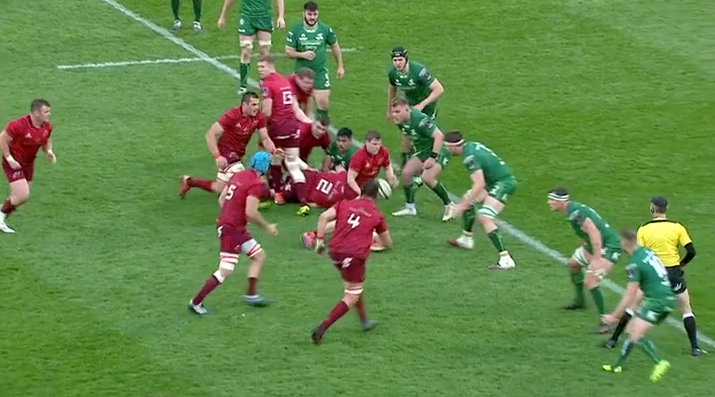 It was a well-taken try focusing on overloading Connacht’s forward numbers in the aftermath of a narrow punch lineout. You can see Dean (Green #10) creeping into shot in this picture and this narrow fringe overload would only work in this position at the line between Connacht’s forwards and backs.

Our third try in the second half came from a transition attack off a Connacht handling error and featured some lovely offloading and an excellent finish from Hanrahan.

This is kind of offloading accuracy is incredibly hard to defend and it set up the finish for Hanrahan, who took the chance without much in the way of fuss.

His step is lovely, but watch Beirne’s hard cut-off line at the fringe of the ruck to help make the space for Hanrahan to slice inside without worrying about a covering tackle.

We did blow a 5m opportunity after some hesitant work at the base from Cronin and then a handling error but overall, we were pretty good. In some ways, the longer we had the ball the more problems we seemed to have. As the season has dragged on, I think our shape on multi-phase possession has become an issue, especially when we don’t have Carbery operating in and around first receiver. We’re not a bad attacking side – we’re better than most in Europe and the PRO14 – but it’s how we perform against the Leinster/Saracens of this world that will define our season and our attack being at that top level is crucial to that. Inside three phases, I think we can trouble anyone on our day but we’ll be fully at the level we want to when we’re troubling everyone every day.

Where are Munster ahead of a quarter-final with Benetton?

It’s hard to say with certainty. The Saracens’ loss has been wiped away – for now – but if we can get beyond the Italians to book another date in the RDS on the 18th, those questions will pop up again for us. Have the lessons been learned? Do we have enough to beat Leinster in the RDS this year and then beat Glasgow/Ulster/Connacht in a PRO14 final? I think we do but we’ll need to show the accuracy we showed here on some plays and scale it up. We’re in the end game now.