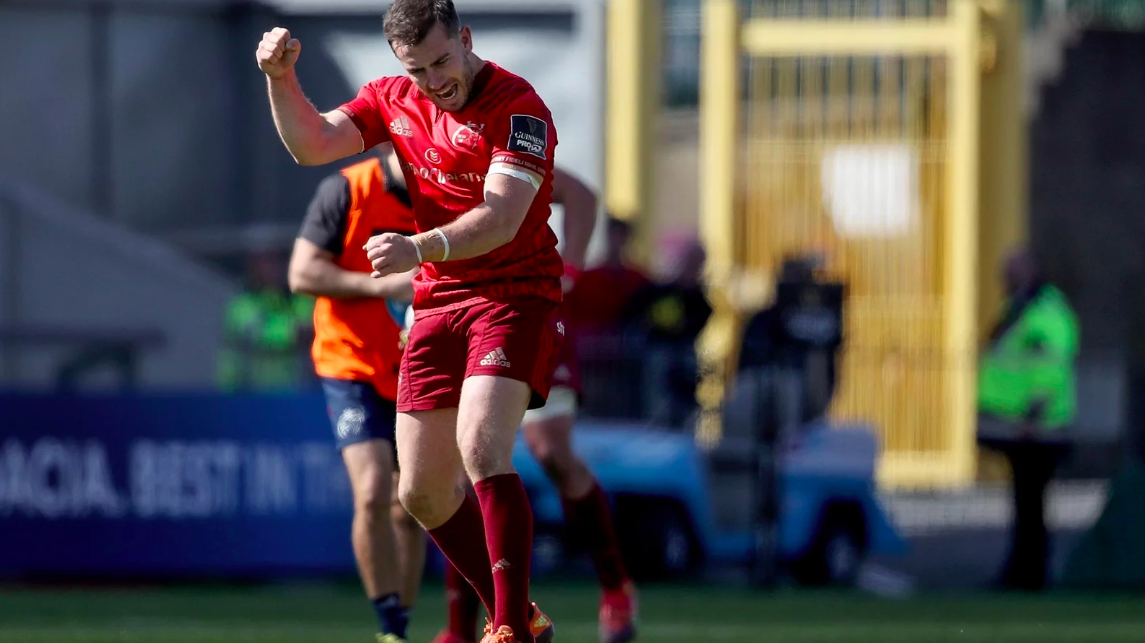 I suppose when it comes to analysing this game, you’re either praising Benetton or downing them.

It’s true that Munster underperformed – and we did – it can also be true that Benetton played an outstanding, pressure-free game that pushed Munster right to the edge in this tense PRO14 quarter-final. The two are not mutually exclusive.

Let’s be clear, Munster were far from their best here, and I’ll be examing that during the next two weeks on TRK Premium and in brief here, but serious praise has to go to Benetton. They played a game that was true to their style, ignored the usual knock out rugby formula – for good or ill – and lived right on the edge of legality with some of their defending, where they needed to be, and almost pulled off the biggest result in their recent history as a result.

Munster, on the other hand, will be concerned with some of our attacking decisions at key points. A lot of focus has come on Munster’s attack over the last few weeks – some of it fair, some of it a tad OTT – but the biggest issue for me has been the individual options taken when we create opportunities. We are creating opportunities, despite what you might have been told, but whether it’s individuals fluffing their lines – stepping left instead of right, passing when they should carry or carrying when they should pass – it lets down the structure that created the chance.

Everything is perfect, right until Haley’s line after the pass blocks Sweetnam and forces him to step off the try scoring line and give Tavuyara a way back into the game to stop the ball on the line. It’s not anyone’s fault necessarily. I mean, what’s Haley supposed to do? Evaporate? But it adds up to a chance for five points missed out because a guy was somewhere it would have been better for him not to be. 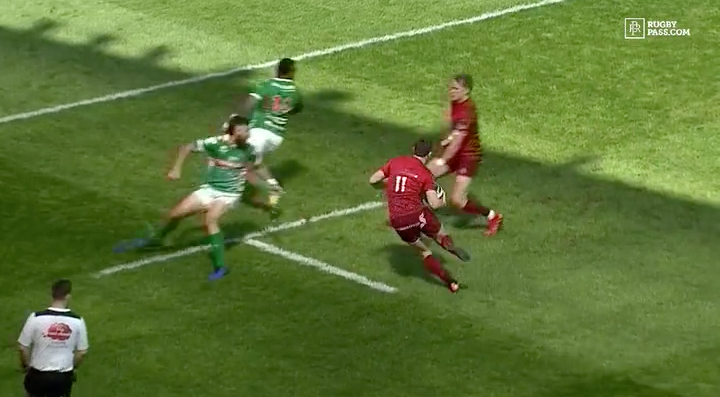 It’s bad luck in this instance but when bad luck starts adding up, it behoves you to start checking to see if you’re tangling your own shoelaces. 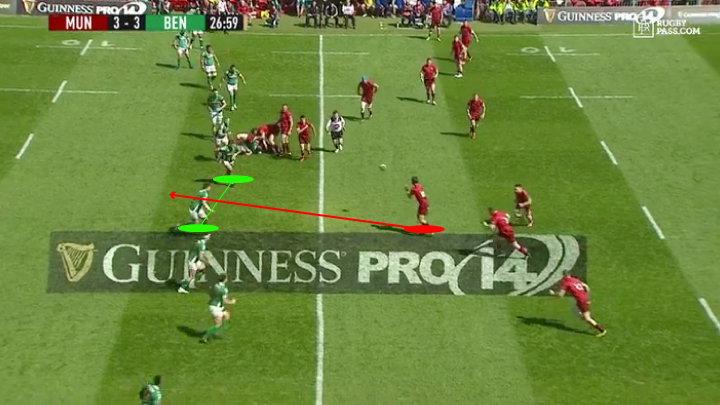 Bleyendaal spots a slow-down from Benetton from the previous ruck. A tight five defender blowing hard to cover space at “B” alongside a slightly isolated “C” defender is a prime Benetton weakness so Bleyendaal decides to attack the inside shoulder from first receiver. Watch what happens;

Bleyendaal goes for the across the body offload to the space left behind by the “C” defender stepping inside – the perfect option in this scenario – but who’s running the support line? Stephen Archer.

Bleyendaal decides not to hit Archer with the offload because of how isolated they both are. Archer wouldn’t have the gas to make a significant linebreak from here and he was in real danger of getting turned over when he was tackled. In fact, we were lucky not to give away a penalty for a side entry at the breakdown.

Tyler’s idea was good but without proper support – say, from Conway – then it became a bad idea. How do we fix that? Could we move Conway a few steps closer to Bleyendaal so he’s still a live second layer option but that he’s also capable of improvising as a “flash” opportunity presents itself? 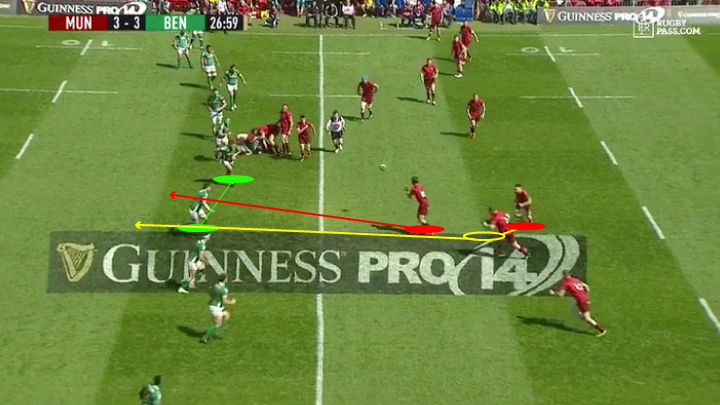 Can we make our own luck here by just amending a small thing? The margins aren’t huge, don’t forget. We created this chance, after all, but the right piece wasn’t there to complete the puzzle.

After an excellent maul, Munster engineered an excellent opportunity on the edge of the Benetton defensive line for Darren Sweetnam attacking on Bleyendaal’s outside shoulder.

Once Farrell blocks out the Benetton inside cover, Munster have a 4 on 3 isolation on the edge.

Now – you might think, how is this a 4 on 3 isolation? There are two men outside Sweetnam and Sweetnam has the ball so it’s a 3 on 2, right? No – Bleyendaal is still alive on this phase, as is the man opposite him. 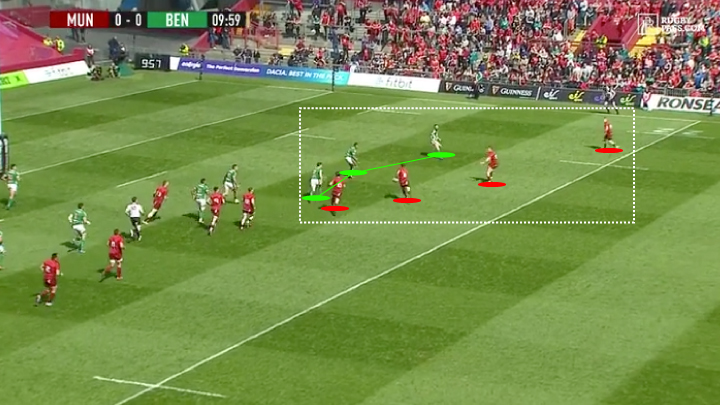 So how do we execute this? We’ve got a good player in the Key Moment in Sweetnam, as he can pass, kick and carry with pace but can we get a good decision? 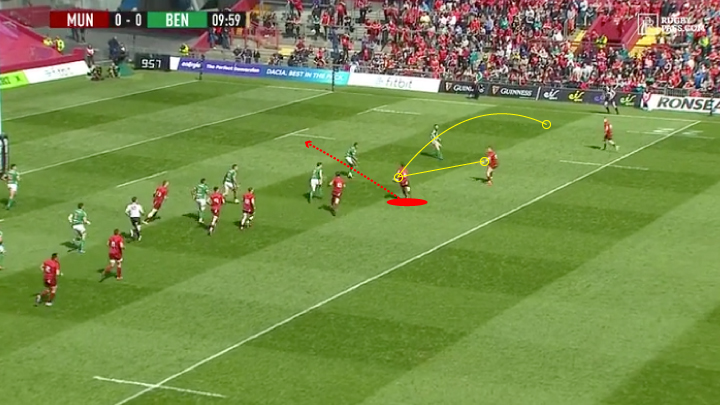 The immediate options are a carry at Tavuyara’s inside shoulder with a possible post-contact offload to Bleyendaal or Haley as our ideal option but they can clear him out if necessary. He can pass to Haley – both the ball and the decision – and stay alive for a support action himself. Or he can throw a wide pass to Conway. This is the most difficult option but, if done exactly right, will lead to a spectacular finish in the corner.

If you have a stock idea of “good attack” in your head, you might think that last option – the big pass to Conway – was the correct one but I wouldn’t agree. Let’s play it out;

It’s not even a bad pass. The farther the ball has to travel, more time Hayward, Morisi and Tavuyara have to get across and stuff Conway’s finish. We almost scored on the recycle but that isn’t my point – my point is that we went for a big skill execution rather than a simple play. Forcing it a small bit, in my opinion.

I’d have liked Sweetnam to maybe have a bigger cut off this one himself. Attack Tavuyara. 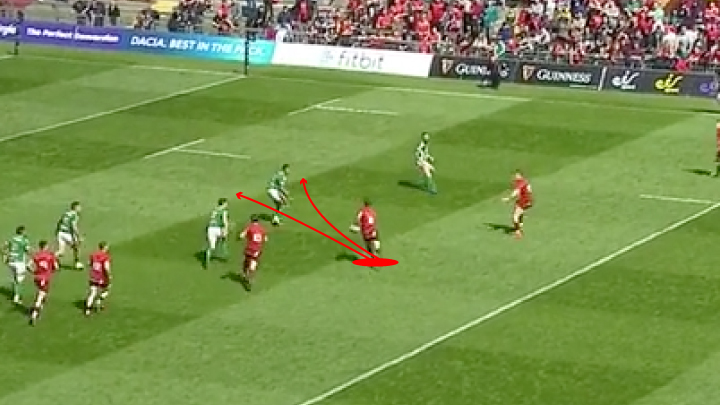 He’s got his shoulders turned out to the touchline so attack his inside shoulder at an angle – make him square up while Morisi swarms. Maybe then pass to Haley. It’s not about “we did X so we should do Y instead and win every game” it’s just that it’s a recurring pattern as the season has developed. We’ve zigged instead of zagged and it’s not because we’ve got poor players or that we’re poorly coached, it’s just we’re not making the easy decisions, in my opinion.

Which would all have been fine if we didn’t start compounding errors ourselves.

We were defending quite well and Benetton weren’t having an easy time of trying to crack our defence, even if they were innovating some nice chipped box kicks – something I think we’ll see other teams copying.

Our lineout messed up a few times, which will annoy us but we were creating opportunities and even at 3-3 I think we would have slowly stretched out our lead but we conceded a try late on in the first half that will wreck heads. We started handing out kick transitions to one of the best kick transition teams in the PRO14.

This is a very average kick return from Haley.

It essentially gave Allan a soft opportunity to pick out a kick from centre-field with plenty of time to make a decision and execute. He pinned us right back into our 22 and put big pressure on our exit.

(As an aside, Haley did the exact same thing in the second half and it should have lead to a Benetton try in transition.)

When we took the ball off the lineout, set up a long ruck and then fired it back to Bleyendaal, who kicked from around the 5m line.

A few weeks back, Munster conceded a try in kick transition directly after a “long ruck” build – I spoke about this at length in the Red Eye this week. The same happened here, just indirectly. By drawing a cluster of players into a long ruck, we essentially created a target for Benetton to hit if we didn’t make a good exit. When Benetton went quickly off the lineout, Hayward had a target to aim for.

The same cluster of tight five forwards involved with the long ruck had moved up to the primary defensive line and could be attacked by Hayward in transition. 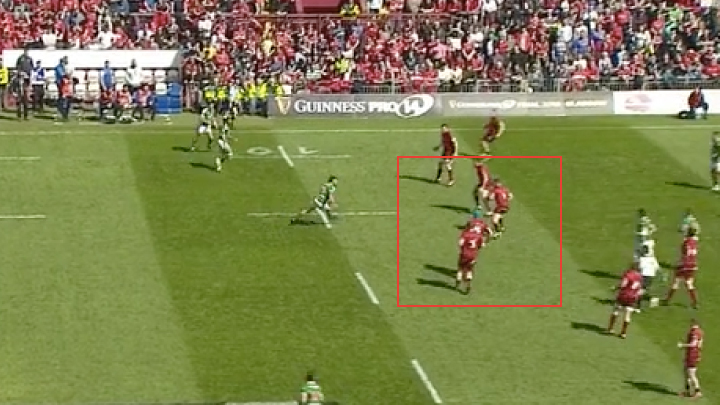 He offloaded to Steyn, who created a dominant field position that Benetton executed perfectly to take 10-3 lead into the break. We’d do the same thing in the second half and almost concede another try in transition off a long maul box kick.

That aside, going in behind changed our approach a small bit in the second half.

A nice tip on from Scannell to Stander and then an excellent carry gives us separation from Benetton’s defence, quick ball and even an average pass to Bleyendaal doesn’t hinder a good kick down the line.

We were able to pressure the Benetton lineout and, a phase or two later, we had a penalty. 10-6.

After conceding a penalty ourselves, some varied phase play and quick ball lead to a rash challenge from Benetton and a penalty in front of the posts. 13-9.

After a good lineout maul and a learned lesson from the first half, we got Botha in around the corner to set up a dominant field position that Benetton couldn’t help but slow down illegally once we reached the 5m line.

JJ and Conway make better decisions here – nothing flashy – but it sets up the reverse option on Benetton’s tight five forwards on the next phase, something I spoke about in the Red Eye this past week and a few weeks ago.

From there, Benetton still could have won but two key moments gave Munster an opportunity to steal the win.

I go through the technical details here but, without clicking through, I think it was a good steal.

Then, a few minutes later, CJ Stander won a penalty on our 10m line. It was controversial – and we were a little lucky to get it – but dissent from Benetton moved the ball forward ten metres and gave Hanrahan a chance to make himself a hero.

He did just that.

From there, Munster saw out the win and pressured Benetton into two snatched drop goal attempts before the final whistle blew.

It was over, Munster won, but in some ways, it felt like something less than that. We weren’t good here – we weren’t awful either – but we’ll need to be way more clinical in two weeks in the RDS. We just need better decisions at key times. Our skill levels have improved and we have good schemes but we need to get our top guys back on the field – Carbery and Earls – and start taking better options when they present themselves.

The way we dug out this result will stand to us, you’d hope, but we’ll need much better in the RDS.