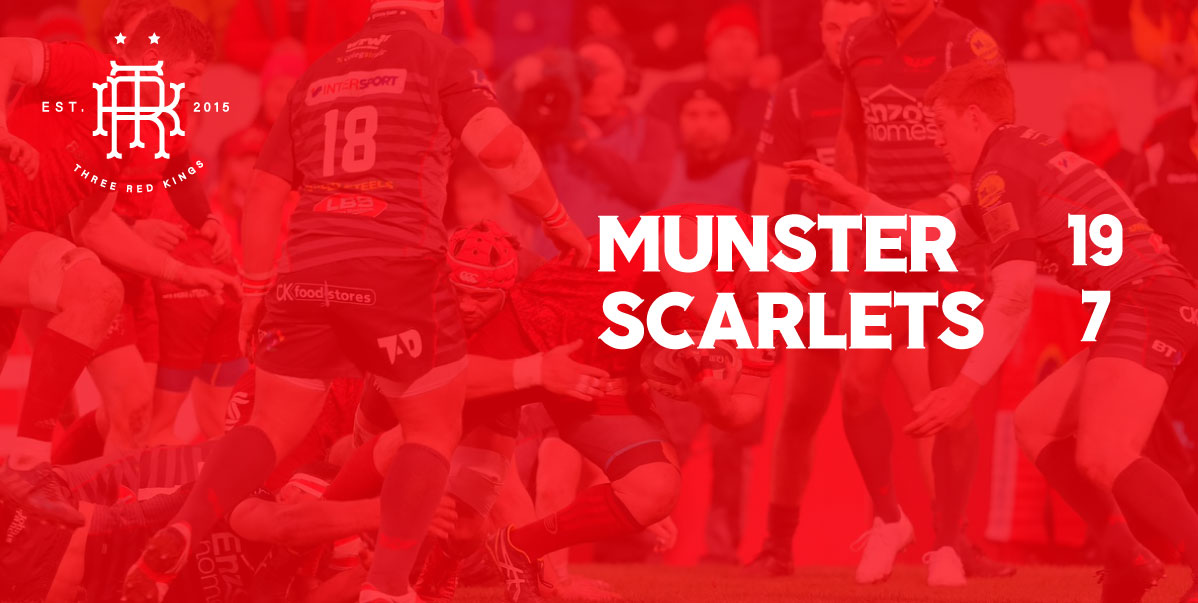 Those were the words of Robin Copeland in the wake of – another – test window Guinness PRO14 Man of the Match award and they certainly rang true. Last week, Munster were inaccurate, off tempo and lacked the ability to secure their own ball in possession. This week was a different story. If one stat illustrates the difference in performance from last week to this week, I think it’s this one; against Edinburgh, Munster had 62 rucks and won only 54 of them. Eight lost rucks might not seem like a big deal, but those eight lost rucks represent Munster losing possession and attacking momentum through a combination of our own profligacy and the breakdown prowess of Edinburgh. That’s just not Munster. Something had to change, and change it did.

Against Scarlets, Munster had 88 rucks and won all 88 of them.

To achieve 100% ruck retention against the best breakdown side in the league is good going, especially compared to that 87% from the week before. That 13% differential in possession retention can often the difference between a W and an L in this game, and it played a large part in the result here. What the number doesn’t show is the grit, attitude and technical prowess that pushed this excellent result.

We played right at the edge of what Mitrea would allow at times, and that’s what you need to do against a side as streetwise and technically proficient as the Scarlets.

It’s all the more pleasing given how unlikely this result looked inside the first 15 minutes of this game. The Scarlets opened this game with the kind of tempo, width and multi-layered running threat that has become their trademark and for a while, Munster couldn’t really live with it. Scarlets had the opening try in the 6th minute and you’d have got long odds on that score being their last, such was the effectiveness of their attack in the opening exchanges. Munster didn’t really help their cause with some careless, nervous kicking that too often allowed Scarlets to continue their tempo rather than slowing the game down. The Scarlets looked irresistible, you felt, but as the seconds ticked on into minutes, the Munster machine began to grind away at the PRO12 champions.

It might not have been as pretty as the Scarlets’ attack but from a time spent in the opponent’s 22 perspective, it was efficient. Munster managed to convert set-piece pressure into points through the lineout maul and then, impressively and ominously, through the scrum.

In the aftermath of that score, Munster began to get a grip on the Scarlets attack. Whereas before, Scarlets were able to narrow our defence and draw out our blitz with their second layer attack…

… an on-field adjustment from Munster saw us get to grips with Scarlets attacking overload by managing our openside numbers better and, crucially, slowing down the speed of Scarlets recycle, especially off the lineout.

That allowed Munster to track Scarlets’ wide patterns and allow our forwards to start imposing themselves on Scarlets’ heavy carriers. The champions attacked with a lot of width off the lineout in particular, but we slowly got to grips with it to the point that they didn’t score outside the 6th minute.

A lot of their early field position came from some loose Munster kicking but that gradually tightened up as the game wore on. We kicked, Scarlets ran it back or attacked with massive width off the resulting lineout and we struggled to get the value from our kicking that we could have. Munster probably won’t be able to afford that kind of kicking against Toulon but the way they adjusted what they were doing on the field and again at halftime bodes well for a lot of reasons.

The first half played out a lot like the classic “free running offload dream team” against “set piece beasts” cliche. Scarlets made ground in the wide channels, Munster made ground through scrum penalties converted to maul penalties, converted to scrum pressure and then points.

The key for Munster was getting that initial bite into Scarlets. That didn’t really happen in the first half but played a large part in a mostly dominant second-half performance that deserved a little more points on the board than showed on the scoreboard.

The James Cronin try that was chalked off by the officials will be a huge talking point, and it’s quite fortunate that it didn’t become a game-deciding or, indeed, season-defining decision. There’ll be enough said about that without adding to it here but it certainly threatened to overshadow a game that Munster had slowly come to dominate as the second half progressed. Let’s just agree that it’s a difficult job, under quite a bit of pressure and leave it at that.

Munster eventually added daylight to the scoreboard in the 78th minute, which was far from underserved based on the way Munster dominated in the set piece and in possession in the second half.

We worked out the Scarlets puzzle, defended pretty well and began to impose our attacking pattern onto the champions. That’s no easy feat. The Scarlets came up short here but it’s fairly clear that they’re a savage team that’ll get better as their test guys integrate back into the specific demands that Pivac makes of them.

This was a good performance from Munster that showed the kind of improvement week to week that you’d want from a side with our ambitions. We started slowly in both halves but worked out what we had to do on the pitch and gradually took control of the major moments, the scoreboard and then the game.

This was a decent outing for these lads.

I thought James Hart and Ian Keatley started poorly enough but grew into the game as it developed. Some of their early kicking was a little loose but they slowly got to grips with the tempo and accuracy that would be needed to exert pressure on the Scarlets. Hart took his try very well and made some excellent decisions as the game developed.

I thought Rory Scannell had a decent enough game here before being forced off. He was caught a little on Scarlets try but worked hard to get back into the game thereafter, especially in defence.

I thought Gerbrandt Grobler had good energy when he came on. He got caught on one carry but I thought his work in maul defence was good.

Jack Stafford had a small amount of time on the pitch but I really liked what I saw from him. He showed sharp passing, a break to the gain line and some good decision making.

JJ Hanrahan hasn’t had a vintage season by any means and this was far from a vintage performance but there a lot here to like. Some of his positional work in the backfield looked a little off – as you’d expect for a guy who doesn’t regularly play at 15 – but he was another guy who grew in influence as the game ticked on.

He showed up at first receiver with the kind of pace, electric step and energy that was his trademark in his first spell at Munster.

This was a win built on forward domination.

Once Munster managed to get our forwards in a position to win collisions, dominate at the set-piece and impose themselves one on one in defence, the pressure began to tell.

Billy Holland and Jean Kleyn were really good. Kleyn was a real powerhouse on both sides of the ball and added a lot of grunt to the tighthead side of the scrum. Holland just did what he does in most games – kept everything flowing with hard, accurate rucking and clever lineout calling.

Tommy O’Donnell had a superb game until he was forced off with an injury. He carried really well, showed great energy off the ball and played a big part in helping Munster turn the tide of the game back after the opening 20 minutes. Hopefully, his injury isn’t too serious because this performance showed exactly what O’Donnell can offer.

Dave O’Callaghan had a really good cameo off the bench for O’Donnell. He carried with directness, kept up the defensive pressure with his tackling and showed some good handling in the build-up to James Cronin’s ghost-try.

Robin Copeland had another good outing and showed Connacht what they can expect next season. He was endlessly physical on either side of the ball and showed excellent pace and power off the base of the scrum in particular.

The biggest issue with Copeland seems to be consistency – both in performance and in the opportunities he’s had. When he plays like he has done for the last few weeks, he looks like an international player.  Good stuff.

Jack O’Donoghue had another impressive game at 6. He’s really building on what he’s good at – lineout jumping, pacey carrying in the wider channels and a developing, aggressive rucking game. He showed up well against a guy who’s got a lot of the same qualities in Aaron Shingler and looked more than up to the pace, both figuratively and literally.

Sam Arnold is some man for handing out punishment. He’s not the tallest outside centre you’ve ever seen but he’s an example that height isn’t everything. What a powerful tackler and runner this kid is.

He’s a hitter in defence, a powerful carrier and has a superb break. He’ll be up against it when Bastareud comes to town, but Sam Arnold doesn’t have an inch of fear in him. He was really good here.

I thought Dan Goggin had a good cameo off the bench, with some strong carrying and tackling. Stephen Fitzgerald looked really calm in possession and positioned himself well throughout his time on the pitch. His pass for Wootton’s try showed a lot of balls and technique to execute in the circumstances.

Calvin Nash looked like a guy who’s got all the time in the world. He looked sharp in possession, aggressive and pacey in defence and looks to have a lot of gears to go through at this level and beyond. A name to watch, and then some.

Alex Wootton looked like a guy who was proving a point tonight. He had one try chalked off but wouldn’t be kept out in the form he’s showed this season to date. He’s deceptively big, really strong in possession and has a power step that’s getting better with every outing. He’s Munster’s top ball carrier, top metre maker, top defender beater, top offloader and, of course, top try scorer. He showed all of those qualities in this one. Has to be considered a serious Champions Cup option and, as a consequence, someone who has to be on the Irish radar.

I’ll be covering this game in detail on TRK Premium, which you can subscribe to for just €2 a month.

I’ll have a detailed look at Munster’s breakdown work in this game, our attacking patterns and building towards Toulon.