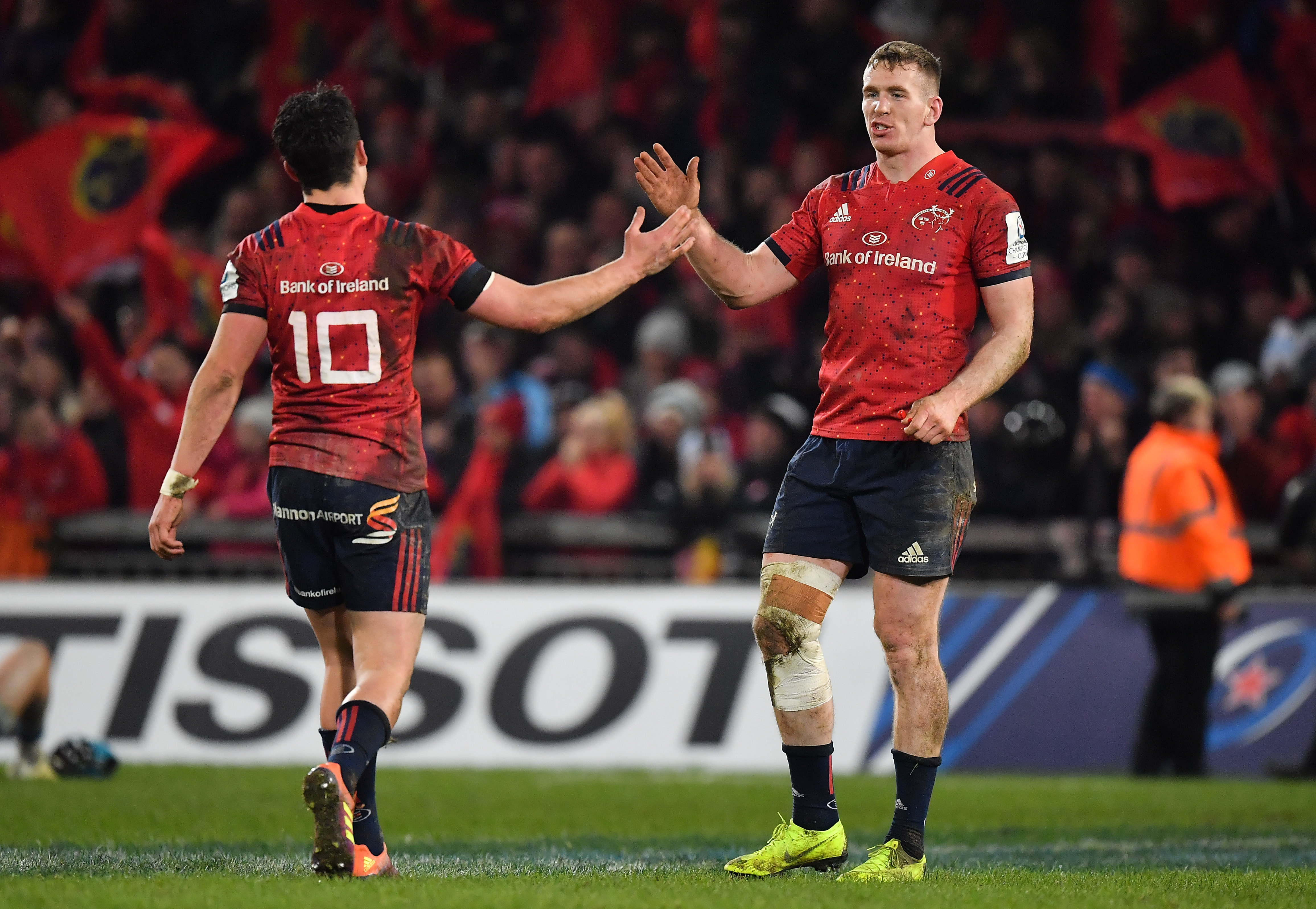 Limerick , Ireland - 19 January 2019; Joey Carbery, left, and Chris Farrell of Munster celebrate at the final whistle of the Heineken Champions Cup Pool 2 Round 6 match between Munster and Exeter Chiefs at Thomond Park in Limerick. (Photo By Brendan Moran/Sportsfile via Getty Images)

That was just the crowd in attendance. God only knows what the players are feeling like. Munster’s 9-7 win over Exeter was one of the most physical games I’ve ever seen in Thomond Park. This was a brawl played out between two hard sides.  It was hand to hand combat. It was trench warfare. It was a sledgehammer fight in a phone booth. It was classic European rugby played out in one of its most famous arenas.

And yet, it was a decidedly strange game to go with all of that.

The most impactful moment on the course of this game was Exeter’s mauled try in the 12th minute. That gave the Chiefs a 4 point lead that they, as a unit, are designed to see out. I spoke pre-game about Exeter’s style of play being focussed around ball retention and once Exeter had the lead – any kind of lead – they would be incredibly difficult to pull back. The Chiefs were dominating the ball for minutes at a time and racking up multiple phases. Munster weren’t being overly stressed by Exeter’s patterns but the longer Exeter had the ball, the harder it would be for Munster to break them down. Beirne and O’Mahony did their part with crucial breakdown turnovers but Munster struggled to get the ball back in their hands for long stretches. In some ways, it looked a little like Exeter were trying to run the clock. White took an age on every box kick, Exeter’s forwards carried the ball in tight clusters that prioritised retention over gain line and their backs seemed content to traverse over and back across the field for minimal gains. They kicked smartly from hand but never really looked like scoring from their phase play.

That, in a lot of ways, was the story of the game.

Exeter with the ball, Munster repelling them. Wash, rinse, repeat. Despite their domination of the ball, Exeter never really looked like troubling Munster’s centre-field defence. The likes of Armand, Hill, Dennis, Skinner and Hepburn racked up a tonne of carries up the middle of the pitch but when you look at their collective work – 77 carries collective carries for just 81m gained – you can get a picture of how this game went. Exeter had 64% possession and 65% territory but they never looked to threaten Munster’s defensive integrity when they weren’t mauling from close range.

This phase was a good example of what Exeter did well. Munster stopped them at close range and kept their possession to the rough vicinity of the halfway line but White’s kicking (along with Simmonds) really added value to their phase play.

Exeter’s game seemed to be focused entirely on racking up the phases and waiting for an infringement that they could attack down the line with. Exeter had enough penalty opportunity to have kicked this game away from Munster but every time, they went down the line. It worked for them once, but then never again and it cost them the game.

Munster made no such mistake.

You could say that Exeter were going for a bonus point with their tactical choices on penalties but that wasn’t just something they picked off the rack for this game – they often play the same way in the Premiership. That’s the Chief’s game in a nutshell. Play to earn penalties, kick down the line, maul, score. Then do the same again. It works for them a lot but not here. Munster’s lineout defence was too good. Our indiscipline gave them opportunities but Munster’s attacking of the front and middle of the lineout forced the Chiefs into longer and more complex throws that lead to crooked throws and spilt ball.

O’Mahony’s hang time here, coupled with the time that Yeandle was stood on the line waiting for Exeter to get through their three-feint scheme, put Exeter’s throw under pressure. Munster marked and tracked Exeter’s primary jumpers and the efforts that Exeter went to shake off Munster’s attention often played into Munster’s hands in the part of the game where the Chiefs are most dangerous.

The Chiefs started to go higher and longer to avoid Munster’s pressure to poorer and poorer results.

That would be especially true as the game drew to a close.

Munster lost Beirne to an ankle injury in the 66th and in came Billy Holland to defend a 5m lineout drive. This was where the Chiefs were supremely dangerous and a try at this point would have been the game for the Chiefs. Holland, with his boots still spotless after coming off the bench, made one of the most crucial lineout steals ever made in Thomond Park.

It was a colossal moment in Munster’s season. Munster knew that if Exeter took the ball down here, they’d be odds on to score. An 8 point lead in this game would be close to game over with 12 minutes left. Munster threw up a counter-launch in the middle, through O’Mahony, and at the tail through Holland.

Holland’s job was to avoid being feinted out by Armand and allow Stander to guide his counter jump. He plucked Exeter’s throw clean out of the cold night air.

Munster would go up the field a few minutes later and earn the penalty position that the faultless Joey Carbery would nervelessly dispatch before seeing out the game from another 20+ sequence of phases from Exeter.

The narrow margin of victory was a reflection of the tightness of the game. Munster struggled to build phases together through a combination of Exeter’s defensive pressure and some poor handling.

That made it difficult to maximise our opportunities when Exeter didn’t have the ball – which was most of the time. Attacking wise, Munster weren’t at their sharpest or best by a long way but it was a game that seemed to draw itself into the claustrophobic spectacle we saw here.

Exeter are one of the best teams that I’ve seen in Thomond Park for a few years and they played up to that billing. They were tough, they were hard and they were close to getting a result that would have been huge for them regardless of their qualification status in the pool. They’ll have learned an awful lot from this game, but Munster will have too. This was a premier defensive performance against a side that ask one very physical question of you – can you stop us in the first channel? Munster answered that question emphatically. Munster finished the pool stage with the least amount of points conceded out of any of the other sides and all of that defensive solidity was on show here. That resilience is something to build on as we break for the Six Nations in the knowledge that a trip to Murrayfield awaits in the Spring.

Joey Carbery got four stars because he didn’t really have a massive impact around the field but his goal kicking won the game for Munster. He can’t seem to miss off the tee since the Castres game. 20 kicks, 20 pairs of flags being raised. That’s elite stuff and it’s the kind of thing that wins you games at the elite level.

CJ Stander had the kind of game that reminds you how good a player he’s become. This was a game played at test match intensity and test match physicality so up stepped Stander as the test match animal that he is. He made 25 tackles and carried into the hardest, strongest manned areas of the pitch. Teak-tough and getting better. He’s just very, very good ★★★★★

Tadhg Beirne had another standout game right when it was needed most. His ability to steal breakdown ball again and again even though every side in Europe knows he’s going to try and do it.

His ankle injury was a dampener – hopefully it’s nothing too serious – but Beirne showed once again that he’s one of the premier forwards playing the game in 2019. An absolute game changer ★★★★★

Billy Holland was only on the field for 14 minutes but he made two absolutely crucial interventions that helped turn the game for Munster. The first was his lineout steal, which kept Munster in the game when we were badly under the pump. The second was this tackle that forced a knock on as Exeter pressed for field position that might give them a chance to win the game.

Billy Holland is one of the most underrated forwards in the country and he showed in his cameo here that his intelligence, durability and grit are second to none. He’s long been a crucial part of this Munster squad and he was a crucial part of Munster’s win here. Superb, game-changing impact. ★★★★★