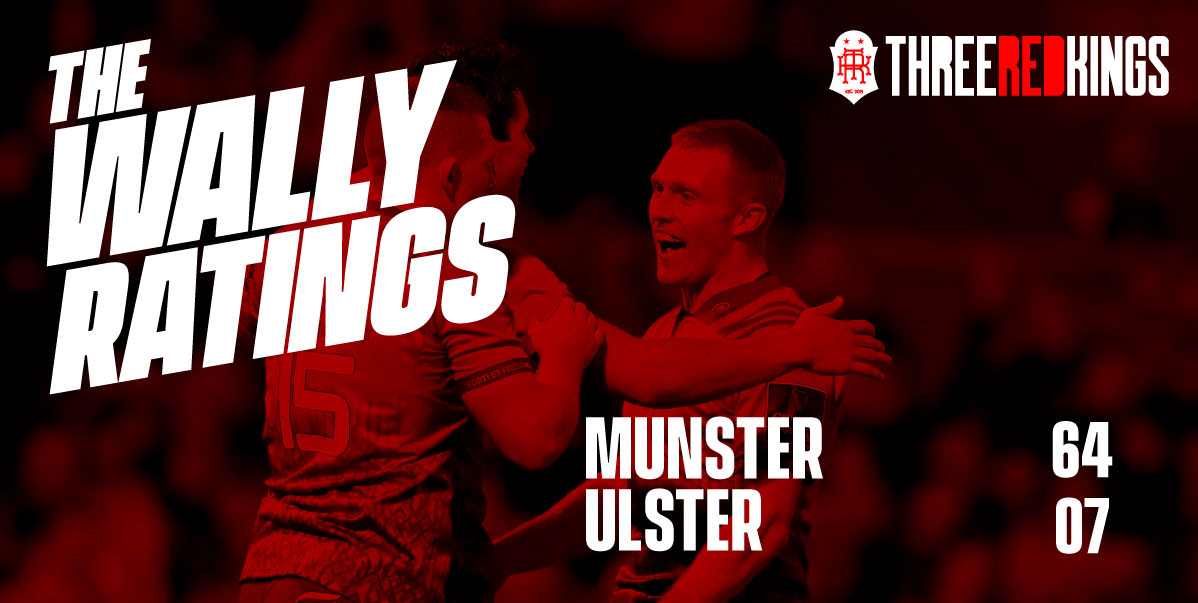 What happens when you win so comprehensively the match almost defies rational explanation?

Munster were 29-0 up at halftime, with the bonus point in the bag on 37 minutes and the contest long completely by the 30th minute when Tommy O’Donnell barged over off the back of a powerful Munster maul. You could say that any chance that Ulster had in this contest ended when both Iain Henderson and John Cooney had to leave the field in the first half but their presence might have shaved a few points off what ended up being a record Munster win and a record Ulster loss.

Ulster will be sore after this battering – not the first or the last to happen on the Cratloe Road – but the nature of their second-half capitulation will be a concern for their new head coach. They have a number of outs, of course. They have a roster of injured players and two international stars in Rory Best and Jacob Stockdale who weren’t quite ready for this contest. They’re also after a two week trip to South Africa which, as Johann Van Graan pointed out afterwards, just takes the legs from you on the week back. Munster had a Champions Cup semi-final the week after our two week trip to South Africa and got bombed out it inside 30 minutes. The same happened here to Ulster, more or less.

That won’t be a salve for Ulster fans in the aftermath, just like it wasn’t for Munster fans last April, but it will go some way to explaining this record loss. Sure, their second layer has a lot of holes in it but they aren’t as bad as 64-7 might suggest.

The first of Munster’s tries was scored more or less on the stroke of the fifth minute after a lovely bit of handling by Andrew Conway on a ricocheted kick through and then more excellent running and handling by Alex Wootton. The ultra impressive Dan Goggin provided the finish.

Most weeks, these kick-throughs ricochet into touch or, even worse, bounce back behind the attacking line for a potential transition but this time, Conway’s hands were quick enough to take advantage; both in catching the ball and then having the awareness to take it to the line and dump it off to Wootton for the linebreak.

Eddie O’Sullivan – on mic and coat stand duty with Eir Sports – was at a bit of a loss to explain the nature of this try and Tommy O’Donnell’s first try a few minutes later. He even went so far as to splutter that Munster should, for some reason, be concerned with the manner in which they had scored their tries. 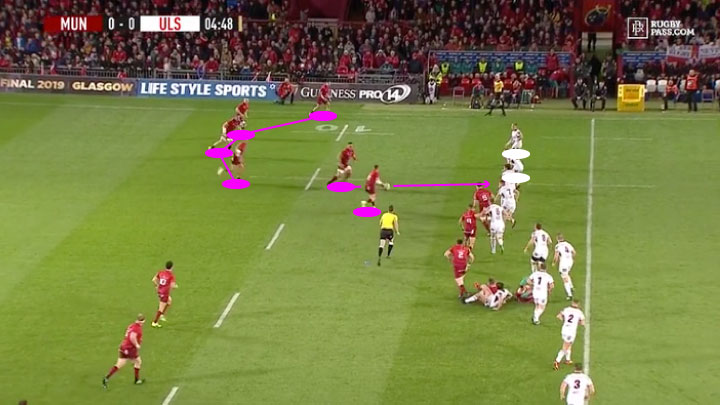 Munster had worked a massive overload on the short side with Stander acting as a brake on the Ulster drift. When Goggin initially looked to kick through here, it was to set Wootton and Conway off down the angle onto an exposed Nelson with the Ulster edge defence turning late from a standing start. Munster got lucky with the ricochet but the position they were in was no accident, and neither was the skillset on show from both Conway, Wootton and Goggin.

When you look at Tommy O’Donnell’s first, the main thing that sticks out is Darren Cave falling off a tackle.

O’Donnell’s finish was excellent from the Ulster 10m line but what else can we see outside of Cave’s terrible tackle?

Munster were loaded up in the tramlines on a short side play once again with Ulster drifting and numbers down in the 5m channel. 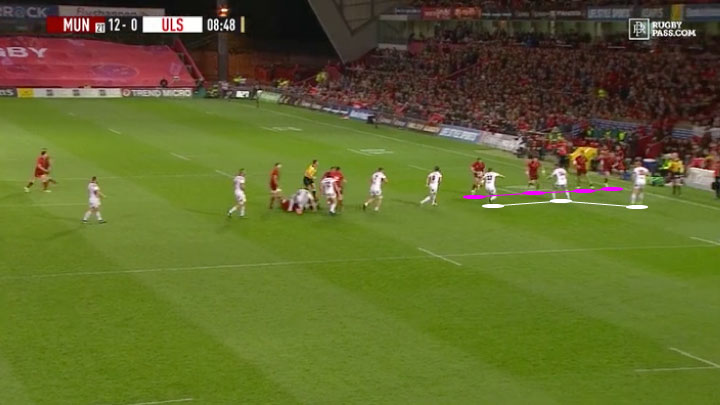 Cave’s missed tackle was the most glaring aspect of the moment, yes, but Munster were in a position to attack effectively even without that defensive error. In the build-up to this moment, Munster worked in the transition from an Ulster kick return and then, as they reset from an excellent Carbery crosskick to Goggin.

Munster put themselves into position to make any defensive errors for Ulster extremely high-stake.

All in all, not much to be concerned with. Maybe Eddie was watching something else.

Elsewhere, Munster were attacking Ulster’s tendency to load up defensively on big openside plays. I spoke about this in The Red Eye pre-game, and Munster went after that tendency like above but also by using Scannell and Carbery as interchangeable pivots to structure plays beyond Ulster’s blitz with assists from Munster’s playmaking heavy forwards.

Once we found those runners, we usually found a linebreak and then, invariably, a try.

This was not a game where Munster dominated the stats sheet. In fact, if you look at the breakdown of possession, territory, ball carries and passes, Ulster lead in all of them. They had 56% possession over the entire game and 61% possession in the second half, where they conceded five tries. Munster had to make more tackles and defend more rucks but our work in transition was the best it’s been all season.

A lot of that came down to decision making from halfback, which was excellent all game long. Alby Mathewson had a superb start to his Munster career with an assured, authoritive performance that always put Munster where we needed to be.

That was especially evident in our red zone conversions. Against Cardiff, we coughed up three try-scoring opportunities through the inefficient use of possession in the Cardiff red zone. Munster’s work once we got to the Ulster red zone in this game was much better and a lot of that comes down to Mathewson.

He had good field position – wide initial ruck – to work with, compared to some of our efforts against Glasgow and Cardiff but his decisiveness of when to use Carbery and when to bind a few more Ulster defenders in was very good.

In the second half, Munster’s fifth try came from excellent planning by Mathewson.

O’Mahony was free on the far touchline while Munster had possession on the other. The ball needed to get across but you can’t go too quickly or Ulster will crowd you out – the one advantage of defending on the 5m line.

Mathewson spotted the player in space and then began to work out how to get there.

You see him spot the player and then begin to dictate the structure. After he uses another ruck, you can see him looking for the space before he the ball recycles so there’s no wasted time on the ball.

Now he can go and find Carbery and basically give him the task of making something happen and, well, that’s what Joey Carbery has been doing as of late.

Equation solved. It looks easy when it’s done with this efficiency.

That word, efficiency, is the word I’d use to describe this Munster performance. There was no let-up, no foot off the pedal, no 10 minutes off – just relentless transition attacks that punished Ulster over and over.

Yet we don’t know exactly where Munster are right now.

Munster aren’t as bad as Cardiff and Glasgow would suggest but we’re not as good as the three five-pointers and 151-20 points difference at home would imply either. We’re somewhere in between right now and only the proving ground of the Aviva and Sandy Park will show where on that scale we fall at this stage in the season.

A response was needed here though, and it was emphatically provided.

Look, everyone played well here. Joey Carbery, I’ll be covering during the week with a look back at all four performances up until now but he was really good here. Alby Mathewson has a great 50 minutes and would have got five stars had he been on for a bit longer. I thought Duncan Williams and Ian Keatley were excellent when they came on. Billy Holland and Niall Scannell brought a lot of stability to both the scrum and lineout and Tommy O’Donnell and CJ Stander had standout physical performances.

Dan Goggin is not a guy who a lot of people seem to talk about when it comes to high potential Irish midfielders but more performances like this are sure to change that. He was OUTSTANDING. He finished off two tries but had a crucial hand in others with his work under the high ball, his pace on the outside, and his passing, which was excellent throughout.

This was a physically impressive showing from Goggin on both sides of the ball and as a decoy runner with great animation. A second watch really highlighted how good he was.

Whether it was helping Tommy O’Donnell drive over the line off a maul, or attacking the Ulster throw, or mangling the Ulster breakdown or piling into tackles in defence, this was a standout game for Peter O’Mahony.

Top players play on the edge, and that’s where O’Mahony seems to have built a house with a lovely rock garden and swimming pool. His work over Ulster’s breakdown was a constant menace, sometimes illegal, but always effective. When O’Mahony plays like this, he is as talismanic as any player who has ever been Munster captain and Ulster just couldn’t live with him. We needed a test match animal to respond to last week and there are few big game beasts that can rival Peter O’Mahony in that regard.