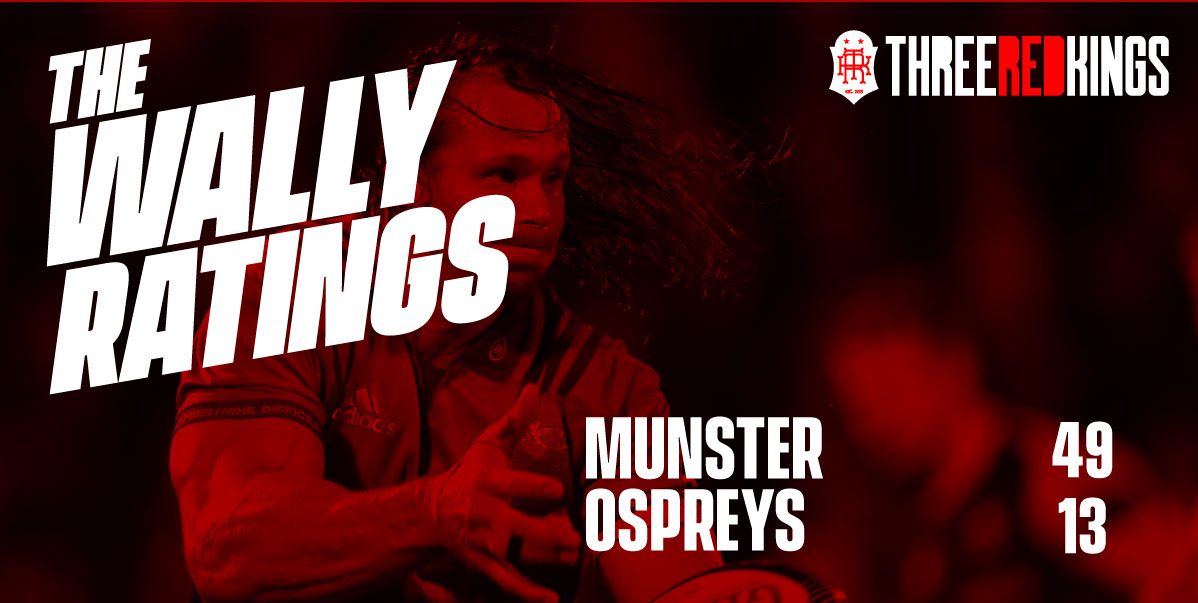 This is the kind of game that you were boned no matter what you did.

Well, in the scenario out to Munster with Allen Clarke’s selection I thought we did quite well to get the expected bonus point win with as little fuss as possible while showcasing the potential of our first team squad.

A game like this can often be a quagmire, with the favoured team only pulling away into bonus point territory in the last quarter so it was a pleasure to see Munster avoid this route to victory. Munster would have known that they were expected to blow this version of the Ospreys away and managing to do that inside the first 40 minutes can’t really be sniffed at.

There’s an element of that old Chris Rock bit about writing that sentence.

But it’s pleasing to get the win regardless of how expected it was, and in as comfortable fashion as it transpired with a good few impressive individual showcases.

So how did we do it?

Against Glasgow, Munster struggled at the set-piece – both scrum and lineout – and at the breakdown, which limited our ability to build pressure on the opposition. Instead, with a dominant scrum and lineout, they dominated us in territory, possession and then on the scoreboard.

This game was almost a carbon copy but in reverse.

The opening 10/15 minutes showcased Munster’s attitude to the breakdown and contact area in defence. Beirne, O’Mahony and Chris Cloete, in particular, were going after the Ospreys’ breakdown on every other ruck.

That allowed us to play the kind of close-range breakdown turnover transition game that I think Munster will really be going after this season.

When we got these turnovers, we had the close range hands and intention to get the ball to where the disrupted space was.

Let’s take that previous turnover from Cloete as an example but watch what happens after;

We got the ball to Carbery, who fed Beirne who beat Cracknell with a step before feeding O’Mahony, recycling quickly and then almost getting Cloete – the original jackal – away down the tramlines with Sweetnam, Williams and Carbery flowing in behind him.

That was hugely encouraging in its own right, mainly because this is the kind of ball we’ve been spoiling to play since the turn of the year.

For all that, the initial breakthrough didn’t come through the rapier work of breakdown transition but through the bludgeon of the lineout maul.

Look at Stephen Archer collapsing the Ospreys inside defensive shove, which allows Beirne and Botha to twist infield for the finish with O’Mahony adding the last jolt of low leg-drive power. The Ospreys had to collapse, and Berry was quick to jog under the posts for a penalty try and yellow card.

The penalty try on 15 minutes was a sign of things to come for the Ospreys, who lost another man to the bin later in the half and conceded three tries to the maul in total.

When the game was there to be won, Munster were able to get all the ball they wanted to build mauls off O’Shea, Beirne and O’Mahony. Compared to Glasgow, where we struggled in our lifts and throws, this was night and day.

Outside of the maul, we brutalised the Ospreys on transition.

Carbery ran in his first Munster try off a kick transition…

… and you’ve a picture of how Munster won this game, and added the extras when required.

Sweetnam’s try was my highlight of the game – Keatley’s outside shoulder line and offload to Botha, Botha’s fix, line and pass and Sweetnam’s elite finish – but this was a Munster performance that had more than enough highlights for everyone.

There won’t be any medals handed out for putting away this Ospreys side in the style managed here but the nature of our work in transition and in the improved set piece will be worthy of a further look in this week’s GIF Room.

Last week’s loss to Glasgow will rankle for a while but this selection here was closer to the kind of strength we’ll be looking to build on in big games this season.

Add the likes of Stander, Earls, the Scannells, Farrell and (eventually) Murray to this Munster matchday squad and baby, you got a hell of a stew going.

There were no notably poor performers here amongst the starting XV but when assessing this performance, we have to look at the top of the top.

Peter O’Mahony and Chris Cloete were massively effective in this game and showcased their elite ability to influence a game in favour of the way Munster want to play.

O’Mahony was outstanding in the lineout on both sides of the ball, superb on the floor and linked well in the outside channels, one poor carry aside.

Chris Cloete was an absolute menace at the breakdown – to put it mildly – and only blotted his copybook with three penalties, one of which was incorrectly awarded against him for not releasing the tackled player before jackaling.

He won man of the match on the day and almost got a five-star performance here too, but for a quiet endgame after successive shoulder and ankle knocks, none of which should make him miss time.

I thought Darren O’Shea and Stephen Archer had excellent games in the tight exchanges too.

Joey Carbery looked like the real deal and you can see how his work close to the gainline will bring in a tonne of options for Munster on phase play, transition and off of the set piece. A really encouraging performance that made a real impact on the Cork crowd. Box office.

Arno Botha had the type of all-action game that would make you think Thor looks like him, rather than the other way around. Supremely impressive.

But for me, the key performer was Tadhg Beirne. He played like the elite second row that he is, at this point. He scrummaged well, was a reliable lineout option, a good mauler on either side of the ball and was excellent in the ruck on attacking phase play.

His basics, as you’d expect, were spot on. Add to that two lineout steals, his usual feat of turning over all kinds of opposition, his ball carrying, his passing, his offloading and you’ve got as impressive a 50-minute cameo as you could want from a guy.

Beirne was incredibly impressive amongst a pack that had all four-star performers from the start. What a signing, what a player.

All of a sudden, Munster have depth in most positions, as the bench here and the guys sitting in the stands in nice coats would suggest. What we do with that depth remains to be seen but on this evidence, it’s supremely encouraging.