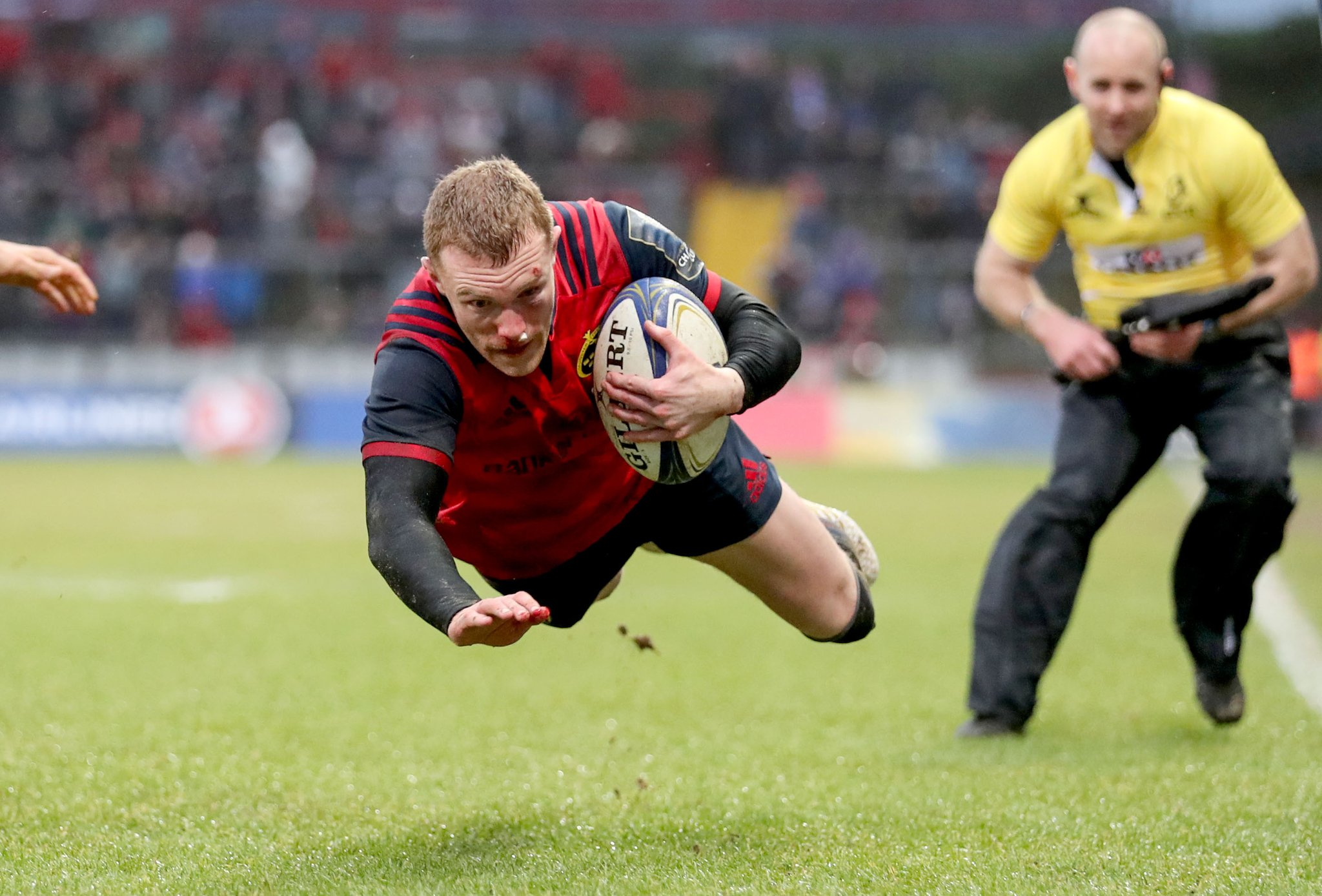 There comes a time in every big win when you feel the opposition break. It’s rarely a spectacular moment. It’s subtle, like the muffled crunch of broken glass under thick boots, but you know it when you see it. When you feel it.

It didn’t happen as quickly in this pool game as we might have expected but when it happened, everyone in the stadium could feel it. It wasn’t after Marshall’s try – Munster’s second – at the back of a dominant Munster maul. It was three minutes later when the Munster scrum began to systematically take apart Castres at the seams.

Castres – after being rinsed to the point of subbing their props – had escaped conceding a try due to Conor Murray spilling a ball while over the line.

The referee, Ben Whitehouse, had considered yellow carding a Castres front-rower but relented after their captain bought them a reprieve. “They’re only just on,” he pleaded and Whitehouse let them off. The very next scrum saw the Castres front row implode again;

Before they’d even worked up a sweat, the sub was jogging off for a 10-minute break. On the very next scrum, Munster were awarded a penalty try.

You could almost hear the crunch.

No French team is truly broken until you crack them in the scrum and that was the equivalent of a scrummaging TKO. Five scrums, a yellow card and the ref jogging under the posts. Crack.

From there, Castres were thinking about the flight back home. Munster would get the bonus point that would book Toulon into the Hurt Palace of Thomond Park in April a few minutes later, and all the worry, disruption and noise of the last few months melted away into the wet winter’s evening.

Nobody will write articles about how you’re European Champions Elect by thrashing Castres at home but if you want to be in the conversation, you’ve got to beat Castres with the brutal efficiency that Munster showed here.

Scraping by wouldn’t do. Even knowing that a regular 4-0 win was enough thanks to results elsewhere wouldn’t do. Given the season to date, it wouldn’t have done them justice.

Part of the Plan

Munster didn’t start well. Our kicking didn’t really hit the targets or outcomes that we might have hoped for as Castres managed under the high ball quite well. That meant we spent the initial quarter of this game defending and we managed it quite well. Discipline was good, our tackles were sticking and we were folding well on Castres initial attacking patterns.

After conceding a needless enough penalty – Castres only score of the game – Munster began to channel their aggression where it needed to be. The tempo picked up, as did the carrying accuracy. With that increase in pace, breakdown speed and carrying intent, Castres began to infringe early and infringe often.

Munster went in at halftime 13-3 to the good – thanks to the quick thinking of Conor Murray and the near-unplayable Keith Earls – but you felt that there were more gears to go through. Castres were certainly there for the taking and a lot of our work in the first half had the ring of tactical manoeuvres about it. We were working Castres, moving them around, but not really squeezing the areas where we had key advantages. We were happy to make them sweat, in the belief that it would pay off later.

I wrote pre-game about Munster’s advantage in the maul and scrum and both those facets only really came to the fore in the second half. Once the likes of Kleyn, Holland, O’Shea and O’Mahony began to take the ball down and work them, Castres had nothing for Munster in the maul. They were splintering, shearing off, coming in from the side and sacking late. The maul would produce multiple penalties and lead directly to three tries.

The maul, the scrum, the kicking game – these are the Big Rocks of Munster’s game and when they all fire like they did here, there aren’t many sides that can live with Munster at their best. Tactically, physically and mentally, Munster were superb.

When it came down to it, Castres were slowly, methodically and systemically beaten up.

Look at the forward carrying stats;

That doesn’t paint the whole picture, but it follows a familiar trait of all big Munster wins – the opposition pack getting eaten alive on the gain line with some old-fashioned Blunt Force Trauma.

Munster didn’t need six tries and a bonus point to get the reward their form in this pool deserved – a home quarter-final – but the twenty-three played like they owed themselves the kind of Good Day that only a big European win in Thomond Park can provide. In doing so, they repaid the fans that showed up twice on a day saved by the hard work of the Thomond Park ground staff and earned a 17th European Cup quarter-final and Munster’s tenth at home.

Munster will be dark horses in this tournament, but there’s nothing else we’d rather be – bar champions.

As per usual, players are rated based on their time on the pitch (no rating if on less than 15 minutes bar extraordinary circumstances), if they were playing notably out of position, and on the overall curve of the team performance. Dave Kilcoyne and Duncan Williams are unrated due to not enough time on the pitch.

Tonnes of big performers here. I won’t mention all of them, just the guys that stood out to me.

Ian Keatley – A really good day out for the man who just continues to take the right option again and again. He’s playing with a veteran confidence of a guy who’s been there, done that and has earned every plaudit that’s come his way this season.

He was just really, really good here. He took the right pass options, he kicked well from hand and banged over every ball he stood over. Exactly what you want.

Jean Kleyn had an iffy start to the game with that reversed penalty. It wasn’t ideal – obviously – but I can’t pretend I don’t want my second-row enforcer wrecking heads and whispering cruel truths into a pack as chatty and niggly as Castres. He was great thereafter.

He smashed rucks, mauled like an avalanche, ran hard, powerful lines like the above and dominated the tighthead side of the scrum for 80 minutes. Jean Kleyn can do it all.

CJ Stander – I have a theory about CJ Stander. People have been asking me why he hasn’t been the “CJ Stander of the Match” that he’s been for the last few years this season. I don’t think CJ’s levels have dropped. If anything, I think he’s getting better. I think the reason he hasn’t stood out so much is that everyone else has begun to get close to his levels of performance.

Look at that power. As ever, CJ’s biggest gift is his ability to do what he does in the 76th minute with the same impact as he does in the 3rd. He’s just as elite as it gets.

I have a special mention for the replacement front row (Niall Scannell and John Ryan) and Darren O’Shea for the beautiful cruelty of this scrum.

That one is worth right clicking and saving on.

A great performance from everyone today.

It’s been a rough couple of seasons for James Cronin. Anytime that he’s had a bit of momentum in the last 18 months, he’s gotten injured. He’s already been injured for two spells already this season and when he came on today, he must have realised what an opportunity had been presented to him. He grabbed it with both hands.

Cronin spent the afternoon torturing the poor unfortunates Castres put in front of him and his introduction marked a real, marked uptick in the Munster scrum. He played his 65 minutes with the kind of malice and niggle that Munster packs have depended on since forever but with modern day handling too. He was an animal at the breakdown on both sides of the ball, mauled excellently and topped the day off with a try off the back of one.

Absolutely outstanding in the context of this game and in his own season.

I’m sick of praising Keith Earls. Actually, that’s a lie – I could praise Keith Earls relentlessly, and with the fervour of a coked out street preacher. This guy just getting better with every game and it’s nearly easier to describe what he can’t do at this stage. He probably can’t lock out a scrum for you. I haven’t seen his goal kicking but I presume it’s not great. Can he paint? I don’t know.

What he can do, is bring an all-around quality to his position that not many players in Europe are matching right now.

He took an almighty belt into the face early on in this game, shrugged it off, and then;

Just look at that – the take from the touchline, the fake pass inside, the power step off his right and then his left, the acceleration, the fix on the final forward and the bravery to take the hit to give the pass. Not every player can do that – only the special ones.

I’ll have a tonne of GIF Specials on this game in the coming week on TRK Premium.