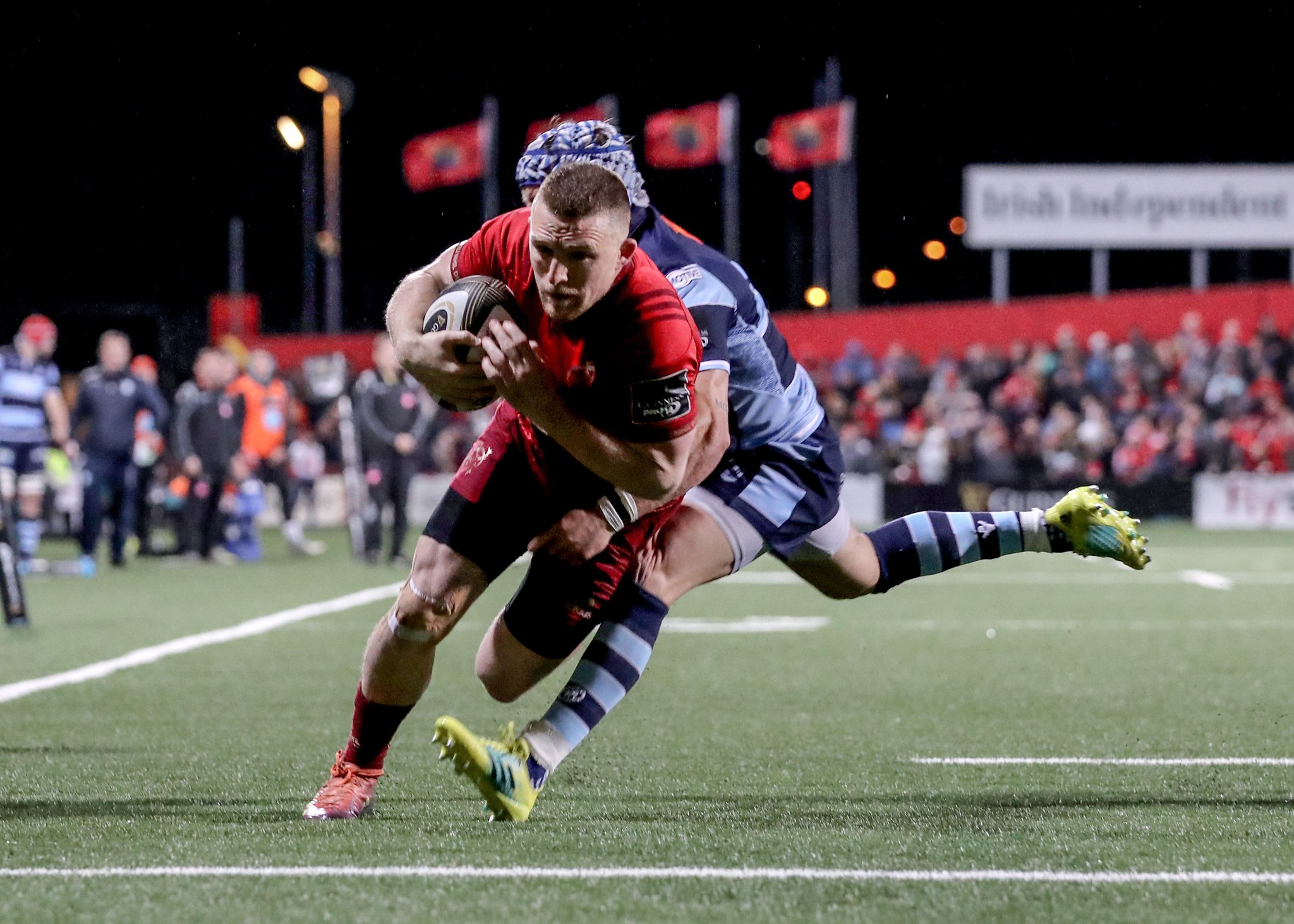 Beating this Cardiff Blues side by 24 points while scoring six tries is not to be sniffed at one week out from that quarter-final in Edinburgh.

I say “this” Cardiff Blues side because they seem to be chronically underrated in this conference and the PRO14 as a whole, despite being the current European Challenge Cup holders. Over the last five games in the PRO14, Cardiff are fourth in the combined conferences with 16 points out of a possible 25 so to say this game was far from a handy five-pointer at home is to be willfully ignorant of how dangerous this team are.

Listening to Johann Van Graan and Niall Scannell during the week will have illustrated how highly Munster thought of the Blues ahead of this game and for good reason – we got a fair pumping over in the Arms Park back in September. That’s why I’m sure Munster were more than a little disappointed to concede a try that seemed like a megamix of the first two tries that Cardiff scored that day;

A first phase strike up the middle of the field by Ray Lee-Lo with a finishing pass to the scrumhalf? It’s a mashup of these two tries really, isn’t it?

Same break position. Same player. Same kind of finish. Back in Round #4, the breaks came from missed tackles, this time around it was a little more clever from the Blues. If the missed tackles don’t appear, you’ve got to make space and Cardiff used really clever blocking lines to do just that.

You can see Halaholo snagging Bleyendaal on the decoy here, which means he can’t cover across to cover the space behind Farrell after Lee-Lo’s angled attack line;

That creates a pocket for Lee-Lo to surge into and he does excellently from there to get Williams away for the finish. The width Cardiff got off the lineout really attacked Bleyendaal’s acceleration – how quickly could he adjust after the snag? – and the Blues took the lead against the run of play.

Their second try late in the half would use the same principle. They attacked off a centre-field ruck position – again off a lineout – and then snagged the Munster edge defence – watch Thornton on Farrell here;

That creates the isolation on Conway for Anscombe coming around the corner with Summerhill outside him.

It’s clever attack and something that played well to Cardiff’s offensive strengths – they wanted an angle on the flanks and they got it off the set piece.

It’s nothing that Munster wouldn’t have expected. Our response to both tries – and even their third – was swift.

Munster’s way back into the game after conceding that try was to go back to exerting pressure on the Blues and playing off their exits.

After a good restart and forced exit, Munster pressed in transition and found Bleyendaal in midfield. In doing so, Munster showed exactly why teams kick the ball away. Watch this;

Great angle and pace on the ball from Bleyendaal – he’d been practising this very kick in the warmup – with a bit of luck, for sure, but the aggressive kick angle earned it. Look at how much ground Munster made by kicking the ball well, though.

Our starting ruck was just inside the Cardiff half without much in the way of momentum. 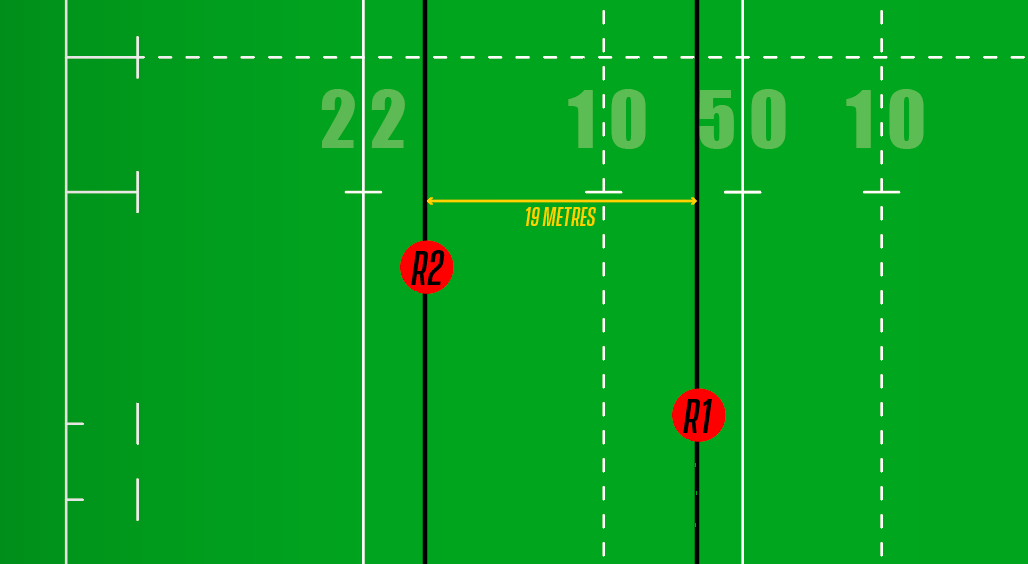 Our next ruck after that was approximately 19m ahead of that initial point right outside the Cardiff 22 – all from kicking the ball intelligently and well.

From Haley’s collection of Morgan’s exit, we were able to get field position that would lead to a penalty infringement and Munster kicking their way onto the scoreboard.

Our first try would come off the back of more solid basics.

Cardiff sent a restart deep, we took it, reset and box kicked our way to the halfway line. Holland attacked the Cardiff throw and, as he’s done a lot lately, turned the ball over.

After attacking Cardiff with ball in hand for a few phases, O’Mahony kicked well down the field, bought an exit from Morgan and Munster had a lineout platform almost exactly where we’d exited to back from the initial restart.

From there, we could attack Cardiff through our maul. We saw some decent results throughout the game from the maul but this one was one of our poorer ones. We made some ground infield but were lucky enough not to knock the ball on from the back. Seb Davies gifted a penalty a phase or two later with a no-arms tackle.

We ended up turning over the ball through Botha getting choke tackled off the back of a dominant lineout maul just inside the 22 but the territory we’d earned meant Cardiff were still under huge pressure with a 5m scrum deep in their red zone. The pressure got to them. Murray spooked Turnbull at the back of the scrum, his pass floated above Williams and O’Mahony was on the case.

Munster scored through Farrell a few minutes later. A close-range try from Jean Kleyn after a 5m lineout drive earned from a Cardiff high-shot on Farrell stretched the lead. Cardiff narrowed it again with their second try right before halftime through their trademarked lineout strike. They’d take the lead in the second half when Williams tapped and went off a Scannell high tackle and there was a real tinge of worry around Musgrave Park in the aftermath. Munster were compounding errors and starting to slip off some of Cardiff’s runners without slowing the resultant rucks.

What would get us back to where we needed to be? Pressure and poor exits.

We restarted. Pressured Williams’ exit and, when it didn’t make touch, Haley ran it infield and the Blues infringed at the breakdown.

Munter would bang it down the field, maul superbly and, after a Murray break, get excellent field position inside Cardiff’s 22.

From there, I thought we executed the opportunity excellently. We retained the ball well across the field and consistently pressured Cardiff’s defence and their decision making around the ruck.

We created the space for Stander to score by reversing our momentum on the phase play. Have a look at Bleyendaal, Farrell (in particular) and Conway here;

That punch under the posts by Farrell gave Stander the angle to attack and touch down for a crucial Munster try. We used Farrell to make the Blues stack numbers on the openside and then – after Farrell and Bleyendaal slipped back the other way and created a ruck point under the posts – Stander was able to drift in on the next phase and attack their prop’s outside shoulder as Thornton tried in vain to get across. Bleyendaal drained the conversion and, from there, the belief seemed to drain out of the Blues.

Beirne counter-rucked them off a kick exit, forced a knock on and Munster smuggled over a bonus point try. That was that. We added two more tries for good measure and kept the Blues scoreless for the last half an hour.

Given the opposition and the context – we had to win to keep the hopes of a home semi-final alive – I was quite impressed with Munster’s performance here. There was a real sense of a Munster style being imposed on Cardiff that persevered through the setbacks of the well taken Cardiff tries. We were able to reset each time, go back to our game and wait for the opportunities to come and, the thing is, we’re getting better and better at taking those opportunities.

We’re exactly where we were before the game – three points behind Glasgow – and we’ve got two tough home games to come. Whatever happens, we’ve got a home quarter-final in the bag and that, in its own way, is a decent return but this group of players want more than that. Two wins against Benetton and Connacht might just get that.

As for this one, it was a good win, a great performance and ample reward for another sold out Cork crowd.

This was a good performance.

Just to name-check a few I was impressed with.

Andrew Conway, Mike Haley and Darren Sweetnam had excellent games in the backfield. Really good run backs, hard chasing and great positioning on both sides of the ball.

Niall Scannell looked great off the bench. Massive workrate, great lineout work and looked really mobile and strong in contact. Dave Kilcoyne had a massive day carrying the ball and really imposed himself in the middle of the field.

Chris Cloete had his best performance in a while and looked close to his best again. He could have had three or four steals on the floor with a different referee and he was a constant problem for Cardiff at the breakdown on both sides of the ball.

CJ Stander had the kind of impact you’d expect from a player of his immense quality, while Tyler Bleyendaal and Conor Murray looked like the lads that were bossing Munster around the park in 2016/2017. The General rides again.

Two players really stuck out to me.

Peter O’Mahony was Man of the Match once again. I’ve been over and over O’Mahony this season to the point that anything else I say here would be repeating myself. Was he a nightmare on Cardiff’s throw? Yes. Was he Munster’s top jumping outlet himself? Yes. Did he make crucial turnovers on the floor at vital times? Obviously.

This is just what the War God does when he’s at work. He does things to the opposition’s possession that few other players in World Rugby can manage as consistently as O’Mahony has done this season. All hail. ★★★★★

Chris Farrell. He’s Powerful, yes, but this performance hinted at the kind of impact he had against Wales in the Six Nations last season. He bundled over for Munster’s first try up against a blindside flanker and the hard-hitting Willis Halaholo in close quarters and never looked like anything else would happen the minute he shaped up onto the ball. He’s Mr Gainline.

But Farrell’s not just a 1.91m, 110 kg bruiser with the ball in hand. If he was, he’d be half the player. What really stands out from Farrell is his passing range off both sides and his pace.

He whips this pass 20m off his right-hand side to put Haley outside the last defender and give Conway every chance to get over in the corner. He can kick the ball with intelligence and subtlety, too.

His partnership with Rory Scannell is really coming on and this game was a good example of what Chris Farrell can do when he’s fit and firing. As important a player as we have in our first XV right now. Powerful. ★★★★★