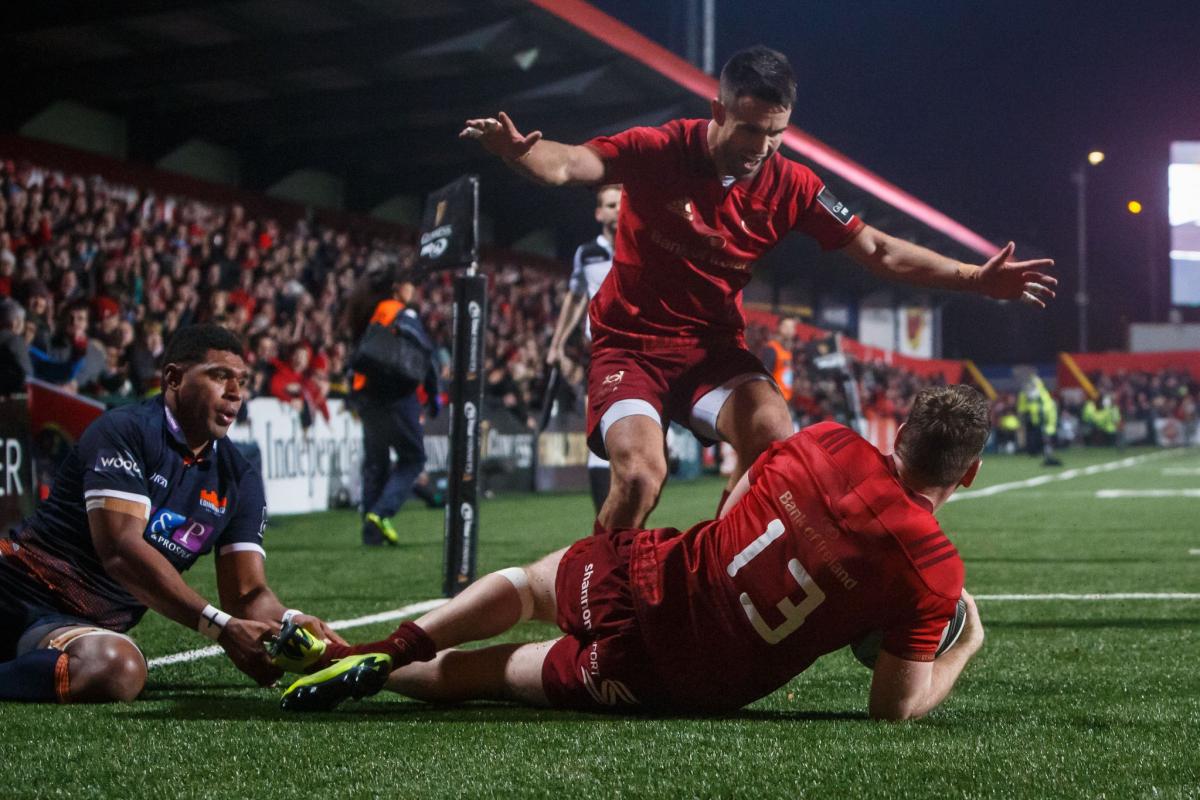 This game was over, for all intents and purposes, inside the first 20 minutes.

Everything after that was a form of performance management. That initial 20 minutes from Munster, though – phew – that was spicy stuff. It was such a good start that Richard Cockerill didn’t even seem that cheesed off after the game. If anything, he had the look of a guy who expected rain and was glad of the umbrella. This was an expected loss from Edinburgh and one they went into with their eyes open. A future game between the two sides – which, if it’s to happen this season, will be knock out rugby – won’t look like this game did when it comes to the unbalanced teamsheets, but everyone at this game knew that coming in. Edinburgh rotated their squad heavily for this contest but that didn’t matter to the sold out, 8008 people in Musgrave Park. In a lot of ways, the opposition didn’t really matter. The “Sold Out” signs outside the Dolphin end of the stadium were a reflection of the enthusiasm for Munster’s selection. All but Joey Carbery and CJ Stander were included in a very strong selection and the Cork crowd responded, making a mockery of the idea that you need “big names” on the opposition team sheet to sell tickets in the PRO14. The dozens of people who turned up looking for tickets only to walk away disappointed while I stood around waiting for my broadcast partner for the night were a testament to that enthusiasm.

The question wasn’t “will Munster win?”. It was “how will Munster win?”. Like the Ospreys earlier in the season, the challenge Munster faced was how they could go about constructing the win given the relative calibre of the opposition. That will immediately sound like a slight on Edinburgh but shouldn’t be taken that way. The fringe guys and debutants they played alongside established guys like Van Der Walt, the excellent Van Der Merwe and Dougie Fife were overmatched physically but look to have good potential, especially Taylor and their young second-row pairing. They just weren’t ready to take on the team that Munster selected and the result showed that, but no more so than in the opening quarter.

Munster put the foot down inside the first 20 minutes to extinguish any best-case scenario dreams that this young Edinburgh side might have pre-game.

Munster’s initial two tries came from the same lineout movement with a slight variation across both schemes.

The first try came from a massive carry up the middle of the pitch from Arno Botha off the top of the Munster lineout.

Edinburgh never recovered from that strong initial bust and Munster continued to surge over the gainline until they reached the 5m line, where Chris Farrell converted from close range. Let’s have a look at the lineout move though.

Scannell ran a heavy inside line off the lineout to bind the Edinburgh tail gunner – Hamilton – and Jaco Van Der Walt to a narrow defensive position. 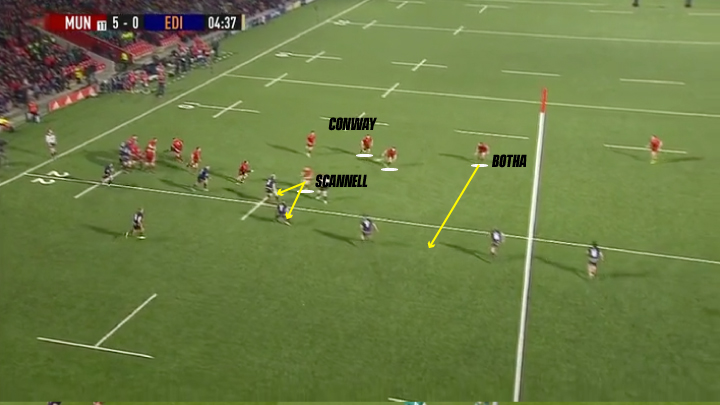 That gave Hanrahan, who took the ball off a scrappy pass from Cloete, a look at putting Botha through the extended space up the middle of the field. Look at Conway lurking on his inside shoulder, though. That will be important later.

From a similar position 10 minutes later, Munster would use the exact same move but with the “B” variation.

Look at Scannell running the same inside line, look at the Edinburgh cover moving out to number up on Botha but then look at Hanrahan popping the pass inside to Conway. Edinburgh reacted to the lessons of the first lineout with their defensive structure but Munster hit them with the variant off the Scannell inside decoy line. Clever stuff.

That put Munster 12 points up.

A few minutes later, Munster sealed the deal with a superb bit of phase play based on the astounding physical characteristics of Chris Farrell. Here’s the try for Conway;

It’s a great execution of the three on two by Hanrahan, Haley and Conway but the key work was put in by Chris Farrell.

The sheer threat of his ball carrying drew in the Edinburgh edge defence and when he pulled the ball back to Hanrahan at the very last minute, he cut off their scramble and made the 3-2 overlap for Munster to execute.

This was a nice bit of attacking phase play, built on a “super-load” off a wide ruck.

Look at the group of players that secure Andrew Conway’s wide carry here.

All of those players – Cloete, Farrell, Haley, Earls and Conway – would play a vital part in the next attacking phase.

Munster hit the ball up through Hanrahan and allowed that support pod to reset on the short side. Edinburgh folded around the corner and forgot about the five Munster attackers resetting post ruck. 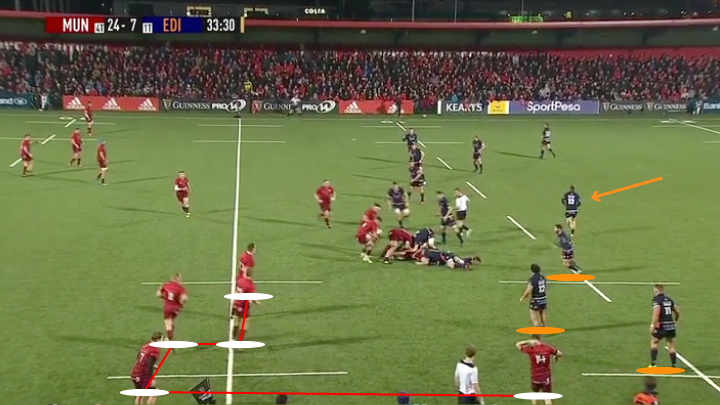 That left Edinburgh’s short side defence facing a “super-load” in the 15m channel. With a guy as dynamic in contact as Chris Farrell, that’s a big problem. When the ball comes to Farrell he beats two defenders, offloads to Haley and the fullback has his pick of Earls and Cloete for the finish.

It was a superb bit of attacking work. Have a look at how it developed from the end view.

That’s very hard to stop if Munster’s handling was where it needed to be, and it was. Munster would add a sixth a few minutes later – an attacking sequence sparked off by a Conway offload on a kick transition – and Munster were home and hosed.

I spoke pre-game about Munster looking to target Edinburgh with angled kicks in behind Duhan Van Der Merwe, and they certainly used that gimmick a few times.

Munster chased well, pressurised the Edinburgh exit consistently and then used that generated field position to score two tries that would set them on their way handily.

The second half drifted away as Munster, with a bonus point secured inside 30 minutes, were able to coast home relatively drama free. They defended the third quarter Edinburgh pressure quite well. Edinburgh had 72% possession in the second half but most of that was spent getting pressed back by a very physical Munster centre-field defence. Edinburgh did score through the impressive Van Der Merwe off a scrappily defended maul on penalty advantage, to go with the big South African’s try in the first half, but Munster still managed to win the second half try count 2-1 through Bleyendaal and Farrell.

In the end, the win was routine but the crowd went home smiling with Castres on their mind, as did the players and coaches. It won’t be this easy this week – you’d imagine – but if Munster can duplicate the attacking intensity of the first 20/30 minutes here, Castres will be under the pump.

This third five-pointer in a row copper-fastened second place in Conference A, brought us to within three points of Glasgow (with a game to play for the Warriors) and put everyone in good form heading into the Heineken Cup. Nice stuff.

Everyone played well here, relatively speaking, so I should explain why I marked Bleyendaal down in a game where Munster won by 30 points.

I thought Tyler Bleyendaal was a bit off the pace, to be honest. This isn’t about missing two conversions – JJ missed four, which is problematic in itself – but in his general play where I thought he was a bit stiff and over-reliant on the boot, which lacked accuracy at times. Munster’s pacey attacking style didn’t flow as well as it did while Hanrahan was running things at 10. He had good points, of course. His nicely taken try and his line and pass to put Farrell away at the end were highlights but this wasn’t a great 40 minutes from Tyler and I know he’s got much, much better in his locker.

Chris Cloete was a bit off the pace too but got bumped up to three stars because of the excellent openside basics he displayed. He seems a little off form to me, given what we know he can do when he’s at his best.

JJ Hanrahan, conversions aside, was quite good when he was running the show at #10. His work on our wide plays and general high tempo movement was really good, as was his kicking from hand in open play. His conversions were such an issue for him that he took the time just after the halftime whistle to line up a kick to “exorcise the demons” of the missed one prior. A good performance overall.

Keith Earls is the Man.

Tadhg Beirne had another excellent performance. He’s such a menace on defensive sets and demands constant attention ruck to ruck. He made three excellent steals at the breakdown and slowed Edinburgh worse than the traffic coming from the airport. Superb.

I thought Gavin Coombes had another impactful run off the bench here. One excellent lineout steal was preceded by a lovely flick of the ball to Keith Earls that lead to Bleyendaal’s try off a scrum. He’s a real talent.

Chris Farrell was the man of the match on the night and boy, was it deserved. The Fivemile Goliath was bordering on unplayable at times here. It’s not just that he’s a monster in contact and guys look like they’re tackling a speeding land rover when they angle up on him – it’s his passing range off both sides and his offloading ability too. He played like the guy who won a Six Nations man of the match award right before his injury eight and bit months ago.

He made grown men, professional rugby players, look like they had no business being on the same pitch on him at times. He was one of Munster’s primary heavy carriers and we just look like a more dangerous side when he’s playing like this. Powerful. ★★★★★