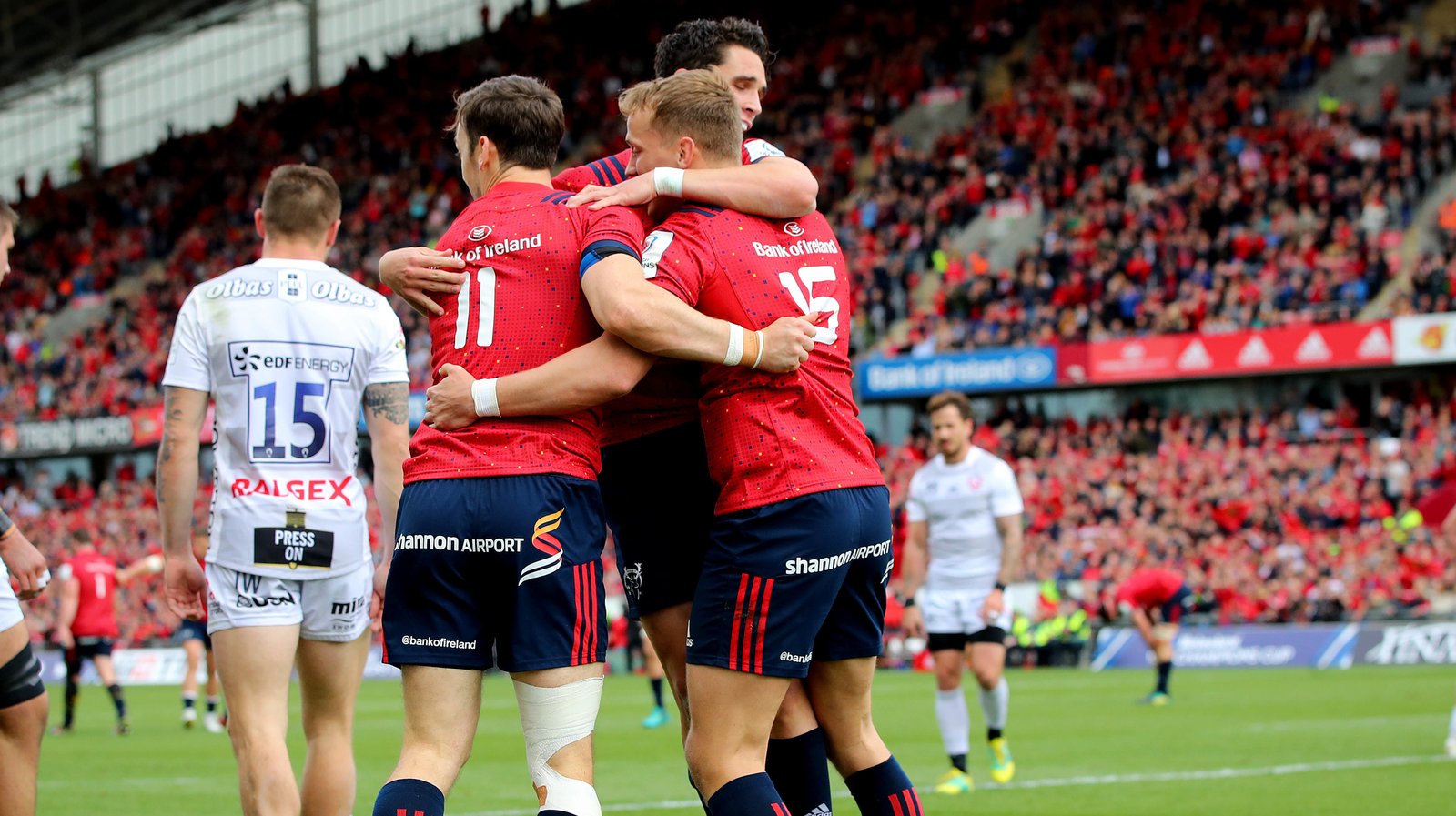 The talk post-game will be about Danny Cipriani, the “game going soft” and Munster’s scrappy, error-strewn performance in this bonus point win.

Only one of those talking points is worth addressing – the latter – and I’ll get to that. The former, Danny Cipriani, is worth no more consideration than accepting that, while the red card might seem harsh, this is exactly the type of shoulder to head contact that World Rugby are looking to eradicate from the game.

The Gloucester flyhalf wasn’t trying to “do” Rory Scannell – even if the game had taken on a fractious edge since kick-off – but that doesn’t really matter. You can see he’s trying to stand Scannell up in the same way that Johnathan Sexton does but he’s got his angles wrong to do it without incurring a sanction. The shoulder to face contact meant it was an automatic red.

Just like how Archer’s above the shoulder tackle was worthy of a yellow card at the bare minimum.

And how Billy Twelvetrees was quite lucky that his shoulder to face shot came just five minutes after Cipriani’s red card and the referee didn’t fancy handing out another yellow or red card to Gloucester in a half that already had one of both already.

It was that kind of game.

In fairness to Danny Cipriani, he accepted his punishment with a lot more dignity than the usual parade of clowns and gimps complaining about the “game going soft” in the aftermath did. Those people aren’t worthy of the calories my fingers would use while trying to describe their oafish opinions here so I won’t bother. All I’ll say is this – tackle lower and you won’t get a card. It’s just that easy.

Anyway – there was a game on, wasn’t there?

Sure, Gloucester left with nothing – a closer run thing than it should have been – and Munster finished the day top of the pool after Exeter lost to a 14 man Castres side in the Stade Pierre-Fabre, but this was a fitful performance with attacking quality and defensive grit dotted alongside handling errors and a badly malfunctioning lineout.

Those errors drained Munster of the momentum that we usually like to create in these games. That momentum, if you can imagine it like a slowly building power meter in a video game, can crack teams open in Thomond Park when Munster really get going. Munster’s attempt to get that momentum meter going was consistently interrupted by unforced errors.

Those are just a few examples of how scrappy our work was in the loose – poor passing, poor running lines and poor ball security. It was like the botched kickoff that started the game infected the Munster ecosystem and spread throughout much the rest of the systems that we rely on.

The lineout didn’t really function at all in the early going and that alone was a massive part in letting Gloucester grow into the game in the early going. The very first Munster lineout showed the hesitancy plain as day. Munster waited an uncharacteristically long time – as if trying to remember the lines – which forced a bit of scramble at the front and that resulted in a blown lift on Kleyn.

That will have given Gloucester a real lift – pardon the pun – and added the fuel of belief to the undoubted instructions of “we CANNOT get bullied here” pre-game. Gloucester were physical – too physical at times – and the contest threatened to spin out of control for a while.

I think we were trying to move Gloucester around on the floor to attack their lateral speed in the lineout as I mentioned in the Red Eye – see below;

But we weren’t always accurate enough with our timing, movement or lifting.

All this sloppiness, combined with the previously mentioned issues from the ruck and further out, meant that Gloucester had the kind of start to the game that encourages hope before indiscipline let them down.

Munster got a grip on the game eventually but were aided by Gloucester’s shocking lack of tackle discipline. If Danny Cipriani’s shoulder job on Scannell was the first incident of Gloucester “enthusiasm” it might be forgiven but it was far from it. Gloucester’s Tom Savage (yes, I know) saw yellow for a fairly nasty looking no arm shot at the ruck on Dan Goggin that might have seen red all on its own. Munster scored a few minutes later after a superb bit of work from Conway, Sweetnam, Carbery – in particular – and Mike Haley.

That let the pressure off a tad before a Cipriani penalty piled it right back on again with a penalty almost straight from the restart. It had the look of a complicated day with Munster playing so poorly. Then Cipriani got a red card and everything got much more simple.

Munster scored a few minutes later and added the Hawaii 5-0 early in the second half. So far, so good.

We were executing well in the Gloucester red zone, albeit aided by the man advantage off maul and scrum, but the finishing touches were nice all the same.

Carbery was prominent on both of these finishes, as he was in the build-up to Arnold’s try. When Conway jogged in for Munster’s fifth try in the 67th minute, there was no telling what the final score might be.

How right we were.

The scoreboard on 67 minutes – 36-10 – looked extremely healthy given the patchy nature of Munster’s performance to that point but the end game played out about as bad as it could have without giving Gloucester a losing point. The last 10 minutes saw Gloucester embark on on a mini-revival that saw 10 (I think) penalties awarded against Munster, two yellow cards and saw two more Gloucester tries added to their tally. Their revival was such four-try try bonus point in defeat was on the cards with the last kick of the game but Munster, for their own sake in the pool, managed to turn the ball over.

That last 10 minutes – along with much of the rest of this game, in fairness – will be cause for much consternation this week. We seemed to switch off as the bench transitioned and gave Gloucester enough of a glimmer to push it really close to leaving with a bonus point they would have hardly deserved to that point.

So where does that leave Munster?

Top of the pool with 7 points and undefeated as Exeter crashed to a defeat against 14-man Castres. Munster are in the absolute driving seat in this pool and the doubleheader against Castres provides an opportunity to nail the second placed French champions while Gloucester and Exeter metaphorically slice each other open in their back to backs.

All told it should be happy days but I think Munster will come away from this game with more than a few of those dreaded “work-ons” and a tasty enough video review session. It was good, like finding a €20 note in an old coat but it’s got a bit of chewing gum at the end of it. Good, but annoying nonetheless.

Munster just weren’t very good for large stretches here, despite the five points and healthy winning margin. The game was won without much in the way of fluent rugby from Munster, with a malfunctioning lineout and unforced handling errors to beat the band. While the pundits work out which cliche to spew this week – is winning with a bonus while playing poorly the mark of a good team or did the win Paper Over The Cracks? – Munster will be back in action with Glasgow next week with a lot to unpack against the Conference leaders. For now in Europe at least, it’s all good. There’s work to do, sure, but it’s always best to do that work clear at the top of a pool rather than scrapping it out further down.

Until December and Castres, Munster will be happy enough, relatively speaking.

The Wally Ratings: Gloucester (a)

Tadhg Beirne was, once again, one of stand out player on the pitch for me. His work as a defensive countermeasure to even the heaviest of Gloucester pressure was incredibly impressive and showed his test potential ahead of the November tests.

His relationship with Kleyn is building in every game and although there were a few lineout blips here, his work in the main was worthy of five stars. If he continues playing like this, there’s no shirt Beirne can’t earn.

I thought Peter O’Mahony and CJ Stander had two outstanding physical games. O’Mahony was his usual nightmare self on the opposition throw while Stander was a dominant force in defence up the middle of the field and shone through with his workrate on either side of the ball. It was fitting that Gloucester’s hunt for a bonus point was killed stone dead by an O’Mahony turnover.

The Baddest Guy of them all wouldn’t be denied the 5-0 and so it came to pass.

I thought Joey Carbery played really well here. He managed to show off his skill set and composure on multiple occasions in open play and off the tee while rarely overplaying his hand.

Watching him stutter step and draw out Gloucester before putting away Arnold for the bonus point try was almost as good as watching him score his own a few minutes prior.

He’s maturing into the player we imagined he might be quicker than we could have hoped. Outstanding.

There’s much to cover in this game and I’ll be doing that in TRK Premium all week long with GIF and Video Articles. Be sure to check out the Post Match Wallycast on Monday to hear from O’Mahony and Van Graan post-match and from the Munster press conference building up to Glasgow.