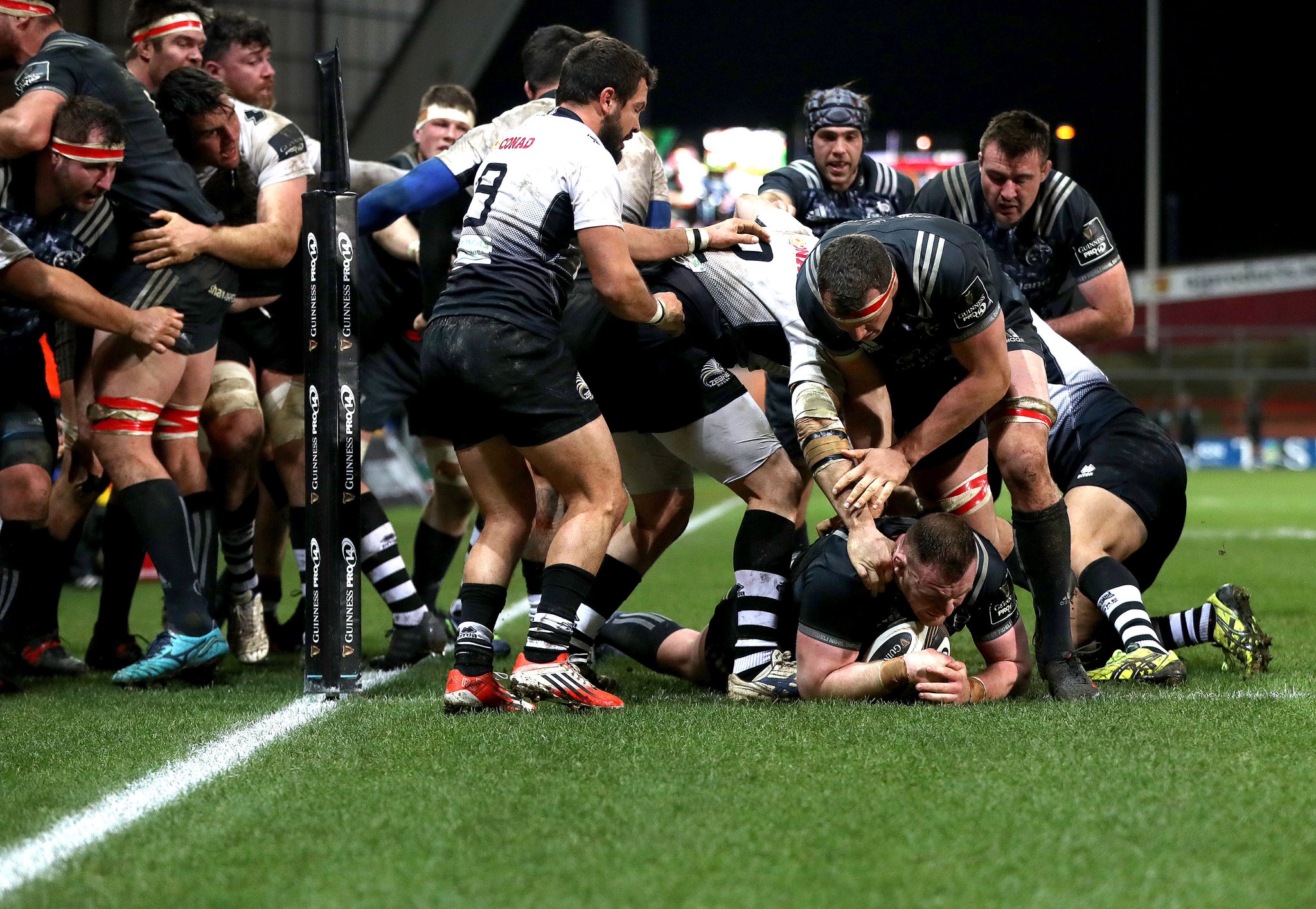 Some test window games are like the trip up the N20 from Cork to Limerick on a bad night.

All that really matters is getting to your destination. Yeah, you could have been a little more precise driving through Buttevant and sure, you could have done a better job of avoiding that pothole outside Charleville but ultimately, getting up to Henry Street car park without killing anyone or wrecking your car is the important thing.

Munster’s destination on a cold, blustery night in Thomond Park was Five Point City against a game Zebre side. It doesn’t really matter how they got there – with a few scratches and some odd noises coming from the engine – all that really counts is the score; 33-5 with five tries was enough to propel Munster to 48 points. That puts us seven ahead of the Cheetahs and moved us to twelve behind Glasgow with a game against them to come.

That isn’t to say that the good (and bad) moments of this game aren’t worth talking about, but it should inform the context of the performance.

The opening twenty or so minutes were fairly rough watching but that shouldn’t be too much of a surprise. We looked a little “off” with some of our pass options, ruck support lines and attacking alignments but that’s what happens when you have a rake of new combinations, guys returning from injury and players getting their first live game time with a few games.

Cohesion is a valuable (and rare) commodity in the modern game and it’s only really created through time together as a unit on the pitch.

Looking back at the game, it’s clear enough that we wanted to get pace into the game early to work Zebre and test their defensive cohesion (there’s that word again) but errors let us down at key moments. We were aligning quite wide in attack, and that put some pressure on our passing, given the tempo we were looking for.

Handling errors and penalties really let the air out of our tires in the first half and undid what good work we managed in that period.

We scored a few tries though, which showed that we had the ability to make things happen when we made good decisions. Scott’s powerful try off the back of a maul was impressive in its simple brutality and this little number from Sam Arnold was a really nice bit of incisive rugby;

The quality you saw here – quick ball to Hanrahan, Oliver’s superb handling and Arnold’s power finish – just didn’t happen often enough in the first 40 minutes and Zebre took a lot of impetus from that.

If anything, Zebre did what Italy were looking to do a few hours earlier in that they did their best defensive work by hanging onto the ball. Italy gave up 63% of the ball to Ireland in the Aviva Stadium and got smoked. Zebre had 56% of the overall possession in this game and looked a live threat well into the third quarter as a result.

When Zebre scored their try in the 52nd minute – which I don’t think was grounded, by the way – off the back of a series of Munster errors, there was a real, genuine smell of an upset in the air.

To that point we had used the ball incredibly poorly and that had invited a lot of Zebre pressure in dangerous areas. People don’t realise that the halfbacks are key defensive players; not with regards to tackling, but with how they use possession. When you kick poorly, take a pass option that leaves you exposed to a turnover, or make a passing error, you turn attack into defence in an unexpected fashion. This, as we know, is the most dangerous of all the loose phases to defend. Nothing knocks you out like a counter-punch.

This is why halfbacks come in for the biggest amount of criticism (and praise) during a game. If your halfbacks play well, you will generally play well. If they don’t, then you’re in trouble.

Neither Williams or Hanrahan played particularly well in this game, let’s just get that out of the way. Both had good moments (like in the build-up to Arnold’s first try) but overall, I felt that neither were able to put a pattern on the game. That comes down to a lot of things – new combos around them, rustiness, over-eagerness and the demand for pace on the ball.

Two moments stick out to me as summing up their games;

Firstly, Duncan’s decision making here was way off. This option was the worst possible one he could have taken, and with the worst execution on top of it. But it’s not just Williams’ error.

What was Hanrahan doing here? He was too far away from Williams to take a pass at the gainline and too far back to help clean him out if he took contact. Williams is just running into a wall of white jerseys with no support. For me, Hanrahan has to demand this ball from Williams when their runs intersect so that he can make something happen with the boot, or by running it. Was his confidence low after two blown kicks a few minutes prior? Possibly.

Either way, both guys will be kicking themselves after this one.

This is the other moment. It’s small, but it highlights what I mean about pass options being defensive actions as much as they are attacking ones.

Hanrahan’s pass goes to Cronin, who has only one forward clean out supporter and Munster end up giving away a penalty as Zebre swarm all over the point of contact. With one pass, attack becomes defence 40 metres up the field off this penalty.

But it shouldn’t have happened – look at Wootton’s screen line behind Cronin and Copeland. If the ball goes to Wootton here, Munster would have had a 4-2 overlap in acres of space with power runners and pace finishers all over.

It’s these little moments that accumulate into dangerous situations during a game and it’s another reason why halfbacks are paid the big bucks. Good decisions cost big money, but bad decisions are even more expensive.

It will read like I’m killing JJ again here but all I’m really highlighting is his lack of “flow” at the moment. I really do feel he just needs a “moment” in a game to flick the switch back for him. The bitty nature of the performance up to 52 minutes wasn’t all on Hanrahan and Williams – the game isn’t that reductive – but they’ll know where they need to improve.

One way or the other, something had to change, and the introduction of Ian Keatley and Rory Scannell changed the game from a Munster perspective. How did they manage it? Just by making the right decisions.

Then, two minutes later, this happened off turnover ball;

And just like that, the bonus point was secured. From 12-5 and panicking to 26-5 and cruising in six minutes.

From there, Munster saw out the game fairly handily, gave debuts to John Poland and Gerbrandt Grobler, and added a bit of varnish to the scoreline with Sam Arnold’s excellent second try, Munster’s fifth of the evening.

This game won’t be making many end of season highlight reels, but Munster did the job eventually. In a lot of ways, the experiences of the first 52 minutes might help with the cohesion we’ll need in Cardiff and Cork in the coming weeks.

As per usual, players are rated based on their time on the pitch, if they were playing notably out of position, and on the overall curve of the team performance. I didn’t rate Jeremy Loughman due to less than 15 minutes on the pitch.

Not a great evening’s work.

JJ Hanrahan seems to almost have a form of “writer’s block”. He mixed some decent work with the ball in hand with some poor decisions and some iffy execution off the hand and boot. The conditions wouldn’t have helped him (neither did some of the erratic passing from the base) but this is a game he’ll want to run back. Like I said earlier, he just needs a “moment” to click things into place for him, as he looks low on confidence right now.

Duncan Williams had a marginally better game than JJ but wasn’t great overall. He looked to be a little hurried in his work and executed some of his basics quite poorly. This kind of game can happen for scrumhalves though, and he’s got the right stuff mentally to bounce straight back to what has been his recent baseline of good performances.

Pretty decent game by these lads.

Jack O’Donoghue didn’t have the kind of impact that he’s had in recent weeks but did some good defensive work at the lineout. A quiet enough performance.

Gerbrandt Grobler finally made his debut and got a good reception from the Thomond Park crowd.

After all the fuss, I thought Grobler was decent enough when he came on. He looked a little rusty but made some good contributions on maul defence and at defensive rucks.

I thought Dan Goggin made a decent return from injury and brought some good physicality to the midfield exchanges. Same for Dave O’Callaghan, who had a decent shift off the bench.

I thought James Cronin, Niall Scannell, Brian Scott and then Kevin O’Byrne and John Ryan had really effective performances for Munster in this game. The scrum was solid, then destructive with the introduction of John Ryan, who scrummaged like an angry man and vaporised his man on more than one occasion.

Brian Scott and Niall Scannell were very prominent around the pitch, with Scott being particularly impressive. James Cronin was a key defensive player in the tackle and at the breakdown. Good stuff.

Billy Holland and Jean Kleyn were the perfect combination of guile, graft and blunt force trauma. After some initial discipline issues, Kleyn really grew into the game as a destructive physical force.

Robin Copeland was the man of the match on the night and really deserved the recognition. He had one of those games that he has where he looks like a guy that could be in Carton House. He was physical, smooth off the back of the scrum and really dominant in defence. The onus now is to back this up the next day. Really good performance.

I thought Sam Arnold looked quality. He carries with bad intentions and has the exact kind of fever pitch aggression you want from a midfielder. His two tries were a product of being in the right place at the right time, which is exactly what you want from a 13. He’s still only 21 but he’s playing like a 50 cap guy. He’s grabbing his opportunity with both hands, and maybe his feet too. What a prospect.

John Poland came off the bench for his debut and looked really assured, to the point that it didn’t look like a guy making his first PRO14 appearance. Snappy passing, good mobility and decent decisions. Great start.

Alex Wootton looked quality in the #11 shirt again. Constantly looking for work off his wing and was effective in possession.

Ian Keatley and Rory Scannell came off the bench and helped Munster ease to a bonus point win. They were sharp, direct and played with real intelligence in their time on the pitch, and looked like the pair of returning internationals that they are. Superb performance.

Exactly how many Conor Oliver’s were playing here? He was quick hitting in defence, carrying hard in the tight and loose, he was rucking, he was setting up tries, he was everywhere. He plays with a real pace and energy that marks him out as the most exciting openside prospect in the country. A turbocharged performance.

I’ll have GIF and Video Analysis of this game on TRK Premium, which you can access for just €2 a month.