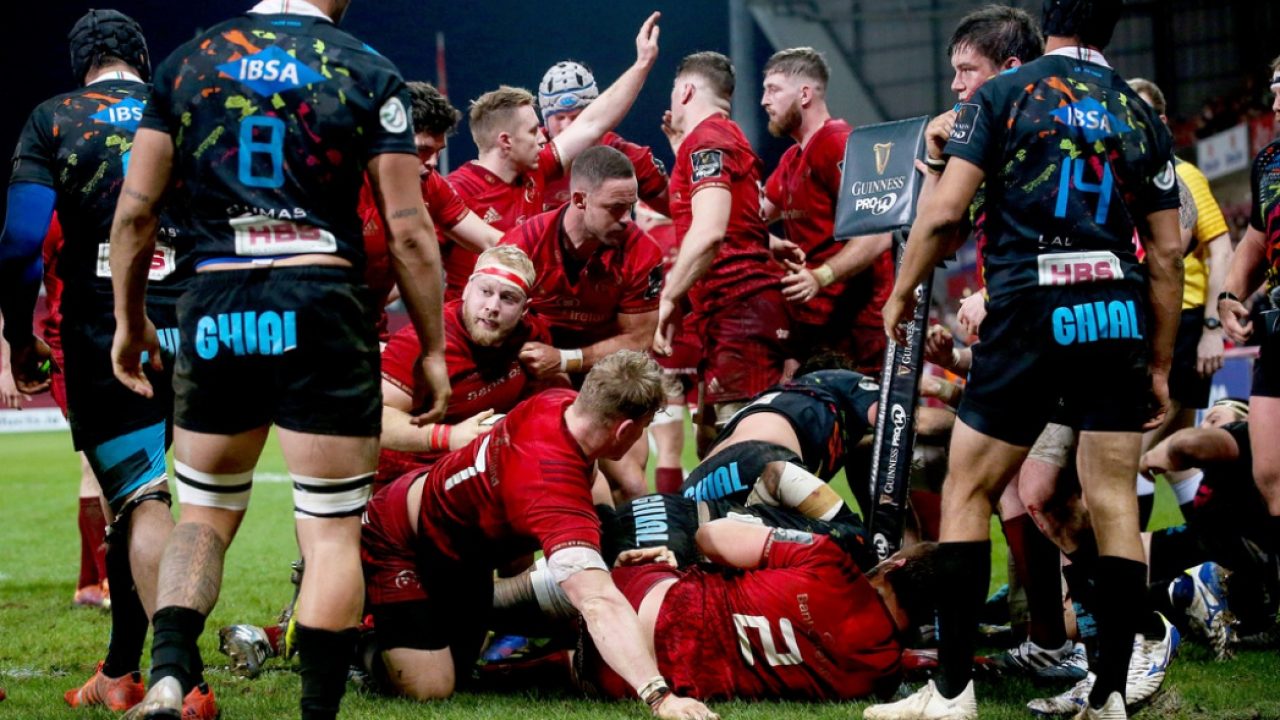 As preparations for a European Cup Quarter-Final go, this ended up being much more of a run out than we might have thought pre-game.

We looked awful for large periods here – in the first half in particular – and yet, despite that, we ended up with a comfortable enough bonus-point win and some encouraging notes to take into next week’s quarter-final. There won’t be anything directly to apply from this game to next week, but the manner of Munster’s progression from 12 points down to 31-12 winners in the last 43 minutes of this game will be pleasing enough. With 30 minutes on the clock, however, Munster looked in pretty bad shape.

At that point, Munster had conceded two scrappy tries off the back of some energetic attacking work from Zebre and we were two missed penalties away from facing a near mountain to climb in the remaining 50 minutes.

Much of Zebre’s good work came off the back of energetic – to the point of frenetic at times – attacking play that ran the line between skill and dumb luck. Liam Toland on Eir Sport comms made an awful lot of Zebre’s supposed “footwork before contact” as being the unique thing about their attack – and how it compared negatively with Munster – for me it was the width they got on their phase play, combined with how flat they were playing to the gain line.

On this phase, you can see them hitting contact right on the gain line and making the initial bust by going after Hanrahan outside the last forward defender.

Thereafter, they essentially turn their phase play into transition style play with their play decisions – a scrappy pass back to #10, a shallow cross-field kick to a flanker who offloads to nobody in particular before going all the way across the pitch again.

Then you have a kick feint, two nice offloads in sequence and some decent lateral hands that looked nice but didn’t draw any Munster players out of position.

This was most of Zebre’s attacking work in microcosm – high risk, energetic – and in the initial 20 minutes, Munster struggled to get a decent stop on their phase play.

Zebre had the rub of the green with a few passes that looked a hair forward, sure, but that’s common enough in today’s game and can’t really be cribbed out too much. A few of the other “rubs of the green” are a little tougher to take; holding off the ball chief amongst them. Here are two incidents in the build-up to the first try.

The Cloete one is small enough, but it’s enough of a stall on his momentum to create a linebreak that Zebre would score from a phase later. Mike Haley’s error in the backfield led to try #2 in the 18th minute and then that would be it from Zebre as far as attacking vigour would go.

Munster would do the majority of the pressing for the remainder of the 80 minutes, with varying fortune – at least in the first half. We spilt ball on the 5m line, we knocked the ball on, we kicked a little aimlessly on transition.

This strike off a lineout was nicely constructed up until the end.

Goggin sliding off Scannell’s line was a nice touch and allowed Scannell to really tear into the line. Goggin’s pullback to Hanrahan was perfect on the next phase and it’s really unfortunate that the kick didn’t work out because we had two runners attacking the outside with the Zebre fullback running too far ahead of the ball.

Munster earned a fair few penalties around this time but were constantly thwarted on their close-range lineout drives. I felt Zebre were a little fortunate not to be penalized more on their maul defence but that seems to be a common trend these days.

Their defence on these two maul sets seemed to take advantage of the tendency to allow lads to swim up the side of the maul as long as they’re still on their initial bind. It allowed Zebre to soak up Munster’s initial drive and then use their “upstream” positions to push Munster’s drive from the side of the maul – a position they wouldn’t have earned driving straight on.

You can see Munster trying to “ride and slide” the Zebre touchline shove on both occasions but they didn’t get the initial momentum to ride out the initial shove and pivot the maul against the grain of the counter shove, before sliding across their shove to get to the try line.

Legal defence or not, it would have worked. With the clock gone red, we finally managed to “ride and slide” to get on the scoreboard.

The take is solid, we pivot around O’Shea’s build position and then use Zebre’s touchline shove to drag ourselves up to the try line, where we can finish relatively easily.

In the second half, the referee seemed to change what he would allow in the maul and, without being able to swim up the side, Zebre conceded three more tries to the Munster maul.

Do you want some maulage? What am I saying – of course you do.

The bonus point was wrapped up without much in the way of fuss in the end. Panic? What panic? The impact of the bench – Bleyendaal, Farrell and Kleyn in particular, but all the bench players in general – was the real killer for Zebre in the end. They couldn’t handle the power Munster brought on phase play or the set piece, with the maul being ultra effective as the game wore on and Zebre ran out of gas.

It’s hard to know what, if any, will be taken out of this game as far as next week is concerned, except perhaps what not to do. Edinburgh are not Zebre – to tell you something you already know – and giving up a 12 point lead in the first 20 minutes of next week’s game is not something that will so easily be recovered. Even when Munster were down 12-0 in this one, you never really felt that we were going to end up eating a shock loss. There was frustration, yes, but never panic. Once the errors dried up, we were patient, well structured, more intelligent, ultra-physical and finished the game off very strongly.

Five points banked, another home win in the bag and three games to try and nab a home semi-final from Glasgow, who currently sit three points ahead.

The initial 20 minutes was pretty poor but once we got a hold of the game, I thought everyone played pretty well.

Mike Haley had a rotten start. His error that lead directly to Zebre’s second try was exactly the kind of nightmare that can happen to you when you’re chasing an oval ball around the field. It’s the kind of error that can happen to any player – even the greats – but it all comes down to how you react to it. Haley reacted superbly. He put Sweetnam away for his try with quick hands and bravery to take a shot on the gain line in doing so. He scored a try himself.

And he helped set the platform for another try with an excellent kick and a better chase.

Haley’s a hard worker, a very solid defender – positionally and physically – and he’s a strong runner of the ball. He showed real resilience here. Great performance.

CJ Stander played incredibly well, I thought, with his work rate and elite test level physicality shining through. He didn’t get a lot of chance to run here but he consistently punished Zebre in the close quarters on both sides of the ball.

I thought Rory Scannell had a super game. His kicking, ball carrying and offloading is really good and the lines he’s running these days are really slick. He’s hitting form at the exact right time.

My top performer was Jack O’Donoghue.

He seems like a guy who’s spent enough time on the treatment table, obviously, but also a guy who’s sick of being forgotten about. He’s been playing for Munster so long you’d forget that O’Donoghue is only 25 and that he’s a former Irish u20 captain AND that he was rated as one of the best talents of his two years at that level. This guy is a serious player. He’s a lineout option on both sides of the throw, he can build a maul and he can carry a ball – something he’s improved on last year and since he’s come back this year.

He’s got class to burn and I think he made a serious case for that #20 jersey against Edinburgh with this all-action performance. Class.