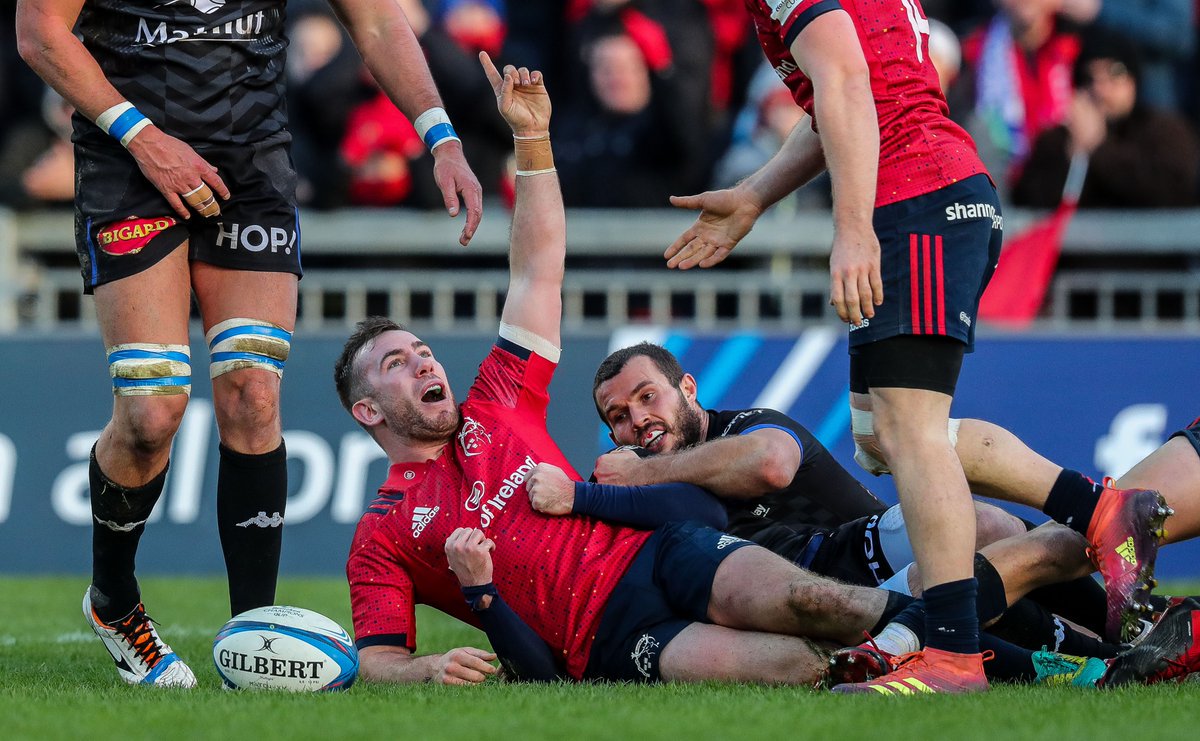 There are two types of people when it comes to this game. Those that were at Thomond Park and/or were aware of the conditions, and those who weren’t and aren’t.

On the TV, it might have looked like a beautiful winter’s afternoon but that doesn’t tell you the whole story – not even close. Around 20 minutes before kick off, Thomond Park was battered by an icy gust of wind and rain that immediately saw players begin to drop passes and add a degree of lottery to any ball passed longer than ten metres. Throw in the loss of Chris Farrell and Joey Carbery before kickoff and the necessary reshuffle those late changes entailed and you have a recipe for a Frustration Burrito served icy cold. That isn’t to say that the Frustration Burrito was lacking in spice – far from it – this was a game with a real edge to it, just not much in the way of fluency.

The reasons for this were two-fold.

1: Castres didn’t have a scrum capable of setting even the most basic platform because Munster were going through it like a chainsaw through a pinata.

The first part – their demolished scrum – will be something that Munster will regret not taking advantage of more given the missed bonus point. The second part – their limited game plan based on denying certain types of transition event and playing the conditions – was quite successful, for the most part, but they were helped along the way by some Munster inaccuracy, especially in the first half.

At halftime, Castres will have been delighted. They were only 6-0 down after giving up 65, 73% territory and multiple Munster 22 entries. Just before the half, Rory Scannell kicked a penalty opportunity dead right before the clock turned red and that just about summed up Munster’s half. An opportunity created but ultimately squandered. I got the feeling during the halftime break that the only people who had anything to fear from a game of rugby breaking out were the French champions but they had their plan and they were sticking to it. Munster, on the other hand, were trying to play with the kind of width that the lack of Farrell at #13 necessitated but everything was just a hair off where it needed to be.

Kicks went out on the full or dribbled dead. Passes floated away from the target. Lineout calls went long and crooked. When you’re trying to set an edge to pull poor defensive decisions out of this Castres side, you need to be more accurate than that.

The second half saw Munster come out strongly, with some clever work on the flanks by Andrew Conway forcing a poor exit out of Spedding. That ultimately ended in a Munster scrum, which Scannell would convert after a strong carry from Stander.

This was a defensive error from Castres – they overfolded after Stander’s carry and left one defender defending 15m of space. Murray spotted the overload and drew out the space for Scannell to finish. Even at that point, 13-0 seemed like a lead that Munster wouldn’t surrender. After copperfastening the game out to more than two scores thanks to a penalty from the faultless boot of Hanrahan, Munster essentially had 20 minutes to find three tries.

The second would arrive after some more clever kicking down the flank by Andrew Conway.

Castres would exit poorly from that lineout and, from the resulting Munster lineout and seven good phases, Murray would attack Castres’ C defence and put Stander away for Munster’s second with 13 minutes left for a third and fourth.

Arnold’s initial offload to Scannell and the support line from Mathewson well in front of the ball from the last ruck were the highlights for me on this piece, as was Hanrahan’s excellent support line.

After that a bit of a schmozzle broke out with Castres replacement lock Samson getting into it with some Munster players on the ground after the kick which chewed up vital seconds.

Munster couldn’t get possession back for the remaining three minutes. After Castres broke free from a maul – Munster will argue that it should have been called to “use” a good 10 seconds prior – Andrew Conway saw yellow for marginal contact on Rory Kockott prior to having a pass hopped off his forehead. It was a little fortunate for Castres to be honest, but it’s hard to argue that there wasn’t contact – however slight – right before Kockott took the pass.

From there, the game dragged out with a farcical route to a Castres 5m scrum.

At that point, Munster needed something special to conjure a bonus point score but it wasn’t the day for that.

Ultimately, the scrappy work and challenging conditions of the first half cost Munster a shot at doing anything other than putting a heavy, non-bonus point victory on a Castres side who showed less rugby than the minis running around at halftime.

That’ll do for Castres but Munster will think about what might have been. We definitely missed the ball carrying of Jean Kleyn and Chris Farrell in particular but the quality of the tries scored will please Van Graan and Jones from a handling and support line point of view.

The Southern Legion return to the top of the Pool with their destiny very much in their own hands. A win next week would go a long way to all but secure qualification before the year is out. Munster won’t want for motivation in that regard, but the needle going from game to game won’t hurt either, as the feisty exchanges throughout this game showed. If Castres play like this next, Munster will win. Only then will this week’s virtual no-show prove to be wise or not.

I thought Tadhg Beirne had another good game here, with his usual crucial breakdown steals and some good carrying. A few handling errors in the first half blotted his copybook a small bit but he’s a real Rolls Royce of a player.

I thought Peter O’Mahony was unlucky not to have a bigger impact on this game towards the end as I felt the maul leading to the Conway yellow card had been sufficiently stalled by his work through the front and the penalty awarded against him a few minutes prior had been done so incorrectly.

For me, he never changes his bind here and, as such, is legal on the ball. He was abrasive and excellent in the lineout, as per usual.

CJ Stander had a really physical game in the ways you might expect – defence, rucking, carrying – but his work with the ball in hand and some of his positioning on kick transitions was really interesting, as were his support lines. A really good performance.

The starting front row was really, really good. They gobbled the Castres set piece up and Castres only got parity as the trio of Scannell, Ryan and Kilcoyne began to tire. Powerful.

Conor Murray had a class return to European rugby and his two assists are testament to that. He’s a bit off his very best – there were some iffy moments with his passing – but he’s got levels and levels to go yet.

JJ Hanrahan came in at relative late notice and performed extremely well, especially from the tee. His try showed all the creative support running that we were used to seeing from him three or four years ago and his kicking from hand was mostly very good. An encouraging display.