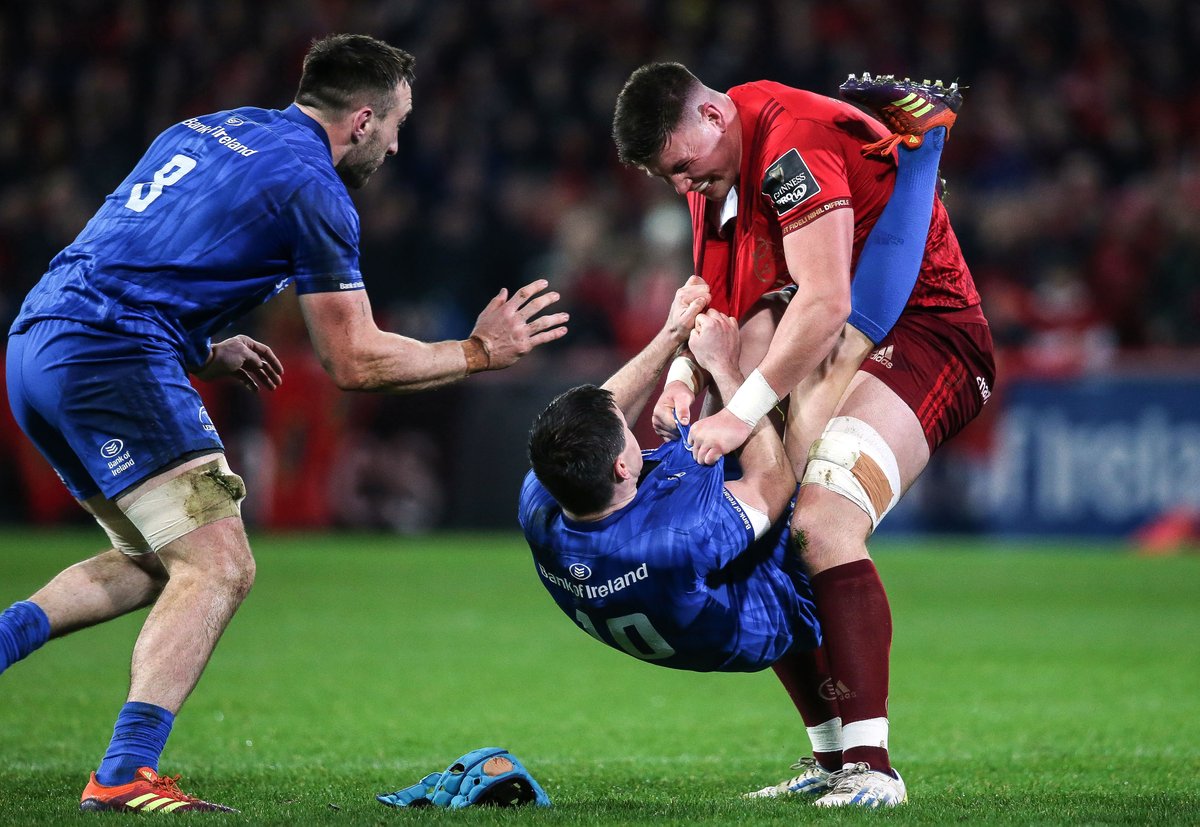 I thought these games were supposed to have lost their “edge”?

If so, no one told Munster. Or Leinster, for that matter. This was as physical and testy a game of rugby as I’ve seen in some time. It was the kind of game that made a fool of the many, many pundits who felt that y’know, Munster vs Leinster games have just lost something. If that “something” was two yellow cards, a red card and more handbags than Brown Thomas then they found that “something” here. This game started ugly, stayed ugly, with a small outbreak of rugby somewhere at the tail end. Of that little bit of rugby, Munster just about edged it. Leinster had more possession and territory in both halves – a byproduct of their natural game regardless – but they really dialled in their possession game during their yellow sin bin periods and their red sin bin period from 31 minutes on.

That initial period of crazy Leinster indiscipline was the prominent factor in this game.

It all seemed to stem from this incident between Fineen Wycherley and Johnny Sexton.

I know Johnny doesn’t like being tackled – who does? – but his reaction to a fairly tame shot that that didn’t finish with anything malicious and was only a hair late on a fairly typical inside ball run seemed out of place. Johnny’s had a good year, I get it, but blindside flankers are still allowed to tackle the opposition flyhalf.

Wycherley’s reaction to Leinster’s captain and tone setter – that of a frustrated man angrily hauling a newly broken vacuum cleaner up off a dirty carpet – seemed to unsettle Leinster into losing their discipline.

They had two yellows and a red but it could have been two reds and a yellow. Either way, it was all very un-Leinster like. They’ve got a hard edge, yeah, but this was thick stuff. Maybe they’d lost the head collectively. Maybe they’d been emboldened by the lack of cards the previous week. But whatever it was, it took away their ability to compete on equal terms for much of this game.

And look, I’m all for a bit of rough and tumble on the rugby pitch. It’s all I was good at whenever I laced up a pair of boots, in fairness, so I know that in derby games you go out there to leave a mark on the opposition. You try to “keep it in the pants” so to speak, but you want them to remember you after the game, just not for the rest of their life, if that makes sense. Hand out bruises, not broken necks, essentially. Some of the shots going in here were b-r-u-t-a-l.

This was practically a full strength Munster XV going toe to toe with a Leinster side that featured Tadhg Furlong, Cian Healy, James Ryan, Scott Fardy, Josh Van Der Flier, Jack Conan, Luke McGrath, Johnny Sexton, Garry Ringrose, Jordan Larmour and James Lowe. This wasn’t a “shadow” Leinster side, as if they do those anyway with their strength and depth. This was two traditional rivals knocking several shades of the proverbial out of each other with bad intentions.

Which is fine, but you have to draw the line somewhere. Have a little scrap. Go on, why not? The odd high shot is fine too, we’ve all seen them. But when it comes to three in quick succession, Cian Healy goes for a 10 minute sit down. When Tadhg Furlong cracked Cloete on the head recklessly (however unintentionally), he saw yellow too. Then James Lowe took out Conway in the air and it was a red card. Much was made of Frank Murphy’s place of birth and playing history before, during and after the game but Ross O’Carroll Kelly could have been refereeing and he would be hard-pressed to not hand out similar sanctions.

In the end, Munster won. Johann Van Graan praised Munster’s discipline after the match and he was right to do so – this was a game that would be easy for Munster to get into tit for tat stuff. Do that though, and you risk going down a man against the best club side in Europe. Castres tried similar provocations and when Munster didn’t react, they were said to have “lost” the forward battle. Stay calm and win, and it’s a different story. It’s amazing what that W will do for your prospects. Lose – like in Castres – and you’re soft. Win – like here – and you stayed calm in the face of physical provocation. It was ever thus.

Of the actual rugby, I thought Munster played a pretty pragmatic game. When they had the opportunity to take three points, even against 13 and 14 men, they took them and landed them. Why? I think because they realised that losing a winger is probably the handiest player to lose for the game if you have to lose anyone. A team as good as Leinster can mostly play the same way – as they did for nearly 50 minutes here – without a winger so playing loose would more than likely see you punished, as many teams have been in the past and will be again. So Munster chipped away. Three points, three points, three points and, just like that, Munster were two scores ahead. They’d stay there as the clock ticked away and then secure the win off an intercept try from Keith Earls in the 71st minute.

The scoreboard added an extra five the second it touched his hands. Leinster could have had motorbikes and they wouldn’t have caught the Moyross Express on this one. Leinster added a consolation try at the death but there would be no bonus point in defeat.

Much was made of Munster’s inability to score a bonus point try against 14 men and while I can add that our attacking work on phase play looks a little nervous and over thought at times, taking the three points when you have them in front of you is the respect you pay to a side of Leinster’s calibre. If you want an illustration of their quality – and game plan – you’ll note how effective they were without Lowe for all but the finishing touches of their phase play. Without Lowe’s ball carrying threat, Munster were able to live with Leinster’s phase play in the middle of the field and clean up any defensive slips in midfield with some good scrambling, big defensive stops and this bit of classic fullback on fullback defensive work from Mike Haley.

This was my defensive play of the day – and it was badly needed at the time with the game in the balance. Leinster are always dangerous and being down a winger means little or nothing to how they want to play for the most part. Against a side that good, you take the three points when it’s on offer and leave the question marks for the review.

This win marks a calendar year unbeaten in Thomond Park, moves us to within two points of Glasgow and gives us a much-needed win over Leinster. It had been a while. Nobody in red will be kidding themselves though – if we’re to beat Leinster again this season we’ll have to be much better than we were here. More accurate, more clinical and less skittish once the ball hits the midfield. Connacht will test those issues to the fullest in the next round, believe it. But for now? Any colour of win is good against the Double Champions.

This was a pretty decent performance overall.

I thought Joey Carbery didn’t have much ball to work with but he did well with what he got and landed all his kicks under pressure. His conversion for the first try was the pick of the lot and put him in good stead for the rest of the game. A good display.

Tadhg Beirne had another super game. Tackles, good carries, excellent lineout work and his usual steals at the breakdown.

He’s a game changer. A mighty day out for the big man against quality direct opposition.

CJ Stander had a hugely effective night here. He made 17 tackles and made 13 carries into the hardest centre-field defence in Europe. He managed the game excellently from a tactical perspective, too. Good stuff.

Mike Haley had a really good game here. His positioning was excellent, as was his high fielding and exits. His tackle on Larmour was a match winner in its own right. He showed how good his defensive fundamentals are in this one.

Fineen Wycherley. Man, what a good night out for the Bantry Goliath. His aggression on Sexton in the first two minutes set the tone for the rest of the Munster pack. Basically, if that lad – just turned 21 on the 11th of December – was willing to step up to a guy like Sexton, then the rest had better match him.

That’s what you want from your young forwards – no fear, no respect, melt everyone in your channel. He stood up to every shot that came his way afterwards and was a crucial part of the first try, a reliable lineout option, and a big hitter in defence. He’s a real, exciting talent.