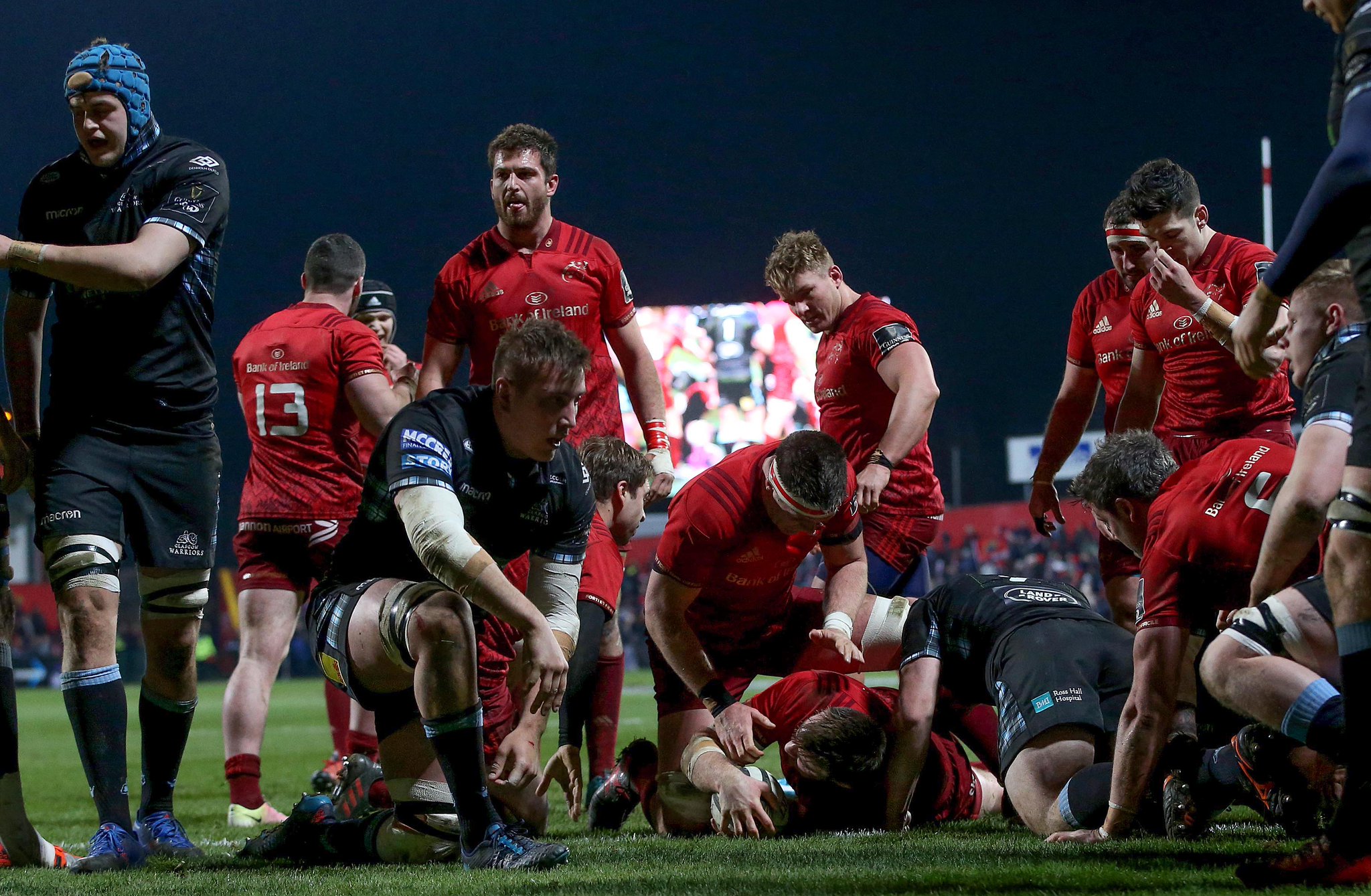 This win against Glasgow in Cork won’t seem all that significant on first viewing. It was during the test window, Glasgow were missing a lot of their go-to guys, and it was certainly scrappy at times but after last week’s mess in Cardiff, this win showed a lot about the qualities of the squad.

You don’t have to like Glasgow to acknowledge that their inherent quality and attacking style runs deep in their squad regardless of the names and they showed that quality in patches here, especially in the start of the second half where they quickly ate away at Munster’s hard-won first-half lead in just 7 minutes. A side like Glasgow can turn 13-0 into 13-10 without much hassle and from there, Munster showed the kind of guts that we always knew we’d need here.

The angrier you are as a fan, the more that phrases like “winning through adversity” will wind you up. To the Angry Fan, winning is something that just “happens” and, when it doesn’t happen, or doesn’t happen easily, then the natural response is to disparage a result like this. The idea that “surely Munster should be sticking an easy bonus point on Glasgow during the test window” is an idea that endures in part because of a lingering hodge-podge of nostalgia, misplaced hubris and a misunderstanding of context.

This block of games was vitally important to our new head coach in assessing the options that he had available to him. In the last three games, we’ve had three different half-back combinations, two different midfield combinations, a different back three every week, three different pack combos and internationals popping back in from Carton House with game time needs. Does that sound like a recipe for cohesive attacking rugby? Does it sound like a way to rock up and blow a Dave Rennie coached team out of the water? If your answer to those questions is “yes” then please move your mouse to the X tab at the top your browser and go to your nearest silly boy forum to find your angry brothers and sisters in arms. If Johann Van Graan is to take stock of the depth he has in this squad, then it’ll have to be seen out in the pitch with all the risks that come with that.

This game, with 12 changes, and played in a freezing Musgrave Park that had wind conditions that ranged from breezy to “gale in a fridge freezer”, was always going to be a real gut check for this squad and it’s a gut check that they passed, I think. This was a real scrap, in tough conditions, and with the added fire of genuine needle bubbling under the surface.

Our attack lacked the fluency that the selection disruption will have naturally lead to but the nature of Munster’s defence in this game really stood out to me.

Outside a bitty seven or eight minutes at the start of the second half, where a slipped tackle off a restart gave Glasgow their opening score from the tee and a missed tackle off a lineout lead to their first try, I thought Munster defended quite well.

When you consider that those missed tackles were made by two injured players, you can understand how they happened. I’m talking about Chris Cloete injuring his forearm;

and Niall Scannell, who had been down for extensive treatment before halftime and taken off directly after this break, slipping off a tackle off the restart;

Bar those two incidents, which Glasgow took advantage of, I thought Munster defended quite well. There was bravery in the tackle, yes, but the intelligence of our defensive work on Glasgow’s set-up phases was the most satisfying thing for me.

Glasgow like to retain the ball in narrow forward pods before spreading the play to their running 10 on a quick ball phase. To combat that, Munster would have to deny Glasgow that quick ball narrow phase by going man for man in the tackle and avoiding getting dragged into the ruck.

The bulk of Glasgow’s forwards are clustered in a narrow pattern around the middle of the pitch and they’re looking to generate a break off a bad Munster fold or more than two Munster defenders getting snagged into a ruck.

Our man for man tackling was really good in those narrow exchanges.

We also had good separation between the ruck and our defensive line to guard against scrum half breaks and close in-fringe carries; 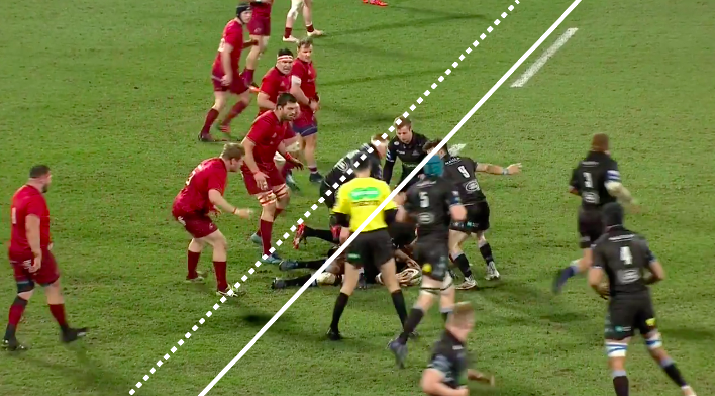 The key to defending Glasgow is matching their narrow carries, realising when they’re setting up for that quick phase, and then attacking that phase.

When we did that, we were rewarded with penalties for Cloete and Copeland.

Guarding the pass out to the 10 is the next step to that defensive effort, and we were quite good in this aspect too.

Arnold, Bleyendaal and Goggin lead the defensive charge here once the ball comes out and even with Bleyendaal’s slip, we’re able to recover, choke Glasgow up and win the turnover.

We blitzed well, were very physical in contact and consistently hurt Glasgow in defence.

Whatever about anything else, it’ll be this aspect of the Munster performance that will please the coaching staff the most, I feel. There were real guts on display here for those that care to look, and the manner in which we broke down Glasgow’s attack bodes well for our prospects going forward in this Conference and beyond.

We didn’t have a lot of attacking fluency, we had a little too many errors on our possession, but overall it was much improved from last week and showed a lot of the qualities that will make the basis of a successful season if, indeed, we are to be successful. Denying Glasgow anything from this game sent the right message.

As per usual, players are rated based on their time on the pitch, if they were playing notably out of position, and on the overall curve of the team performance. I didn’t rate Gerbrandt Grobler, Brian Scott, Darren Sweetnam, Duncan Williams and Ian Keatley due to being on the pitch for less than 15 minutes.

It wasn’t really a day for the outside backs. None of these lads played badly, but they weren’t able to get into the game as they’d have liked.

Calvin Nash had a bit of a mixed bag. One or two small little errors blotted his copybook but he made some good impact too – his chase and hit off the restart set the table for Cronin’s try in the second half. He looks like a guy who’s got all the tools to be a really big deal.

Simon Zebo didn’t have the kind of game he would have wanted in his last Cork appearance but that’s mainly down to the lack of attacking fluency we had on our possession. He got a great reception before and after the game. I was delighted to see him playing in Cork one last time.

Sam Arnold and Dan Goggin did an awful lot of work on the defensive blitz but didn’t really get much to work with in attack. Both are hugely exciting young midfield talents. Alex Wootton looked like a guy who’s relishing his position as a “senior pro in waiting”. He didn’t get much to work with the ball in hand, but his work on stopping a certain Glasgow try was vital.

Tyler Bleyendaal missed a few tackles that he’ll want back but this was a decent start back for the General. He made the right decision more often than not and was fairly good off the tee. He looked a little rusty for sure, but the class was there to see.

The starting pack were outstanding, I thought.

James Cronin, Dave Kilcoyne and Stephen Archer got through a mountain of varied work in this one. The scrum wasn’t as big an advantage as I’d expected but they worked incredibly hard at the ruck and in defence. Cronin was particularly impressive. His defensive work-rate, alertness for his try and ability to play a little off turnover ball was a reminder of the quality this guy has.

Niall Scannell and Rhys Marshall showed the variation that they give Munster. Scannell was a brute in the tight exchanges and had a good throwing display. Marshall made a key impact when he came on too. His alertness at the ruck lead directly to Cronin’s try and he made three or four excellent defensive reads.

Jean Kleyn and Billy Holland made a huge impact on this game without the ball. Both men powdered Glasgow in contact and were a big part of Munster’s dominant maul.

Robin Copeland and Dave O’Callaghan are out of contract this summer and they both played like fellas who were looking to make a statement. Copeland was really physical off the back of the scrum and at the breakdown, while O’Callaghan tackled himself into the ground. A really good display.

I thought Jack O’Donoghue brought great energy off the bench when he replaced Cloete. He made two big carries and was physical and intelligent in defence. Exactly the kind of performance he needed after a week in Carton House.

James Hart had a good game here too. He looked assured in his decision making and execution from hand and boot. He’s got a lot of ground to make up when it comes to possible Champions Cup game time on the bench, but this is the kind of display that’ll give him every chance.

Chris Cloete was borderline unplayable here. Unfortunately, a broken forearm ended his night prematurely but up until then, he was an absolute nightmare for Glasgow. He was clamping over every other breakdown, drawing Glasgow cleaner and killing their attempts at quick phase ball. It was another big night for the Gun Show in Cork and hopefully, he’ll be back sooner rather than later.

I’ll have a detailed analysis of this game on TRK Premium this week. You can get access for just €2 a month.