By Tom Savage7 min read
It would have been relatively easy for Munster to let a game like this slip when you think about it. Sure, you want to win every game, of course, but this fixture was set up to be a real banana skin. Thirteen changes with a rake of young lads and squad players getting minutes going up against a Benetton side that have lost all around them since the start of the season but who travelled with a smattering of former and current internationals in their matchday squad?

Benetton are better than their results suggest, I’ve blown on about that all season. I think their first try here showed what they are capable of at their best, as an example, but the failings that have bedevilled them all season long showed up in the wash here again. I spoke before the game about their tendency to concede tries late in the first half and in the last quarter and, well, just look at when Munster scored.

Benetton were quite decent for the most part. They were bloody physical at the breakdown, for a start, and when they got the offloading game they’ve been trying to play all season long, it was as tough to defend as it always was.

I mean, that’s just a very nicely put together try. You can question some of Munster’s defence here – and it was a bit below the standard we’ve seen in a season that saw us put down the best defensive record in the regular season from a points and tries conceded perspective – but it’s an example of what Benetton have tried to do if nothing else.

How would a youthful Munster selection respond? With some sharp attacking play in transition. Keep an eye on Ahern here – showing good attacking instincts on the run back – but I really like Hanrahan’s pass to McHenry to the edge and Coombes aggressive running once he takes possession.

The high tackle on Scannell gave Munster a kickable penalty that Hanrahan duly converted. Munster were off to the races and started to click offensively. Some of it was conventional, some of it… wasn’t. This sequence, for example. The first progression across the pitch is a 3-2 shape with a lot of width.

Scannell’s wide slinger to Coombes is pretty accurate here and the overall concept is successful in creating a wide ruck position. You’ve probably seen this shape a few times this season and it works because Scannell has a good wide sling pass off his left side. Once we win that wide ruck, we set up for the next phase and… look at it.

That’s not a regular wide pod. Yes, we’re in 1-3-3-1 on this progression but the behaviour of that second pod of three forwards is really unusual in that it stacks the forwards in a triangular shape with O’Connor acting as a handler to get Hanrahan away.

That creates a scenario where Munster would be happy to work with; O’Donoghue attacking space on the wing with a winger on his outside. He didn’t find the pass in this instance but it was the stack of forwards that created the opportunity – along with the looping support lines of Coombes and Scannell as the play progressed that interested me.

Look for the same principle on Ben Healy’s try;

That stacked “pyramid” pod really unhinges the edge of the Benetton defence and puts Ben Healy into position to make a pass to Coombes for the wide break.

Ahern runs an option line that then turns into a deep support line after the break but the pyramid plays two roles in that the three-man shape compresses a significant chunk of the Benetton line laterally while the depth it almost suddenly provides takes Ben Healy away from the blitzing range of the defence. 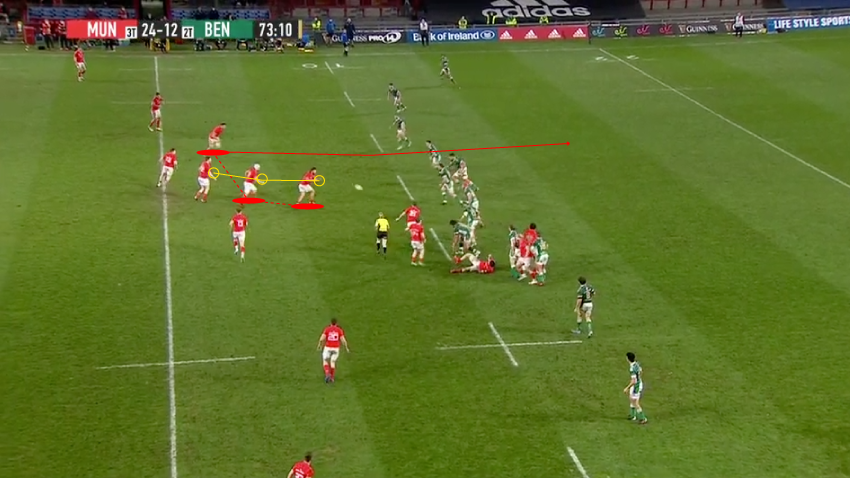 From there, it’s a “let the players make plays” situation with the challenge falling on Ben Healy to make the pass to where the space has presented itself, with the options cascading through after the break.

That is an interesting little twist on “structure” that creates a new picture for players to exploit.

We mixed that up well with an excellently run set-piece and, of course, the kind of close-range power that every team needs. When Roman Salanoa and Keynan Knox get into that 5m zone, they take some stopping, but we’ve been strong in this area of the field all season long.

This was a good continuance of that trend. The overall performance was far from perfect but the value in a squad full of young Munster players putting a relatively straightforward bonus point on a Benetton side that took us to the 80th+ minute back in January shouldn’t be overlooked as just a thing. I think it’s an illustration of the depth that we have tried to build, not just this season, but over the course of the last two or three years.

I liked what I saw from this heavily rotated Munster selection and I think the calm way they dispatched this Benetton side is of much more value than it might seem on paper.

This was a really good performance from Rory Scannell. Sure, there were a few defensive dips late in the game but I thought he really thrived in the first 50 minutes outside Hanrahan and as a hinge player inside Jake Flannery. His assist for McHenry was a real highlight.

He takes three defenders out here – that pump fake pulls out Allan and his offload was perfectly timed with the defensive contact so that all McHenry had to do was run a good, aggressive line to make the finish. I thought Scannell’s role balance in this game was really good because the presence of Flannery as a wider passing/strike threat smoothed out Rory’s role and allowed him to do more of what I think he’s really good at. Very nice stuff.

Jake Flannery had a very strong first start for Munster where he showcased a lot of his strengths as a playmaker. He threw some nice flowing passes and looked really comfortable in that wide playmaker role. Very encouraging.

JJ Hanrahan and Ben Healy also showed well during their time on the field and ran our attacking progressions quite well, I thought. Healy’s try, and the build-up to it, was extremely well-executed while JJ Hanrahan’s calm management and excellent passing – seriously good – was a constant highlight.

Liam Coombes monster on-ball involvements are a direct result of the excellent facilitation and playmaking going on at #10, #12 and #15. At 6’3″ and with a big frame, Coombes is a guy who I think had “power winger” role potential given his pace and the variety in his skillset. His big challenge here would be making the most out of his involvements when they came his way and I think he did a really good job; powerful runs on transition, strong work in contact and good hands when he was called on to pass.

Jack O’Donoghue showed his value again here with a tough, veteran performance that was a real benefit to the young talent dotted all around him. He just does everything really, really well and he’s perfectly dialled into his roleset in our wider attacking scheme. He’s an invaluable player to have in the squad.

Jack O’Sullivan had a really hard working game here as a primary ball carrier. He overplayed on a few of those carries but he worked his arse off all over the field in every facet of the game. I still feel that he’s waiting for a big, standout performance but this was an example of his work-rate and the balance in his skillset.

The best thing I can think to say about Cian Hurley after this performance is that he didn’t look like a 20-year-old NTS player – not even officially on an academy deal – making his first senior start in the second row. I mean, he played 80 minutes here on his debut in an incredibly demanding role. Whatever you say about Benetton – or any Italian pack – they do not do soft front five forwards. Hurley scrummaged on the tighthead side of the scrum and worked his arse off in the tight exchanges against some big, powerful men. Eli Snyman, for example, is off to Leicester Tigers next season – they love soft front five forwards there, after all – so this performance in the tight from Hurley really stands up to scrutiny.

This was an aggressive, physical display from the latest addition to the West Cork Mafia.

He was joined by another incredibly complete performance by Thomas Ahern. He called an excellent lineout, carried strongly and showed the kind of pace and movement that you don’t usually associate with a second row player.

The fact that all of this is wrapped up in a 6’9″ frame with a wingspan wider than the Sarsfield Bridge is even more remarkable. Ahern is showing the kind of completeness to his game in the second row that belies his youth, relative inexperience and the fact that he was a fullback up until 2017. With a bit of luck with injury, Ahern has the capacity to reach heights not seen in Munster since a certain red-haired demon broke through in the early 2000s. I don’t say that lightly. They are different types of players, for sure, but the completeness of Ahern’s game at just 21 years of age is remarkable. He had one or two slipped tackles here – happens to everyone – but it was his work in the tight exchanges and set-piece that stood out to me. Excellent stuff. ★★★★★