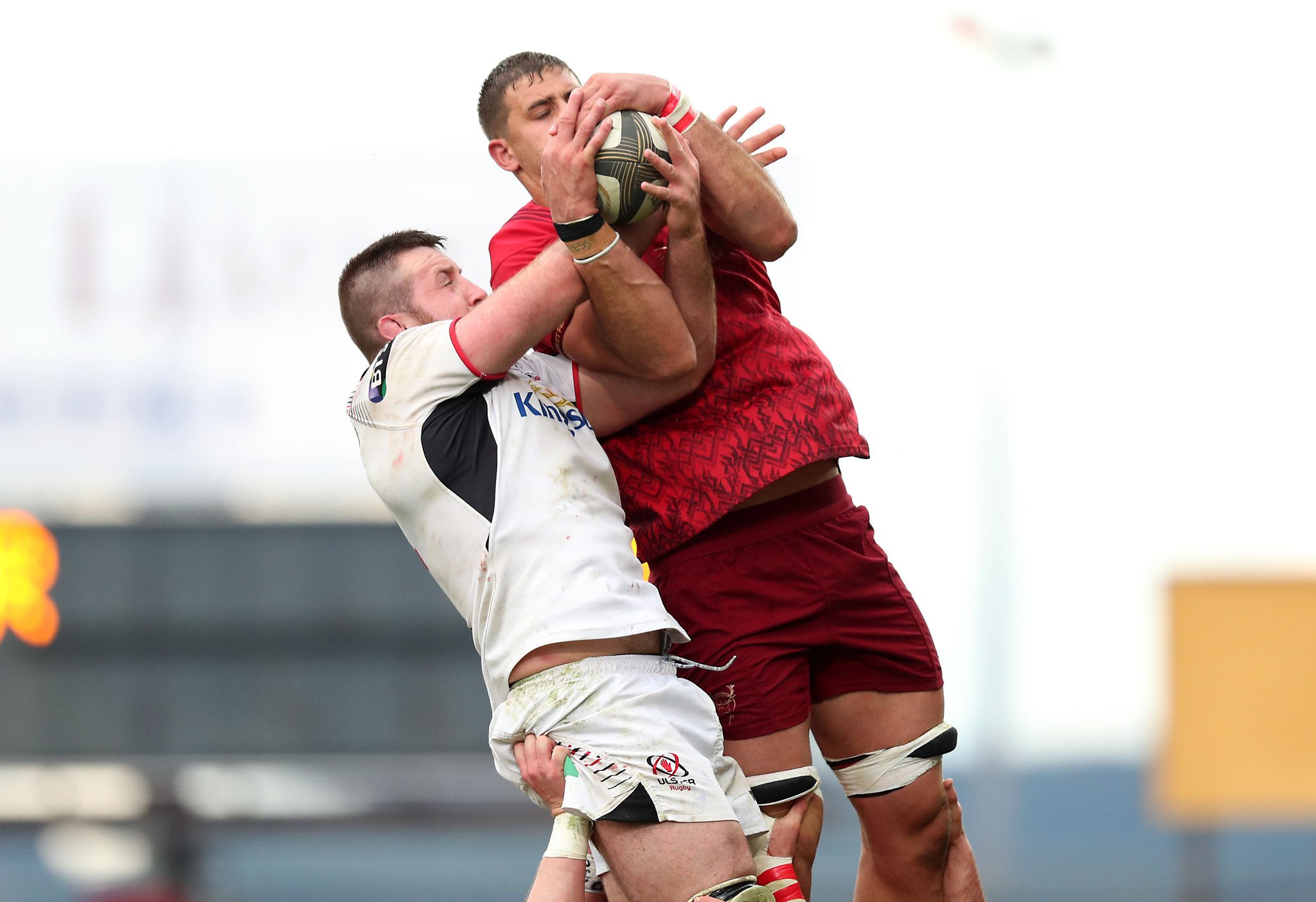 You know how they say that draws are like “kissing your sister”?

I never got that phrase or the people that wheel it out. Why are you kissing your sister? Why are you telling us about it? Does so much sister kissing happen where you come from that the metaphor rings true? It just doesn’t make sense to me.

Ulster came into this game as full strength as injury and personal medical issues would allow. Munster, on the other hand, gave a lot of squad guys a run with instructions to make Johann Van Graan’s life difficult over the next three weeks. In that context – and the 10 point halftime deficit –  a draw isn’t the worst result, given what we needed from this game (nothing) and what Ulster needed (a bonus point win).

This was an odd game. Having watched it back three times now, I see two teams who were quite evenly matched in most of everything they did. Neither side’s halfbacks managed to exert much control or pattern on the game outside of some individual moments of skill and grit. Both packs had distinct purple patches depending on personnel, phase play and set piece. Given how the third and fourth quarter went, Munster might even be a little disappointed that they couldn’t overtake Ulster decisively but our use of possession was a little inefficient at key points and actively hindered our first half performance.

Tactically, I thought Munster started the game quite well. Hanrahan and others put pressure on the Ulster exit and the first try came directly from squeezing Shanahan as he prepped to bail out to McPhillips. Munster’s second try came directly from another blown exit with Darren Sweetnam scorching through Ulster’s transition defence before good work saw Scott power over a few phases later.

When Munster took our initial 7-0 lead, we looked like we had a good platform to build phases on an Ulster side that was showing a little frailty in defence that has characterised a lot of their season. Munster started to move the ball around with a bit of width and pace, and that exposed space on Ulster’s edges.

So far so good. There’s some good long ranging passing in the above GIF and we’re sending runners into space. Then we coughed up the ball on a big openside play in the direct aftermath of this phase and Ulster capitalised.

JJ will take the heat for this – it was his spill – but his attacking pocket fell away after he took possession and we seemed to lose our place – was this a pullback play to Goggin with O’Callaghan and Grobler screening? Perhaps, but either way, it lead directly to Ulster’s levelling score.

If I was to describe Ulster’s first-half from here, I can’t really do it without talking about the initial advantage they had in the scrum. It won them kickable penalties on both sides of the put-in and put Munster’s offensive scrum under unfamiliar pressure.

A lot of that came down to putting Iain Henderson’s power through Rory Best onto Mike Sherry. This example is fairly typical of Ulster’s scrummaging when Henderson was on the pitch.

When Henderson limped off on 22 minutes, Ulster’s scrum lost its dominance and only found it again during Copeland’s sin-bin, where Darren Sweetnam was packing down on the loosehead side.

When Ulster won penalties they, as you’d expect, went down the line with regularity. We defended the maul quite well initially but I felt we were a bit off with the numbers we’d put in – and eventually it lead to a yellow card for Copeland.

In this instance, I’d have like to see O’Shea get in on this 8-6 maul a little sooner because when he did make his entry, Ulster already had that crucial initial momentum. When Ulster went with a full 8 man maul, they were able to peel off Munster’s initial pressure and get around the corner for a score.

When we were down to 7 men in the pack, I thought we were a little cavalier with our maul defence numbers. We left three men out of the initial maul exchanges for Ulster’s second try and paid the price.

We left two out of their next 8-man maul a few minutes later and Ulster scored again.

At that point, at 10 points up and with three tries in the bag, there was a real sense of Ulster momentum albeit, checked by a wonder if their scrum dominance and mauling advantage would handle the bench transition as the game wore on.

Munster brought on Archer at halftime and the scrum – almost immediately – began to show clear dominance on our own put-in.

Then Kleyn and O’Donoghue came on and the maul began to follow suit.

Now Munster were rolling. A try followed soon after this maul and all the energy was Munster’s. Ulster were unable to get the field position and penalties from the scrum that had seen them gain the upper hand in the first half and any opportunity they had to attack through the lineout was thoroghly wrecked by Gerbrandt Grobler and Dave O’Callaghan.

That inability to launch anything of substance from the lineout saw Ulster pinned into their own territory for large periods. That Munster couldn’t find the space to take advantage of the space Ulster ceded during the third and fourth quarter will be a source of concern.

Sometimes the margins in our attack were small – a pass going slightly astray, a ball not falling onto a foot for a kick through – but for large stretches of our possession, our structure seemed to fall away and we relied a little too much on long skip passes to get guys into space. I’ll get to that in more detail in the GIF Room this week but that isn’t to say there weren’t nice touches – like this almost-worldie from Arnold to Hart with Fitzgerald in support.

Ulster had a bit of pressure in the last few minutes but I thought Munster handled it competently and defended very well by and large. The context of the situation demanded Ulster go for lineout drives rather than kick a winner but they found their throw and 8-man drive under huge pressure from Grobler and the mauling excellence of Archer and Kleyn.

When Grobler picked off Ulster’s last roll of the dice in the dying minutes, their playoff hopes fizzled out. A different – and more pressured – game awaits them against the Ospreys in two weeks but they’ll be disappointed with how easy they made Edinburgh’s evening. This game showed a lot of what Ulster need to improve on in the short and long-term, but I think the talent is there for them.

This was a decent display overall given the context of the game.

Duncan Williams and JJ Hanrahan were on the bubble of a poor display for me but both had decent moments mixed in with an overall lack of structure. Seeing JJ outside Murray and Williams working with – say – Tyler Bleyendaal would be something to see.

Brian Scott and Darren O’Shea had average games, but I saw enough from them to hint at what might come with extended game time. I think we’ll see that next season.

I thought Calvin Nash, Darren Sweetnam and Stephen Fitzgerald looked really good here and Sweetnam, in particular, can be pleased with his matchup against Jacob Stockdale.

Sam Arnold played like some of the Ulster lads kicked his car before the game. He’s got superb energy and you can see him developing with every game.

Dave O’Callaghan had a superb game on the blindside and was joined by the excellent Gerbrandt Grobler in dismantling the Ulster lineout. Grobler looked like the quality operator we saw in Racing last year and bullied the Ulster set piece.

I’m a huge fan of James Cronin, so seeing him lead the tackle count, carry around the fringes with real menace and add some subtle offloading touches in the contact area was particularly pleasing. The scrum didn’t go well initially but as the front five makeup changed, he became more and more dominant. Superb.

I’ll be covering this game in detail on TRK Premium this week. You can subscribe for just €2 a month.