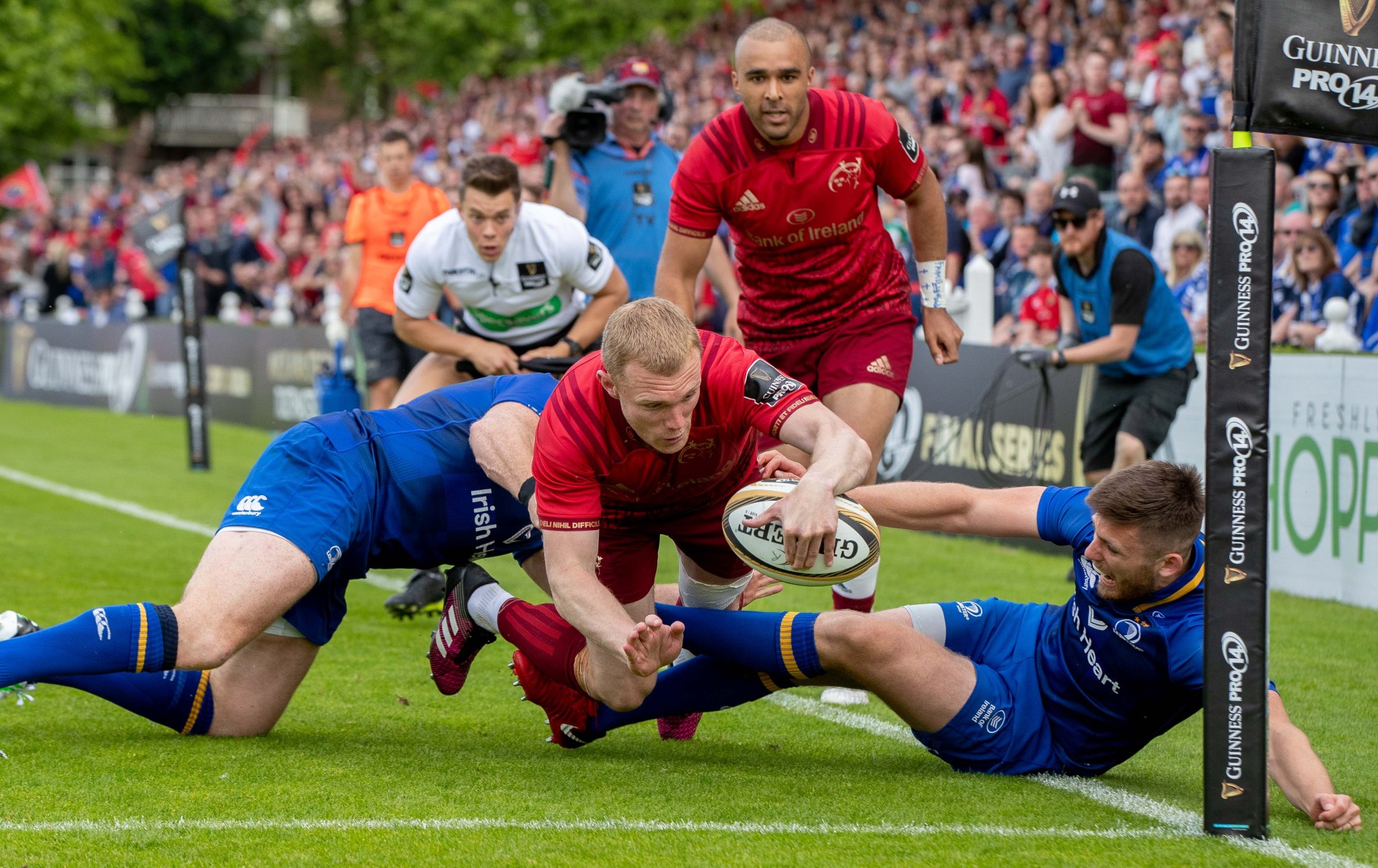 At full time, the scoreboard told a blunt story.

Blunt stories tend to erode nuance away like an electric sander and, while you might not like what they have to say, they always tell you the truth. It doesn’t matter that Munster left this game behind them through a combination of intermittent passing inaccuracy, problems from the tee and indiscipline because, long story short, Munster were just not good enough to get the job done on a blisteringly warm Saturday afternoon in the RDS.

There’s a natural reflex to look at a Leinster teamsheet minus Sexton, Henshaw, Kearney and Leavy and decide that Munster lost to a “shadow side”. I can’t stop you from thinking that but I will tell you that, right now, Leinster aren’t really capable of throwing out a “weakened” team, especially one that has three Lions in the 23, an all international pack and four international forwards on the bench. Playing that side, at home, was always going to be a tough ask. They aren’t the European Champions for nothing and there’s no shame in admitting that they are further along the road than Munster at this point in time.

The gap isn’t insurmountable – in fact, I think it’s closer than most will talk about in the coming days – but there is a gap.

If I was to pick one area of the game where Leinster had a consistent advantage, it would be the regular outlet they got in the wide channels from James Lowe. The forward exchanges up the middle of the pitch were brutal and claustrophobic but Leinster had a powerful, dynamic option to release to.

This ruck sequence should give you a brief illustration of how the defensive picture looked after most carries.

Having Lowe as an outlet allowed Leinster to make gains in the wide areas.

Having a guy that could break this tackle and make another five metres rather than hitting the deck for a numbers-down ruck with Munster swarming was a big difference maker for Leinster in generating field position.

Leinster were also quite effective with their set-piece strike options and Lowe was massively important to here also.

That ability to get around Munster’s heavy centre-position defence was a key point for Leinster and one that played into Lowe’s individual strengths as a power runner. 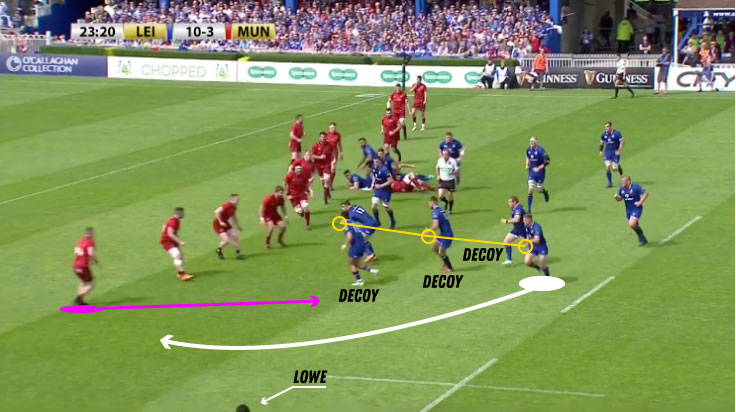 This second phase movement off a lineout was designed to get Larmour around the corner with Lowe as the outlet. Having a power threat like Lowe at the end meant that, even if Conway didn’t step in on Byrne, there’d be a high percentage of a linebreak given that Lowe would have a one on one with 15m of space to work with. He’s a tough guy to get a stop on when he’s got any kind of momentum.

Leinster weren’t half as effective on the other wing and in a game as tight as this game was up the middle of the pitch, having that outlet was significant for them.

Defensively, I thought Munster were really impressive for the vast majority of the game. They more than held their own against an incredibly physical Leinster pack.

We did a good job of meeting them physically but also adding a little clean-out spoiler post-tackle and that allowed Munster to compete, reset and go again with pressure. It was effective, for the most part, and allowed Munster to absorb a lot of the forward midfield impacts that usually breaks teams, especially in the RDS.

Throw in some excellent scrummaging, powerful mauling and you have a Munster pack that was right where it needed to be physically against one of the premier packs in world rugby right now.

That scrum advantage turned Leinster’s way in the third quarter – coinciding with Leinster’s bench transition – until Scannell shored up the pressure coming through on Marshall.

Overall, I think we can be pretty happy with how our work in the tight went. The issues, as far as I’m concerned, were elsewhere.

Our passing and attacking patterns came in for a bit of criticism in this game and it’s fair to say that Munster were very inaccurate at times. That isn’t to say that there weren’t intermittent bouts of good passing movement from Munster;

But those moments were overshadowed by a number of passing errors that killed momentum at important junctures.

Some of those misses were avoidable but I think a lot of our passing issues came with the need to release long passes into space. That seemed to be a knock on effect of the absence of a wide-carrying threat that Jack O’Donoghue, Chris Cloete, Chris Farrell and Jaco Taute give Munster. It isn’t about Sam Arnold – who’s a superb talent that will only get bigger and badder as he develops – it’s about working with what we have on the day.

In Simon Zebo, we have a good long range passer of the ball so it was no surprise to see Munster use him as a primary receiver, and he had the most amount of interactions with the ball of any of our backline – same amount of passes as JJ, two more than Keatley, three kicks and 16 carries.

We were compensating for a lack of massive ball-carrying threats in the outside channels by skipping wide passes to the wings to get around Leinster’s edge and then looking to hit the disrupted space on the reverse. Too often, the passes that went out there weren’t quite good enough.

Physically, we were managing to win collisions upfront but the end product wasn’t there often enough. Throw in a missed penalty, a missed conversion and a few sloppy penalties given away at the other end and you’ve got a performance that fell short by a point on the day. What might have happened on a different day is irrelevant.

We were close, but not close enough to get the win against an excellent Leinster side. The grit, physicality, set-piece muscle and close range grunt we showed was a huge positive but we just didn’t have enough weaponry to get the job done in the end.

This was a decent display in the context of the occasion.

James Cronin and Rhys Marshall were excellent throughout bar a scrummaging dip at the end of their game time. They consistently linked up well in open play and stood up excellently in the opening scrum exchanges.

CJ Stander looked back to his best with a tough nut carrying performance up the middle of the pitch coupled with effective defence when called on.

His aggressive, percussive carrying was the foundation stone for some excellent Munster forward possession that deserved a better reward. We’ve seen CJ play a little wider in the last few weeks but this was a game for the big bulls in the middle. A good display.

Peter O’Mahony had another effective day, with a few excellent possessions in the wide channels and his usual air raid defence in full flow.

I thought JJ Hanrahan and Ian Keatley had mixed outings in either half.

Hanrahan looked sharp in possession and kicked intelligently before going off with an injury at halftime but missed a fairly straightforward penalty for a man of his ability.

Keatley had a more mixed bag. One fairly sloppy penalty conceded off a box kick and a missed conversion blotted his copybook for me but he did move the ball around decently.

It wasn’t all about the flyhalves though. They were joined by a fairly average performance from our backline overall. All of Conway, Earls, Scannell, Arnold, Sweetnam and Zebo had decent moments but the end product wasn’t there on too many occasions.

My stand out performer was – by some distance – John Ryan.

He went up against Leinster’s all-Lion pairing of McGrath and Healy for 73 minutes and more than held his own and even managed a fair bit of dominance in the early going. For a guy who was a doubt pre-game, he more than held up his end – figuratively and literally. An excellent performance under savage pressure and coming back from a back injury.

I’ll be covering the season as a whole with my yearly Anatomy of a Season long-form article as well as areas I feel can be improved next season on TRK Premium this week, which you can assess for just €2 a month.