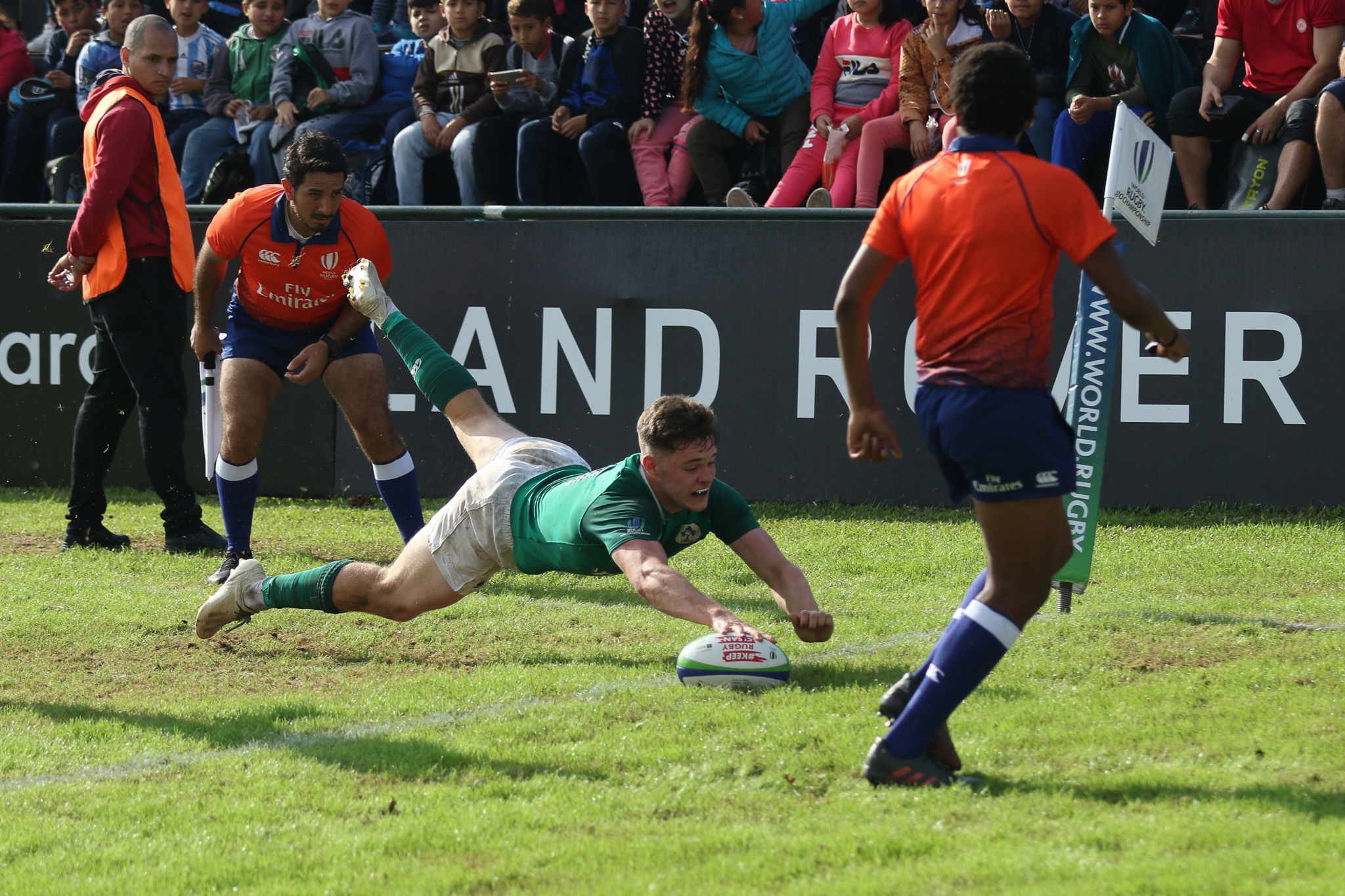 They went out swinging but there won’t be a semi-final place for this Irish U20 side.

It won’t be for the want of trying, or skill, or class, or bravery, but it’ll be another match against England and a knockout series for anything from fifth to eighth place in Rosario for this talented group.

It’s a pity that the congested nature of this u20 Championship – this was Ireland’s third game in eight days – has stripped a lot of players from this Irish group through sheer attrition. Losing the likes of Penny, Hawkshaw, Moloney and Bryne before the tournament was bad enough but losing Hodnett, Moore, French and Hughes over the previous two games and then Booth, Kernohan, Ahern and McCann in this game alone is a whole new level of attrition. The short turnaround between games seems to be a holdover from when the u20 game wasn’t as close to the brutality of senior-level as it is in 2019. Even looking back five years shows a much more open, less physical game than we see today but the schedule remains the same. It’s beginning to take a toll.

Most of the lads that Ireland played against England have pro-experience in the Gallagher Premiership. This Irish side can obviously take them on from a skillset perspective – just look back over the last two meetings – but the physicality extracts a heavy price. Not just in the games themselves but in the quality of the recovery periods between games which can often lead to knock-on injuries down the line.

With a 28 man squad, that’s a tough ask, but this Irish squad have acquitted themselves excellently.

The physical toll of the previous six days meant that much of this Irish side was running on half a tank of diesel coming into this game, even with the rotation McNamara brought to his teamsheet. The likes of Clarkson, Tierney, Ryan, Casey and Wren were rested but most of the other squad members were pressed into action because the depth in the squad just wasn’t there in the aftermath of the previously mentioned injuries.

Not that it was evident looking at the first 35 minutes when Ireland ended the game as a live contest with a display of clinical, physically dominant rugby. Four unanswered tries saw the bonus point wrapped up without much of a fuss and the stage seemed to be set for a points chase but it didn’t quite pan out that way.

Right after Ireland’s bonus point try – and I’ll get to that in a minute – Italy capitalized on a sloppy Irish restart to exert pressure on the Irish maul defence before racking up 18 heavy phases, and earning three penalties before finally scoring a try on 44 minutes. They scored again in the early part of the second half and Ireland only managed a single score thereafter when the likes of Clarkson and Tierney steadied the ship off the bench.

The chase for points never materialised but that shouldn’t take away from this performance.

It was a good win. Let’s not forget that much of this Italian side put England to the pin of their collar a few days ago so this game was far from a “gimme”, far from it. It was Ireland’s endeavour inside the first 10 minutes that just made it look like that.

Thomas Ahern – who looked incredibly impressive up until his withdrawal on the half-hour mark – disrupted an early Italian lineout, Ireland won a penalty and the heavy pressure started from there.

Ireland spent 10 minutes nailing the Italian fringe before eventually scoring the first try but the language barrier wasn’t going to muddle that message – we weren’t here to screw around. Ireland had a job to do and set about doing it directed by the excellent Ben Healy, who showcased the full range of skills you’d want from your flyhalf.

After Ireland’s try, Italy kicked off well and pressured our restart exit with good physicality.

Watch this from Healy.

That is just gold dust. That’s about as good as you can get from a restart without running the length of the field and scoring a try. Booting the ball from just outside your own 5m line to inside the opposition 10m line? That’s outstanding.

Ireland pressured the Italian lineout – as they did all day – and had a penalty a few minutes later that made it 10-0 and we pressed on from there. Another scrappy Italian lineout off a Healy exit led to the second try – a sweeping kick transition sequence off an excellent Reilly kick through, claimed by Kernohan.

The pass from Healy is the killer here. He accurately finds McCann with a 15m pass off his right hand and that opens up the 4-1 isolation that we converted extraordinarily well.

Foley (Green #12) ran a scrumhalf support line ahead of the play after the pass to be right where he needed to be for the offload and finish. It was incredibly well taken.

A third try followed after close range heavy pressure and then, on 38 minutes, Jake Flannery and Ben Healy combined to put Russell away in the corner with outstanding hands and improvisation.

That try provoked an emptying of the Italian bench, which improved the Italians considerably, especially in the scrum. Ireland only properly got a handle on them once Tierney and Clarkson came off the bench.

The excellent Ryan Baird added a fifth for Ireland later in the second half but the chance to chase Australia’s points difference was gone.

Ireland will have a few days to rest and recover before another game against England but they’ve done themselves proud on the strength of their performance in the pool stages so far in my opinion. There are some real players in this group, and I’d expect to be seeing a lot more of them very, very soon beyond the end of this tournament.

A good win against a decent Italian outfit.