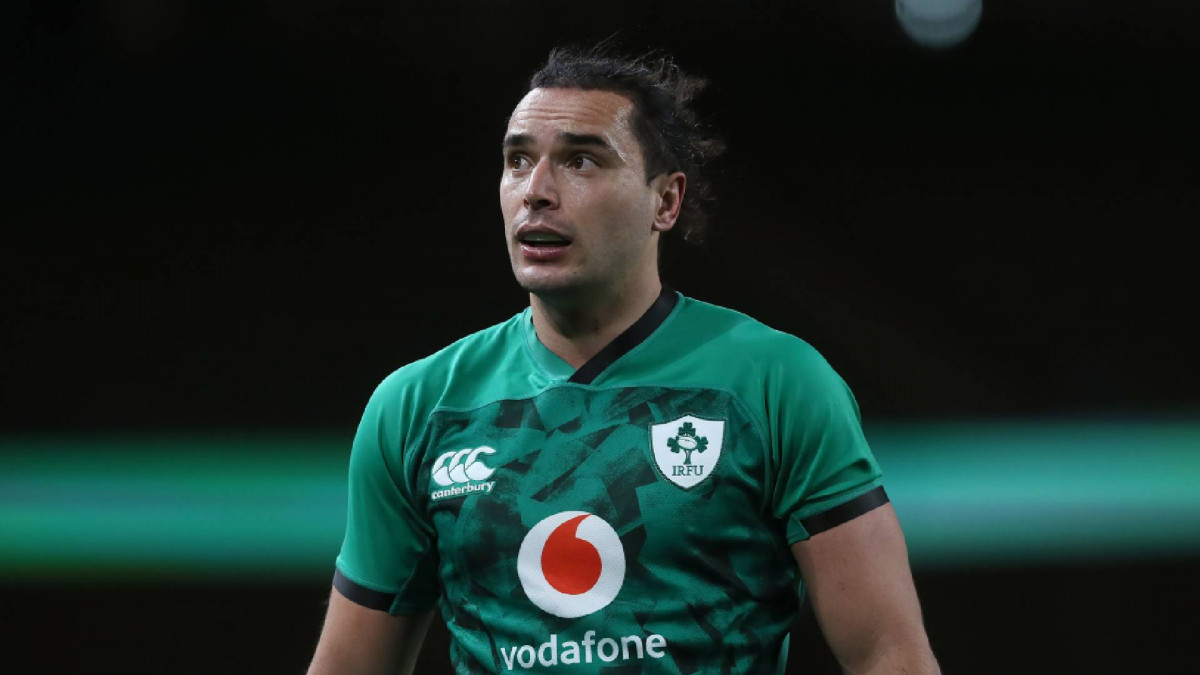 By Tom Savage8 min read
This felt like a statement wi-… wait, no, we’ve been here before, haven’t we? Back in February, Ireland struck a somewhat convincing note over a shop-worn Welsh side at the Aviva before heading to England in the next round for a chastening shot of reality. Then, as now, I was left with the impression that Ireland left more than a few points out on the pitch but it didn’t matter. Why? Because Ireland currently have way too much for this version of Wales. That was true back in February and the same is true ten months later.

While stretches of this game were encouraging from an Irish perspective, the context of the opposition must be taken into consideration, which seems like a bizarre thing to say about a Welsh side that won a Grand Slam in 2019 and were a hair away from a World Cup final this time last year. Yet it’s becoming more and more apparent that something is off with Wales under Pivac and it doesn’t seem as simple as swapping in one player for another or even shifting their attacking structure around to something that more closely resembles the Gatland years.

If I was trying to sum up the two sides in two video clips, it would be these two. Watch this sequence of Irish attack from the first half.

Punchy, accurate and look at the quick ball Gibson-Park has to work with most of the time. With that quick ball and gain line momentum, Ireland unbalanced Wales and progressed up the field to the 5m line. Ireland were winning most of the offensive collisions, producing quick ball most of the time and looking pretty slick as a result but when the ball slowed down – as it often does inside the 5m line – we started to look less impactful.

Tipuric won the ball off a Ryan carry after the good work above and it was an illustration of a problem we won’t properly see until next weekend.

That isn’t to say we didn’t convert all of our chances from close range. Lowe’s late exclamation point was a nice finish off a close-range scrum and Roux’s try was of the same variety. In these close-range situations, you need your heavy ball-carrying rotation to take command with minimal input from the halfback until the opportunity arises. Ireland were always rolling nicely towards the posts here and after Doris’ excellent tight gain, Roux just needed to be accurate with his pickup and the finish would be there.

We had one or two other opportunities like this that, if they had been taken, would have nailed this game shut by halftime.

Wales, on the other hand, were as we expected with the ball in hand once they got their act together slightly during the third quarter. Let’s have a look at the below sequence and compare it to the Irish sequence from earlier.

Slow, no real punch on the ball and their wide rucks are slow which, as we know, is poison to a 3-2-X shape. This progression never really unbalanced Ireland and, as a result, Wales don’t go anywhere on this sequence – the play starts on the 22 and ends on the 22 a minute later.

At the set-piece, I thought Ireland showed some real promise with a tasty series of inside decoy loop plays that bamboozled Wales on a number of occasions.

What do I mean by an inside decoy loop? It’s when you run a loop play – player and ball go one direction before passing back inside to a player running against the defensive drift. These plays are quite common at the moment but the one downfall of the scheme is that defences now leave a free defender floating in the space to guard against this very tactic but Ireland have found a way around this by overloading that free defender with two looping runners.

In the below example, Gibson-Park loops out before passing back inside to two legitimate ball carriers – Kelleher and Lowe.

Elias has to guard Kelleher AND Lowe, picks the wrong option and Gibson-Park can flash the ball across drift to Lowe for a big linebreak.

When you look at Ireland’s first-half set-piece work, this structure was visible inside the first two phases and produced big gains almost every time.

Performed accurately, these schemes can be devastating and the secondary running option on the loop play preserves the space for the runner superbly. Andy Farrell won’t have missed the impact of Chris Farrell as a dominant ball-carrying hitter off the lineout on two occasions in these clips – when you get that kind of go-forward possession combined with quick-ball it makes complex plays easier to perform because the opposition is reacting to you, not the other way around.

On the negative side of the ledger, I think Eddie Jones won’t have missed how many penalties we gave up on long kick transition runbacks in the third quarter.

Wales kicked long to us, stopped our transition runner in a central position and either turned us over on the first ruck or the second because our forward support hadn’t made their way back in time.

Ireland had opportunities to really go after Wales in the last quarter from penalty advantage but chose to kick their penalties instead to seal the win against a Wales side that missed two third-quarter penalties that would have brought them back to within a point. Normally Leigh Halfpenny is a ruthless goal kicker but his two misses (at a range he’s normally excellent at) were a big turning point in the game and Ireland didn’t make the same mistake when it came to pushing the game out of Wales’ reach. Lowe’s last-gasp try put a gloss on the scoreboard that didn’t properly reflect the second half but probably was fair enough when you consider the Irish dominance of the first half.

Like last time, the question has to be whether this kind of performance will be enough against England in Twickenham. This performance? No. We will have to be much more clinical and much more physical against Jones’ England and this current iteration of Wales does not reflect the kind of top-end test challenge that they did previously. That’s a danger for Wales because it’s hard to see where they go from here but it’s also a danger for Ireland if the wrong things are taken from this victory. Don’t get me wrong, this was a good performance against a declining opponent but England are a different proposition.

That was true in February but we didn’t really know it – we can’t make that mistake in November.

The restart has seen the strange spectacle of the pretty quiet James Ryan performance and this game was a continuance of it. Like last time out, he wasn’t poor by any stretch of the imagination but he wasn’t the James Ryan that we’ve come to expect in games like these despite being “freed” from the physical burden of tighthead lock scrummaging. He needs a big one against England.

Quinn Roux, on the other hand, was excellent. He scored a try, yes, but it was his more subtle, brutal contributions that stood out to me. His ruck work and impact around the collision area was superb throughout his 64 minutes.

He also showed the value of having a tighthead lock already built for the role. The pundits who scoffed at the role this time last year when it suited them were awful quiet last night.

Roux powered every inch of his 6’6″, 122kg frame into every scrummage and he played a key role in brutalising Rhys Carre and the Welsh loosehead side for much of the contest. I’d start him next week in the same role.

Peter O’Mahony wasn’t one-bit shy of getting stuck into the action, as you’d expect and he seemed to relish a slight tweak in his defensive positioning. Offensively, he paired up really well with Lowe in the wider channels and, who’d have thunk it, they seemed to complement each other’s skillset really well. This was the performance O’Mahony needed after a frustrating few weeks.

O’Mahony’s new buddy James Lowe had close to the dream debut. He scored a try, beat defenders, kicked strongly and looked very like the player he’s been at Leinster for the last three seasons.

That isn’t to say he was perfect – England will look at one or two bits of his defensive work – but for a guy making his first step up to test level, this was exactly what you’d want bar a bad drop in the first half. He’s got power, pace and the kind of energy that every team needs. Quality.

Caelan Doris had a good, physically imposing game here and it was exactly what was needed to show what he can do in a bigger ball-carrying role and he did that all through the line here. It’s quite likely that Stander will join him in the back row next weekend but this is what we’ll need to see from Doris in the rotation – he was explosive when he needed to be and carried some nasty ball for important gains. This was by far his best performance for Ireland and it’s even more impressive when you consider he’s 22. Next week will be a different, steeper challenge but he was top class here. ★★★★★

Want to know how you’re having a good game as a tighthead prop? You get to see this before a crucial scrum on the opposition’s 5m line right before halftime.

Andrew Porter butchered Rhys Carre here and played a huge role in locking Wales deep in their own half for much of the first half. Porter’s importance to Ireland has absolutely skyrocketed since Furlong’s injury and this performance reflected that importance. His scrummaging was destructive, his lifting sharp and his work around the offensive and defensive breakdown was top class in its accuracy and physicality for the most part. If he keeps playing like this, he’ll tour with the Lions and if he can step it up next week against Ellis Genge and Mako Vunipola, he won’t be far away from the test side. ★★★★★