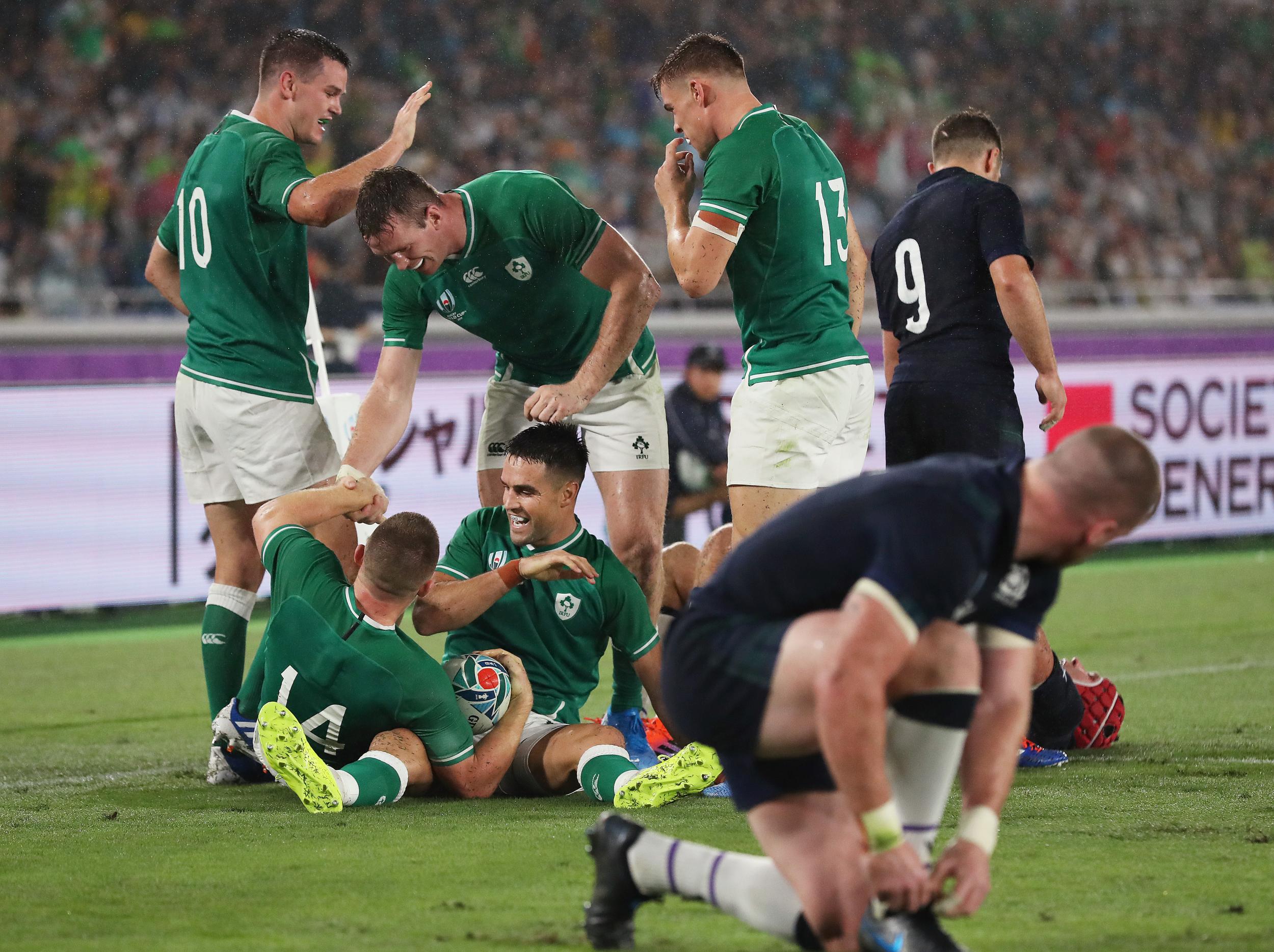 Ireland annihilated the Scottish pack today and, as a result, we won about as comfortably as you could hope to win against another Tier One side. A lot of the debate in the aftermath of this game will focus on whether Ireland were really that good here, or whether we were made to look good by an off-colour Scottish outfit. I think the latter is directly related to the former. Ireland’s approach from the very first minute was focused on attacking key Scottish weaknesses, relentlessly, until they cracked. Ireland didn’t just attack tactical weaknesses – they targeted the Scots conditioning in a systematic, controlled way that left much of the Scottish pack blowing black smoke inside the first 30 minutes.

From “the fittest team going to the World Cup” according to Gregor Townsend to half their pack struggling to get off the floor after a defensive set on the half-hour mark?

Let’s have a look at how we went about breaking down the Scots and winning this Quarter-Final Before The Quarter Final.

Ireland made a deliberate effort not to use box kicking or position kicking in the first three preseason games. There could be a lot of reasons for that but in situations where any team would normally kick, we didn’t, especially against England and away to Wales. In this game, Murray kicked possession away fourteen times by comparison and, in total, Ireland kicked the ball 39 times to Scotland’s 27.

When we look at most of Ireland’s kicks in that first half, they weren’t kicks to contest or kicks to touch, they were kicks to advance position, generate transition opportunities and attack the cardio of the Scottish tight five forwards. Look at this kick from Murray. He could have easily banged this into touch for a lineout but chose instead to angle it just inside the Scottish half for Stuart Hogg to run back.

In a defensive scenario, you want to angle this kick to the tramlines so you have a predictable area of the field to fill. The side you’ve kicked from will, naturally, be well-stocked with defensive players but well-drilled transition teams will have set places to fill on the “openside” of the kick. If you know your defensive roles pre-kick, an exit like this becomes a race to the halfway line between our forwards and their forwards except our forwards have set targets to run to, whereas the Scottish forwards don’t.

Look at the quality of Ireland’s defensive line. Also, look at how our forwards are already beating their opposite numbers to the halfway line.

Ireland kept working this tactic to burn the legs of the Scottish tight five because one area of consistent weakness for Scotland is their work on defensive kick transition.

A few weeks ago, I wrote about what I believed to be Scotland’s defensive issues here. My theory was that Scotland’s front five is loaded with incomplete players who are excellent at two or three of the five main qualities that elite tight five forwards have

They have excellent players like WP Nel, Johnny Gray and Allan Dell, who are good defensive players and set-piece operators, but who fall down in their offensive ball-carrying, lateral movement and, in my opinion, their top-level cardio. As I wrote a few weeks back;

That’s the dilemma for Townsend from a defensive POV. Who are his primary tight defenders? And what are their qualities? Because I think Scotland are short of top quality athletes [in defensive transition] and it’s killing them.

Scotland needs to have front five bulk to anchor their attack and set-piece but don’t have complete athletes to choose from. When you have that issue, you have to make choices and mitigate for those choices elsewhere i.e. you pick players who have excellent defensive work rates and solid set-piece work but they aren’t the biggest ball carriers and have issues with lateral movement/cardio so you pick a more mobile back row to fill the spaces around them.

So if Scotland’s issue is their cardio and how that translates to kick transition, Ireland went after it by attacking the legs of the Scottish front five with long transition chases and trying to keep the ball in play in hot, humid conditions.

Thirty minutes in, you could see the effects. Look at how sluggish Scotland are on this chase back; kicked once again to Hogg in the tramlines.

If we look at the entire game, we see that Scotland passed the ball 85 times more than Ireland and carried the ball just two times less than we did (122/120). Yet they have 163 tackles to our 135 on a 49% possession share over 80 minutes. What does this tell us? That the Scottish spent a lot of energy on wider attacking plays, running back and forth underneath Murray’s box kicks, and defending heavy one-out carries from Ireland.

In the GIF at the start of this article, you can see the Scottish pack blowing hard. In the build-up to that, the Scottish pack had defended 12 heavy close range phases off a lineout and, immediately prior to that, they had three long-range chase backs from Murray over a period of 2 minutes 31 seconds of consistent ball-in-play time.

When players are tired, they make mistakes. They make mistakes with their positioning. They drop the ball. They overcommit to breakdowns (offensively and defensively). They start getting rocked back in contact. Add that to a side that’s already got an issue with the defensive transition positioning and you’ve got a weakness to work with if you can generate the right situations.

Here’s one in the aftermath of a pretty intense two-minute ball in play sequence involving a big kickback from Murray.

A strong lineout maul followed by a kick through from Murray. You can see Scotland’s forwards struggling to get back into position to resource the breakdown. Look at Ireland hunting this kick by comparison.

Laidlaw needs to put this exit into the stands but, for whatever reason, he decides to kick a contestable ball just outside the 22.

From here, Ireland reset into an attacking position through Conway and Larmour before setting up Stander for a close-range carry.

Look at how Scotland react; 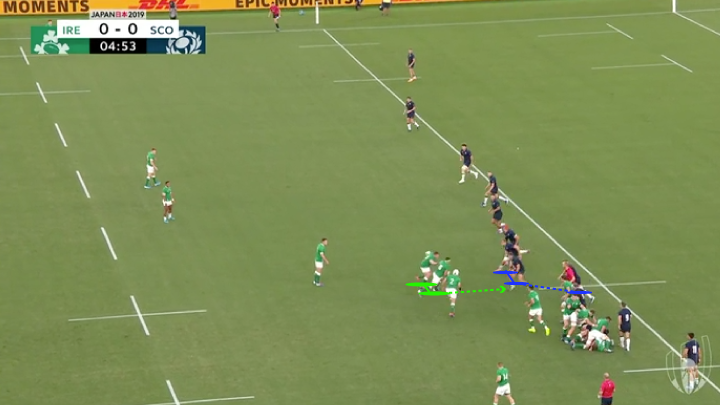 Stander and Furlong carry into Watson and Gray but this is a potential 3 on 3 with Best and Wilson as the third men on the offensive and defensive side respectively. You can see Scotland’s concern about these tight carries and they want to make sure they win this collision, naturally enough, but I wonder if there could have been better decisions here.

There’s a key moment right after the contact. In this moment, Wilson has to make a decision to add his weight to this double tackle or trust that Watson and Gray have it covered. Maybe he sees Best ready to latch on and decides to commit on the back of that. 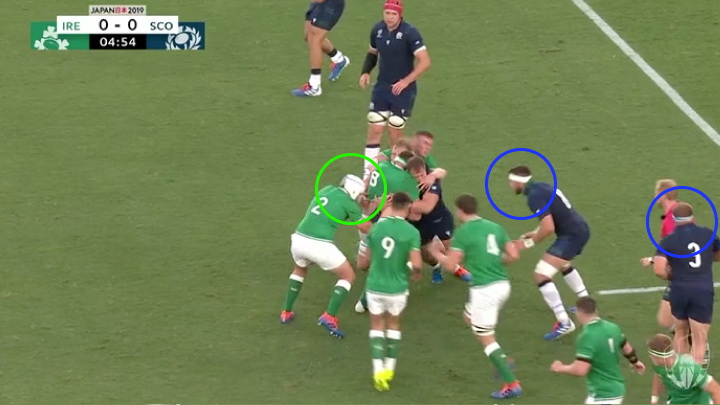 When Wilson joins in, Scotland wins the collision but lose three forwards from the fringe defence. That puts pressure on Nel’s and Gilchrist’s ruck positioning for the next phase. Look at the space that Scotland have to cover around this ruck.

Nel doesn’t know where to stand and Gilchrist is floating in 5/6m of lateral space. McInally can’t cover back across, Healy’s line holds Gilchrist and Henderson makes a huge break. Ireland would score in the resulting phases. Ireland would add another try from a driving maul a few minutes later before almost killing the game as a contest in the 25th minute. A spilt pass by Russell, a chase back off a Conway kick through, a 5m scrum – won seven on eight with Stander detached and ready to launch before the ball came in – and Furlong coming around the corner on third phase, and that was that.

The bonus point try came in the second half after multiple chase kicks from Murray and Sexton. Look at how it happened;

Watch Gilchrist (red scrum cap) and Fraser Brown resetting to the blindside of the ruck after Conway attacked Wilson in the backfield.

Slow, out of position and ruthlessly targeted by Murray and Conaway in the aftermath. And that was that.

You could tell that Schmidt was prepping for this game, and this game alone, for the last few months. Every facet of Scotland’s play, from their lineout launches to their big openside plays, had been planned for.

We went after their offensive breakdown when there was a pass between the ruck and the contact point.

We used Van Der Flier, Ringrose and Conway to advance and drift with their openside plays. We dared them to pass wide and then backed our scramble (with Larmour covering excellently in the backfield) to cover their wide surges.

We attacked their under-resourced setup rucks in the build-up to those openside plays and counter-attacked relentlessly.

Near the end of the first half, Scotland were committing multiple forwards to tackle individual Irish ball carriers and leaving massive gaps. And STILL losing the gainline. They were broken early and often.

We won’t get too far ahead of ourselves after this win because there’s a likely encounter with the Springboks coming in a few weeks that’ll be an entirely different challenge to here. In a way, we get to enter another “pre-season” of sorts against Japan, Russia and Samoa in the build-up to the quarter-final. This bonus-point win gives us the breathing room to try out some new options and get key players primed for the knockouts.

As opening day performances go, we couldn’t have asked for a more comprehensive display.

There wasn’t one poor performance from an Irish player here. Sure, Sexton had a knock limited runout, and O’Mahony and Aki left the field early after failing HIAs, but this was an outstanding collective performance.

The only thing left to specify were the standouts.

Josh Van Der Flier was absolutely everywhere – what a player. His work rate at the breakdown and defensive range was elite throughout and he outperformed Hamish Watson for the 30 or so minutes they were on the field. His work at the set-piece is outstanding in all facets. He’s fast becoming one of the most complete opensides on the planet.

Get used to James Ryan being one of the biggest names in the game. I’m struggling to think of a more complete second-row forward playing the game right now. He’s an outstanding ball carrier, an excellent scrummager on both sides of the ball, he’s got unreal pace and agility for a man of his size, he’s strong at the breakdown, a rock solid, dominant defender, a reliable front and middle jumper and he just goes all day long.

He made 14 carries for 11 metres gained which, when you consider that Scotland’s entire tight five made 17 metres off 36 carries, shows you how effective Ryan was in the tight exchanges. Oh, and he scored a try too. James Ryan is in elite company and he’s still only 23. Here he is earning 2 metres up against three Scottish forwards.

He was powerful in contact, dominant on the gainline, and filled all kinds of roles during this one – at one point even packing down in the second row towards the end of the game. He looked like a guy who timed his run to the World Cup perfectly – lean, mean and full of running with some nice passing. Another CJ Stander of the Match award at the end was a perfect end to a great day.