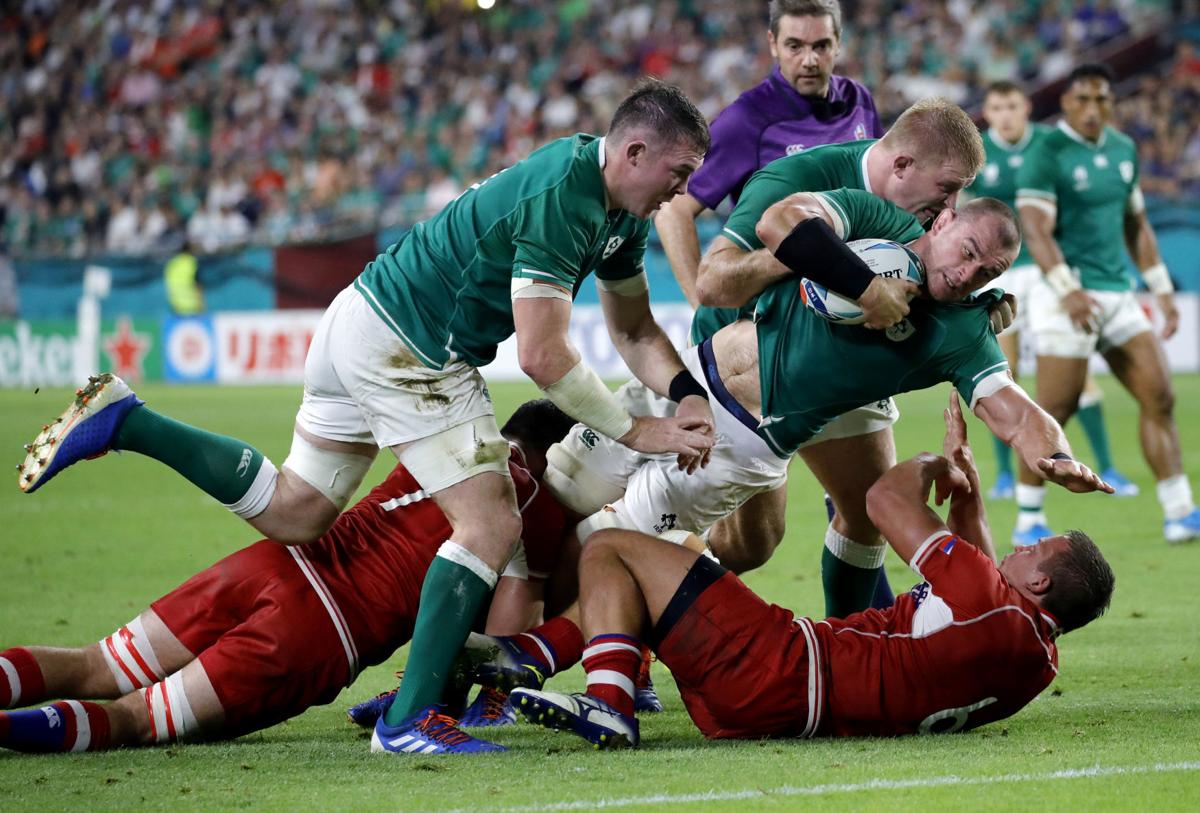 You won’t remember this game in two months time if you watched it on TV.

The players will remember it. So will the coaches. And not because it contained any hidden tactical diamonds in the rough either; you just remember games more when you’re in them. My point is that there was very little worth remembering here and in a way, that’s the problem.

I feel like there should have been something. Instead, after watching this game back three times, I just feel like the something I remember is everything that didn’t happen. Ireland left at least 15 extra points out on the pitch today by my estimation. Maybe more, if those three try opportunities were converted and some of the smaller moments turned out the right way, but those three extra scores take this from a bit of a slog to something you’d make it your business to at least half remember.

Instead, we’re left with a bitty, disjointed, poorly managed game that filled the base requirement of a four-try bonus point and not much else.

First, the mitigation. The humidity was touching 80/90% under the closed roof of the Kobe Misaki Stadium. Why is that a big deal?

HIGH HUMIDITY LEADS TO TWO MAJOR PROBLEMS FOR ANYONE PLAYING SPORT, NAMELY INCREASED CORE BODY TEMPERATURE AND DEHYDRATION. INCREASED BODY TEMPERATURE, OR HYPERTHERMIA, SEVERELY REDUCES THE MUSCLES’ ABILITY TO CONTRACT OVER LONG PERIODS OF TIME. HIGH CORE TEMPERATURES ALSO CAUSE A SHIFT IN ENERGY PRODUCTION FROM AEROBIC TO ANAEROBIC MECHANISM, WHICH MEANS THE BODY HAS TO USE UP ITS MUSCLE ENERGY STORES MORE RAPIDLY.

It also means that sweat is slower to evaporate off your body, which means not only do you lose energy quicker, it also becomes incrementally more difficult to handle the ball because your hands, arms, body and shirt are covered in sweat, making you greasier than a pig with Greasy Pig Disease, which is a very real disease that I just googled.

Throw in the grass becoming slippier as the game develops and you have got a set of environmental conditions that make playing rugby incredibly difficult. This isn’t like playing in the lashing rain; it’s worse. Rugby skill execution is harder to play when you get tired, and it’s harder to execute a skill when you, the grass, and the ball are covered in a sheen of sweat.

Rugby in a sauna, as it turns out, really fucking sucks; as a lot of teams are finding out.

I mean, would Iain Henderson finish this off on a cold November evening?

I wouldn’t bet against him. Instead, you see the ball almost skid out of his hands and a sweat-slick jersey. And he was only on the field 8 minutes at this point.

For example, Russia had a systemic weakness around the edges of the ruck, off the side of mauls and overcommitting to the openside in the aftermath of set piece defensive sets. Ireland knew this pregame – and so did you if you read The Green Eye – and so they set about creating the conditions where they could create those scenarios.

In the first minute, Ireland had an attacking lineout so set about hitting Russia in midfield on tight, hard carries. Once from Bundee Aki and then a lovely hit up from Beirne coming around the corner at pace.

Russia, as you’d expect, will be focusing on Sexton here. His tight loop line behind Aki would have drawn their attention and smuggled an extra body onto the openside of this centre-field ruck.

The key arrivals after the carry are Kleyn and Ryan.

They’re creating an alley for Ireland to attack on the next phase. Ryan blocks #2 from covering across to the space. Kleyn holds #6 into the ruck. . 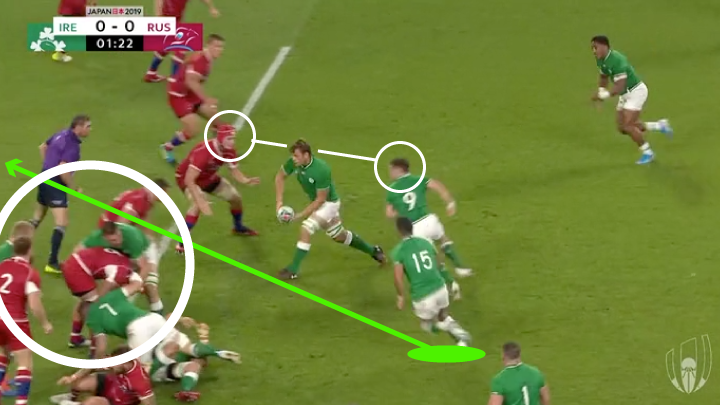 Elsewhere, McGrath runs a line from the ruck to freeze the B defender and draw out the A defender, while Murphy acts as a wall to bounce the pass inside to Kearney

Kearney can pick any line he wants to beat the now isolated “A” defender. You can see the work that McGrath does on this strike play here. He draws out “A”, freezes “B” (aided by Murphy), while Aki holds “C” far away from the action. 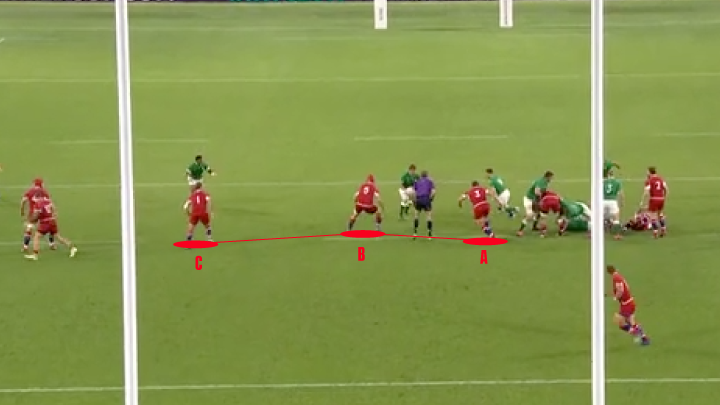 Kleyn prevents the inside cover from doing their job and getting across to cover the hole.

McGrath finishes the job by bumping off the “C” defender as he comes across. Kearney, who was hiding behind the ruck, finishes off the opportunity strongly with Sexton advancing on the break to give him two pass options on both sides.

We tried to go after this with the ball in hand a few times, albeit without as much success. You can see Sexton always looking to “underpin” the Russians on this attacking sequence. He’s essentially forcing them to “sit” in the middle of the field, rather than fanning out so he can attack their slow up and down speed.

Essentially, both of these passes went “inside” so that the next phase attacked the same group of players who made the previous tackle. My “work on” here would be for Beirne to very accidentally on purpose ensure that he bumps into Red #5 to ensure that he can’t make the tackle on McGrath.

That isn’t to say that we didn’t get success from attacking their poor ruck alignment in other ways. I wrote before the game that we’d go after Artemyev’s positioning, and we did so here for the bonus point try. Look at the space in the backfield behind three forwards in a wide defensive alignment. 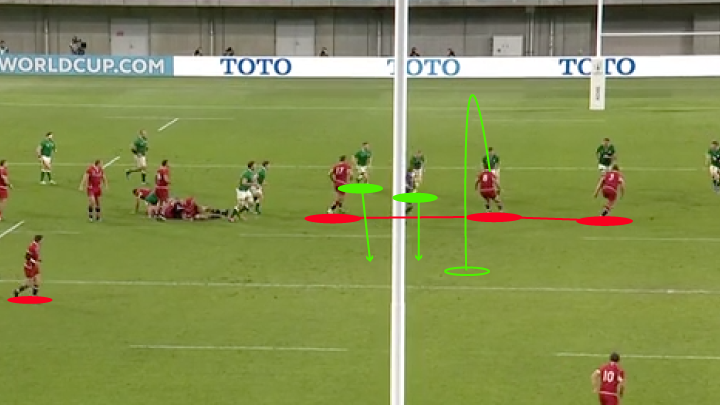 This was a preplanned strike and it worked to perfection. Conway and Earls lined up on Carty and played off his chip over the top. The forwards are done – they can’t touch Earls from a standing start – and Artemyev has too much ground to cover to be effective.

Earls has a bit of work to do to get the ball away, but when he does it’s a try all day long.

The second try came from the same thing. Gappy Russian fringe defence, Sexton with an outside angle and O’Mahony surging through for his second international try.

We also knew that Russia would be vulnerable on the side of mauls after a break. We’d have made a massive linebreak on this one if McGrath doesn’t lose his footing on the greasy surface. Whether the pass goes to Sexton or Conway, this one is probably a try.

Half the Russian pack are still shoving. The midfield defenders are turned inwards with huge gaps inside and outside. 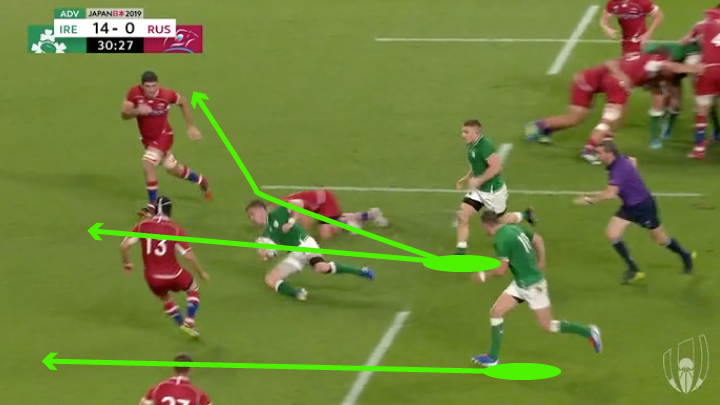 If it goes to Sexton, it’s a linebreak. If it goes to Conway, it’s a try whatever way he wanted to take it. The key part to this is Conway “hiding” behind the maul to take advantage of the break, in the same way that Kearney hid behind the ruck for the first try. This is the classic “forgotten arm” in that the worst punches are the ones you don’t see coming.

We went after it again in the second half and should have scored a try. Again, our starting point is Conway hiding behind the maul;

Stander took exactly the right option after the offload from Conway and Cronin is unlucky not to score.

Look at the work that the pack do before the break – they shield the Russian pack from covering across, which allows Stander and Conway to isolate Ostrikov on the break. 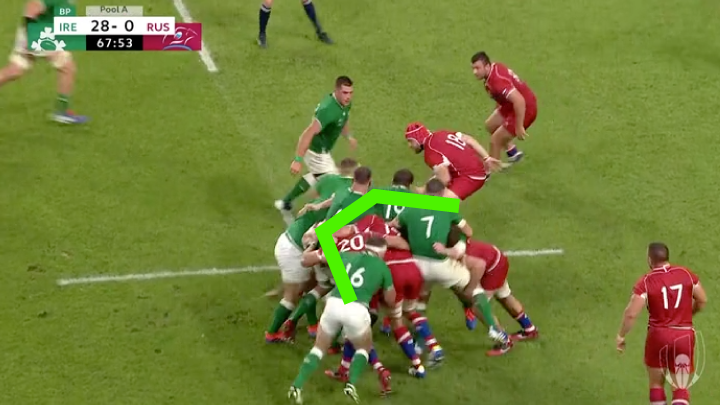 Again – should have been a try.

When we went after these weaknesses, we looked good. Impressive, even. Sure, we took the wrong option here and there. For example, this one should have gone to Aki even though we had Earls well hidden behind the maul.

But that’s not the worst thing in the world, because the process for getting into that scenario was sound. We had a good maul, we knew the break would be there and we just picked the wrong option right at the end. No big deal.

Our issue, in the third quarter especially, was that we allowed ourselves to go outside the process through poor execution of our exits.

In a lot of ways, it was similar to the Japanese game. We wanted more Russian lineouts or more high contests on our terms. This is a good example.

Does the chase make a poor kick, or does the kick make for a poor chase target? Either way, this was a ceded possession with no positive outcome and allowed Russia to reset. Here’s another example;

We booted this down Artemyev’s throat and then watched him bang it down to our 5m line. We lost 15m on this play but it was a poor piece of game management. Was the purpose of this play to generate a transition event? Whatever it was, the kick allowed Artemyev all the time he would need to pick a spot and take the kick.

If we angled this down the line, we could attack the Russian throw; something we did we a fair bit of regularity. We would stuff their maul, as we often did, and then wait for them to kick back to us in a managed way while pressurising their exit.

Here’s a good example of a managed kick – done on our own terms;

We set the terms of this kick and even though we lost possession, we were controlling the outcome. Russia would have a defensive lineout that we could attack and pressurise.

I felt a lot of the ball we ran and sent wide should, instead, have been sent down the line where we could generate the kind of transition events we wanted off the Russians. Again, that isn’t to say that there weren’t positive outcomes off of our wide plays – there were – they were just harder to execute in the conditions.

Our kicking encouraged more kick transitions, which were more difficult in the conditions. For me, short phase counts followed by angled kicks down the line would have generated better outcomes, especially in the conditions and preserved some of our energy.

Did we play the conditions? No. Sometimes, I think they played us.

Ultimately, despite the bittiness of the performance, Ireland did what was needed and got the job done here. I’d be hard-pressed to criticise them too much in that light, given the struggles that England had against Tonga in similar conditions earlier in the tournament. Reading too much into the bittiness of this win would be a mistake, in my opinion, but certain aspects of our play – overplaying our phases and poor management of the pitch – look to be a concern, especially when we’re without Murray and particularly Sexton.

We’ve got an 8-day break until we go to Fukuoka for a date with the Samoans and I think it’ll do us the world of good. Our tournament now comes down to a quarter-final, as it always was post-Scotland. Nothing has changed, yet it feels like everything has. I think some patience and perspective are the best tools for what ails Ireland right now. Two of the hardest things to get in the frenzy of a World Cup, but if they can recentre themselves, there is still no team we can’t beat.