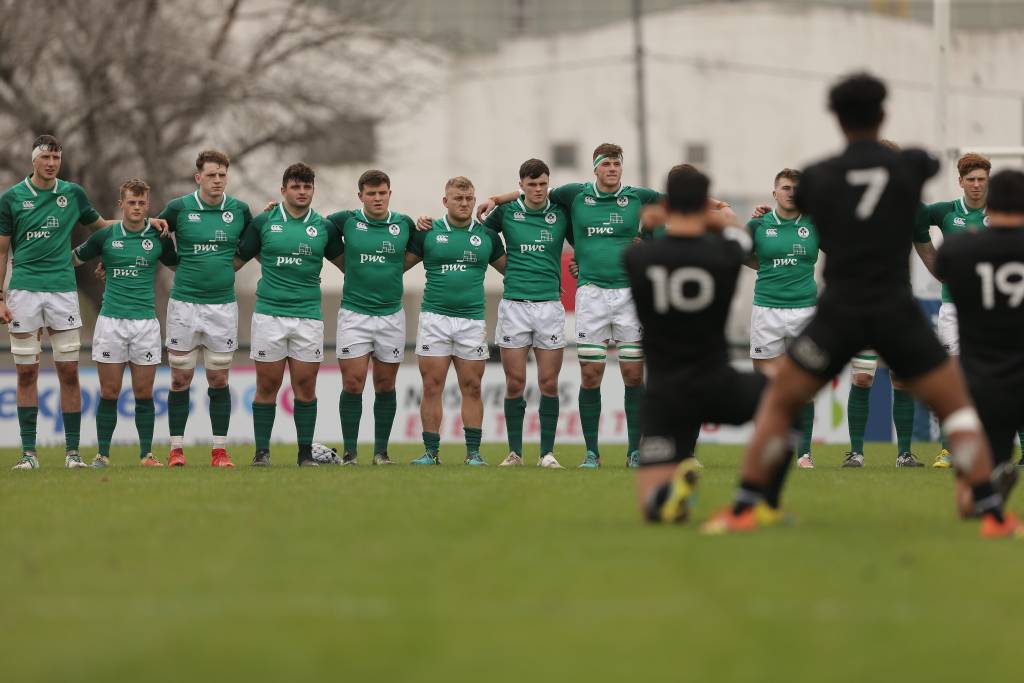 There are few truisms in this sport more obvious than “don’t give New Zealand a 26 point lead and expect to win”.

I mean, it’s true for most sides you’ll face at international level regardless of the age-grade, but especially true of New Zealand, despite the relatively poor performance the Baby Blacks have put in over the course of this Championship.

That 26 point deficit would prove too much for Ireland to come back from, despite flashes of excellent high-tempo rugby that had proved so successful in the Six Nations and the first game of this tournament against England on the 4th of June.

The final scoreline of 40-17 didn’t seem like a fair reflection of the contest as a whole but was a complete reflection of Ireland’s disappointing, error-ridden first quarter. All the usual “big rocks” of this Irish sides game were absent. Our exits weren’t great. Our lineout was a little ropey on our own throw and lacked the athletic contesting that had been present for the previous four games on the New Zealand throw.

All those little bits added up to a lot of New Zealand possession and, more importantly, impetus inside that first 20 minutes.

Their first try was just good attacking, and took advantage of Ireland’s defensive system. This kick through from Tupaea brought O’Reilly – Ireland’s full back – out of the second layer and into the primary defensive line.

After the ball reset, New Zealand’s scrumhalf Funaki spotted that there was no Irish backfield cover in the 22 so all he had to do was dink the ball over the top into space.

O’Reilly did his best to track back – and he did so with good pace, to be fair – but the bounce killed him and, with four New Zealand chasers against one retreating fullback, the odds were in the Baby Blacks’ favour. This wasn’t so much an error as New Zealand doing extremely well to “roll” across Ireland’s primary defensive line without getting slowed too much combined with some iffy defence on the wing

Still, being 7-0 down inside the first five minutes isn’t a disaster at all at this level and Ireland would have been confident enough in hitting back. When the Baby Blacks failed to make touch off a penalty, Ireland had a good opportunity to strike back and win back some of the impetus lost inside the first five minutes but two small technical errors turned an inconvenient start into a mountain to climb inside 10 minutes.

This is some good quick thinking from Vaa’i;

I don’t think this is offside. This ball is “out” the second that Ryan goes to clean out Newell and goes off his feet. The ruck doesn’t end when the scrumhalf picks it up, it ends when it is beyond the “arc” of the feet of the ruck on the offensive side. That queues Vaa’i to attack Casey, who manages to get the ball away regardless.

There’s a bit of a scrap, but Ireland retained possession until Kernohan went off his feet on the next ruck.

When nobody is on their feet over the ball, there is no ruck and, as such, New Zealand can just step in and take that ball. It’ll probably be the easiest try Norris will ever score but it’ll frustrate Ireland no end. Not even ten minutes on the clock and 14 points down? Not good.

From there, we just continued to make errors. A handling error from Ahern under a high ball, a few missed tackles, some average positioning later, New Zealand were attacking on the Irish 22 from a lineout.

This example just goes to show how important edge defence decision making is.

If Russell reads this bounce right, he probably swallows up Forbes and gives Ireland a chance to reset defensively. Instead, the New Zealand fullback surges past him and will be disappointed he didn’t give the pass outside sooner. The Baby Blacks would score in the corner a phase or two later, as Ireland just couldn’t recover from the ground lost in the initial break.

New Zealand would add another on 21 minutes and it was practically game over.

Nothing really went right for Ireland inside that first half.

When we managed to generate a bit of field position through high-tempo, wide phase play – here for example;

We just weren’t able to get our usual lineout contest into the game. Our timing is just a little off on Ahern’s counter-launch here and it gives New Zealand a clean exit.

That was a pretty good illustration of Ireland’s issues in getting back into this game at multiple points. Good work was followed up by indiscipline or poor execution an

We eventually pulled a score back through Wycherley and were unlucky not to convert this long-range effort right before halftime.

Foley will be kicking himself over that last pass to Casey but he was put off at the last second by Taine Plumtree’s excellent trackback. Ireland earned a penalty on this phase but couldn’t convert the lineout maul into anything tangible.

Ireland were much better in the second half – scoring two more tries, one of them one the highlights of the tournament.

What a try. Superb handling from Ryan, Ahern, Wycherley and Baird – all forwards. Ahern’s offload to Wycherley and Wycherley’s subsequent draw and pass were something really special, as was Casey’s support line underlining it all. Special praise has to go to Baird’s carrying in the wide channel here. It was something else – all day, in fact – and his athleticism and ball handling point to a potentially very special player.

For all that, it wasn’t enough to get Ireland back into the game.

New Zealand stretched out their lead and that was that.

Finishing eighth in this tournament feels like scant reward for this group of players, especially when you consider the eventual winners of the World Championship – France – were beaten by Ireland earlier this season. The reality of it is, you can’t lose 10/11 guys from your squad at this level and hope to compete at the top end of the tournament.

Sure, you expect injuries, everyone does, but between the end of the Six Nations and this game against the Baby Blacks, Ireland lost their captain David Hawkshaw, Scott Penny, Conor Philips, John Hodnett, Ciaran Booth, Stewart Moore, Sean French, Harry Byrne, Martin Moloney, David McCann and Iwan Hughes. All of whom would be in with a shot of making a matchday 23 if not starting outright.

So that eight place finish, while disappointing for the Grand Slam champions, has to be taken in context.

Even with the injury issues, I thought Ireland did well against very tough, physical opposition in all five games. There were no handy ones for this group – England, Australia, Italy, England again and New Zealand is a tough schedule. We won’t be happy with winning two from five but the performances were better than that record suggests. The real point of this tournament from an Irish POV is this; how many future top-level professional rugby players are in this group? When we look at that question, this is one of the best looking squads in a number of years – the likes of Baird, Ryan, Wycherley, Clarkson, Tierney-Martin, Ahern, Hodnett, French, Casey, Healy, Flannery, Wren, Turner, Hawkshaw, Byrne, Penny and others all have test rugby in them with a bit of luck and development.

When we consider that, it’s a hugely encouraging tournament despite the final placing.