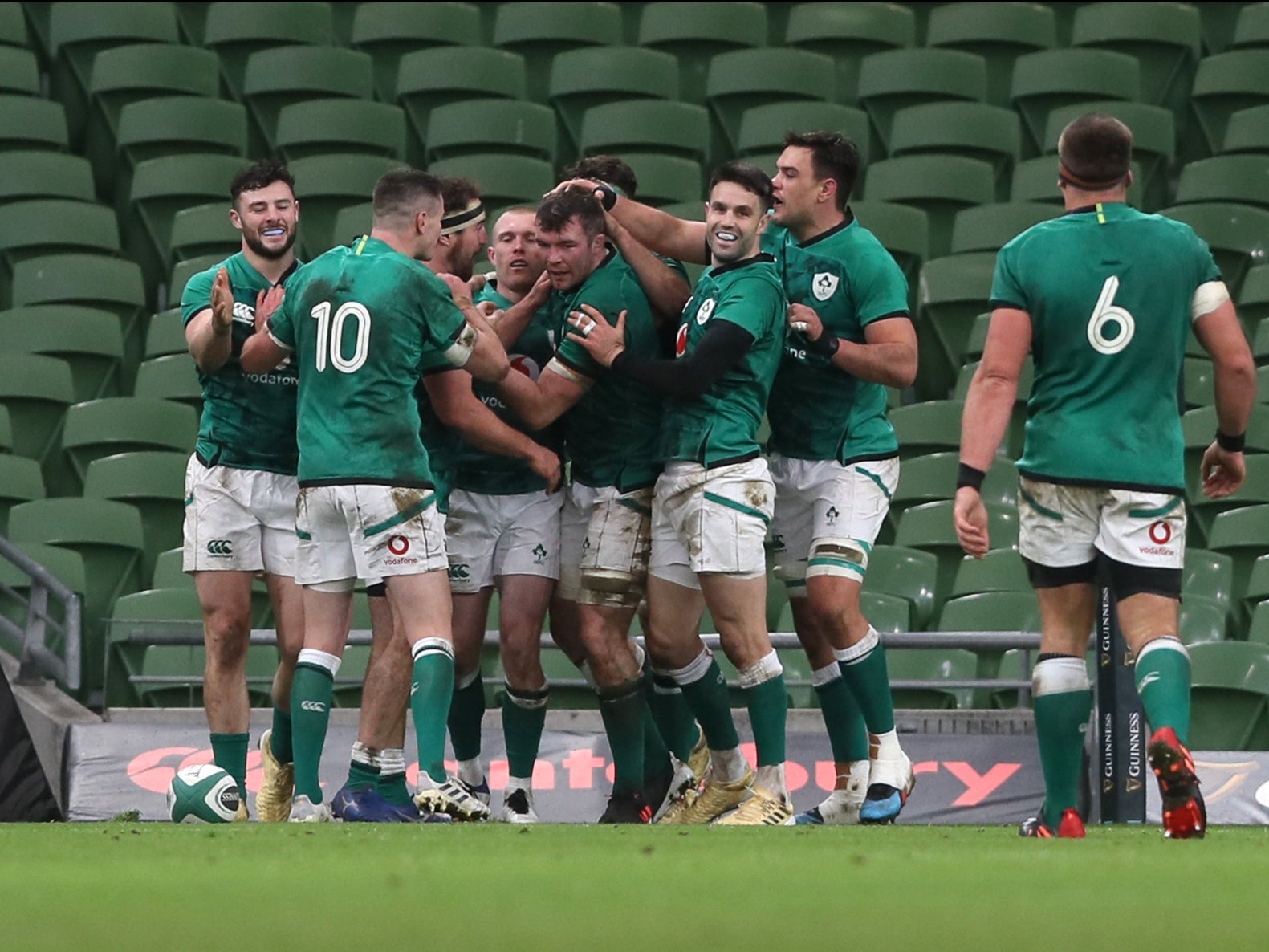 By Tom Savage8 min read
Scotland have definitely improved but there is a softness there that Ireland were ultimately able to exploit in what became a comfortable win. It was handy enough in the end, despite a few scares in the first half and midway through the second and it cemented Ireland’s place behind France and England, both literally in this Autumn Nation’s Cup and conceptually, something Johnny Sexton was quick to admit after the game.

“We feel we aren’t at the top table yet. We haven’t been able to win away from home against the big teams like France and England but we’ve won every other game.

“Obviously, the performances haven’t been amazing for 80 minutes. Last week was a prime example, a good 40 minutes but then we took our foot off the gas.

“We back our coaches, we think they’re doing an outstanding job. It’s very different from the previous regime and it takes a little bit of getting used to. We’ve another step to go but we’re happy with our progress.”

I mean, he’s right, right? At least about the “not being at the top table yet” stuff. Ireland’s recent losses to France and England have been decisive and pretty clear indicators of where we are relative to them and it would be delusional to think otherwise. But, are we decisively better than Wales, Scotland and Italy? Yes, I think we are.

No. I think Irish rugby has come too far to accept third place in Europe when we’ve danced with the very best and beat them two years ago. Yet, this time next year will be three years from that game against the All Blacks – half an aeon in rugby – so at some point, we’ve got to show who we are against the very best now.

That wasn’t today. It was good, don’t get me wrong, but the inherent softness in Scottish rugby dulls the sharp edge of healthy wins like this. Scotland played some of their best rugby of the restart for around 20 minutes in the first half but then they just… went away. They didn’t just disappear, of course, Ireland just upped the physicality, found a bit of coherence with the ball in hand, the scores came and that was that. Scotland are good, don’t get me wrong, some of their phase play in the first half was really good and Hogg looked like the standout player for much of the half but when Ireland turned up the heat, they melted. 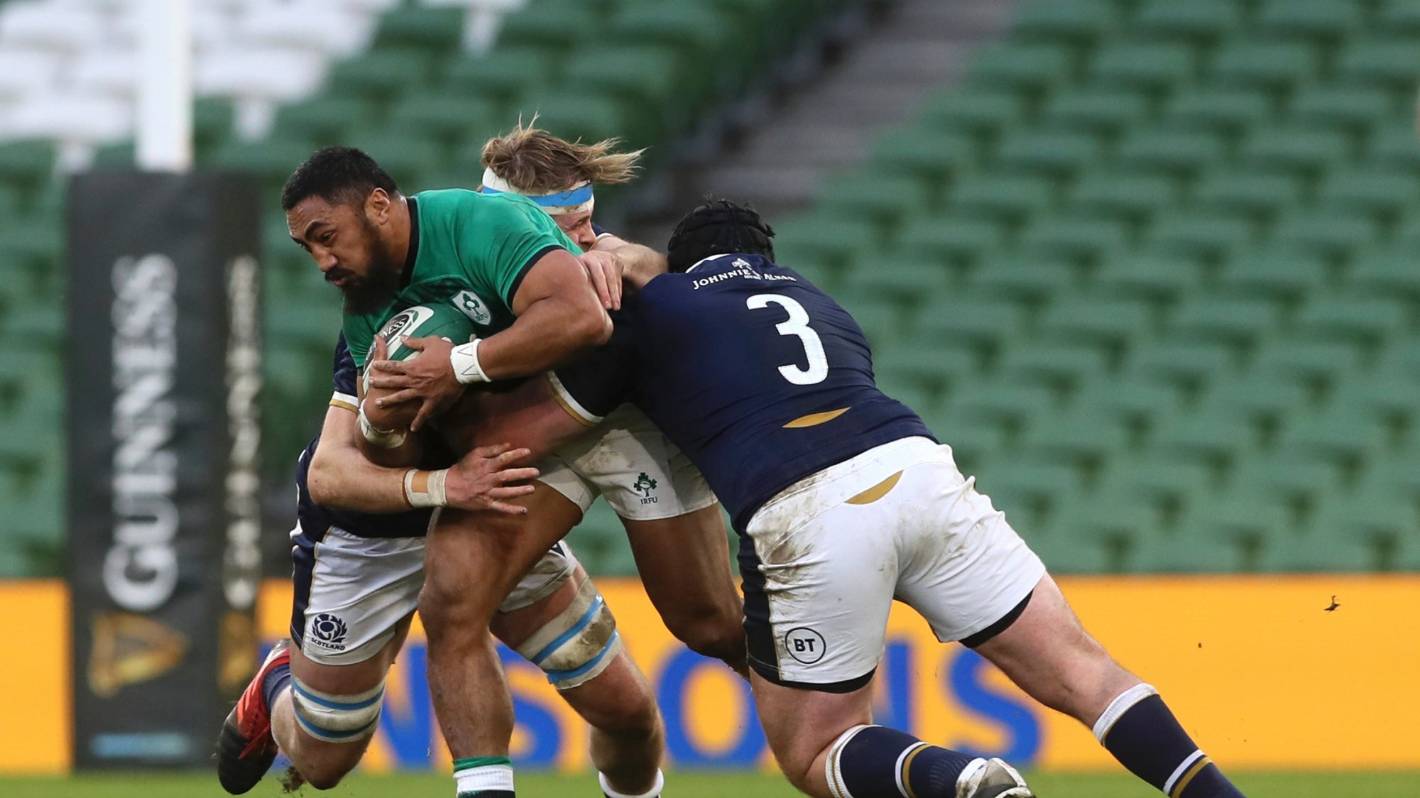 I spoke before the game about the Bad Vibes that would follow a loss to a team we’ve regularly beaten even as we’ve slid from the pinnacle of November 2018 but, outside that 20-minute spell in the first half, those vibes were largely avoided.

By working where they were strong and where Scotland were weak – hitting the central spaces, waiting for a tight compression and then releasing the ball to layered attacking runners.

Have a look at this example from very early in the game.

We hit Doris off the top of the lineout for a big collision point win that compresses the Scottish defence in the central space. Murray kicked off that compression with Stockdale and Henshaw running a pinch chase on the landing spot with Hogg and Graham out of position – they were in the correct backfield spaces to defend phase play but were caught napping with the box kick. Ireland won the aerial duel, Ryan’s carry compressed Scotland at the collision point and the effect was so profound, Ireland didn’t even need quick ball to execute the release.

O’Mahony saw the space in the backfield but got his angle slightly off on the kick through for Earls. That kicking space was one of the primary products of Ireland’s collision dominance in central spaces throughout the game.

The formula was the same almost every time – generate a compression in central areas, work through the system structures (be it a pod of three or a pod of two) and kick into the space that the Scottish backfield must leave to compensate for the earlier compression.

We used this a few times during the game to good effect. Win collision points on your three pod and then your two pod off #10, and the space will appear, like below.

This produced a big moment in the game when O’Mahony could stick a dominant shot on Scotland’s captain, Stuart Hogg.

The passage that lead up to Duncan Taylor’s yellow card was an example of how collision dominance in central spaces followed by preserved possession in the 5m channel produces the width and options that will stretch defences.

Doris’ initial collision point is followed up by a lovely run by Henshaw to compress the procession of the Scottish midfield across the field. Sexton’s aggressive attack towards the gain line preserved the space for the Irish back three – Keenan had looped around to the wide channel.

From there, Ireland broke down the wing but, crucially, won quick ball right on the 5m line – Earls cleanout on Hogg was crucial – and from there, we could deploy a full 3-2-2 forward shape across the openside, where it worked almost exactly as designed.

O’Mahony’s won collision in the opposite wide channel allowed Ireland to extend again, which opened up a tip on in the pod of three from Henderson to Doris. That won gain line produced a play that would have almost certainly lead to a try if Duncan Taylor hadn’t slapped the ball down in an attempted tackle. His hand action was unnatural and totally understandable. Ireland took three points from that chance but it was a clear illustration of how dominant central collisions followed up by hard width on the next phase can unlock the potential of the 3-2-X variant that Ireland are deploying under Catt.

You can see an exaggerated version of the tight compression/wide release concept on this sequence.

If you follow that up that kind of collision dominance with *checks notes* kicking the brown out of Scotland off #9 and at close range, you’ll produce scores against Scotland because that’s what tends to happen when Scotland lose.

Ireland’s issues in the first half came from a greatest hits compilation of what has dogged Ireland since the restart. Blown lineout lifts in key areas inviting pressure, poor ruck management, troubles at the scrum and blown back three alignments.

That last example, where Sexton hung up a kick for Andrew Porter, Cian Healy and Iain Henderson to chase looked like a critical error by Sexton but I think he expected a central chasing line by Stockdale but Stockdale was out of position.

Later in the half, Keenan and Stockdale made a mess of their backfield coverage on a transition play. Keenan chose to kick downfield for territory on a long Scottish kickback but both Stockdale AND Keenan chased it. This left a massive hole in the backfield that Van Der Walt needed no invitation to kick into.

Well, unless you count Stuart Hogg shouting and waving in enough space to park two buses as an invitation.

Scotland conceded a needless penalty on that lineout generated from that mismanagement to let us off the hook and we took over from there but those moments of poor play would have cost us against better, more complete opposition.

Where are we at the end of 2020? Mostly where we were at the beginning; winning over Scotland, beating Wales and with unanswered questions against the new/old Big Two in Europe but for now, that will do for Andy Farrell who can face into the 2021 Six Nations with a few more cards to play.

This was a good collective performance for the most part.

I thought the front five did reasonably well. Andrew Porter was the standout for me again (even if I got the feeling that he got the rub of the green on a fair few of his scrummages). His work around the breakdown as a physical driver of quick ball was vital to Ireland’s better moments with the ball in hand. The rest of the front five had their moments even if I felt that it was another below-par game for what we expect from James Ryan. He did have some better involvements than previous weeks, however, so hopefully this is the beginning of what might become an upward trajectory for him after a worrying few months.

I thought Aki and Henshaw looked good in midfield and showed hints of the dominant relationship that pushed Connacht to a PRO12 title in 2015/16. Aki did what he usually does – make tough ground in contact and dominant collision points – while Henshaw got to stretch his legs a little in attack. Henshaw, in particular, looked like he enjoyed the extra room to stretch his legs, even if I felt his medium-range passing off his right side needs a little work.

Keith Earls scored two tries but showcased some high-quality, all-around work. He made a number of key offensive breakdown wins, won penalties with his aggressive chase lines and was exactly where he needed to be to finish off the opportunities that came his way. He looks as good as ever.

Johnny Sexton showed the difference between his level and the level of the guys currently vying for his spot in the Autumn Nations Cup squad with a composed, highly effective performance that didn’t need to pull out of third gear. He’s got a fair bit left in the tank.

I thought the back row were the best unit on the field.

Stander showcased a different side of his game in this one. He carried the ball as much as anyone but he seemed to do the majority of his on-ball work in the wider areas – off #10 and in the 15m channel – while setting a physical tone at the offensive breakdown.

Caelan Doris was around 10 minutes away from a five-star rating. He was very, very good here. He started slow, sure, but once he got into his stride off #9 he made some crucial carries that won crucial gain line in central areas. We’ve got to see him duplicate this against a France, England or any of South Africa/New Zealand/Australia but all the signs are good that Doris is a serious player at the highest level.

Peter O’Mahony was the dominant player in this game and showed once again that whenever you think you have all the answers on him, he changes the questions.

This was a really complete performance from O’Mahony, who grows in importance with how settled Ireland become in the 3-2-X shape. Offensively, he showed a wide skillset with the ball in hand, setting up one try, being a hair away from putting Earls through with a grubber and was a stud away from scoring a try in the corner himself. Defensively, he looked much more effective patrolling the middle spaces with a licence to drift out, rather than being stationed on the outside with licence to drift in. His lineout was, as ever, hugely effective.

This was an example of what O’Mahony can do in a system and role that suits him perfectly. Outstanding. ★★★★★