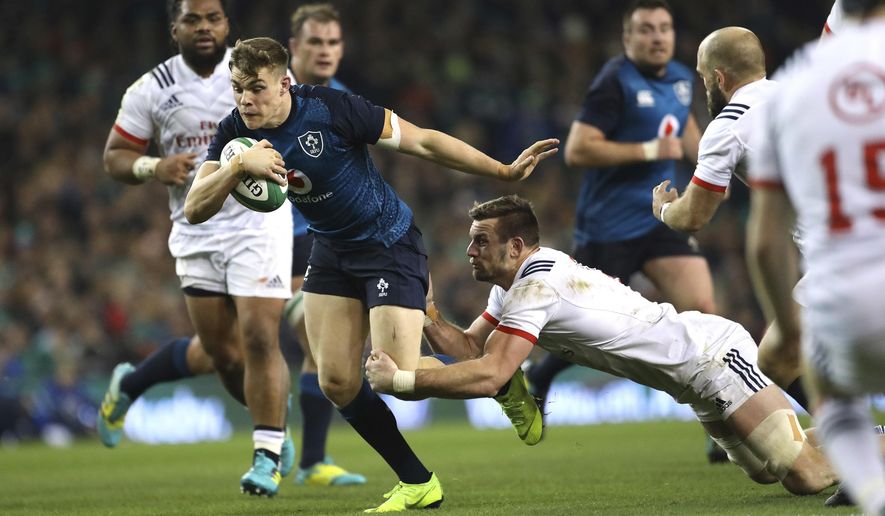 Watching this game from my sickbed was a gnarly experience.

I had expected a bit of resistance from the US – they’re a team stacked with hard running big boys who know how to stick a shot on like you’d expect – but ultimately I saw Ireland running up a big score in the end.

In reality, this was always going to be likely result, like we spoke about pre-game, and the only real issues would be; How big would the initial US fight be, how well would Ireland pull away and who would impress Joe Schmidt and Andy Farrell?

The initial US fight was quite impressive. At one point in the first quarter, Ireland and the US were tied at 14 points apiece with Iain Henderson sitting on the naughty step for 10 minutes in the aftermath of a penalty try off a maul.

That pattern – conceding off a maul – was a fixture of Ireland’s issues in the opening quarter. The first try came from a pretty good break play off a 4 man lineout maul.

The initial counter-jump and counter-maul were quite good but the US movement behind the US maul was nicely structured. Look at the two runners stacked in tight alignment right behind the maul before splitting off to attack the short side of the maul.

The hooker, Taufete’e, stayed on the touchline after the throw while the blindside winger drifted to the short side from behind the scrumhalf and linked the pass off the maul to the hooker, who barged his way to a lovely score.

Should he have been hit into touch by Bealham covering? Perhaps, but that takes some of the credit away from the US hooker, who is a powerful, low centre of gravity runner that was on the end of a nicely designed maul scheme.

The initial surge from Beirne and Ruddock is quite good and the brace after the USA peeled away from that was pretty solid.

It started to go wrong on the infield flank when Jordi Murphy started to lose his arm battle with Cam Dolan and got stood up. If you’re standing in a maul, you’re losing, and that pressure lead to the infield side collapsing, a penalty try and a yellow card for Henderson who lost his feet as the US surged through the infield side.

It was concerning at the time, but that was about it from the Eagles for this game. The rest of the match was a study of how well Ireland could adapt to the new combinations all over the field.

Ringrose ended up choked into a maul and turned the ball over. They were the little frustrating bits and pieces that characterised the first quarter.

Even then, Ireland looked like scoring every other phase.

Andrew Conway’s first try looked like a try scored in transition but it was actually Conway attacking the slow lateral defensive speed of the US centre-field defence.

He skated past their entire front five coming against the grain and put Rhys Ruddock away into space before tracking the break and finishing the job himself.

He added another a few minutes later after lovely handling from Beirne and Addison, before setting up two and finally getting his hat-trick.

I wrote before the game that Ireland would look to attack the US A, B, C structure on multiphase plays and it was this that lead to Jack Conan’s try right before the break.

Ireland got good width off the ruck to Byrne, who drifted to the outside shoulder before hitting Conway on the inside shoulder to find a lazy fringe defence. Conway’s weaved run after the linebreak fixed the defender and he put Conan away with no hassle.

That ended a tricky enough opening half where Ireland dominated in the scrum and had a few iffy moments in the lineout from a calling perspective.

Calling for Conan to go up at the front against Cam Dolan ended in a predictable outcome. That, in a way, characterised the work in the first half. There was a clear difference in class but there was a mental block holding Ireland back from cutting loose.

By the time that mental block cleared, it wasn’t necessary as the US had started to tire in the face of relentless Irish pressure and, as a result, we could start to press ahead – mainly through the scrum.

That gave Ireland field position and a platform to attack. McCloskey scored after a series of dominant Irish scrums inside the US 22. Ireland won consistent penalty opportunities further out but the US challenge at the front of the lineout was really pressurising the Irish throw and call design, which lead to a few frustrating turnovers.

Once Ireland hit 30, you could see the US starting to fall away from their structure and further holes appeared. A few more tries followed. Roux powered over from close range. So did Beirne. Ringrose attacked the lateral defensive speed of the US centre-field to put Conway away for his hat-trick.

Game over. In the end, we won pretty much as expected and topped off a superb November Series that saw Ireland display their front line power and their growing depth through the chart. There are active questions over 15 or 16 seats on that plane to Japan at this stage and that’s about as good as good be expected a year out from the World Cup.

We’ll roll onto the Six Nations in February with a whole load of pressing seating arrangements waiting to be answered. Exactly as it should be.

I thought John Cooney played a fair bit below his level in this game. He wasn’t awful by any means, but he was far from his authoritative best that we know he can produce at Ulster. He’ll get another chance but he won’t be overly delighted with his performance here.

I thought Dave Kilcoyne had a very effective game here. He consistently got the upper hand on the US tighthead Paul Mullen and was a dominant force in the scrum for the entirety of his 60 minutes.

You can see him turn on the power on the loosehead side here and melt this scrum after a strong initial shove from the US. Physical, abrasive, powerful. Good stuff from the Killer.

John Ryan had a hugely effective cameo off the bench. He scored a try at the death after running a lovely support line off Murphy’s carry and nuked the USA scrum from the very first minute he walked on the pitch. Exactly the ending he’ll have wanted for November.

Rhys Ruddock and Jack Conan had very physical games in the Irish back row and really wore out the US centre-field defence with the power and athleticism of their carrying. Jordi Murphy played well too but lacked some pop in the maul and in his defensive efforts.

Garry Ringrose had another smooth performance in the #13 shirt. He’s just so, so good at everything that he does in midfield. He’s a robust defender, incredibly smart positionally and can run the ball like a back three player while offering the handling of a flyhalf. What a player.

Tadhg Beirne had another athletic performance in the Irish second row. He counter-jumped well, counter-mauled with power and carried the ball with a lot of zip. He was Ireland’s primary lineout target and hit his usual basics incredibly well. He’ll have wanted to line out against Argentina and/or New Zealand this November, so to only play against Italy and the US will irritate him, I think. One thing I don’t have to think about is that a Tadhg Beirne with a point to prove can only be a good thing for Munster and Irish rugby. February will be his target now.

Even with the relative level of the opposition taken into consideration, Andrew Conway had a standout game. He looked incredibly dangerous every time he touched the ball a hat-trick coupled with two brilliant assists.

A really superb performance, from a guy who’s aching to prove a point all November. ★★★★★

There’s a lot to cover in this game – and the Munster one – and I’ll be doing both on TRK Premium all week long with GIF and Video Articles. Be sure to check out the Post Match Wallycast on Monday.