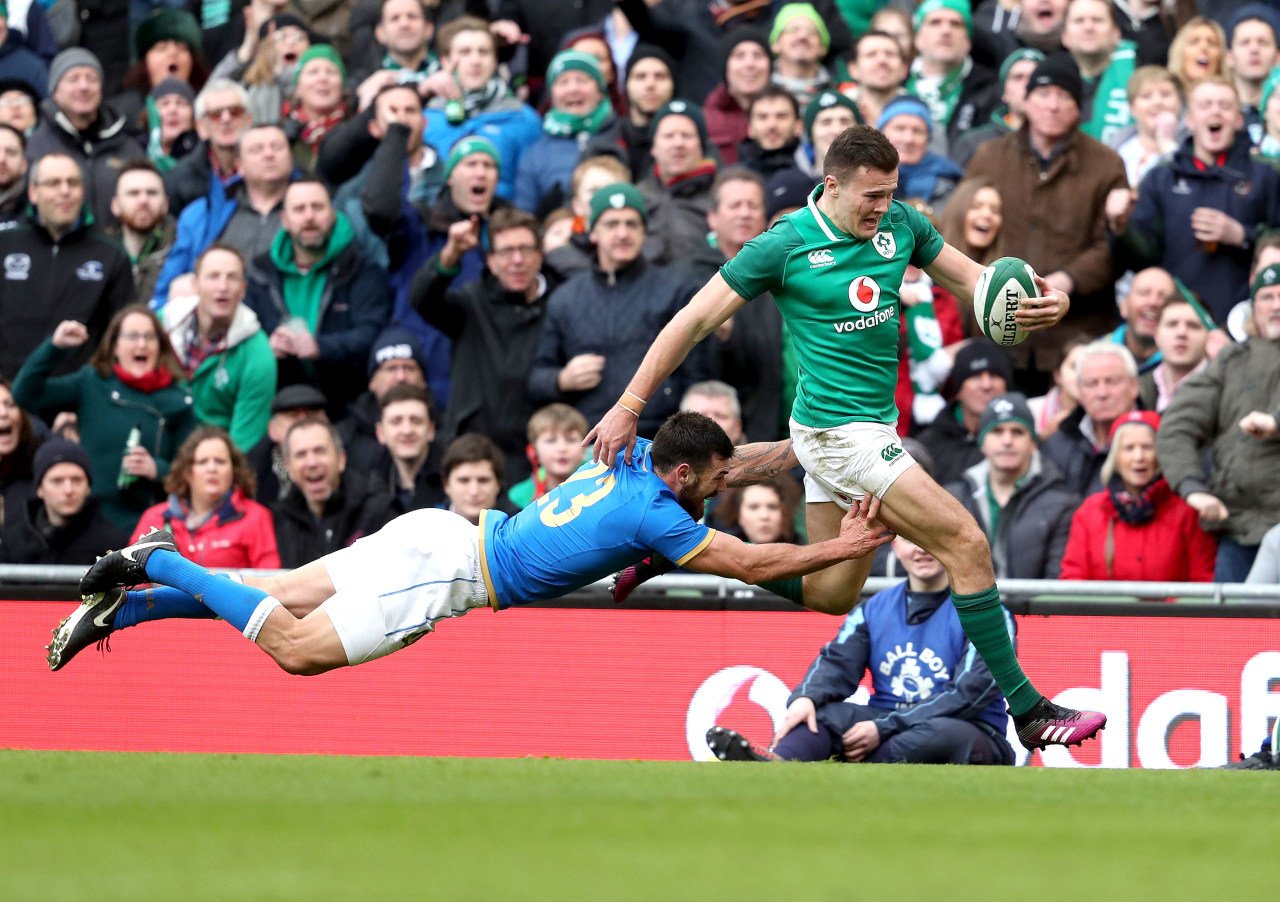 Long story short – Ireland beat Italy out the gate in a manner that many would have predicted before the game.

So what does one make of it all? Well, Ireland were quite good for 55 minutes, scored some lovely tries and looked pretty ruthless in small stretches. The wheels started to come off a small bit once Schmidt emptied the bench. Not in a disastrous way by any means, but we definitely lost shape once Murray and Sexton departed the field – in attack, but also defence.

The 19 points we conceded in the second half will bother the coaches (and the squad) because they betrayed a “looseness” that didn’t fully reflect Ireland’s dominance in this game – but I’ll get to that later.

There were a few questions raised ahead of this game.

Would Ireland attack with more cohesion than they managed against France? Would Ireland earn a bonus point? Is starting the same backline as last week a mistake? Would there be a hangover after “Le Drop”?

Those questions were answered fairly emphatically inside the first 35 minutes. Ireland ran in four of their eight tries, could have scored two or three more and beat Italy around the Aviva Stadium with meticulous cruelty, like the Italians owed Joe Schmidt money. It was a first-half performance that will probably raise questions about Italy’s place at this level – wrongly, I might add – but that’s how off the pace Italy looked in that first half. Despite the disparity in ability between the two sides, having a bonus point wrapped up after 35 minutes is a rare enough event at test level. In truth, Italy looked like they had no business even being on the field in that first 40 minutes, such was the yawning chasm in quality between the two sides.

Ireland had all the quick ball they could ever want, more possession than they knew what to do with and looked dangerous on every phase. Bundee Aki and Robbie Henshaw were making real ground on their carries and Murray/Sexton were making good decisions and moving Ireland around the pitch with the kind of IQ and precision that we’ve come to see as standard from them. With all that going Ireland’s way, the tries just started to flow. There was no great moment of pressure that “broke” Italy.

When the bonus point was wrapped up, this became a mini-game of points accumulation and managing the tumult of a full bench switch. A lot of Ireland’s defensive issues came in the aftermath of what looked like an unplanned backline reshuffle. I’ll focus a small bit on the Italian tries for a small while.

Henshaw’s injury was desperately unfortunate in a few ways. First, for the player, who had a stormer up until the act of scoring his second try seemed to pop his shoulder. It also meant that Ireland had to reshuffle into an emergency alignment. Earls going to 13 outside Aki probably wasn’t the “A” plan here, and that meant we had Larmour coming into a more dangerous area of the pitch from a defensive perspective. I think the plan was to bring Larmour on at fullback, where he’d have a bigger attacking impact closer to the point of the ruck and be less vulnerable to moments like this on the outside edge.

I don’t know if Larmour will come in for the same criticism that Stockdale did but it goes to illustrate my point that the wing is the most high-risk area of the pitch to defend. Larmour was beaten by a power step in space after a kick transition – it happens. Larmour will do the exact same to many a winger during his career. He’ll learn from this episode and get better.

The annoying thing from Schmidt’s perspective is that two of the three Italian tries came from kick transition – the same thing that cost us against France.

A somewhat aimless clearance from Kearney off Ireland’s restart possession lead to the first try, which was finished well by Italy;

How did Ireland get caught on the openside with short numbers like this?

Because Italy ran Kearney’s exit (below) back to the side of the field where most of Ireland’s lineup had been based in the phases directly after the restart;

From there, they pinned Ireland on the left half of the field and got the ball to the right half where Ireland had short numbers and a bad alignment (Leavy defending too much space).

It was a good turnover attack. It’s also an example of how a flyhalf puts his team in position to defend well. Would Sexton have made that pass back into the 22 at a pace that put Earls and then Kearney under pressure? Probably not. That isn’t to excuse Kearney’s kick – which wasn’t great at all – but little bits like that are the things Carbery will learn as he gets exposed to this level. And they don’t end there.

Italy’s second try came directly in the aftermath of this exit from Carbery;

That gives Minozzi all the time he needs to have a crack off Larmour on the outside edge. A lot of people wondered where the Irish cover was on this kick – they were on the other side of the pitch trying to work across.

It’s a steep learning curve for young lads, even against a team like Italy that are a mile away from where they need to be but these moments can almost be more instructive than “good” moments and there’s nowhere that gives harder lessons than the wing and the #10 shirt.

They’re the little bits that’ll frustrate Ireland when they look back at this game.

But let’s not forget that we put away some lovely scores too – this one was my pick;

A super-stack on the short side mixed with precise hands and beautiful running lines culminated in a lovely try for Conor Murray, who had three touches on this play. Jack Conan’s weave infield and pass out the pack was the killer moment here, but it’ll be a hugely satisfying team score for Ireland to look back on.

What did we learn? In simple terms, we learned something we already knew – that Ireland are 30 points better than Italy. We learned that we’re still vulnerable to giving up kick transition errors, but I really do believe that is eminently fixable.

Ultimately, this was a job done. Five points were needed, and they were achieved with ease. We won’t get carried away with the good or the bad – it was that kind of game – but I’m sure there’ll be plenty for Ireland to discuss on Monday.

The Slam is still on. Come on down, Wales.

As per usual, players are rated based on their time on the pitch, if they were playing notably out of position, and on the overall curve of the team performance. I didn’t rate Tadhg Furlong due to his injury in the 3rd minute or Cian Healy due to being on the pitch for 13 minutes.

I realise I spent a large part of the above criticizing Joey Carbery, but I’m reluctant to actually rate him too low for this one. He’s 22, has 24 Leinster caps and 7 Irish caps. He doesn’t play a lot at #10 in games of consequence for Leinster and it showed here. He had a great hand in Stockdale’s first try, was perfect off the tee and showed some good attacking instincts. He had a few rash passing options (including right at the end) and one bad kick transition, but he’ll hopefully learn all he can from those experiences. If you’re not going to try out a promising young lad at home against Italy, when will you try him?

Jack Conan and CJ Stander had a decent half each. Conan showed some nice subtle touches, especially for his assist on Murray’s try. Stander brought a different type of presence from #8 – blunt force trauma. He carried hard around the fringes and got some good heavy gain line.

Dan Leavy had some decent moments here. He got caught for Italy’s first try but he was very busy at the ruck on both sides of the ball. I didn’t think he got the rub of the green from Poite on some of his jackals, but his work in the build-up to Earls try was high quality.

Leavy’s a real brute over the ball and is developing nicely.

Jordan Larmour had a lot of hype coming into this game but you earn your hype, and he certainly did. He didn’t have a fairytale debut by any means but he showed some nice flashes of his ability. He’s still learning who he is as a player, but once he finds out there’ll be few that’ll stop him.

A good display from all these lads and they played their part in a healthy 5-0 match point win.

When Tadhg Furlong limped off after three minutes, you could have been forgiven for feeling a little trepidatious at the task presented to Andrew Porter. Whatever happened, the 22-year-old tighthead convert would have to do 77 minutes against a game Italian pack in his 4th cap. He handled that task with aplomb, with strong scrummaging and a number of impactful, power carries the highlight.

Devin Toner and Peter O’Mahony had excellent games. They were the top passing forwards on the pitch and supported the Irish quick ball effort all day. Quality lineout work too.

Conor Murray and Johnny Sexton were just smooth. They generally took the right options and executed what they had to when they had to. As good a halfback pairing as there is anywhere in world rugby.

Jacob Stockdale had a really effective game. Two tries were the obvious highlight but he’ll be pleased with his contribution around the pitch too. His confidence to back his pace on the outside after a long-range intercept was great to see. Six tries in six games? That’s as good as he could have dreamed.

Bundee Aki had a good day out here. He got through a mountain of defensive work in the middle of the pitch, scored a try and set one up. He looks more than solid at this level.

Robbie Henshaw had a fantastic game up until the point that he injured his shoulder scoring his second try. I’m still not quite sure whether he’s a 12 or a 13 but he showed what he can do as a midfield strike runner in this game.

Another day, another big day out for Keith Earls. Sure, there was his customary try against Italy, but that was backed up by a mountain of work under the high ball, solid defensive positioning, slick hands in the wide channels and this bit of selfless, savage work rate.

Ireland had the game won. There was a minute left. Why deny Bellini (no slouch himself) a bonus point try under the posts? Keith Earls could easily have given this a cursory chase before easing off and saving himself the lung burn. But that’s not Keith Earls.

He knows that his job is to stop things like this from happening, so that’s what he was going to do. He chased him down like the T1000 running after Arnie. Look at him wobbling back to his feet after making the perfect stop and gassing himself out after 79 minutes of hard work; show that GIF to your kids if they play rugby or any sport, really. That’s what their coach talks about when he talks about “desire” and “work rate”.

Now, take a minute to let Conor Murray and Johnny Sexton tell you who the man is.

Excellent performance from all of these guys.

I’ll be covering Ireland v Italy and Munster v Zebre in more detail in the GIF Room this week on TRK Premium.