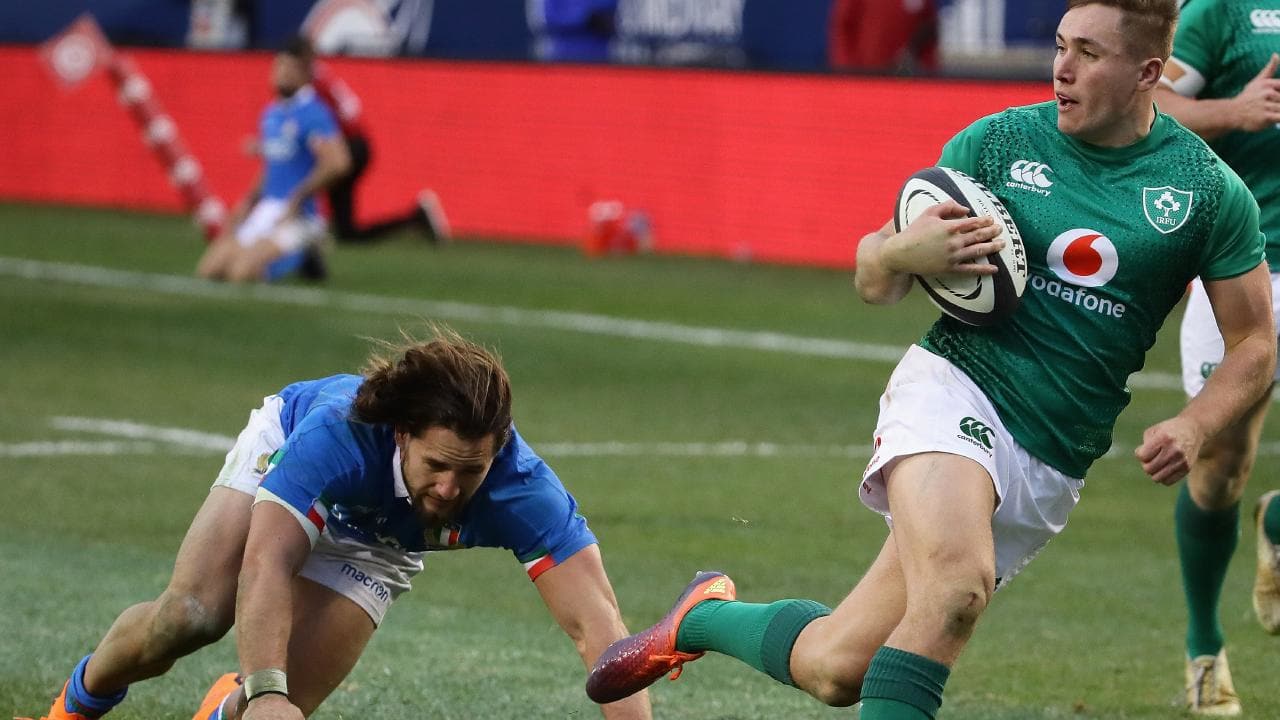 The final score was 54-7 but that’s not really the story here.

Look, Ireland were always likely to win this one – and with a bit to spare – so much of what we were looking for in this game came down to a bit of an X-Factor talent competition. The collective goal was a win, obviously, and that would come but who, in the pursuit of that win, could signal their readiness for further selection? A few did themselves no massive favours but no massive injury either. It didn’t turn into the type of game where guys could play themselves out of contention given the relative comfort of the victory. Those guys will be nervously waiting for Monday’s review. A few, however, will be looking forward to it because they managed to grab a hold of the magical brass ring that turns provincial standouts into test match animals.

But first, let’s get the obvious out of the way.

Italy just weren’t very good here. They had a decent second quarter when Ireland’s singular focus on phase possession retention wavered for a small while in the absence of the kind of control Schmidt probably wanted from halfback but it was a short-lived thing.

That 10 minute period of relative dominance was bookended by massive, unrelenting Irish phase possession. In that regard, Ireland started how they meant to continue by holding onto the ball for 13 phases and 90 seconds. Italy were pulled out of shape and punished in defence again and again. It almost ended with a Ringrose score off one of Tadhg Beirne’s many effective ball carries; 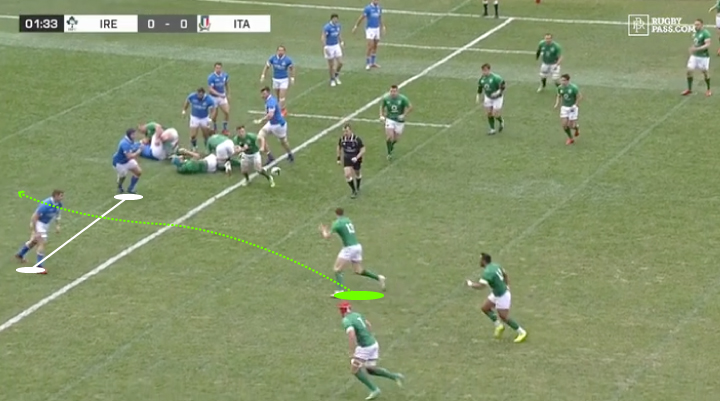 That kind of alignment – a runner like Ringrose attacking a jagged, loosely spaced pillar alignment of a prop and a blindside flanker – doesn’t happen by accident. It happens when the opposition has to defend multiple phases in quick succession with little reprieve. It’s this percussive phase play that forces the opposition ceding ground and opportunity to Ireland’s elusive runners. The bludgeon makes the space for the rapier to bite in Schmidt’s phase system and his squad executed it all but perfectly here.

Not all phase play is created equally though. Look at Ireland’s defensive integrity after 13 phases of defence off an Italian lineout. 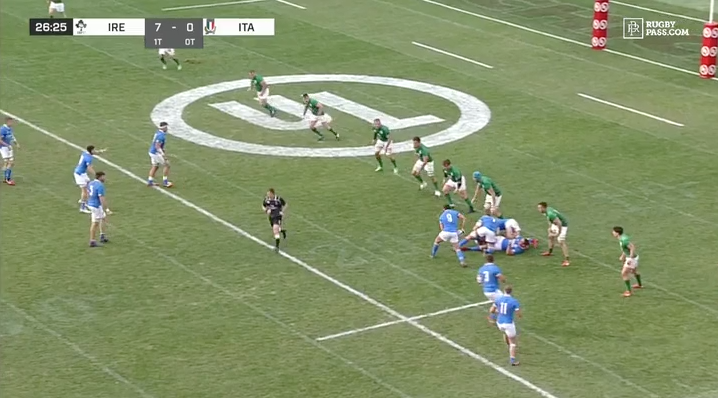 Excellent line integrity, good alignment, good line speed. Ireland would go onto defend Italy for 30 phases in this sequence, with Ruddock finally forcing the spill under the shadow of our posts. That kind of defensive work saps the legs and morale of the opposition. A few minutes later, Larmour would slice open the Italians, who were already starting to look a little leggy from their exploits a few minutes prior.

Italy would score late in the half courtesy of an intercept by Campagnaro. He read an Irish ruck scheme excellently and got the reward. We’ve used this a few times over the year with the fullback hitting the space left by the drifting pillars at the ruck – normally this is Murray, O’Mahony, Kearney – but it wasn’t to be here.

Good read from the Italian captain.

That left the halftime picture as 14-7, which wasn’t really a reflection of the game as it stood. Italy had two or three series of possession that Ireland repelled and the only score credited to the Italians was gifted to them by some over-elaborate Irish ruck work. Ireland’s work in the first half had been pretty good execution wise for the most part but I thought that we were let down at key points by the halfback pairing.

Carbery and McGrath had very mixed games. Both had good moments – Carbery’s kicking, reset work and handling, McGrath’s support work, try and his positioning –  but they didn’t really control the opening 40 as they might have liked. Patience seemed to be the biggest issue for both men – too much patience for McGrath at the base of the ruck and too little for Carbery who was a little bit loose, overambitious and tended to work a little too predictably from behind the screen.

It’s a small thing but it won’t have gone unnoticed. Both men did well in other facets, and the phase play they stitched together in the first 40 more than paid off later, but they had their issues.

The second half was a cake walk. Ireland battered Italy early and kept at it. Tadhg Beirne scored his second try of the game off a line so hard you could scratch a drawing of his face onto a diamond with it.

Larmour scored an intercept that was a try the minute it touched his hands on his own 10m line.

And that was all she wrote. The only question then was “how many would Ireland score?” The answer to that question would “8 in total”. It was easy in the end, to the point that taking too much from this game becomes pointless. Italy showed up relatively weak, got pumped by a very efficient Ireland side, end of story.

So what did Ireland learn here?

That we’ve got a very effective second layer that can easily dispose of Italy’s second layer. I mean, we already knew that so what else? We learned that Schmidt’s system permeates deep down the depth chart to the point that everyone likely to take the field for Ireland under most circumstances can be expected to execute it.

As for the individuals, we learned that Beirne, Van Der Flier, Conan, Ringrose and Jordan Larmour are ready to roll as the bigger fish come around the river bend this November. Are they All Black Ready? That remains to be seen but on the evidence here, all have way more levels to go to.

Garry Ringrose was just outstanding. If he finished off the chance inside the first two minutes, he probably walks away with five stars here but he was almost perfect in every other regard. His defensive position is almost impeccable, his passing and line taking is smooth as you’d like and he’s got the pace and footwork to trouble absolutely anyone in the game. My first choice #13 going into the All Black game. A Rolls Royce of a player.

I thought Josh Van Der Flier and Jack Conan were hugely impressive. Both men never stopped working in defence or at the breakdown. Conan, in particular, had one of his more effective days in a green shirt. We know he can do the extras but this game showed he could bring solid defence and breakdown work on both sides of the ball. Good stuff.

I thought Quinn Roux, Niall Scannell, Sean Cronin, Dave Kilcoyne and Finlay Bealham had a really effective days work too. The latter three had a really good day out scrummaging against a tiring Italian pack and even managed to get the Pack Pump Special – a scrum penalty against the head followed by a maul over try.

Tadhg Beirne picked up five stars on his test debut, as you’d expect. He’s the type of guy that could be asked to land a plane in the aftermath of a pilot heart attack and he’d manage to land it with one hand while parallel parking it into the hangar.

Physical stuff? He’s got that.

Lineout basics? He’s got those, too. Ball carrying? He’s at the point where his timing is so good arriving onto the ball that he might as well be Billy Vunipola wearing a suit of armour when he hits the gain line.

He scored two tries, carried excellently, stole a lineout, and generally looked like a guy who was starting his 50th test, not his first. A superstar. ★★★★★

He had no right to score that try from just outside the Irish 22. He just didn’t. He beat four guys without running over the top of them – he beat them with his feet, pace and acceleration. A hat-trick and an assist on the day were about as good as you could want for a guy that some were trying to convince themselves wasn’t even a fullback a year ago while trying to reason out why Carbery should be backing up Kearney there for Leinster instead of starting for Munster. You’d say something if Larmour was all flash but his basics are really good too – he’s got a monster boot on him, his positioning is coming along with every game and he runs excellent support lines as well as strike lines.

Jordan Larmour has the type of talent that doesn’t come around very often and, for me, it’s only a matter of time before the Irish #15 shirt is his to lose. He was the star of the show here and had the kind of test match start that you’d dream of having as a young fella. Larmour was electric, unstoppable and borderline unplayable. An icon in the making ★★★★★

There’s much to cover in this game and I’ll be doing that in TRK Premium all week long with GIF and Video Articles. Be sure to check out the Post Match Wallycast on Monday.