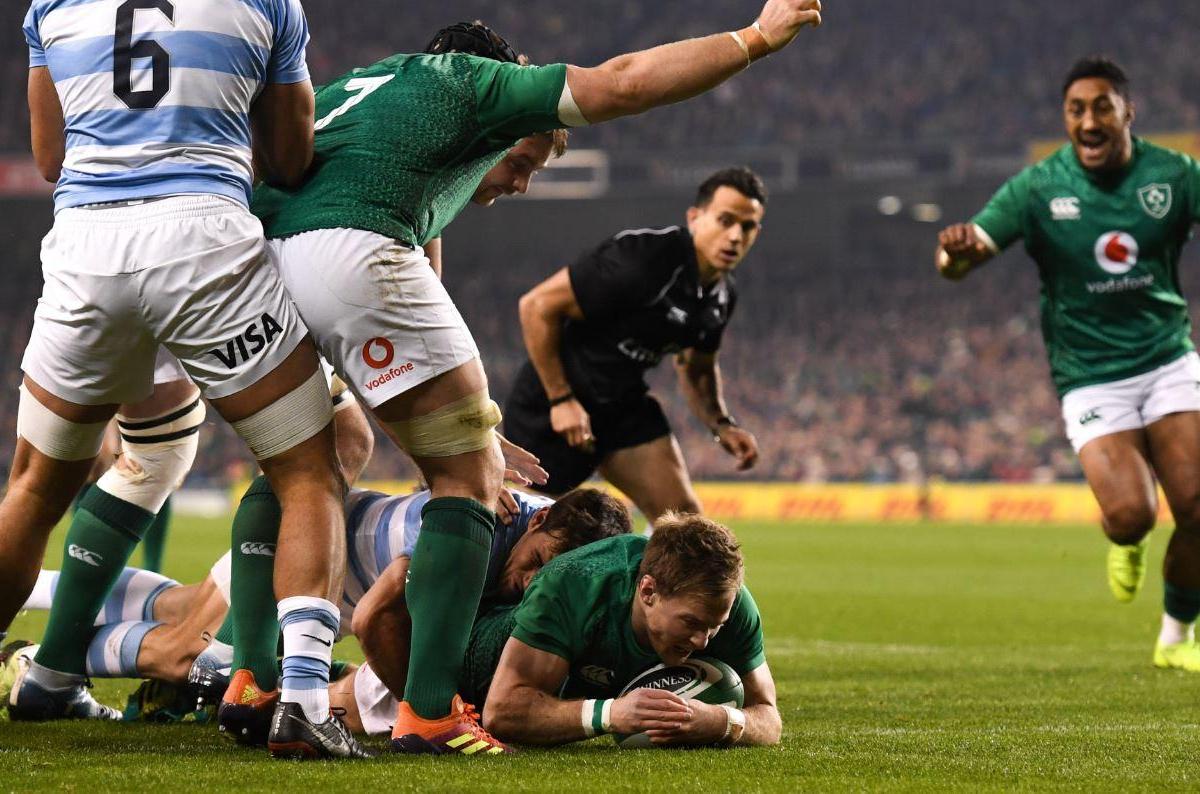 It’s a testament to Ireland’s current standing in World Rugby that they can play quite poorly against a massively underrated Argentinian side and still win by 11 points while controlling most of this game outside the first quarter.

Don’t get me wrong, this isn’t a ballad about how Ireland were actually superb here. The evidence of your own eyes will tell you that there were issues aplenty from our phase play to our lineout work but it shows the level of expectation there is around the Irish national team in 2018. It isn’t enough to beat a dangerous Los Pumas side pulling up after a stop-start, bitty performance – that just isn’t very cash money for Irish fans these days. And rightly so.

As I wrote pre-game, this 80 minutes was a clear clash of rugby styles. Argentina, if they were going to be successful, would have to withstand a lot of heavy forward pressure up the middle of the pitch. Ireland would be looking to repeatedly hit Argentina’s narrow defensive line which, in turn, would create workable space for the likes of Addison, Earls, Stockdale and Larmour to attack. The Pumas would have to repel this forward pressure while making sure they didn’t overfold to one side of the ruck or overcommit on their blitz in each defensive phase while also scrambling wide onto Ireland’s attempts to find their edge. The Pumas did this incredibly well for much of the game.

Their narrow cluster of centre-field forward defenders had to repel Ireland’s tight, three-man carry pods while their mobile midfield and back row tracked and scrambled Ireland’s attempts to hit the edge.

Watch the way that blue #14 comes up and closes the door on this break once it looks like the play is going beyond blue #12. Ireland made ground through Larmour who, in fairness, could probably make ground on a sumo wrestler in a phone box. When the play resets, look at how Argentina structured themselves after the ruck and then after each subsequent ruck;

Tight, controlled alignments with everyone from the centre on out to the edge and backfield knowing their role. They were excellent.

Admittedly, Ireland didn’t help matters with some uncharacteristic decision making on phase play. Even on that last GIF, you can see Sexton making a decision to carry on an openside play rather than release the ball to Aki/Addison/O’Mahony. 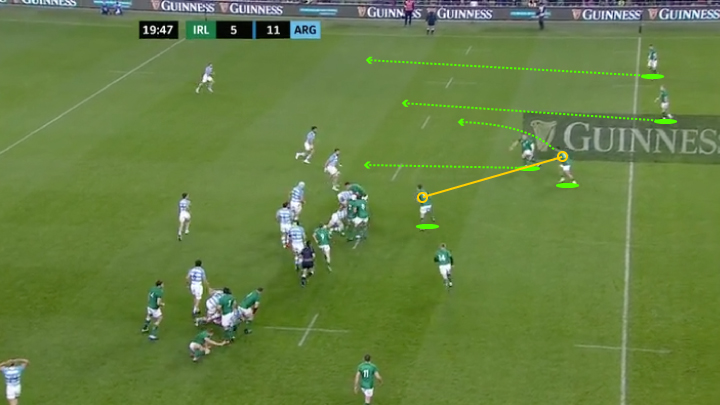 He carried around the edge but, even if he’d released the ball wide, it’s hard to know whether or not the Pumas would have tracked down the runners. The quality of the Pumas’ scramble out wide when Ireland stitched play to create an opportunity made things difficult.

Here’s another example. Some superb hands from Sexton to Furlong to Stockdale put the ball to O’Mahony in space with Earls outside him;

O’Mahony decided to kick through – and it was a good kick – but he was pressured into that option by the presence of Orlando closing the gap in front of him, Boffelli getting angled up on Earls and the covering Delguy tracking in the backfield.

Despite conceding three tries, this was a good defensive performance from the Pumas and Ireland will need something better against the All Blacks. Argentina didn’t stress Ireland on their phase play either it must be said – they were much more dangerous off the scrum, lineout and restart – but Ireland will be focusing on the negatives this week. It’ll sharpen them up for what’s to come.

With phase play working itself to a stalemate, this became a battle of the set piece. The scrum was a decisive win for Ireland and a real feather in the cap of the pack and Greg Feek.

Argentina’ “bajada” scrum bind, described at length here, puts a lot of focus on attacking through and on the hooker. The entire bind structure – second rows with their arms over the flanker rather than through the leg of the prop – is built to drive pressure up through Creevy and onto Best. Ireland seemed to crack this scrum problem by going around it. If Creevy was going to have a lot of forward pressure, Ireland would use Furlong to attack him laterally by powering through Garcia Botta while Healy would work on separating Medrano on the loosehead side. I spoke pre-game of Cian Healy possibly bossing Medrano in the scrum and that certainly played out.

Healy butchered Medrano on this scrum took against the head and it’s a good picture on how the scrums went in this game. Ireland won multiple penalties and scored two tries directly off the back of dominant scrums.

The decisive try came from another massive scrum win. Furlong folded Pablo Zeiss up, Argentina collapsed and then Ireland swung around to create a massive angle for McGrath to work with while pinning most of the Puma pack to the floor.

Matera had to come hard off the flank of the scrum but Ireland had two men over and a massive angle to work with. McGrath caught him on the inside shoulder and Ireland were all but home and hosed.

The lineout was a different story. Here, Ireland were hesitant and looked to be playing to avoid the Argentinian counter jumpers. Here’s a good example;

This scheme had two feints on Stander’s lift – one for Henderson, one for O’Mahony and then onto Ryan. The only problem was, Argentina weren’t looking at the feints they were looking at Best’s throw. Our timing needs on this scheme were such that Argentina were able to beat us into the air and, ultimately, steal the ball.

Best’s throwing wasn’t great, for sure, but the calls put pressure on that throwing. Our schemes were quite complex even when they didn’t require big timed throws to the tail. Look at this one;

A shift-maul with a swivel pass option to Stockdale on the loop from the front of the lineout! I think it’s a swivel option because of how open O’Brien is at the back of the second maul is. It would have been unreal if it had come off because the play narrowed in Creevy and Medrano at the tail as planned and would have given Stockdale a good look at that space outside of the Argentinan hooker. But the handling wasn’t up to it.

Our calls simplified when Toner came on later in the game and that did the job at the time. Our throwing will need to be much, much better against the All Blacks but that’s not telling you anything you don’t already know.

Look, Ireland weren’t even close to their best here but that was still good enough to beat a Pumas side that played some excellent defensive rugby and looked dangerous in transition, as expected. There’s lots of work to do, yes, but there always is when the All Blacks come to town.

I thought Jordan Larmour had a much tougher time in this game. He was targeted a few times in the air and looked a little off positionally. A tough day at the office but he’s the coming man in the back three. The experience will stand to him.

On the positive end, I thought James Ryan was outstanding again. His athleticism is really something to behold in all aspects of second-row play. He’s an excellent scrummager, a superb maul defender and a physical freak on both sides of the ball in phase play.

Peter O’Mahony had another quality outing. His defensive lineout work only came to the fore late in the game but boy did it pay off. Ireland would score a try a few minutes later. He was a nightmare for Argentina on the floor, carried the ball reliably and was superb in the defensive and offensive maul. He’s playing some excellent rugby right now.

I was hugely impressed with Dan Leavy’s outing off the bench in place of the luckless Sean O’Brien. Leavy was his usual barbarian self and, much like Marv from Sin City, Leavy looks like a guy born into the wrong time on the rugby pitch. He looks like he’d be much more at home swinging an axe around some medieval battlefield but, for now, we’ll count ourselves lucky that he’s cracking ribcages and stealing ball in a green jersey instead. Looks a cert to feature in some for next week.

I thought Bundee Aki had a really good game. He was extremely physical on both sides of the ball and took his try well. He’s a really important part of Ireland’s midfield mix.

My man of the match was CJ Stander. His work rate on both sides of the ball and in the breakdown was immense, and the one constant in a game where Ireland were up and down in equal measure. This was a performance of the highest quality against a side that were fronting up in the exact area where Stander would be carrying the most. He’s a nailed on part of Ireland’s back row and days like this are an example to point to. Stander’s teak tough and harder than diamond plated tungsten nails.

There’s much to cover in this game and I’ll be doing that in TRK Premium all week long with GIF and Video Articles. Be sure to check out the Post Match Wallycast on Monday.