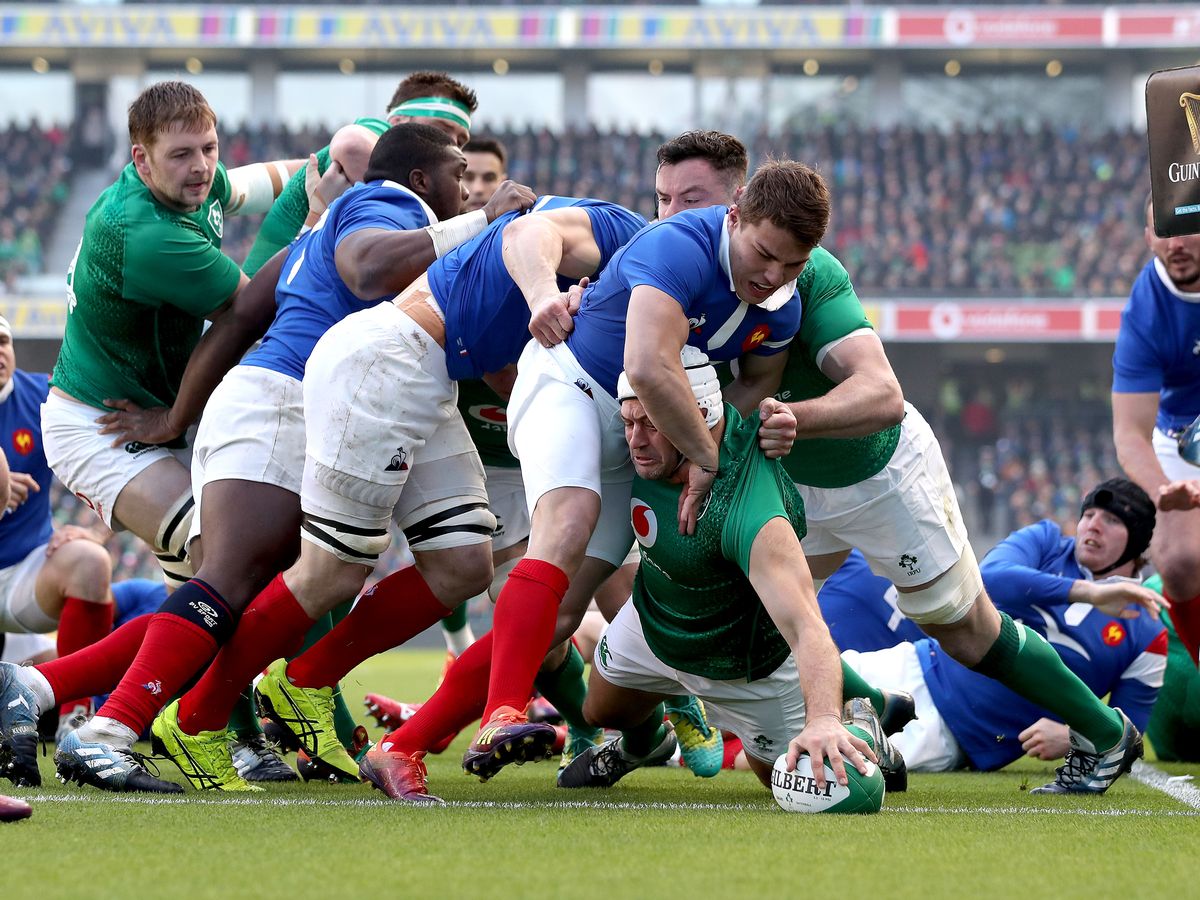 When people look at the scoreline from this game on a Wikipedia crawl in a few years, they might think that this was a relatively closely fought contest.

They will be misinformed.

Ireland’s 12 point winning margin – only two more than the 19-9 win here two years ago, don’t forget – was as close to a twelve point thrashing as you’ll ever see. Had this game finished 26-0, as looked likely with 10 minutes left, I think it’s fair to say that France would have been considered lucky to get the nil. Outside the first few minutes of the second half and that late flurry in garbage time, France showed very, very little here. If their jerseys were of a slightly lighter blue, this performance would probably be used as a further illustration of the need for relegation from the Six Nations but that’s for France to worry about and they have a fair bit of worrying to do, in my opinion. From Ireland’s perspective, this was a game that showed a return to form – not the peak form of last year, but in the ballpark – and a return to the type of game that we know generates results.

In Twickenham last year – Ireland’s best performance in the last 18 months for me, including the All Blacks – Ireland had Furlong, Healy, Henderson, Ryan, Leavy and Stander with Aki in midfield. That’s SIX big carriers in the pack.

Against England this year – the biggest, most physical team we’ll play in this Six Nations in my opinion – we went into the game without Henderson and Leavy, and lost Stander’s full effectiveness due to a broken cheekbone early in the contest. That loss of elite ball carriers would cost us, even with Aki, Healy, Furlong and Ryan in the side.

Against Scotland, we had a decent roster of carriers; Ryan, Furlong, Healy, O’Brien, Farrell, Aki and Conan. Lo and behold, we played better and won comfortably enough away from home.

For this game, Ireland had Henderson, Ryan, Healy, Furlong, Stander and Aki back in the harness and the impact was noticeable. 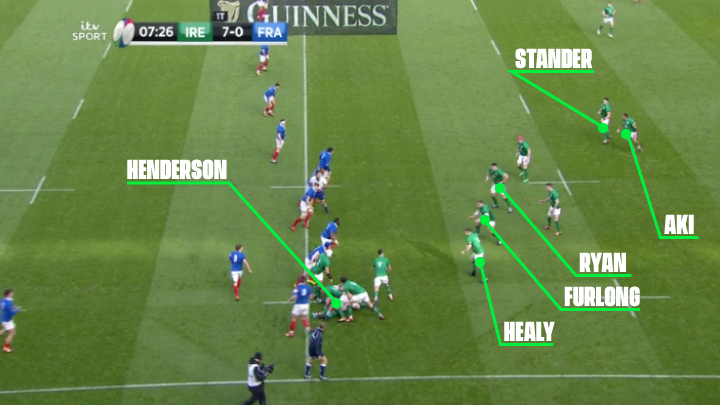 Ireland have multiple options to work with from this position and that’s with Henderson, Best and O’Mahony in the previous ruck.

Look at the French defenders these carriers interest. 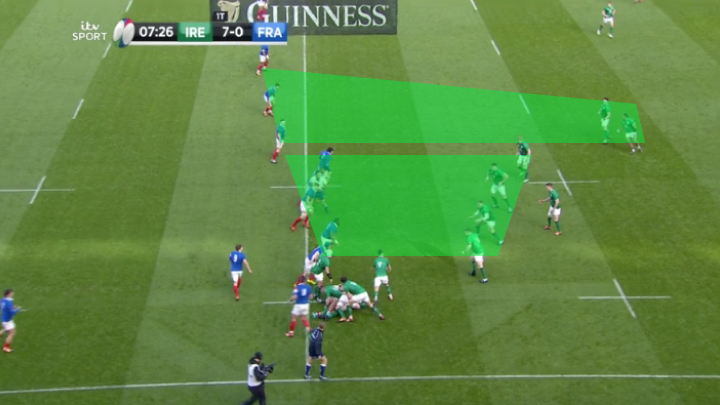 France can’t double up on any one ball carrier because there are too many options for Murray to hit. Murray can play it short to Healy, he can hit Furlong, or he can hit Ryan. Healy has a tip on option to Furlong, Furlong can pull this back to Sexton, who can hit Stander/Aki and Ryan can potentially hinge this ball onto Van Der Flier. And that’s just on this phase.

Let’s see how it plays out – watch for the variations in play as Ireland go through the phases.

See how much smoother Murray and Sexton are when they’ve got high-quality ball and multiple options to work with? Sexton doesn’t have to go right to the gainline on every other phase to generate space. He can run decoy loops and float to the reset point with plenty of time to work with. That variation made it easier for individual forwards to carry the ball and that generated results time after time.

Rory Best’s try inside the first three minutes was a perfect illustration of Ireland’s intent. A close range maul used the French’s lineout/maul defence against them – a trick we’d repeat in the second half.

Ireland used an angled drive to attack the French counter-maul.

Healy stood up Poirot after the lift on Henderson, and then Ireland peeled around the side using Lambey and Vahaamahina’s counter-shove to launch Van Der Flier, Ryan and Best around the side.

Stander does a great job of sticking and binding Guirado on the blindside and that creates the angle for Ryan and Best. Van Der Flier and O’Mahony have an important role too, in that they’re blocking the French defenders coming around from the other side.

It was nicely planned and nicely executed, and the same description applies to Sexton’s try.

Sexton’s try came from a lineout maul in the 30th minute and essentially killed the game off for France. As I wrote pre-game, Ireland were looking to attack the space around Ntamack on set piece and Bastareaud lateral speed in defence in particular. Sexton’s classic wraparound move is perfect for that particular task.

Aki’s line on Ntamack holds Bastareaud in, Ringrose’s line draws in Fickou, and Larmour pulls in Huget. Once Ringrose pops the ball back around to Sexton, he has all the space he’d need to kill the game off.

Earls try in the second half added the bonus and it, once again, hit the French in-field defence off the lineout. 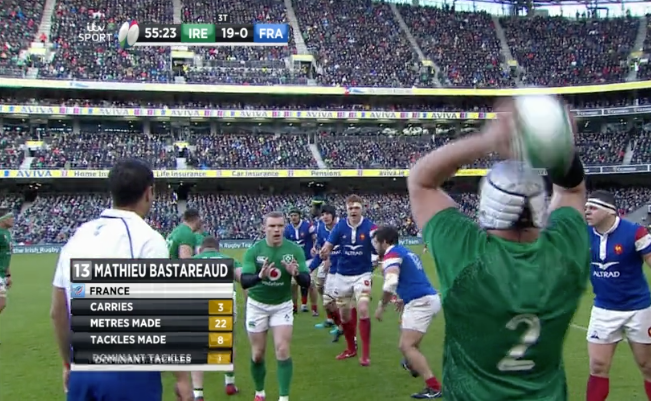 … not get used and then amble around the back of the maul formed in the aftermath. Ireland mauled, drew the French overload shove on one side, just like the first try, and then sealed off the French defenders to isolate Picamoles and the covering prop Bamba. That created a “wall” of Irish players that would prevent the rest of the French pack from coming across. 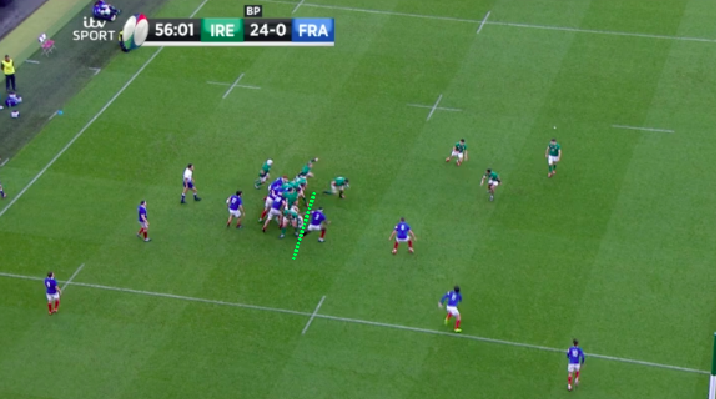 Stander angled out on Picamoles, drew Bamba across and then hit Earls on the inside shoulder for a clean linebreak and try.

But that wasn’t all – Ireland had targeted the particular way that France use Huget in these positions.

Picamoles’ position off the maul was as cover against Stander and insurance against any pass to Aki.

Huget was defending the #10 channel while Dupont covered the wing. Aki’s decoy line off Stander drew Huget up into the line and meant that Earls would have a clean run at the tryline with no cover close by. 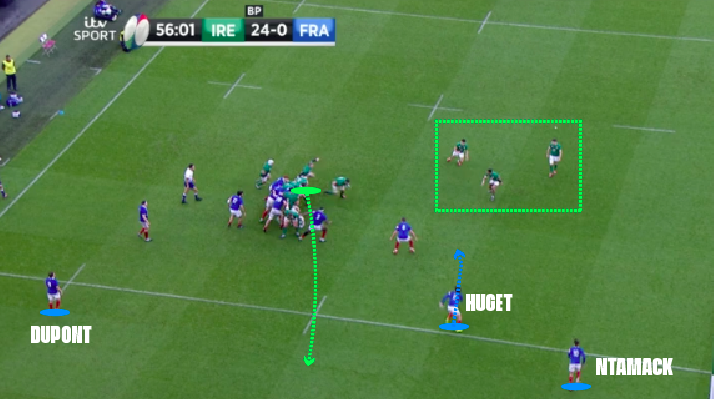 Look how it plays out;

Ireland would have seen the way that Huget acted in these positions against Scotland a few weeks back and designed the play around that tendency. You would have seen it on TRK Premium too.

Here’s Huget standing in-field against Scotland with Picamoles as tailgunner and, you guessed it, Bamba as the last forward in the line. 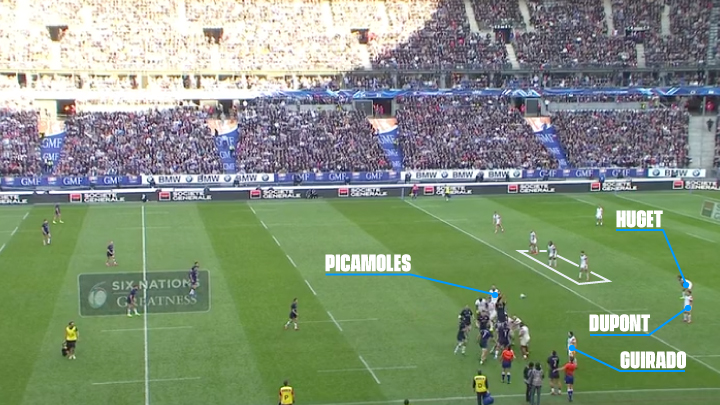 With that, the game was over. Ireland hauled the halfbacks off, changed the tight five and coasted to the finish. France scored two tries as the game fizzled out but don’t let the scoreboard fool you. Ireland held France down, took their wallets and threw a few coins for bus fare in the last five minutes. It wasn’t close to the heights Ireland reached in 2018 with regards to quality (England/New Zealand/Australia II & III) but it was more than enough to do the job.

Wales in the Principality Stadium will be a different kettle of fish but anytime you can head into the last day with a Championship possibility (however slim) isn’t a bad thing. We’re not where we want to be yet, but we’re on the right track again as we head to Wales this week and Japan ultimately.