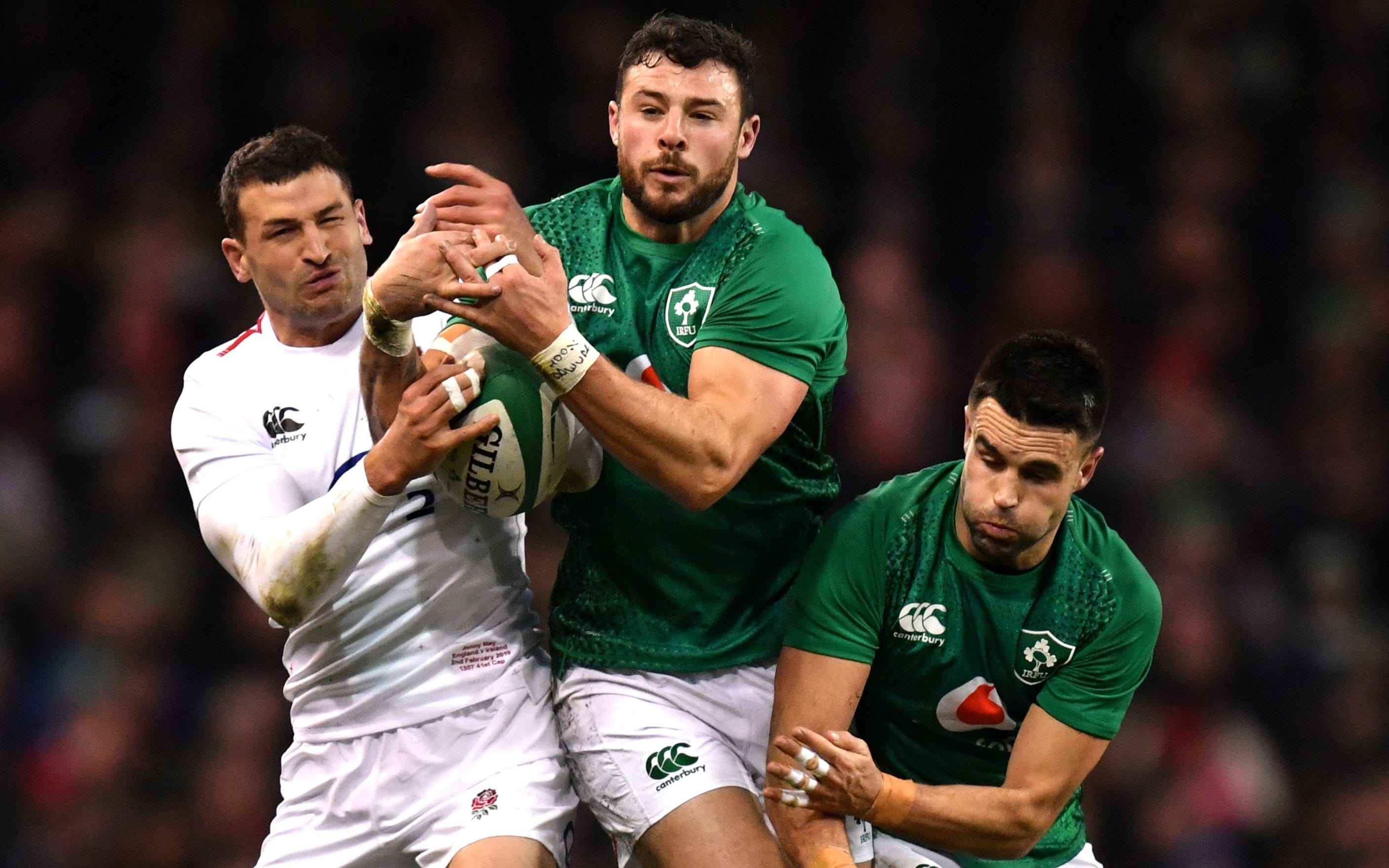 It was chastening enough when it was all said and done.

Seeing Henry Slade steal over with an intercept off a desperate (in both execution and need) Sexton pass deep in his own 22 was the end and it felt like one of those messages the universe gives you when it really wants to hammer home the metaphor. Today Is Absolutely Not Your Day.

As Ireland clustered around the posts in the 75th minute and looked down the barrel of a 17 point home defeat with five minutes left – their first home defeat under Schmidt – the message couldn’t have been clearer. England came with purpose, clarity and the physical combinations that they’ve been looking for for the bones of 18 months.

I wrote before the game that Ireland’s physicality in selection was a bad matchup for England in Twickenham last year and it turned out that the same thing was true in reverse this time around. England had around 40% of the possession in this game, but the possession they did have had a punch to it that Ireland found incredibly difficult to live with.

That was evident inside the first 90 seconds. England went long – and quickly, actually – to Manu Tuilagi off a lineout just inside Ireland’s 10m line. The Leicester man won his collision, presented clean possession and England were away through the phases.

The key to this was clean, quick ball and England got all of that and more. The weaving reverse and counter-reverse switches off that initial ruck narrowed Ireland’s centrefield defence and presented an opportunity for England in the wider channels a phase or two later.

After a strong hit up from Sinkler, England came around the corner with Farrell hinging onto Tuilagi, who hit the line with depth and pace for a dominant collision on Ringrose – something Ireland wanted to avoid if at all possible.

Farrell’s role was important here too as he brought Aki out of the line, squared him up and gave Tuilagi a powerful angle to attack. He provided super clean ball for Youngs, who was able to hit Curry at pace on the next phase and, all of a sudden, England had a big openside to work with inside the Irish 22 and most of their primary heavy ball carriers already resetting across the field.

Dangerous. Ireland’s next hit would have to be a dominant one, but excellent play from Sinkler prevented that. Look at his show and go to George here, and how it stalls Ryan and Stander’s line.

Ryan has to consider the option to George while Stander has Itoje running onto his line of sight too. England get over the gain line with two Irish defenders off feet and yet more clean ruck ball. This was even more dangerous.

From here, England reset again through Nowell and had Tuilagi and Billy Vunipola attacking off a centre-field ruck.

Aki made a good stop on Vunipola but, crucially, it didn’t stop the ball from moving relatively quickly out of a disrupted tackle/ruck situation.

Earls got it in the neck for his hard blitz that made the gap that lead to the try but, when we look in context, we can’t be too harsh. Well, you can be if you want, but look at this first 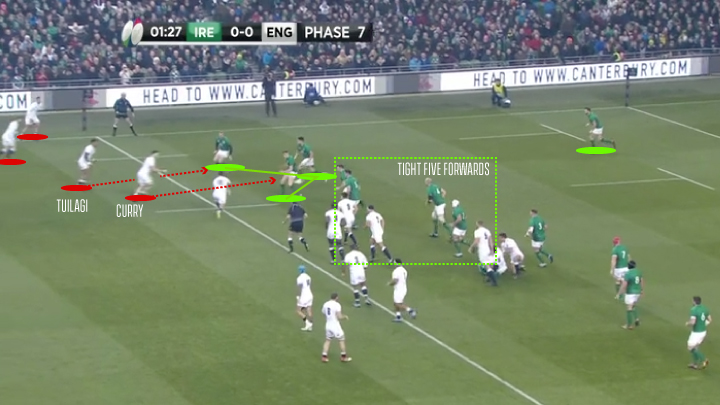 The pace of England’s recycling and the structure that their big carriers gave them meant that they had a 4-3 overlap on the blindside of the centre-field tackle/ruck created by Vunipola. The tight five forwards were bypassed by Youngs’ pass to Farrell, so they were a non-factor as this played out. Curry and Tuilagi were compressing Ringrose and Murray and, with their relative depth, Earls was in a bit of a no-win situation. England have all the cards here. If Farrell hits Curry or Tuilagi, they’re going to make big gain line with the momentum and angle they have on Murray and Ringrose. Earls can’t stray too far from the edge with those two hitters but he’s also got May and Daly on the touchline.

Farrell has six options to work with. Carry himself, hit Curry or Tuilagi, or go for a longer range pass to Daly or May, or kick through into the space behind Ireland’s defensive line. 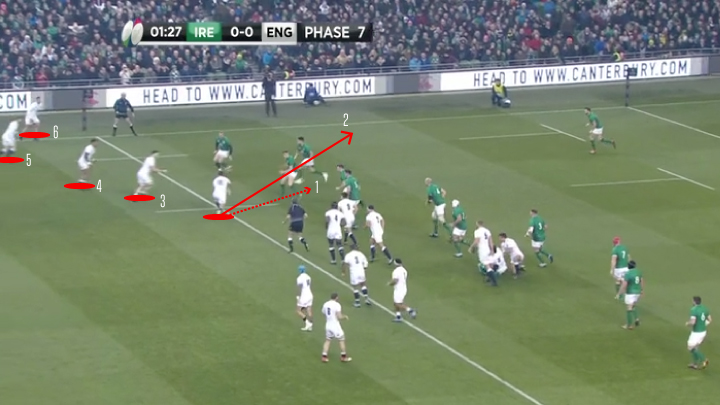 Was Henshaw a little too deep on this play? For me, yes, a small bit. That made England’s options pretty much foolproof as long as the execution was good. Earls stepped up into the passing lane to try to proactively attack this situation but got beaten by the speed of Farrell’s pass. 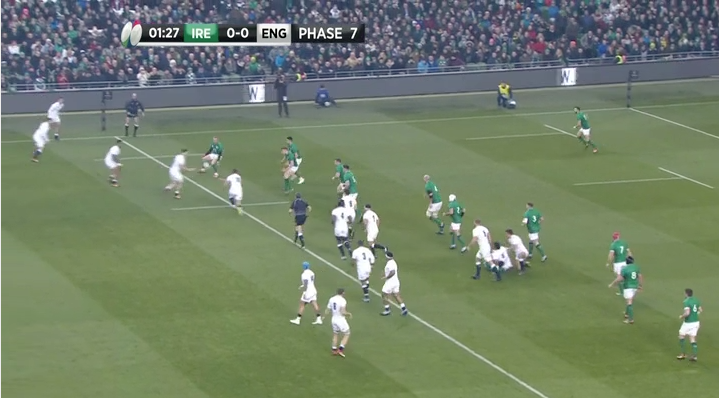 When you step up into the lane and don’t get the ball, you’re always taking the heat but I think England were scoring here regardless. They had too much momentum, too many excellent options and plenty of big runners on the reset if we managed to stop them on this phase. It was an excellently constructed try.

It was a massive moment for England just 90 seconds into the game and put Ireland on the back foot immediately.

Ireland responded well enough with a penalty and a nicely taken 5m lineout drive but it was hard going through a physical and aggressive English defence that was pushing the boundaries of offside but that’s how you win big games like this.

England were strong and in numbers in the tackle and heavy over the breakdown, which slowed Ireland’s recycle.

On the first pass to Furlong, I think Best and Toner are off the pace with their running as a potential tip on or pass option so England can cluster on Furlong, stop him and slow him. We lose three men to the ruck and when you look at our options thereafter, Bundee is passing to a two forward pod in midfield with Sexton as a slide option and Van Der Flier on the border of the Strike and Run Zone where he does his best work.

This is where Ireland missed the heavy ball carrying of Henderson and Leavy. We were a little too stretched on this play from the minute we hit the openside on phase seven and I think we went wide too quick. 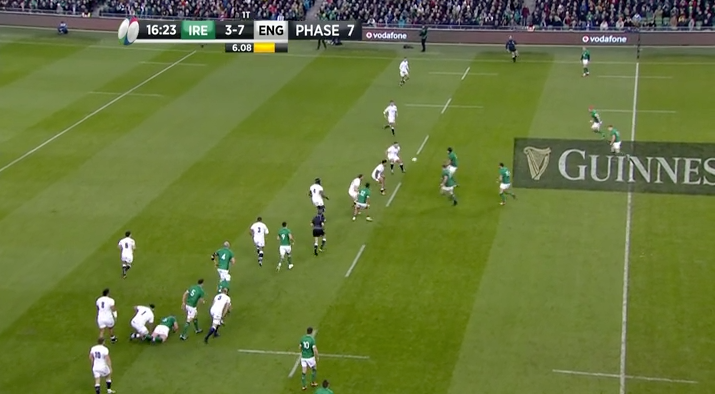 This looks like a miscommunication, a poor pass, or maybe Stander just blew the pass – we’ll give him a break on that if so given he had a broken cheekbone and eye socket on his left side – but either way when the ball bounced out to Van Der Flier we weren’t in control of the possession. That is unlike Ireland but it was forced due to a lack of ball-carrying options in the forward exchanges, in my opinion.

When you’re losing collisions, you want to try and release the pressure through box kicking but we didn’t get our usual return there either. The logic behind this is pretty simple – if you’re finding the going through phase play tough, then you box kick to either win possession 10/15m down the field or you force a transition event where the opposition might kick the ball back to you in an advantageous position or force them to kick the ball out so you get a lineout.

England did a good job of blocking our chasing lanes from our first real possession. Here’s an excellent example.

Three English blockers congeal in front of May and make it impossible for Earls (or any other chaser) to get height or pace on an attack line. This is a particular blind spot for the ever more tired and disinterested looking Jerome Garces, who took a similar approach during the Heineken Cup for Munster’s games against Exeter, and England took excellent advantage here.

England, on the other hand, found a lot of joy from attacking the positioning of Henshaw and the relative positioning of Ireland’s wingers to Henshaw. They wanted to rough up Earls under the high ball and, if they couldn’t claim it in the air, they wanted May (or others) working a physicality mismatch in a prone position.

This is a good example of what England were trying to do and how Ireland tried to avoid it.

Curry saw yellow for a late shot in a similar circumstance and Itoje might have seen the same for a dangerous challenge in the air. The plan was deliberate. Attack Earls as he tracks back out of the line defensive line on phase play and then use the space between Henshaw and himself to isolate the smaller winger so he can be pressured into possession or be bundled into touch.

There were a few kicks Robbie should have maybe left or, if he came for them, ensured the ball stopped where it was.

The above is a good example of how that decision-making process in Ireland’s kick defence system is really important and how one decision can stress it.

England also did a good job attacking Henshaw laterally with angled kicks behind the defensive line.

This one put Henshaw’s left-sided exit under huge pressure and you can see how uncomfortable Henshaw was as he set to kick. England would score a few minutes later after they moved Henshaw out of position as he tracked Farrell across the pitch off the resulting lineout from his previous exit.

You can see the overload here. 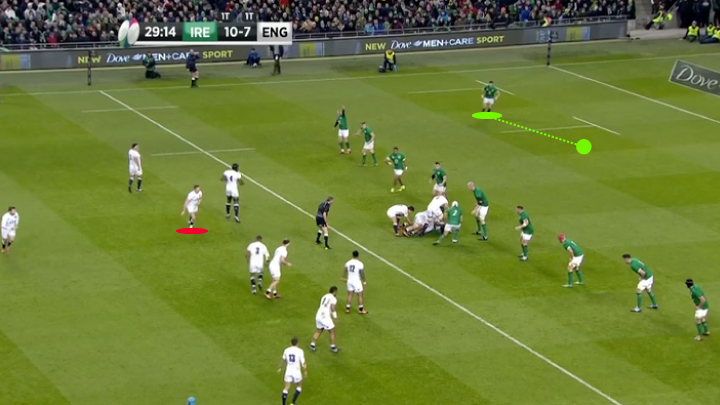 Henshaw has overrun the kick line and when Farrell moves back towards the openside off the centre-field ruck, Stockdale has a world of backfield defence to cover. Henshaw, in my opinion, should have been 10m further infield to allow himself that time to cover back across. Instead, you can see how hard he has to work to come back and cover the space.

The bounce is a killer for Stockdale and it’s an excellent kick through from Daly but that 10m at the start would probably see Rob Kearney contesting with Daly after the mistake, rather than watching him dot it down.

It’s harsh on Henshaw but he hasn’t played at fullback at this level. An excellent kicking performance from England would have stressed an operator like Kearney so Henshaw was really under the pump here early and while I’ve rated him lowly, I am aware of the pressure he was under in that position. He could well make an excellent fullback but he struggled badly here.

England had a kicking outlet and phase pressure. Ireland didn’t get that. The halfbacks were working with slow ball and less carrying options and the box kicking route wasn’t getting the reward. When that happens, you usually lose unless you can get a few breaks here and there and Ireland didn’t get those either.

It was a bad loss in the end but the elements that were wrong are fixable. England are a very good side and when they’re as close to full strength as they were here, they are very difficult to stop unless you are equally stacked to match them. England, when they are stacked like this, need to be matched body for body in the pack and we just didn’t have the big hitters today to work in tandem – it’s not just about one guy, it’s about how many guys you can array – to hurt England and isolate their defenders. In some ways, this result and the scoreboard might sink some of the opposition pressure a small bit as England are now the team to beat in Europe after this win but no one will be smirking in training this week. Ireland were physically outmatched and tactically outmanoeuvred. The loss is in the books – now it’s all about the response.