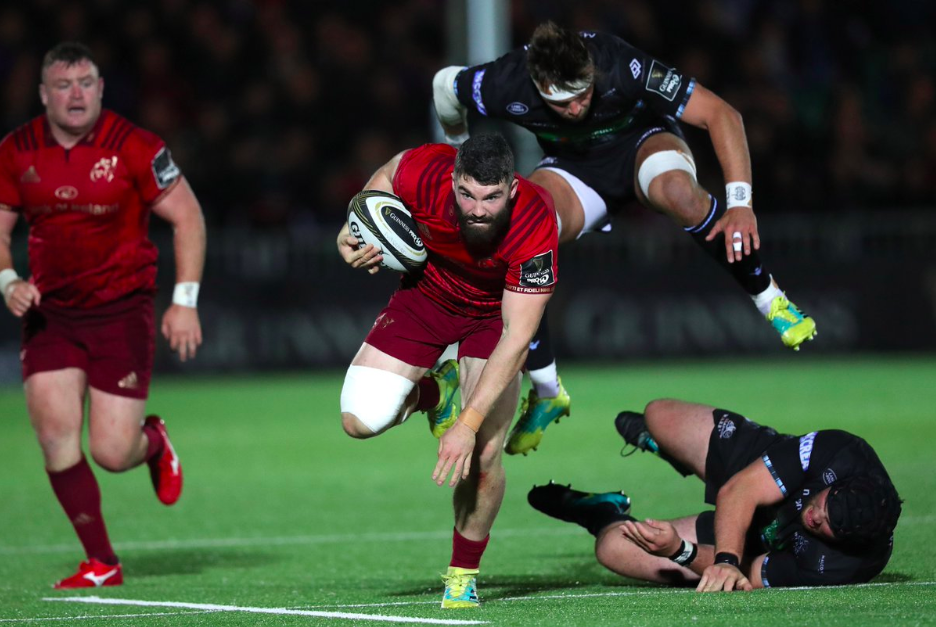 If you want to beat Glasgow in Scotstoun, you need two things – territory and possession.

You need points on the board too, obviously, but that’s a given. Munster didn’t have much territory or possession – at one point running 18% of the former and 17% of the latter –  when this game was being decided in the opening 36 minutes at Scotstoun on Friday evening. Three tries were conceded, along with 22 points and that would be the game, bar a wind-assisted miracle in the second half.

Cause for panic? No.

Just like last weekend’s win against the Cheetahs wasn’t the sign of a coming Munster hegemony, this defeat – painful, you could say – isn’t the harbinger of doom that some might think. I mean, it wasn’t last season, when we lost the same fixture 37-10, and it won’t make much of a long-term dent this season either. Well, bar a fairly grim review on Monday morning.

So how did this defeat happen? Having watched the game back, I can see two main areas of contention that defined the first half.

The scrum will be somewhat contentious from a Munster POV. This one, in the aftermath of a kick that ran dead from Stuart Hogg, was a good attacking platform for Munster inside the Glasgow half, where we had spent scant time since kickoff.

Here’s how it went down;

Now, for me, Fraser Brown and Oli Kebble are going straight up and around here but the referee Ben Whitehouse Jnr. saw it as Glasgow dominance on the loosehead side. Long story short, a good Munster attacking position became a 40m gain for the Warriors off Hogg’s boot.

This was the story of the half.

This one, after Glasgow’s first try and on their put in, seems to shear off diagonally but the picture was set.

Even on the scrums that didn’t get pinged, our platform there was constantly shifting as Glasgow went through the hooker and tighthead. What charges Botha managed off the back of the scrum were decent in that context, but they were a sign of trouble up front and prevented Munster from establishing field position or possession structures that might have eased the pressure.

Glasgow had dominance, were painting the better picture for Junior, and were reaping the rewards with booming penalty lineout gains deep into Munster territory. If you have to defend that kind of possession for long enough, cracks will show – especially on a pitch like Scotstoun with the pace Glasgow like to play at.

That said, I felt our midfield defence was quite good outside the gains Whitehouse’s whistle gave to the Warriors and the first half penalty count – 6 to 1 in Glasgow’s favour – will be a key point for Munster’s work this coming week. Scrum discipline, as ever, will be key to managing our possession and territory needs.

We didn’t help ourselves with our work with the ball in hand in the first half. Our rucking was mistimed and our phase spacing – the lateral distance between them – meant we lost possession in contact or on the floor all too often.

Some of this came down to good jackaling from Glasgow, but some of it was from poor decision making from halfback.

You can get why Hanrahan had a cut off this one – he was going after Glasgow’s soft A/B/C blitz – but the picture outside him meant that unless he beat the defender, he was in big danger of getting turned over on the floor.

Should Ryan have cleaned out this ruck? Possibly – but he was under pressure to make the lateral and north/south distance up against two tackling forwards. Glasgow would turn the ball over and score on the same possession a few phases later.

Throw in a few other transition events – knock-ons, kick transitions, charged down kicks, fumbles on our own goal line and a lineout that generated scrappy possession – all while conceding scrum penalty and you have got a recipe for why Munster found themselves 22 points down at halftime.

With no multi-phase possession and very little set piece platform, Munster were limited to a few cuts off Glasgow on transition.

The second half saw an improvement in a few facets of the game. Our scrum improved without achieving dominance and our phase play improved with the arrival of Carbery. The lineout remained a concern for the rest of the half and was a key part in making the LBP a real struggle in the last twenty.

We began to find a bit of joy in and around Glasgow’s A/B/C soft blitz;

But we were let down by handling errors at key junctions, especially on a 21 phase 5m attacking sequence.

The frustrating thing here was that we’d finally managed to work a bit of separation on that last ruck prior to the knock-on, so having a cut off the Glasgow fringe defence was a real possibility.

I also felt we didn’t really help ourselves with some of the decisions from #9 at multiple points in the game. This is one example of a pass from the base sucking the momentum out of a good attacking sequence to that point.

It’s a small thing but it highlights some of the inaccuracies that plagued this performance. The space we made for Daly and the structure before that was pretty good but the reset speed of Carbery was wasted by the pass execution. We’ll need to be better with our consistency of passing, especially with Murray out for the next while.

This game was a picture of early season mishmash. Given the relative strength of Glasgow’s selection, Munster needed fluency, control and quality to get the job done here, along with the rub of the green from the referee on occasion.

We didn’t get any of the three, bar the injection of quality off the bench, but that was a little too late to stem the damage.

Adding Cloete, Stander, O’Mahony, Scannell, Earls, Conway and Farrell to this starting XV, along with Carbery and Beirne from the start, and you have got a different scenario – probably – but without a properly functioning scrum and lineout, we would suffer regardless of the names in or out.

Johann Van Graan looked extremely frustrated in the aftermath of this one, and for good reason. Munster’s away form was a real disappointment last season and they’ll have backed themselves to at least get a losing bonus point here. That Glasgow didn’t manage a bonus point of their own is some consolation in the grand scheme of things but the main lessons here will be scrum, lineout, breakdown, and in that order.

Nothing to panic about, but only if the bruises taken here are learned from.

The Wally Ratings: Glasgow (a)

Not many standouts here, but I thought Jean Kleyn was immense again here. He had one bad spill of possession but carried well overall and made 19 tackles.

Arno Botha didn’t get much of a platform to run off the base of the scrum but worked incredibly hard in defence for the entire 80 minutes.

Joey Carbery and Tadhg Beirne added real quality off the bench and made serious cases to start next week on the back of their work here.