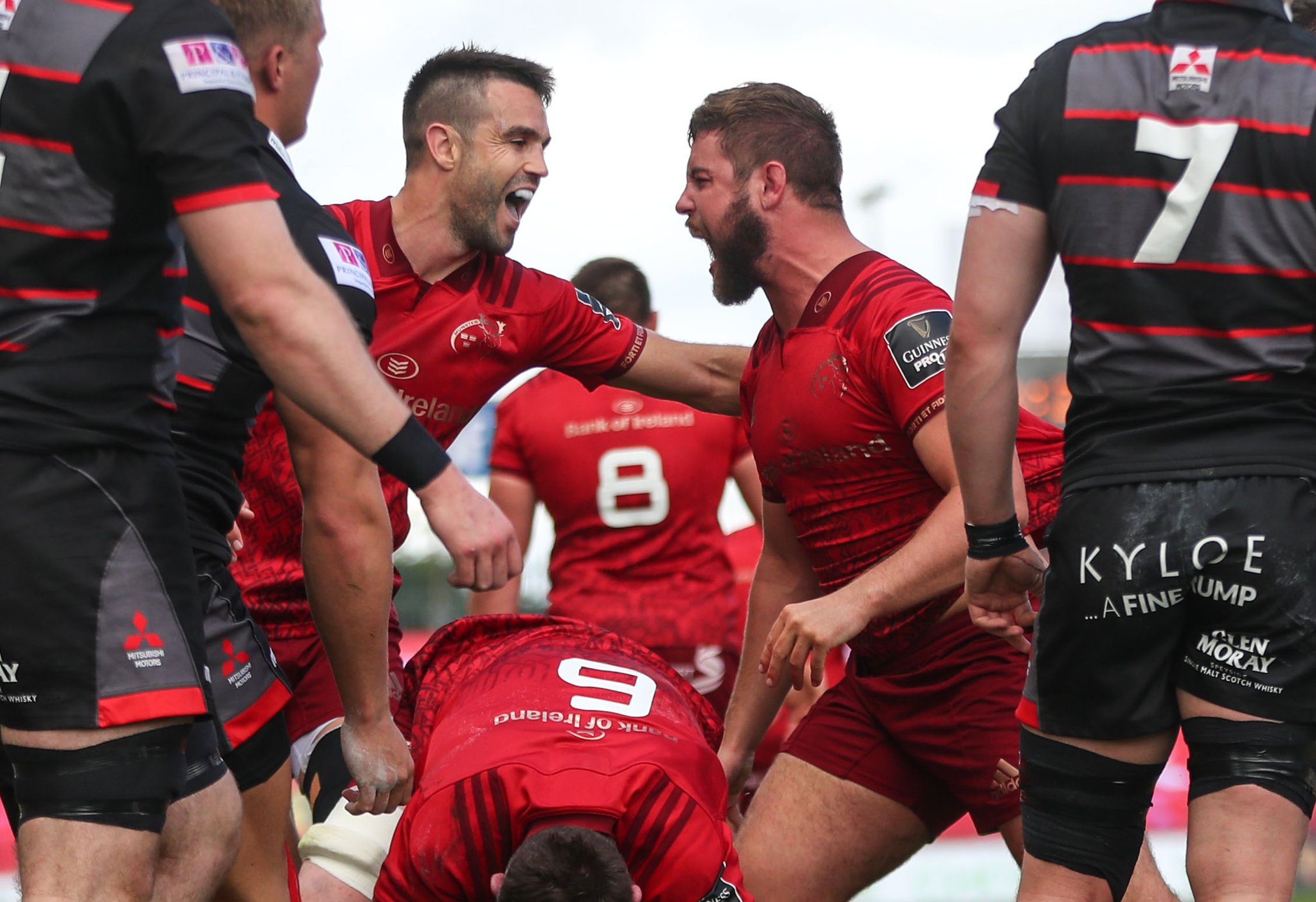 The goal of knockout rugby isn’t to entertain, it’s to progress.

In this regard, Munster were incredibly successful. When the final whistle went in this game – thanks to a classic, vintage Peter O’Mahony lineout steal – the scoreboard confirmed that Munster had made it to a semi-final against Leinster in the RDS but if we want to have any hopes of going any farther, we’ll need to produce an awful lot better than what we saw here.

That’s not a Dunphyesque “tell it like it is” excoriation. That’s a paraphrasing of Peter O’Mahony post-game;

If Munster are to get another game in this PRO14 finals series beyond a semi-final in the RDS in two weeks time, they’ll have to play better than we saw in this game. That need to perform better against Leinster shouldn’t be taken as a tacit slight at Edinburgh either because I think they’re a side that is currently in transition from being a non-entity in the PRO14 to an entity worthy of respect based on their excellent performance over the course of this season. Think about the way Glasgow were perceived in, say, 2009/2010/2011 and compare it to how they’re perceived now – that is the change that Edinburgh and Richard Cockerill are enacting.

Let’s not forget that Edinburgh came into this game with more regular season wins than Munster, Leinster and the Scarlets. They, along with Glasgow, are the only two sides to finish with 15 regular season wins and that lends credence to the label of “form team” that they had coming into this game. Edinburgh accrued 36 points over the last 10 games of the season and they didn’t put up that run of form by chance. They are an incredibly effective side with a good set piece, an aggressive, organised defence and dangerous weapons in the likes of Bill Mata, Blair Kinghorn and, in particular, their powerhouse winger Duhan Van Der Merwe.

When you pay Edinburgh the respect their form – rather than their relative stature – deserves, you’ll realise that this was always going to be a difficult game.

The first half was a nervy, bitty affair with Munster choosing to kick a lot of their early possession away. The thinking behind this was solid. Munster wanted to get Conway and Earls running at the likes of Van Der Merwe and Fife frozen under the high ball but the execution wasn’t what it could have been.

That lead to a lot of Edinburgh possession and their primary attacking plan was relatively simple but effective for the most part. That isn’t to say that they didn’t box kick in broadly similar numbers to Munster – 18 scrum half kicks each – but I think the quality of Edinburgh’s kicking was slightly better. Our kicking was such that all but one of Edinburgh’s scores came off the back of Munster kick turnovers and there were a few other occasions where loose kicking could have caused more damage but for Edinburgh inaccuracies.

Kicking in itself is not an inherently bad thing, even in this instance. Kicking that turns an average quality attacking position into a good quality attacking opportunity for the opposition is something that can – and has – hurt us.

A lot of Edinburgh’s attacking opportunities in this game came from their use of Duhan Van Der Merwe as a power carrier on the edge of Munster’s defence.

A lot of his effective carries looked like this;

His power and pace caused pockets of useful defensive disruption for Edinburgh in a similar vein to the way that Racing used Vakatawa in Bordeaux in that he demanded constant numbers in the wider channels. You’ll see from the above GIF that Munster had a tough time bringing him to ground on a few occasions – here’s another – and it tallies with the problems we’ve had against teams with big physical threats in the wide areas over the last few months.

On the whole, though, I thought Munster defended quite well, even with the headline number of missed tackles (38) that was mentioned during the game. There are different types of missed tackles and, bar looking ugly on a stat sheet, the only ones that really count are the ones that have no cover around them. Sam Arnold’s “technical miss” in the above GIF isn’t in the same realm as, say, Murray’s miss on Vakatawa in the semi-final because of the relative cover around him. Munster did a good job of moving numbers to the areas that Edinburgh were likely to target with their power carriers and any “miss” helped to slow the carrier enough for someone else to make the tackle.

Despite the ground ceded in the outside edge, Edinburgh were rarely able to build a lot of possession inside Munster’s 22. In fact, the only time they had extended pressure around Munster’s 5m line was mid-way through the first half when Keith Earls shut down a sure-fire try in the corner with a typically excellent defensive intervention.

The only other time Edinburgh would threaten the Munster try line was when they scored in the second half off ground they won in the aftermath of a – you guessed it – a kick turnover. Much of Edinburgh’s possession happened between the 22s and with that, Munster’s defensive performance can’t really be summed up by “38 missed tackles”.

On the other side, I think Munster’s narrow attacking approach in this game was largely dictated by our backfield options and, to a large extent, an element of energy conservation. This isn’t about Sam Arnold – who’s an impressive player who’ll only get better as he develops physically – it’s about a succession of injuries to the guys who have given Munster that dynamic heavy presence in the outside edge and the combinations they allow you to field from an attacking construction perspective. I’m talking about Farrell, Taute and Cloete in particular. Munster had Sam Arnold at #13 against Leicester in the Champions Cup and looked more threatening than we have in the last few weeks – what’s changed? No Cloete as a wide-carrying forward to compliment him and make space through his presence. It isn’t about one player – it’s about missing the player combinations you need to build an attack.

Edinburgh felt quite comfortable in blitzing hard onto our big openside plays because they were relatively confident in their ability to stop us man-for-man in those wide areas.

Darren Sweetnam shipped a bit of criticism for his actions on this play but he had little option but to offload this – Van Der Merwe was about to cart him into touch. I think this acceptance of our current inability to punch holes in the wider channels has informed a lot of our kicking when we’re between the 22s or in our own half. I think this is why we’re generally more willing to use wider options once we enter the 22 with dynamism or when we can generate broken play through contestable kicks or other means in the last month or two.

This game was a further illustration to me that Munster’s main ball-carrying threats are in the middle of the field and, without a dynamic physical threat on the edges, we’re slightly easier to defend on certain multi-phase plays.

That seemed to hold true here and, I think, explains why we kicked a lot from the base. As an attacking strategy it wasn’t perfect, or beautiful but, in the context of where we are right now, it’ll do the job.

From a Munster perspective, we’ve got two weeks to freshen up, rest a few tired bodies, see if there are any late injury returnees and get ready to take on Leinster in the RDS. The beauty of knockout rugby is that 0-3 does the exact same job as 30-25 but with the right ingredients back in action I think we have the ability to extend our season for another game.

For now, it’s up to Munster to wait in the long grass post-Bilbao.

This was a decent display overall.

Simon Zebo kicked a little loosely at times but his moment of sorcery – in his deft kick over the top and then his monster right sided pass to Earls – was a fitting example of his mercurial skills. He’ll be missed for a lot of reasons but his ability to break the game like he did here will be chief amongst them.

Ciaran Parker came into this game in unexpected circumstances. He might have been expecting to come on a little later than the 16th minute but he handled himself incredibly well. He was solid in the scrum for the most part and got through a mountain of defensive work. A good Thomond Park debut.

Peter O’Mahony and Jack O’Donoghue performed well here. O’Mahony’s key interventions came in the lineout, where he trouble Edinburgh’s throw all afternoon and, crucially, when all the chips were on the table. Big players make big plays when it counts.

Jack O’Donoghue continued his excellent recent form and did the job asked of him in defence and at the breakdown with an athletic, gritty performance.

I thought James Cronin had another great game and, a few silly penalties aside was a real threat at the breakdown, in the loose and in the scrum.

I don’t need to ask you who The Man is. I know that you know it is and always will be Keith Earls. He showed it again here with a superb performance in every facet that could be expected of him. When Zebo put the ball in his hands after halftime, there was only one possible outcome with that kind of space and, as expected, the Moyross Express arrived on-time in the corner. That wasn’t enough though; he turned over Edinburgh at the breakdown, harried on kicks, took punishment under the high ball and cut off Edinburgh on a sure-thing finish in the corner. He is quality.

I’ll be covering this game in detail on TRK Premium this week.

In particular, I’ll be focusing on Munster’s defensive work in this game, expanding on my theory on the need for a heavy attacking presence in the wide channels, doing a Reverse-Red Eye on Munster and covering all the technical details you’ll need to know ahead of the Champions Cup final in Bilbao.