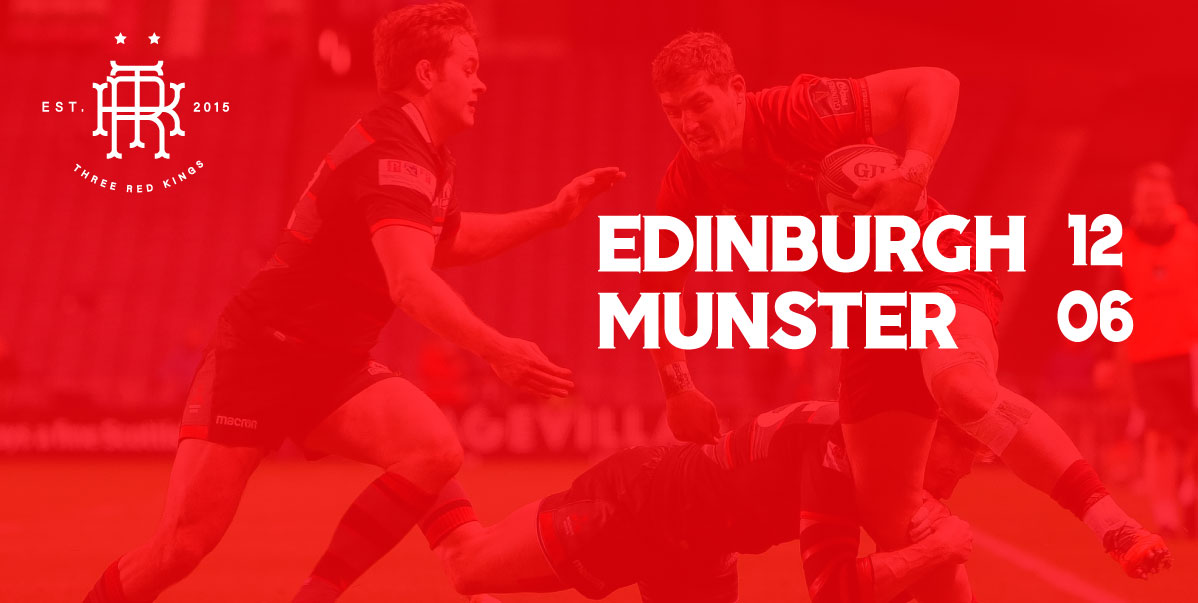 As preludes to Grand Slam Saturday go, this low-key loss to Edinburgh in an echoing Murrayfield ranged somewhere from “dropped birthday cake” to “box of hot mayonnaise” on the Do Not Like scale.

This was a dour loss – somewhat expected, mind – but dour nonetheless. Given the needs of both sides going into this game, it shouldn’t come as too much of a surprise that Edinburgh had enough in the tank to shade this stop-start, bitty affair. Little of what Munster did was very good, or very effective, but that didn’t mean that sneaking a win here was out of the question, if mostly undeserved. That will probably be the frustrating thing for Johann Van Graan and company in the aftermath of this one. It was a winnable game – even with Edinburgh’s relative comparative strength – but it needed more accuracy and quality than Munster brought to the table.

How was this game lost? Quite simply, it was a combination of too many errors, too few moments of quality and too little possession when it counted. Munster had 23% possession and 24% possession in a second half that included an Edinburgh sin-bin period. We didn’t play with the kind of efficiency we needed, or for enough time in the right areas of the pitch and while those things aren’t sexy, they’re vitally important to winning games away from home in the PRO14 these days.

I thought our defence was quite good, for the most part, and that might seem a bit kind when you see Edinburgh’s first try;

That’s ugly viewing, for sure, but it’s not the first time that we’ve been caught rotten after a kick transition like this. Let’s hope it’s the last. You could rant and rave at guys for missing tackles on transition like this but if you were ever going to miss a tackle it would be in this exact scenario.

On both contact points, one Munster tackler helped take out another but the hustle was there to get across. You only have problems in this scenario when the chase isn’t there.

Edinburgh’s second try won’t be a personal highlight for Darren Sweetnam but once this ball went to Van Der Merwe in as much space as he had, it needed picture perfect tackling, positioning (and a bit of luck) to stop the impressive 6’4″ South African wing.

These incidents aside, I thought we defended quite well overall but spent way too long soaking up Edinburgh pressure, especially in the second half.

The biggest issue was with our attacking play, in my opinion. We were a little too deep from the gainline on the occasions when we had decent possession, structured a little too loosely and our passing was a little too slow to take advantage of what gains we managed in contact.

You might slate Hanrahan for not fixing his man before passing this onto Scannell but McKenzie’s line on him was pretty aggressive. Everything thereafter seemed to be happening in front of Edinburgh rather than scorching their outside edge on the surge.

My real issue was with the depth from the gain line. It was present on this play and quite a few others. I’ve been over the relationship between time and space (as it pertains to rugby, not quantum physics) a few times but, essentially, it’s a belief that depth – space – from the gain line gives the defence time to read your attacking intent, pressure your pass and fill defensive gaps.

Obviously, there’s a happy medium at play here because if you’re too close to the gain line you’re in danger of getting smashed early and often but that “Goldilocks depth” from the ruck is the real attacking sweet spot. 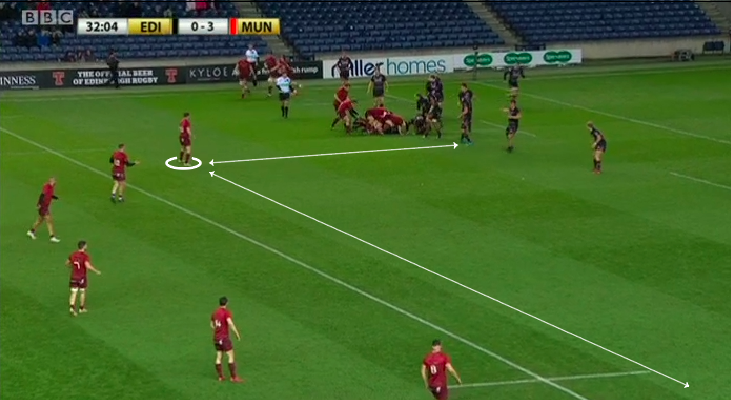 I think this is too deep for a flyhalf to stand off this ruck, given that everyone else in the line will take their positioning cues from him. I accept that there can be value to “drawing a blitz” in this scenario –  where you can pull defenders out of the line to attack the vertical spaces between them – and a possible percentage kick option but generally, I think that this kind of depth from the gain line is counter-productive from an attacking perspective. 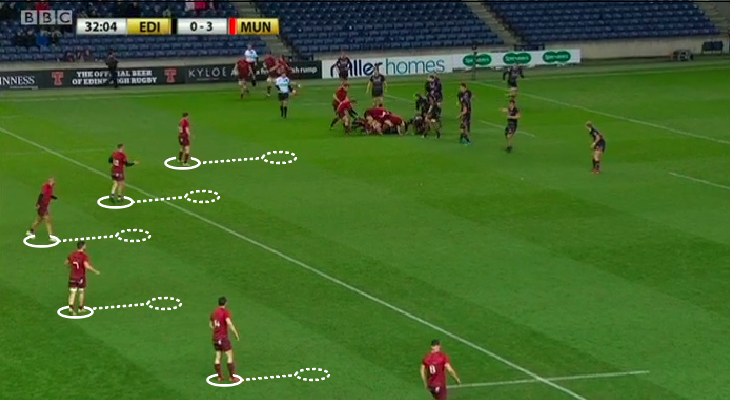 Instead, we cede a lot of attacking space to Edinburgh’s defence who can push out and across as they follow the ball through the line of Munster hands. If you don’t take that space, the defence will. 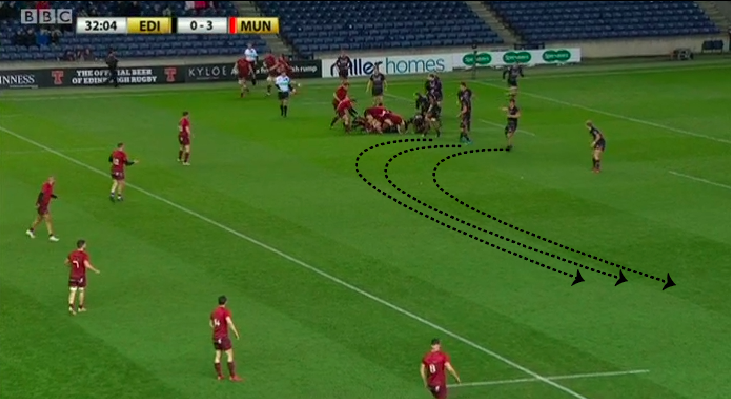 By the time the ball makes its way to Oliver, the chance of a clean line break on this phase had been reduced to long-shot territory. 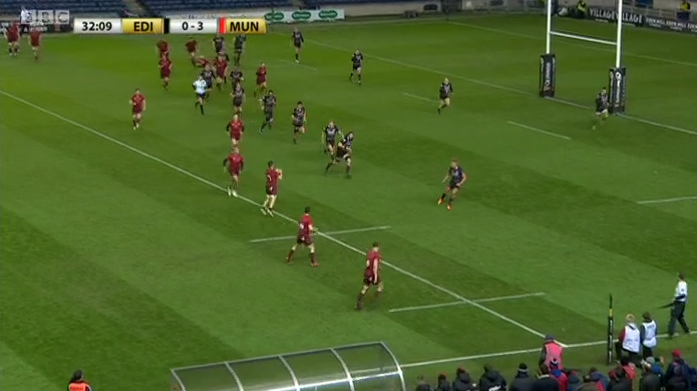 Everything from here on out needed to be perfect. Oliver had to attack Van Der Merwe’s inside shoulder before passing out to Sweetnam and even then, there was a risk of the Edinburgh line swamping the ball and forcing a turnover at worst. He might have had a chance if he could run onto Scannell’s pass but he had to stop and adjust slightly which stepped on the momentum even more. We retained the ball but didn’t really add any value to our possession.

The real linebreak opportunity was a second earlier; 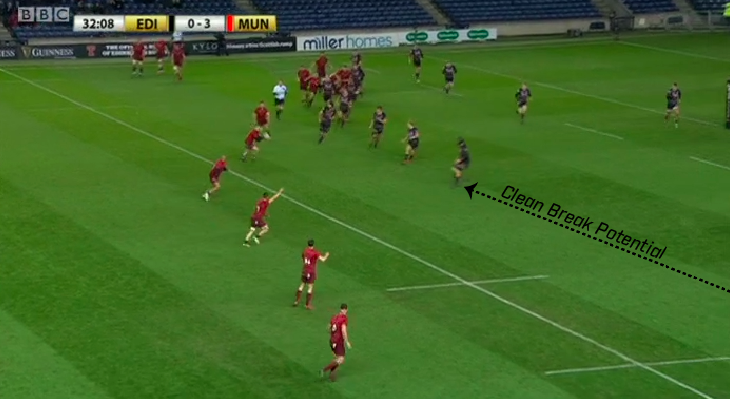 Oliver saw it and was calling for the ball but the distance the ball had to travel added time to Edinburgh’s defensive efforts.

If we were flatter from the point of the first receiver and ran the exact same lines, look at where we’d be;

Little moments like this seemed to add up over the course of the game and sooner or later, a lack of clinical rugby will always catch up with you. The first thing people try to do is blame the coaches in situations like this – I should know, I saw enough of them in my notifications on Friday night – but that kind of stuff overlooks the simpler answer; that a #10 who looks a little low on confidence was standing too deep off a ruck because he wanted to see a little more, take a possible kicking option and wanted a bit of space to work.

We retained the ball on this phase and attacked the far touchline but time and space caught us again;

Everything up to Arnold’s pass was pretty good. For me, Arnold’s miss pass ended up helping Edinburgh’s scramble by adding a second to the ball where we weren’t moving. It’s not that it’s a bad pass – he flings it accurately over quite a distance – it’s just that the pace of the ball bailed out Edinburgh’s flyhalf. I think I know what Arnold was thinking – put the ball to the man in space! But the better option, in my opinion, was to hit O’Donoghue, let him fix the #10 and then either run him over or put Goggin away in the corner. 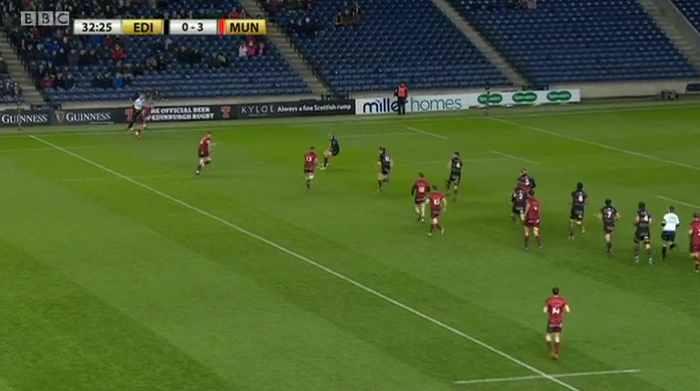 It didn’t happen. Goggin took the ball standing and Edinburgh got men back to bundle him into touch. They scored their opening try a few minutes later. Moments.

That incident doesn’t tell me that we have poor players. It tells me that we have good guys that are bursting to make a big play and, in doing so, can sometimes take bad options. It tells me that guys like JJ Hanrahan look a little low on confidence. When you’re forcing big moments and you’re low on confidence, you can lose important “moments” and whoever wins the majority of those usually gets the win.

We did attack well at times, don’t get me wrong.

This direct attack came from good direct carrying and energy before it broke down on the last pass to Sweetnam.

Overall, I thought that we never really got into a good rhythm of ruck support and lost a couple of breakdowns that we probably shouldn’t have.

Throw in a maul that had good momentum but couldn’t prevent Edinburgh getting hands on the ball. Was that a construction issue or the particular interpretation of Ben Whitehouse’s refereeing team? It was a bit of both, I think. Edinburgh were operating at a 70% maul completion rate out of 10 mauls while we were running at 62% completion off 8 attempted mauls – that’s pretty low for both sides and it certainly seemed like Whitehouse allowed a fair bit of side-swimming and bind switching for both maul defences.

That would affect our gameplan quite a bit, and lead to a few frustrating turnovers when we seemed to have a bit of momentum behind us. Those turnovers were a few other moments that crept away from us and added up to a relatively narrow 6 point loss.

In the micro-battle of moments, two stand out to me having watched back –

(2) We missed a penalty to touch that would have lifted nearly 20 minutes of defensive pressure with a lineout deep in their 22.

We just didn’t play well here. This has been a common enough theme away from home this season and lends itself to the lack of experience and first string quality that we had in similar games last season. Games like these are where injuries to guys like Andrew Conway, Niall Scannell, Jaco Taute, Chris Cloete and Tyler Bleyendaal really hurt.

This loss won’t define Munster’s season but there are elements that will need to be tweaked before the Scarlets, let alone Toulon. We looked bitty and disrupted in this game, which had a lot to do with the disjointed nature of the last few weeks. As you’d expect, our defence (work rate based) was generally better than our attack (cohesion based) as a result.

These two upcoming games against Scarlets and Toulon are almost a different reality to the context of this one just gone, but there are lessons to take from this loss, as dour as it was.

The Wally Ratings: Edinburgh (a)

As per usual, players are rated based on their time on the pitch, if they were playing notably out of position, and on the overall curve of the team performance. I didn’t rate Alex Wootton due to leaving the first half early due to injury, Brian Scott due to not having very much time on the pitch as a prop or Jack Stafford, who didn’t feature off the bench.

Not a great outing for anyone of these guys really. There was plenty of effort and a few good individual moments but it just didn’t come together for any of them for an extended period of time. Defensively, I can’t really fault any of these lads outside the two incidents I highlighted above but the jagged, disjointed nature of the performance dragged all to levels quite a bit below their best.

I thought these lads brought decent energy off the bench. Darren O’Shea and Kevin O’Byrne had a good impact carrying the ball and linked up well in the lineout. They weren’t outstanding by any means but they showed up well on my second watch back.

Bill Johnston had a decent second half with what little ball he had to work with, in my opinion. The only problem was that he didn’t get a hold of the ball until the 68th minute having been on since halftime.

That illustrates a lot of our problems here, actually. He had two good involvements in what was probably our best attacking sequence of the game.

Other than that he was busy in defence, got involved in defensive and offensive rucks when needs be, and carried himself with the kind of poise you’d look for in a guy that came from the same u20 class as Jordan Larmour, James Ryan and Andrew Porter.

I’d love to see what this kid could do with a bit of ball and go-forward.

Not great, not poor, but decent enough.

Now forget this game ever happened.

I’ll be covering Ireland’s Grand Slam, looking at Munster’s depth chart and previewing the Scarlets game in detail on TRK Premium this week, which you can subscribe to for just €2 a month.