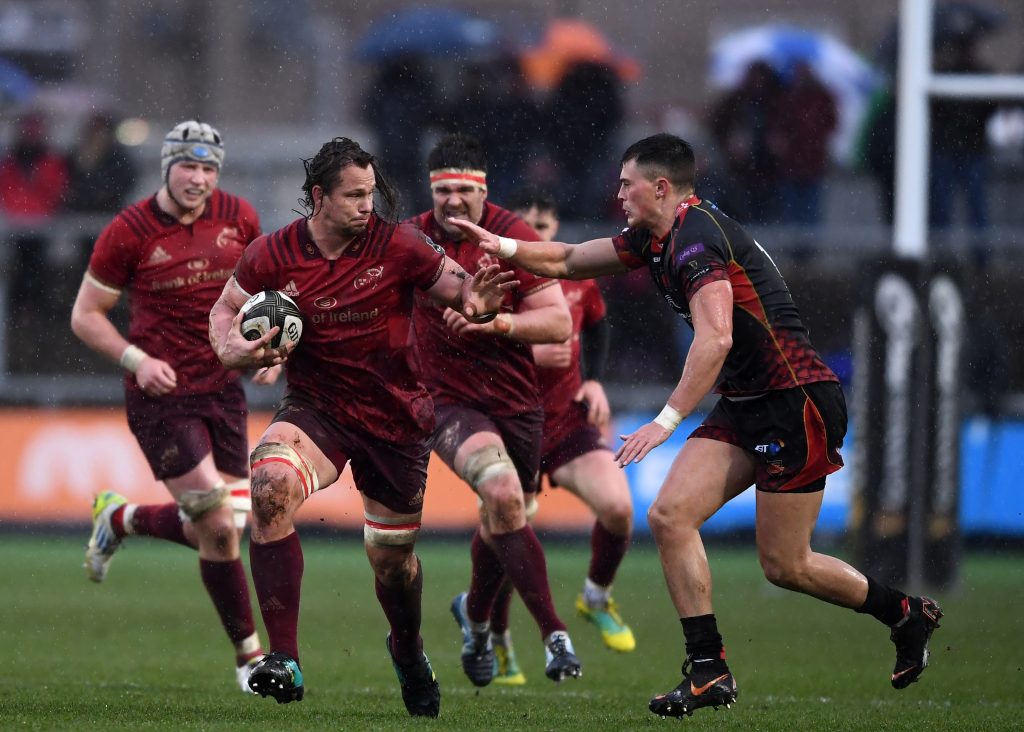 To give you a flavour of how this game turned out if you didn’t see it, let me throw a stat at you.

You can rub it off your teeth like a hard-bitten narcotics cop in a gritty 80s movie might do to test the merchandise before growling “it’s pure”. In this game at Rodney Parade, Munster kicked the ball 62 times and the Dragons kicked the ball 56 times. Let the buzz of that wash over you until you feel like growling “it’s pure” into the camera like the hard-bitten narcotics cop that you are.

Listen, this wasn’t a game for anyone looking for a few sizzle reel highlights come the end of the season – even the end of the day – but the result garnered will be significant nonetheless. Munster’s 8-7 win in manky weather conditions manned by a team of guys down the depth chart and fresh out of the academy pushed them back to the top of Conference A and kept the momentum going. That the momentum was kept going in a scrappy, messy game that was uglier than the floor of a student bar during Rag Week is neither here nor there. The four points garnered will spend the same come the end of the season if they had been earned in a back and forth thriller, and that’s all that matters at the end of a long stretch of ten consecutive games going back to an away fixture against Zebre on the 25th of November 2018.

The howling wind and lashing rain that battered Newport before the game dictated how it would be played in large stretches. There would be no Running Rugby or Tries From The End Of The Earth here. Oh no. This was a day for playing as little of the ball in your own half as humanly possible and forcing the mistake spheroid down the field to try and pull a booboo out of the opposition. Munster gave up slightly less of those errors than the Dragons did and got the rewards in the end. To beat the Dragons on a dry day, Munster would want to hang onto the ball and stress their defensive structures to the breaking point in a similar way to Clermont. The weather conditions meant that playing around with the ball in a wider ruck structure just wouldn’t work so pragmatism – ugly, brutal pragmatism – was the order of the day. The rain you could deal with but the slick underfoot conditions and the ever-changing, gusting wind made playing with any kind of pace or width all but impossible.

Look at the wind taking hold of this late Dragons’ penalty for an example;

It’s like an invisible hawk flew away with the damn thing. My point is, it was a horrible day for rugby so it would, for the most part, produce horrible rugby as a prerequisite. There isn’t that much to discuss about it, to be brutally honest. The ball would need to be kicked and errors would need to be generated and that’s what happened.

The performance of the referee kept Dragons in the game for long stretches. He was reluctant to punish repeated Dragons infringements close to their try line and his refereeing of the maul was curious, to say the least. Munster’s handling and kicking errors had more of an effect on the game though, so I’m reluctant to dump on the rookie ref all that much. The conditions were as hard for him as they were the players.

These are the Super Deluxe Wally Ratings after all so here are the highlights from a Munster perspective.

You’ve a nice sequence of offloads between the forwards, Bill Johnston’s penalty, Stephen Archer’s try that wasn’t, a lovely quick tap and excellent power carry by Haley and Jean Kleyn’s close-range scorcher to take the lead. There’s not much else to discuss.

Munster defended quite well and, for the most part, made sure the game was played in the right areas while keeping the number of critical errors to a minimum. Dragons didn’t often play in a part of the pitch that troubled Munster’s defence and, in the conditions, that was crucial. The lineout was pretty solid throughout given the conditions and I thought we did a decent job of contesting their ball when the pressure was on.

The important thing here was getting the win by any means necessary once the “quality leveller” of the weather came into play, finishing the block off properly and going into the two-week break top of the conference. That’s the only thing that will be of real import in the aftermath of this contest as long as no one picked up a knock that will last longer than two weeks to recover from. Sometimes a win is a win can be hollow enough but there are some games where it’s massively appropriate. This was one of them.

Munster walked off the field without many highlights for the end of season DVD but with something much more valuable. Momentum.

The Wally Ratings: Dragons (A)

The forwards carried well for the most part and ran a good setpiece but, for the most part, it wasn’t a day for too much glamour. They all performed quite well. Not a day for Five Star Men but I thought that Mike Haley, Darren Sweetnam and Alby Mathewson were the pick of the bunch.

Haley and Sweetnam patrolled the backfield really well and kicked/chased very smartly. Haley’s carry in the build-up to Kleyn’s try was vital and showed real quality.

Alby Mathewson did a fantastic job of refereeing this game when he managed to get in Sir’s ear and he moved Munster around the field quite well in a game that would punish errors in position and structure quite harshly. He’s a great guy to have around for games just like this one and he was incredibly valuable here.