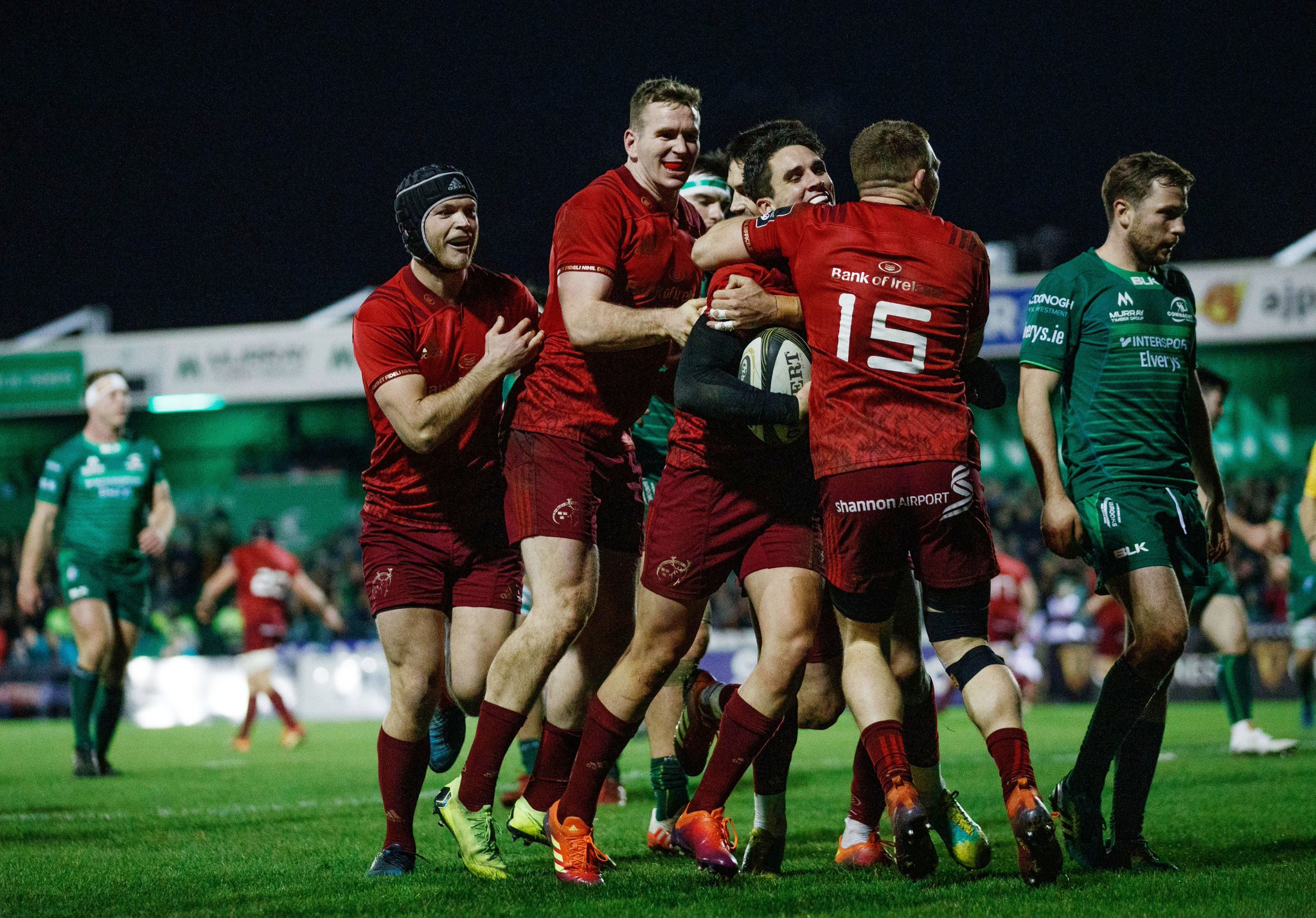 A bonus point win in the Sportsground and just like that, Munster are top of Conference A by two points.

Just a few short weeks ago, the idea that Glasgow could be hauled in at all – they were ahead by 10+ points back in November – but Christmas has changed everything. Glasgow lost twice to Edinburgh and fell to a resurgent Treviso in Italy. Munster, on the other hand, picked up 10 points – one in Ravenhill, four in Thomond Park and all five in a rollercoaster game in the Sportsground on Saturday night. All of sudden, it’s been a great Christmas period for the Southern Legion.

The final score – Connacht 24 Munster 31 – was a fair reflection of the game itself. This was two sides with intentions to really play going at each other and it produced an excellent, high-quality game to watch. This Connacht side are a serious bunch under Andy Friend, even without Aki, Buckley and Butler. They know how to play to their strengths and they don’t waste time playing a game that doesn’t suit them. They may have lost this game but they were far from poor – and this win at the Sportsground is up there with Munster’s best of the season so far for just that reason. This was a game that the Munster coaching group targeted in advance and, ultimately, came out with exactly what they would have wanted under quite a bit of result pressure.

Glasgow’s loss pregame made the stakes clear for both sides. Munster would go top with a win, Connacht would go second forcing Munster to third.

To do that, Munster would need to win on the road against an Irish province – something we last achieved in the Sportsground back in December 2016. Our much maligned away form over the last few months has, as you might have expected, been a little overstated, especially in the PRO14. Every game we’ve lost on the road we also lost last year but even from a points gained perspective, we rank fifth in the PRO14 (behind Leinster, Glasgow and Connacht/Treviso in that order) but, crucially, with trips to the Arms Park, Scotstoun, the Aviva and Ravenhill out of the way prior to this game. But winning in a soldout Sportsground was what was required. No easy ask.

Our phase play had a bit more power and pop to it in the opening nine minutes. Munster looked threatening, and with a range we’d not seen very often this season. But when Carbery fed Botha in the wide channel in the ninth minute, he was stripped by the excellent Tom Farrell who raced away under the sticks for Connacht’s opening try. It felt like a bit of a mugging, and it was. Munster had been the better side in the first 10 minutes and Farrell’s intercept try – in so many words – was a punch to the solar plexus that turned a good start into something that would need a response.

That response would come within five minutes off the back of some excellent Munster phase play, tactical kicking, lineout work, mauling and heavy ball carrying. Those fundamentals were the core that this win was built on.

First of all, this was an excellent bit of work from Niall Scannell. His initial carry was good but pick up and drive for an extra 5m gave Munster some extra time to align their attack and allow Mathewson to read the options. 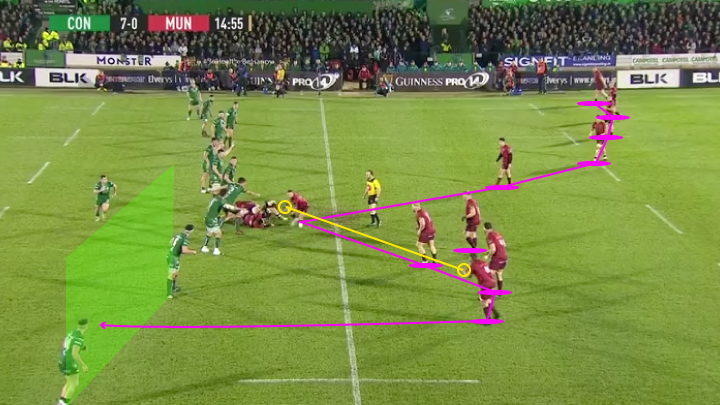 Mathewson can go right, to Carbery and most of the aligned backs. Or he can go left, to a pod of heavy ball carriers. Both options work because they both have a viable threat. Goggin and Farrell are stacked on the openside with Botha and Kleyn as shorter range options.

Botha releases Wootton, who stabs the ball through beautifully for Mathewson to harry Blade into touch. Excellent field position generated by excellent structure.

From there, Munster ran a solid lineout, mauled well, went through the phases and, when the time was right, they struck wide. Farrell and Goggin punched up the middle and pinched four Connacht men on the wrong side of the ruck.

From there, Mathewson fed Carbery who picked out Earls in the second layer. Earls found space and then an offload to O’Mahony for the equaliser.

Munster’s second try came off a similar sequence of forward dominance. A maul forced a penalty. Another maul forced Connacht into an elongated defensive position close to their own 5m line.

Munster attacked across the pitch and eventually came up short of the line but with a 5m scrum to attack off. Mathewson broke across the line, isolated Daly and then fed Goggin, who blasted past the on-loan Leinster man for Munster’s second.

A Connacht penalty on the stroke of halftime brought Connacht within four but they’d retake the lead just a few seconds after halftime with a nicely taken try that attacked Munster’s defensive edge in midfield.

It was time for a further response. But Munster didn’t panic or resort to off-structure wildcard rugby. They went back to their basics.

A powerful maul drove Munster up the field.

Munster’s maul had been so effective to that point that Connacht rarely counter-jumped. Even when they waited on the floor, Munster were still driving through for big gains. Munster offloaded cleverly through Earls to O’Donnell and, off the resulting ruck, we went to our screenplays.

This is just effective rugby. Beirne’s pass to Carbery is outstanding, and the work from there is just as impressive. That put Conway into disrupted space and forced Connacht to realign to a wide defensive position.

From there, Munster worked a centre-field position and brought out a set play.

This looks like open offloading, but I don’t think it is. This is Munster working a set play. The previous ruck point (left) is the target of the attack against the grain from Earls, but Carbery has to sell the attack is on the right side. 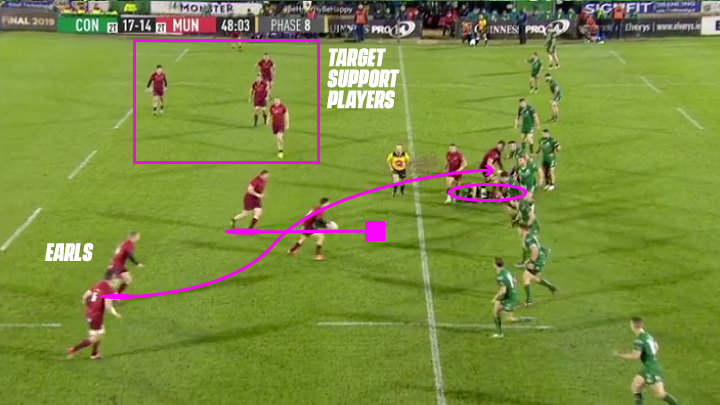 Archer will run a blocking route – watch him turn and shunt in the below GIF – for the inside B/C defenders so that Earls can attack the point of the ruck to find support runners flying into disrupted space.

That created the hole for Farrell to put Wootton away and, off that linebreak, find Beirne surging onto the ball. Mathewson hit him perfectly.

From that field position, Mathewson floated the ball across to Goggin for the easy finish but this was the product of excellent attacking thought – but in-game and pre-game.

Joey Carbery would score the bonus point try in the last quarter. It came from – again – strong maul work to the centre of the field and excellent tactical kicking and chasing. Munster worked Connacht into the middle of the field and put Carbery in position to kick down the line.

Earls chased, put Healy into touch and from that lineout position, Munster would maul, win a penalty and score a try across the field on advantage.

Connacht scored another try to bring them back into the range of a draw a few minutes later but Munster would see out the win through the controlled kicking of Murray off the bench, some good defensive work and a crucial rip from the ever impressive Beirne.

A Bleyendaal error would make the endgame stickier than it needed to be but Munster saw it out for the win that would see them move to the top of Conference A.

It was Munster’s best away performance of the season so far and against an impressive Connacht side that played anything but poorly. The excellent Carty and Tom Farrell moved the Westerners around the pitch excellently and they ran superb support lines all game long. They were dangerous, inventive and solid in the scrum. Munster’s outstanding attacking and defensive breakdown was the key to this win, as was the excellent lineout maul. The heavy ball carrying presence of Goggin and Farrell elongated Munster’s attacking radius and gave us the kind of range that we’ve been looking for all season long.

There were a few defensive slips, sure, but the physicality shown by Munster all over the pitch here should stand to them in Kingsholm this coming weekend. Being top of Conference A is a proper reward for a good two months in the PRO14 for Munster Rugby. Can we sustain it? We’ll see – but if this Saturday just gone is any evidence, we might yet surprise a few people this season.

The Wally Ratings: Connacht (A)

Niall Scannell, Tommy O’Donnell and Jean Kleyn all had excellent, abrasive performances in different facets of their game. Niall Scannell, in particular, carried the ball superbly up the middle of the pitch and was flawless in the lineout while sticking 15 tackles. Impressive stuff.

Joey Carbery had a super game from the tee and moved Munster around the field excellently. His try showed how good he is with space to work with but his movement, kicking and mobility around the ruck was the most impressive thing for me. Just missed out on a five-star performance by a move to fullback late in the game.

Tadhg Beirne had another remarkable game in a season that has already racked up a few. His lineout calling was immaculate, and his ball carrying, passing, rucking and mauling was superb throughout. He’s playing like a guy who demands Irish selection in the Six Nations. His basics are superb. His extras are superb. Beirne’s a Rolls Royce second row and showed his class here repeatedly. ★★★★★

Keith Earls played like a guy who knows he’s The Man. And why wouldn’t he? He is The Man. His chasing, attacking positioning, offloading, defensive tracking and work in the second layer was a different class. Hitting peak form at the right time, just like you’d expect ★★★★★

And finally, The War God of Temple Hill. Peter O’Mahony.

He stole lineout ball, he stole breakdown ball, he probably stole a rake of Connacht jerseys on the way out as a tribute. When O’Mahony plays like this, he can dominate the game in the big and little moments. He was there for Earls offload to score Munster’s first. He was there to take a Connacht lineout like it was thrown to him deliberately.

He was there to win a huge penalty at the breakdown not once, but twice.

O’Mahony helped to shape the game from start to finish and showed just how good he actually is without even scratching the surface of what he’s capable of. We’re watching a great of the game in action. ★★★★★