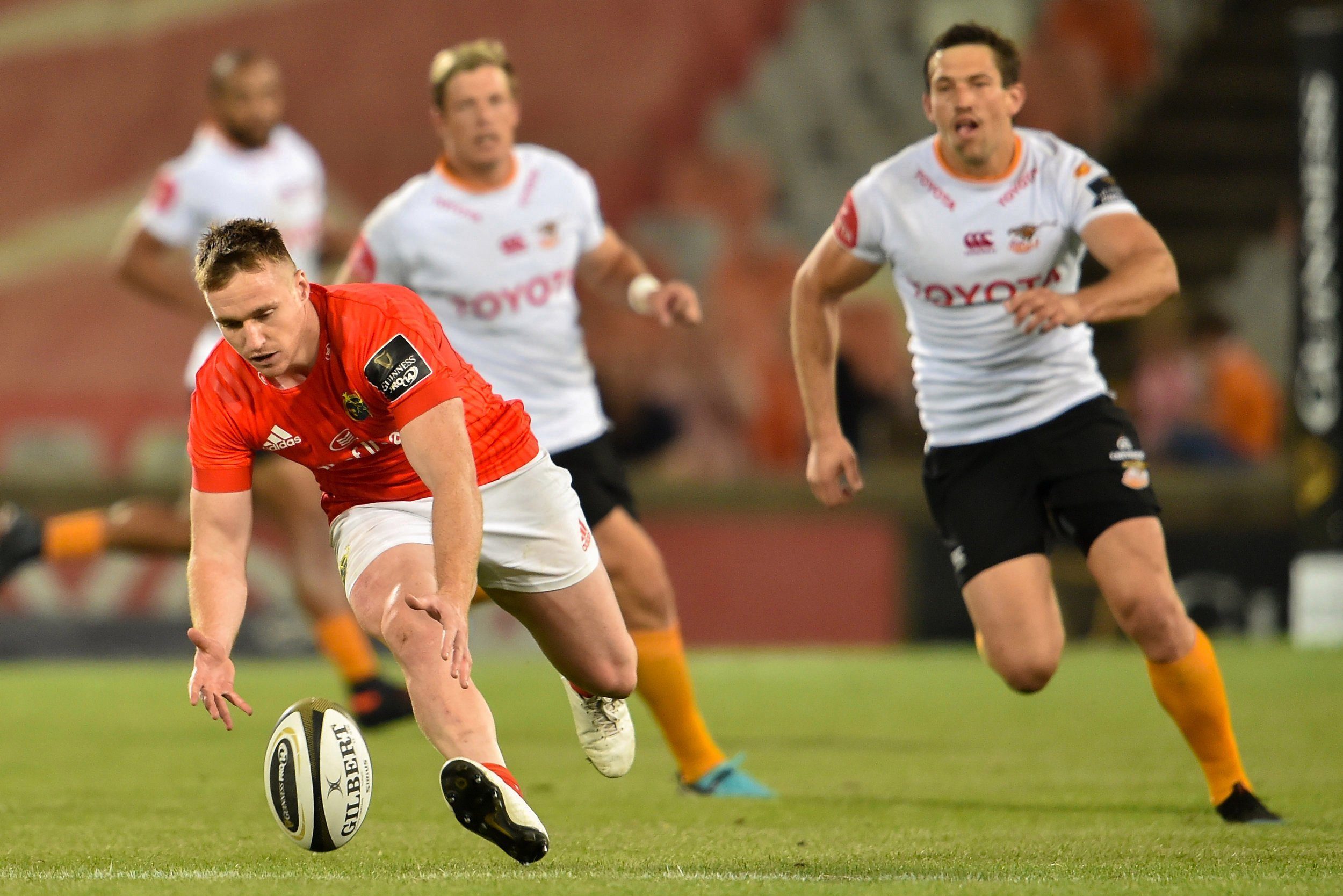 After a performance like this and, more importantly, a scoreboard like this, you need to keep perspective.

In the same way that wins over the Dragons and Southern Kings weren’t worth getting carried away for, this loss to the Cheetahs in Bloemfontein isn’t worth losing the head over either. Ugly scoreboard aside, the best thing you can do is place this game squarely into the “bad day at the office” pile of games that were doable, right up until they weren’t.

There aren’t many tougher places to go than the Toyota Stadium in Bloemfontein at this point in the season. You’re playing at altitude, against a very cohesive, talented group that have been mostly playing together since the Currie Cup and, in this particular game, in their last game under their Italian bound head coach, Franco Smith.

Munster had a way to win this game and, for the first 40 minutes, I thought we went about that task pretty well. To understand the job, you have to look at the ways you disrupt the Cheetahs. We know that they like to play a lot of stuff off #10 in Q2/Q3 so you know you’ll be doing a lot of running across the pitch so you have to trust your inside defender to manage the track, and then look to disrupt them as they set for their next wide ruck.

In this instance, McCarthy didn’t stay out on Pokomela and hung on Small-Smith’s line.

For me, he had to trust the inside man – O’Donoghue – to make the tackle on the angle. But these are the questions that the Cheetahs pose on their big openside plays, like this one.

To illustrate the challenge, look at the possession numbers of their midfield 10-12-13 for an example.

That tells me that the Cheetahs used a lot of width and managing that width – and tempo – is the best way to reign them in, especially if you can force them into a lot of centre-field rucks in Q2/Q3.

We did a decent job of this, in the first half, and pressurised the Cheetahs passing lanes quite well. This is where the Cheetahs don’t want to play. 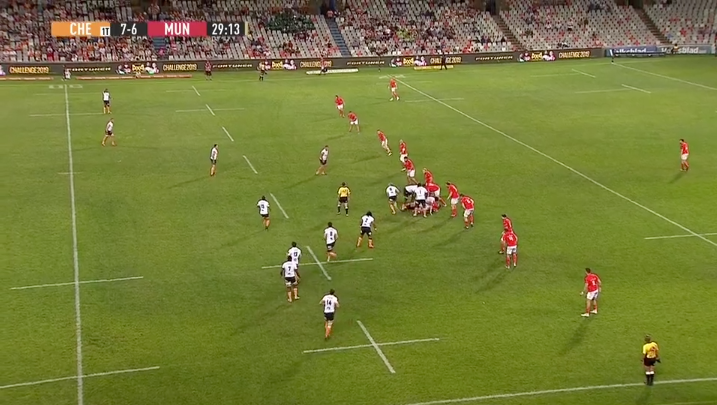 No structure to play wide off, show ball and everything is happening in front of the defence rather than on an angle to the defence.

The key point in this sequence is our ruck spacing. We don’t lose excessive guys to the defensive ruck and we’re all set on the fringes to guard Pienaar while also giving licence to the outside players to fan out and pressure the pass.

Sometimes they’ll get away with hilarious blocking lines off those central positions but you have to roll with decisions like that when you’re getting reffed by that lovable rascal, Mike Adamson.

Even in the aftermath of this linebreak, the theory worked.

When we lost our spacing at the ruck – it made it harder to defend the Cheetahs centrally. We had decent numbers but Wycherley was drawn by Pienaars pump-fake (won’t be first or the last to get that one) and that left space for Nche to finish.

That’s a mistake that doesn’t cost you much on the halfway line but is really expensive 5m out.

Here’s another example. It’s off a centre-field ruck position, we have good numbers, so what goes wrong?

We let the Cheetahs get outside of us off a static central position. Here’s where I think we went wrong. Look at the initial ruck positioning. 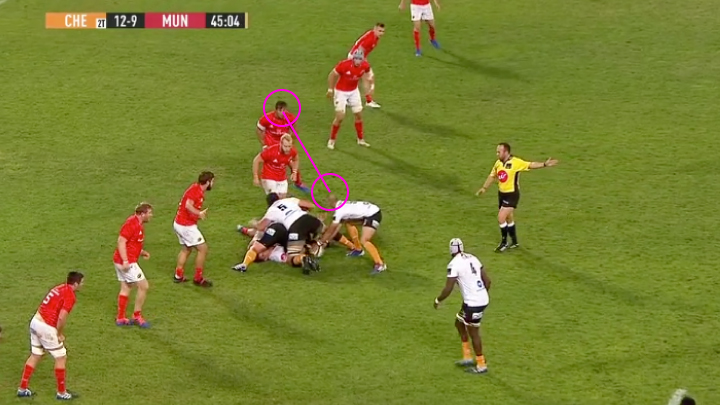 Botha has narrowed in on Pienaar and that constricts our ability to bounce out into the Cheetah’s structures. Loughman is OK here for me. He’s tight to the ruck covering the break from Pienaar. Typically, the “B” defender – Botha in this instance – would look for threats like a scrumhalf breaking, but for me, he’s leaving too much of a gap between himself and the wider defenders. 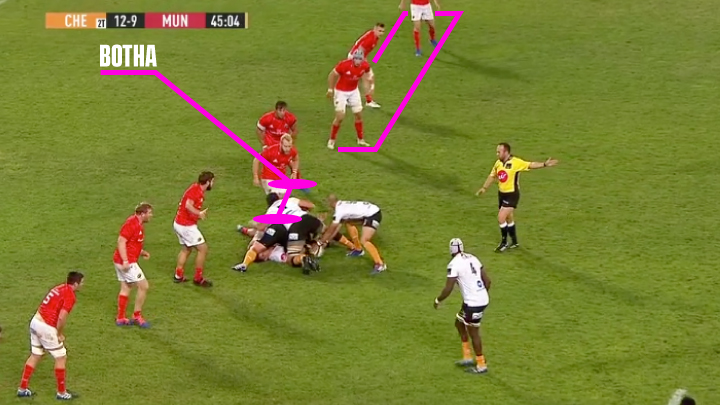 When the ball comes to Nche for the pass back to Schoeman, I think we’re one man “inside” the speed of the ball. Essentially, I’d want Scannell closer to Dweba – the second man in the pod – rather than coming onto Nche.

The pass from Pienaar essentially takes out Botha, Wycherly and Scannell from the equation here.

Yes, Nche’s pass is well done but I think Botha taking up a more expansive defensive position would have allowed a more aggressive “out” push from our wider defenders. Right on the edge, you see the other mistake – Haley standing up on Fouche’s line and not backing O’Donnell to cover the space.

Two small errors lead to a third try for the Cheetahs. Even then, we were still in with a shout.

A lot was made of our attacking work – or lack thereof – for much of this game in light of our box kicking strategy. I don’t have an issue with our approach. We would need to kick against the Cheetahs and when we were finding multiple handling errors under the high ball, we’d have been dumb not to keep punching the bruise.

The issue came from our inability to convert the resulting scrum positions that we earned, both under the high ball and on defensive pressure.

Here are a few examples;

We didn’t concede a penalty at this scrum – that came from Jack O’Donoghue being adjudged to have gone off his feet at the ruck directly after it – but we lost a good attacking position on the back of real pressure coming up on the tighthead side of our scrum.

For me, there’s a real “bore” coming in from Nche on Archer. The tell-tale sign for me is this still image. 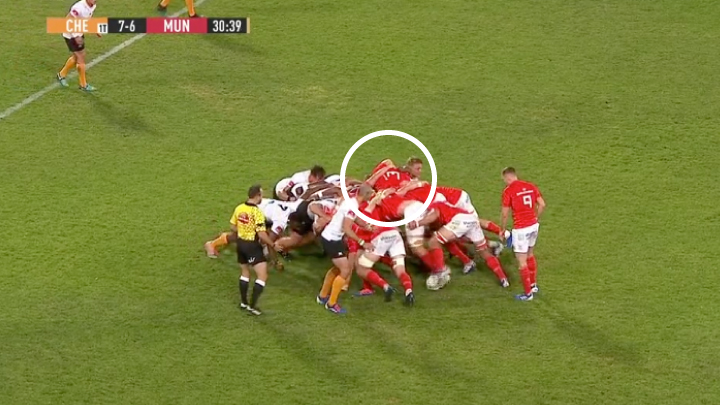 Generally, that’s a sign of some “interesting” angles going on from the opposition loosehead. It was a position lost and, to compound the misery, Schoeman banged the resulting penalty into our 22 from the Cheetah’s 10m line – another downside to altitude – and the Cheetahs would have their second try a few phases later.

In the second half – at 19-9 – we had some really good scrum opportunities that we just couldn’t convert.

Here’s one right inside the Cheetahs’ 22 in the aftermath of (another) Cheetahs’ error under the high ball.

The pressure comes up on the loosehead side again and, again, I’d be wondering about the legality of Nche’s scrummaging angles. 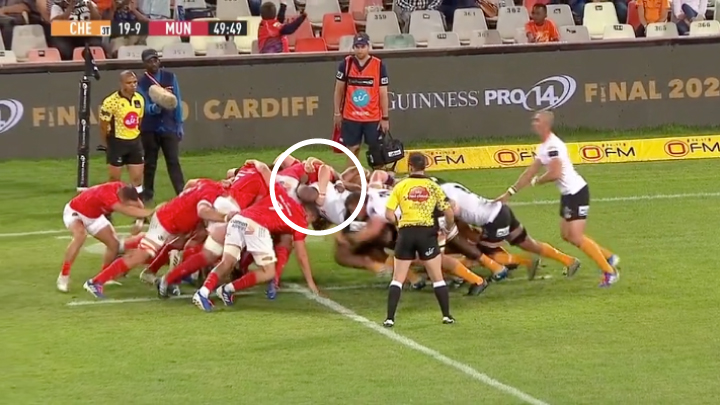 But we could equally wonder about how much counter-pressure we’re exerting through our hooker. Either way, it was a great attacking position lost and we actually turned over the ball as our scrum collapsed backwards.

A few minutes later, right after the Cheetahs bonus point try, we had another excellent position to at least put us in range of a losing bonus point.

Knox and O’Byrne had stabilised up the tighthead side in the intervening scrummages. You can see the Cheetahs looking to step out and drive in again here but getting locked out by Knox.

That gave us a platform and we earned another penalty under the posts. You might say, given the pressure we’d been under the scrum all game, that we should have gone down the line at this point but, from Billy Holland’s perspective, he’d just seen Knox lockout Nche so why not go for the best attacking platform you can get from a set-piece – the attacking 5m scrum under the posts. We conceded a penalty and with it, our grasp in the game, I felt.

For me, the tighthead’s armpit bind and belly flop look like the problem here but Cronin’s elbow pointing down is usually what refs tend to blow for, unfortunately.

The Cheetahs enjoyed the referee’s favour at the scrum for most of this game, both with penalties and on what was and wasn’t penalised. Their fifth try came off the back of a penalty position earned, again, through some real angling in at the scrum.

But again, this is our own fault for not establishing dominance early in the game. The way most referees – in the PRO14 anyway – adjudicate the scrum is in whoever “looks” dominant. If you’re going forward, by hook or by crook, most referees will determine that you have the better scrum. We didn’t put that picture in the referee’s mind early and suffered throughout as a result.

It prevented us from sticking with the Cheetahs until the last quarter. At 19-9, we were still in it but after that lost opportunity under the Cheetahs post, the air seemed to fall out of our tires. Two late tries added a gloss to the scoreboard in a disappointing day’s work.

We had a few nice moments in attack.

But without a dominant scrum platform, we weren’t able to exert the kind of pressure we needed to really hurt the Cheetahs as the game developed.

As I said, we were in it right up until we weren’t.

Onto Cork and the Ospreys.

The Wally Ratings: Cheetahs (A)

There weren’t very many standout players from a Munster perspective here.

I liked the look of Keynon Knox off the bench, while Jeremy Loughman impressed me with some of his ball carrying.

I felt Nick McCarthy, Tyler Bleyendaal, Rory Scannell and Dan Goggin didn’t have a great day with the ball in hand. McCarthy’s kicking was pretty good for the most part but I felt some of his ruck decisions and passing wasn’t what it needed to be. I also felt that Bleyendaal and Scannell didn’t really get us into the game when we earned good attacking positions through our phase play and Goggin suffered as a result.

My standout player was, once again, Shane Daly. He hit the line with pace, constantly looked dangerous in possession and made more good decisions than bad in defence against a side that’s a tough side for a winger to defend.