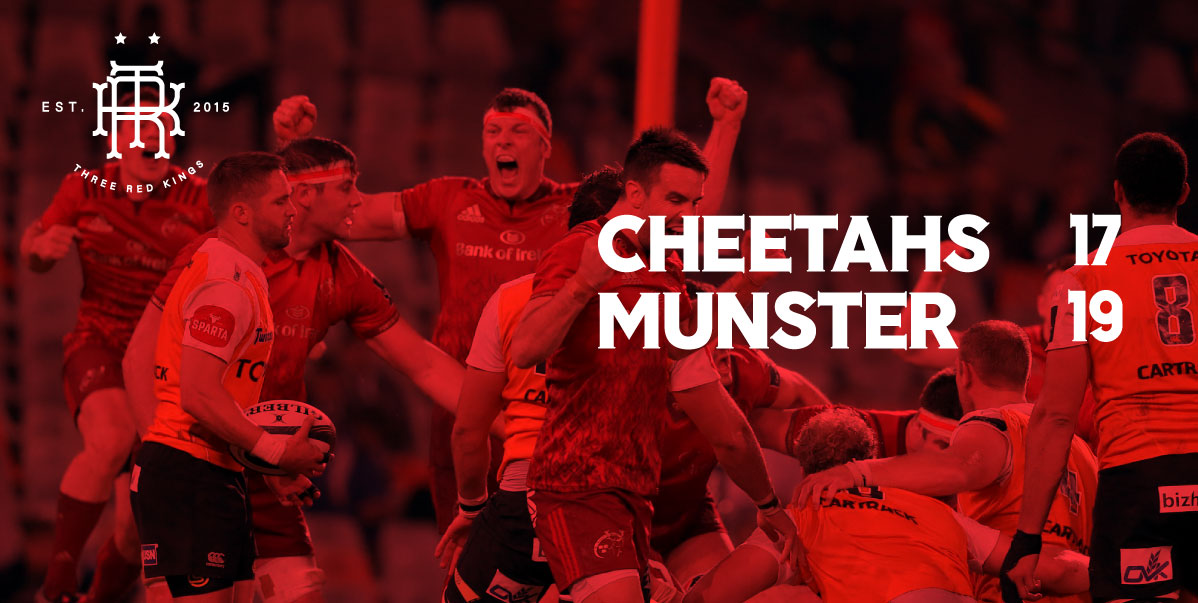 Sometimes you can’t help but be thrown by Munster Rugby.

I had just such a moment during a break in play here when The Fields began to roll and echo through the Free State Stadium in Bloemfontein before the stadium tannoy piped up to drown it out. Att Horak Street is 14,000 kilometres from the Cratloe Road give or take a few hundred clicks. It doesn’t matter if it’s across hemispheres and the Sahara – the Sixteens were still makings themselves heard on the Highveld of South Africa.

We might have been outnumbered in the stadium but when it came to making noise, Munster brought more soldiers than they did.

That was the story in the stands, but what about the pitch?

Long story short, this was classic Bad Guy stuff against a talented, dynamic Cheetahs side that tore into an early – and deserved – 14 point league in the first half. Munster rode out the Cheetahs initial energy and then slowly, relentlessly, inevitably, dragged them back. A 14 point lead became a seven-point one, briefly stretched back out to ten, but then slowly began to slip away from the Cheetahs as Munster upped the pressure in the second half and chipped away at their lead off the tee. When Conor Murray stood over a long-range penalty in the 65th minute, there was an air of inevitability about the outcome and, just like that, Munster were ahead and would stay there. Written like that, it seems easy. It was anything but.

I wrote pre-game about the Cheetahs ability to play high tempo rugby out of the contact area and how Munster would have to stop this aspect of their game if they were to prevent the Cheetahs from generating the kind of dynamic momentum that has won game after game for them in this stadium. Munster didn’t really get a handle on this facet of the Cheetahs style until late in the first half and, for a while at least, the Cheetahs looked capable of breaking the gain line with unsettling regularity through the narrow, dynamic offloading of Cassiem, Nche and Goosen.

Munster just couldn’t get the ball to the floor and the Cheetahs are excellent at working in this disrupted space between the tackle and open play.

The Cheetahs tactics in the opening 30 minutes were proving extremely effective at building good attacking sequences. They kicked long, pressured Munster’s exit and then managed to retain possession at the resulting lineout and attack with tempo.

Munster were able to pressure the throw to the front but the Cheetahs were able to adapt for the most part and get good ball to the tail that really helped them get on the front foot in the opening 30 minutes. In a way, it played into Munster’s initial difficulties at altitude. We were forced into a lot of early defensive cardio across the field as a result of the Cheetahs attacks off the lineout.

Our exits weren’t great for much of the opening 40 minutes and the Cheetahs capitalised on the field position we gave them and scored two tries that encompass a lot of what they do well as a team, even if a few of the decisions in the build-up would have irritated Munster.

First, Simon Zebo was shown a fairly soft yellow card for this;

Then Mike Adamson provided an excellent blocking line for Cheetahs second, before striking off a Munster try for a supposed knock on in the scrum five phases before O’Donoghue barged over from close range. It began to look like it could be one of those games.

But then Conor Murray came on the field and did what Conor Murray does – change the terrain of rugby matches.

First of all, he scored a try with his second touch of the ball…

… and it was a classic Conor Murray Special. There are few scrumhalves in the game that can match Murray’s ability to finish from five metres out and he showed that again here with a vital try in the grand scheme of Munster’s season.

It would be reductive to shower all the praise for Munster’s win on the shoulders of Conor Murray given the timing of Munster’s upturn in this game but it can’t be overstated his effect on Munster’s overall strategy.

Our exits were generally better, which moved the Cheetahs further out the field and, as a result, allowed our forwards and midfield to pressure their possession. O’Mahony, too, was beginning to affect the Cheetahs throw. Their work in the first half was based on getting solid ball in the middle and the tail but their ambitions narrowed as the clock ticked on.

Munster’s maul defence came to the fore too, as the Cheetahs throwing range shortened. Grobler, O’Mahony, Holland and Archer were able to do a similar job to what happened in the Toulon game and that played into an overall dip in the Cheetahs’ forward effectiveness as the game wore on.

Munster were better at hanging onto the ball on our possession too, and as we accumulated phases Cheetahs discipline began to fade. From the resulting penalties, Munster were able to bring their maul into play, build more pressure and chip away at the Cheetahs lead through the boot of JJ Hanrahan and, crucially, Conor Murray.

When we took the lead, the result never really looked in doubt. The Cheetahs had a few lineout mauls but Munster defended those with the kind of intelligence and physicality that were the hallmarks of this second half performance.

A scrum set in the dying seconds would have raised the blood pressure of the Munster coaching staff, but that ended with a Munster penalty earned by the scrummaging of Dave Kilcoyne and with it, the win.

For Munster to come back from a 14 point deficit in as difficult a place to play as the Free State Stadium, with as much needle as there was in this game, is a further illustration of the squad’s development in confidence and execution over the past few weeks. The Cheetahs are a good side with dangerous players and they’ll be a handful for anyone in the PRO14 playoffs so to beat them as Munster did is noteworthy.

This victory makes it four wins on the spin for Munster (Scarlets, Toulon, Kings, Cheetahs) and that series has seen Munster qualify for a European Champions Cup semi-final and copper-fasten a home PRO14 quarter-final with a game to spare.

Confidence, grit and competence; this win had it in spades.

The Wally Ratings: Cheetahs (a)

I thought Oliver and O’Callaghan played quite well when they came off the bench and were more than up to the specific physical challenge posed by the Cheetahs pack.

Ian Keatley came off the bench and was a smooth, calming presence in possession. He exited well and got good ground with the boot.

The outside backs did well enough here too, with Goggin and Arnold standing out for me in the physical exchanges defensively. Sweetnam continued his upward curve over the last few games too – he was super solid positionally and won a key high ball for a penalty advantage in the second half.

A really decent outing for these lads.

I thought Brian Scott had a physical outing here. His scrummaging was up and down but that’s got a lot to do with bouncing from one side of the scrum to the other. He was scrummaging on the tighthead side last week and starting at loosehead here but he’s a really good prospect. His maul defence stood out to me in the first half in particular – he’s a real powerhouse.

Niall Scannell had another good outing as he builds game time in the aftermath of an injury bedevilled season. He doesn’t have the kind of razzamatazz that Rhys Marshall brings but he’s just as effective when it comes to the nuts and bolts of the position.

His offensive and defensive scrummaging was excellent here, and he showed good power on attacking rucks and in contact on both sides of the ball.

Stephen Archer and John Ryan combined well in this game too. Ryan offers defensive mobility, aggressive scrummaging and dynamic carrying while Archer offers a heavier option in the maul, lineout with solid work in the scrum.

Gerbrandt Grobler, Billy Holland and Peter O’Mahony worked well in the lineout and on maul defence while constructing some excellent pressure on our throw. Their work in the breakdown grew in significance during the game.

Jack O’Donoghue and Robin Copeland had busy outings in defence and their mobility through the defensive line was really important. Both carried well and brought the kind of aggressive physicality that has been noticeable over the past few weeks.

JJ Harahan didn’t have a massive impact at 10 in open play but he grew in influence for me once he stepped back to 15. His defence, work in transition and goal kicking were excellent. His goal kicking, in particular, was vital in getting Munster back into the game.

Dave Kilcoyne came off the bench in the 44th minute and was an aggressive, powerful presence in the loose and in the set-piece. His energy and niggle was vital as the heat went up in the contest. No better man, you’d have to say. His scrummaging was vital in the endgame too, and he looked like a guy who is hitting form at the right time.

Rhys Marshall had a cracking game off the bench. He was a real jolt of energy here and made two or three huge plays that helped tip the scales Munster’s way. He got cracked with a shoulder to the gob too but handled it with the kind of abrasiveness we’ve come to expect from this guy. A quality player.

Conor Murray is probably the best scrumhalf on the planet right now. You could argue that he’s the best back, full stop, but that’s an argument for comment sections. What is for certain is that there are few players in the world that can shape a game like Murray can and he proved that again here with the kind of smooth excellence that you’d expect from a genuinely world-class player. Oh, and he can kick goals from halfway now too. What can’t he do?

I’ll be covering Munster’s work in the lineout against the Cheetahs and their defensive changes since the addition of JP Ferreira on TRK Premium this week. I’ll also be building towards the semi-final for Blood & Thunder Week #2.

You can access it all for just €2 a month.